Burkina Faso has experienced sustained economic growth between 1990 and 2013. Indeed, growth became more robust and more resilient to chocks, resulting in the economy growing faster than regional standards. However, the perception within the country is that the population hasn’t really benefited from this strong performance and that growth was not inclusive. Indicators show that results are actually mitigated. The improvements can be attributed to the authorities’ numerous measures on the matter but there are still some identified constraints that must be resolved in order to truly tackle the problem of poverty in the country.

A. Growth in Burkina Faso

1. Burkina Faso has experienced sustained growth in the past decade. Although this is true for many countries in the region, Burkina Faso is one of the few non resource-rich low-income countries that have been able to achieve high growth over a long period. The Regional Economic Outlook for Sub-Saharan Africa of October 20132 identifies several key characteristics common to these countries–Burkina Faso, Ethiopia, Mozambique, Rwanda, Tanzania, and Uganda–improved macroeconomic management, stronger institutions, increased aid, and higher investment in human and physical capital.

3. Real GDP growth averaged 5.9 percent between 2000 and 2013. Between 1990 and 2013, real growth has become more sustainable and less volatile (Text Figure 3). The five-year average went from 3.0 to 6.4. During the same time, the standard deviation of the five previous years declined steadily from 3.8 to 2.5 percent, demonstrating a decline of the volatility of growth. The resilience against weather shocks is the result of investment in irrigation technologies as well as the increased use of genetically modified cotton seeds. Also, the primary sector share of real GDP has declined from 33.7 in 1995 to 28.0 percent in 2013, decreasing the impact of primary sector shocks on the total activity.

4. Despite the emergence of industrial gold production, the share of the secondary sector to real GDP has remained constant since 1995, at about 20 percent, reflecting the lack of capacity to generate higher value added activities. The sector is mainly driven by industry (food processing, textiles). The mining sector’s share increased from 0.5 percent in 1995 to 4.3 percent in 2013. In order to better track sources of growth and structural transformation, the authorities are in the process of updating the base year to 2015, starting with a survey to better capture informal sector activity.

B. Inclusiveness of Growth in Burkina Faso

5. In Burkina Faso and among donors, the perception is that poverty reduction has been too slow. The authorities’ official statistics measuring poverty incidence (defined as 20 US cents per day in 1994, growing to 60 cents in 2009) haven’t improved since 1994, remaining around 45 percent. Urban poverty even increased during the period as the share of people living in urban areas almost doubled, from 14 percent in 1990 to 25 percent in 2009 (Table 1). The level of the authorities’ poverty line has more than tripled over that period. Inflation-adjusted, the poverty line has almost doubled (from $0.6 per day to $1.1 per day) and is now comparable with the poverty line used by the Word Development Indicators.

6. The perception of a lack of inclusive growth in recent years has been exacerbated by a boom in gold production. Whereas cotton accounted for 80% of exports and gold production was non-existent a decade ago, gold now accounts for almost 80% of exports. However, its main channel of impact on the economy is fiscal revenues, but investment and spending capacity constraints have limited the extent to which these revenues have translated into additional development spending. Recent studies show that less than 10,000 Burkinabè work in the industrial mines, where they usually fill unskilled labor and low-wage positions. Foreign enterprises provide most of the services to the mines. Together, these factors have created a public perception that progress in reducing income poverty has been too slow, with the population at large excluded from the benefits of high growth and the gold sector boom.

7. However, other indicators suggest a more mixed picture about inclusive growth in Burkina Faso. The World Bank’s measure of the poverty headcount ratio demonstrates that the share of the population living under the $1.25 per day threshold, calculated at 2005 prices, was significantly reduced since the early 1990s, from 71.17 percent, to 44.6 percent in 2009 (Text Figure 4), on a par with other west African countries.

8. The income share held by the wealthiest 10% of the population has decreased since 1990. The income share held by the poorest 10% of the population increased slightly, but remained under 3% (Text Figure 5). These figures suggest that income gains have benefitted those in the middle. The GINI index supports the hypothesis of better wealth distribution, decreasing from 50.7 in 1990 to 39.8 in 2009. It remains higher than WAEMU average (Text Figure 6).

9. Burkina Faso’s population growth rate has been very high, around 3 percent. The population growth rate averaged 2.9 percent between 1990 and 2012, triggered by substantial decreases in mortality levels, while fertility levels remained constant (Text Figure 7). Mortality decreased owing to improvements in health care and services, as well as hygiene and sanitation. As a result, in 2006, 46.4 percent of the population was 14 years old or younger (SSA average, 43). Around two-thirds of the population was 25 or younger. The rapid demographic growth makes it more difficult to reduce income poverty ratios and puts further demand on public resources for social transfers. Moreover, the rapidly increasing population creates challenges for job creation and puts more pressure on the need for sustained high growth.

10. Despite rapid demographic growth, World Development Indicators show notable improvements in living conditions in the country. Besides the reduction of poverty headcount ratio described above, health-related indicators have shown good progress and have reached regional standards. However, education-related indicators have not progressed as well. Despite improvement, they remain lower than SSA averages and primary school enrollment is far from the 2015 target of 100 percent (Text Figure 8).

11. The country’s Human Development Index (HDI) remained below regional standards (Figure 1). In health, Burkina Faso’s specific HDI is higher than WAEMU and SSA averages, but below low-income countries (LICs). In terms of public expenditure in health, the country spends more in percent of GDP than both WAEMU and LIC averages. Again, education shows the least pronounced progress, and spending is below WAEMU and SSA averages.

12. The progress in poverty reduction and growth inclusiveness has been supported by numerous measures and projects undertaken by the Burkinabè authorities. The strategy for accelerated growth and durable development (SCADD) is a framework of measures aiming at reducing poverty while insuring economic stability.

13. Improvement of the resilience of the primary sector to weather shocks. For instance, irrigation, increased use of GMO cotton seeds, and more crop rotation have led to greater productivity and improved resilience to weather shocks. Other measures in the cotton sector, such as the provision of subsidized inputs and an income support scheme, have led to more stable incomes in rural areas where poverty is concentrated.

The Strategy for Accelerated Growth and Sustained Development (SCADD) sets out economic and social policies to support broad-based growth, sustained poverty reduction, and progress towards the MDGs (MEFP, ¶14). At its outset, it was estimated that full implementation of the strategy—disregarding capacity or financing constraints—would be around US$ 15 billion. The strategy follows 4 main axes:

Taking into account capacity and financing constraints, the strategy sets interim targets to assess implementation progress. Two-thirds of 2013 measures or indicators were implemented or met, notably feasibility studies for three new growth poles, implementation of special export zones, and launching of a new household survey. However, some areas are lagging, e.g. more use of private sector partnerships, implementation of a rural strategy, youth employment action plan, an anti-corruption law and judiciary reforms.

Establishment of a universal health insurance scheme aims to cover 50 percent of the population by 2025, at a cost broadly estimated at 2 percent of GDP. Other health projects in the short run aim to hire health care professionals, establish facilities, and assure free healthcare for children under 5 (20 percent of the population). The 2010–20 education strategy plans to hire 3700 teachers per year, build or renovate existing classrooms and buy textbooks, with a goal of 100 percent primary school enrollment by 2021, at an additional cost of 2 percent of GDP per year.

During the second phase of the SCADD (2014–16), the strategy will focus on priority measures including:

14. As reflected in the main axes of the current ECF-supported program and despite the improvements, much remains to be done to achieve a more inclusive growth. The main identified constraints are:

15. In the report Burkina Faso, Competitiveness and Diversification,4 the World Bank identifies 3 main factors that are crucial to inclusive growth: human, physical and financial capital. In terms of human capital, aside from education, the paper identifies unabated population growth in Sub-Saharan Africa as a major obstacle for achievement of its development goals, and argues that dealing with population growth should be a higher priority. The paper notes that closing the infrastructure gap is necessary to sustain more inclusive growth, especially in energy and transport. Finally, the report calls for improved access to financial services, explaining that small and medium enterprises have little access to financial services and aside from cotton, there is little credit available for agriculture. The World Bank’s Doing Business indicators also show that Burkina Faso’s weaknesses are in the sub indicators: “getting electricity,” “trading across borders and “getting credit” (Figure 2). The overall Doing Business index has increased over the years, although it dropped in the rankings to 154 in 2014, compared to 149 in 2012 (out of 185). 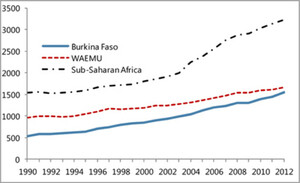 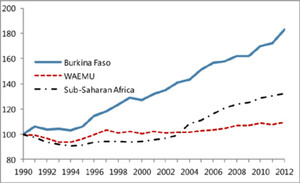 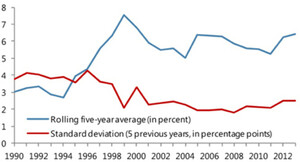 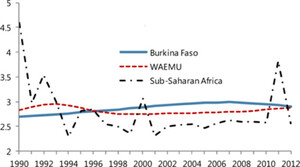 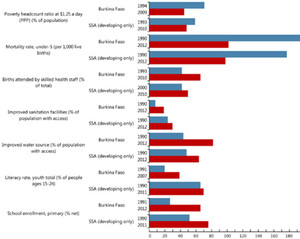 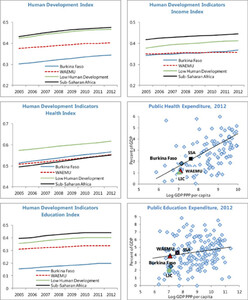 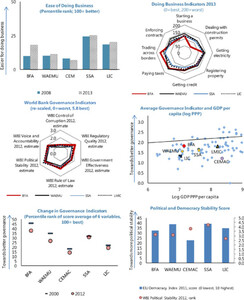