This chapter seeks to explain why foreign ownership of locally issued sovereign bonds is so low in Chile and its implications. The low foreign ownership seems to be the result of a combination of macroeconomic, regulatory, and technical factors.

1. Chile has substantially opened up its capital account since 1999 including on foreign portfolio investments (Carrière-Swallow and García-Silva, 2013). Capital market reforms in recent years sought to promote the development of Chile’s financial market and its integration into the international financial system. Foreign banks (foreign ownership more than 50 percent) account for close to 40 percent of the banking sector. The Chilean authorities also introduced new measures in April 2011 to facilitate bond issuance by foreign corporates in Chile (dubbed “huaso” bond).2 In 2013 Banco de Chile (Citi) first introduced global depository notes. Inflows were strong initially, totaling US$900 million in April/May, but subsequently quieted down.

2. However, foreign ownership of domestically issued sovereign bonds is still very low in Chile. Foreign ownership of locally issued public debt is only 2 percent in Chile (Central Bank of Chile, 2013).3 This is extremely low compared with other emerging markets, e.g., 37 percent in Mexico and 60 percent in Peru.4 This chapter focuses on sovereign bonds, but foreign ownership of locally issued corporate bonds is estimated to be also very low. This is perplexing because when the Chilean government or Chilean companies approach the overseas markets, there is always strong demand. Foreign share of equity market capitalization is also low, estimated at 5 percent, although nonresidents account for about 20 percent of stock market trading volume (OECD, 2011).5

3. This chapter seeks to shed some light on the reason for the low foreign ownership of local bonds. To the best of our knowledge, there have been no comprehensive studies on the subject. The most recent Financial Stability Report (Central Bank of Chile, 2013) discusses the issue, and points to the tax on capital gains, costs for custody of securities and other administrative costs, and the relatively small size of the sovereign bond market as the reasons. Our study also finds that a combination of factors contributed to the low foreign ownership, including a moderate supply of sovereign bonds shadowed by strong local demand, illiquid secondary market, tax and administrative burden, the dominance of inflation-indexed bonds, and inconvenience and potential risks associated with foreign exchange transactions. The remainder of the chapter is organized as follows: Section B discusses possible factors of the low foreign ownership; Section C touches upon its implications; and Section D provides some concluding remarks.

4. The market is relatively small while the demand for government bonds from local institutional investors is high. Chile’s gross government debt is low, standing at only 12 percent of GDP as of June 2013 (the government has net assets), and locally issued government debt is even smaller at about 10 percent of GDP. The central bank also issues bonds whose yields are similar to those of government bonds. Central bank debt amounts to about 10 percent of GDP as of June 2013. Chilean pension funds are large (with assets equivalent to 60 percent of GDP) and the most important investor of sovereign bonds. They hold about two-thirds of government bonds—as much as three quarters of inflation-linked government bonds—and half of central bank bonds. Although Chilean local bonds are included in the major global benchmarks (like Barclays), its share, at about 0.35 percent, is small. International investors would need to weigh the benefit from a small market against the fixed costs of investing in Chile.

5. Nevertheless, the yields for Chile’s sovereign bonds are reasonably good. This is particularly the case when controlling for the perceived low risk of Chilean sovereign bonds. For example, although historically Chile’s 10-year government bond yield was often lower than that of Mexico, Peru, and Colombia, it was actually higher as of May 1, 2013 for both the nominal and inflation-indexed bonds (before the emerging market bond market turmoil), even though Chile has higher credit rating and lower credit default swap spread.6 This suggests other important factors (instead of yields) in explaining the low foreign ownership of local bonds.

Note: Ratings are for local currency long-term bonds, and CDS is for dollar bonds.Source: Bloomberg.
Table 2.

Note: Ratings are for local currency long-term bonds, and CDS is for dollar bonds.Source: Bloomberg.

6. The secondary market is illiquid and opaque. Local pension funds typically buy and hold. As a result, the secondary market is thin, with daily transactions averaging only US$1.6 billion, or about 3 percent of the outstanding stock. Even more importantly, the bulk of these transactions (more than 80 percent) are over-the-counter, where trading is nontransparent and expensive for nonresidents. A liquid and centralized secondary market is very important in attracting foreign investors, who typically make profit through trading. While many other emerging markets also have illiquid secondary market with mainly over-the-counter trading, the dominance of inflation-indexed bonds may make it a more acute problem in Chile (see the next paragraph). The relatively low volatility of Chilean sovereign bonds may have also discouraged opportunistic international investors seeking higher yields and volatility.

7. The dominance of inflation-indexed (UF) bonds in Chile also has deterring effects on foreign investors. UF bonds account for about 70–80 percent of government bonds outstanding and 70 percent of central bank bonds. Unlike local pension funds, international investors do not have liabilities indexed to Chilean inflation, and would prefer nominal bonds instead of UF bonds. The dominance of UF bonds essentially reduces the (relevant) local market size for them substantially.7

8. The capital gains tax could have also reduced foreign investment in local bonds. Until recently, foreign investors were subject to a 35 percent capital gains tax on fixed-income instruments traded over-the-counter, which is where the bulk of the trading happens. Transactions of fixed income instruments traded on a stock exchange were exempted from the tax. The Single Funds Act, which came into effect on May 1, 2014, abolished the capital gains tax for over-the-counter transactions and equalized their treatment with stock exchange transactions. The law also expanded the range of government and central bank instruments eligible for tax exemption, allowing instruments issued prior to 2010 to benefit from the new tax treatment. This expanded the eligible instruments by some 25 percent of the outstanding stock of government and central bank bonds.8 The new legislation effectively eases the access for foreign investors to the local government bond market.

10. There is also an administrative burden for nonresidents to purchase local bonds. Registering an account in Chile to purchase local bonds takes about six months (Bloomberg, 2013). Although one could argue that this is a one-off cost and should not be a barrier, anecdotal evidence suggests that it is an impediment to international investors.

11. Higher foreign investment in the local bond market could help further develop domestic financial market and lower bond yields. The financial market in Chile is already quite well developed and indeed the low foreign ownership in the bond market is among the few “last frontiers” for financial liberalization and development. Also, low government debt results in small government interest payments. However, foreign ownership could also be a mixed blessing. For example, Ebeke and Lu (2013) find that although foreign holdings of local currency government bonds in emerging markets lowered bond yields, they have increased yield volatility somewhat during the post-Lehman period.

12. The low foreign ownership of local bonds may have helped shelter Chile’s bond market from the emerging markets bond sell-off amid the Fed’s tapering talk. During May 1 to June 25, 2013, the yield on Chile’s locally issued (peso) sovereign bond only increased slightly while the increase for other countries in the region was much larger. An important reason could be the very low foreign ownership of local bonds in Chile. This can be confirmed from the much larger yield increase for Chilean sovereign bonds issued internationally, for both dollar and peso bonds.10

13. The low foreign ownership of Chilean local bonds seems to be the result a combination of macroeconomic, regulatory, and technical factors. In particular, the small size of the market for nominal bonds, the lack of a liquid secondary market, the previous tax regime and existing administrative burden, and transaction costs in the foreign exchange market seem to be the main reasons. Tackling (some of) these issues could help increase foreign ownership, which could help lower financing costs for the government and corporates. However, the low foreign ownership helped insulate Chile from the recent worst sell-off for emerging markets local debt in four years. With the normalization of monetary policy in advanced economies, high foreign ownership of sovereign bonds is now considered a vulnerability, and one may wonder whether pursuing a policy to increase foreign ownership in local bond markets is necessarily an optimal move at the current juncture.

New criteria allow companies constituted in countries with at least three sovereign ratings to issue huaso bonds, although only a handful of borrowers have tapped this asset class.

The figure for Chile is for the third quarter of 2012 and refers to foreign ownership of sovereign debt, which are dominantly bonds, as foreign investors hold little treasury bills.

Chile’s equity market is large compared to others in the region; however, the equity market has remained rather illiquid, as the pension funds act largely as buy-and-hold investors, and much of Chile’s corporate sector is dominated by large conglomerates with correspondingly low float ratios (OECD, 2011; IMF, 2011).

The difference in yields was also unlikely driven by exchange rate factors, as there was no expectation of trend deprecation of the Chilean peso vs. the other currencies.

Nonetheless, as UF bonds dominate the market, foreign investors are more likely to invest in them rather than in nominal bonds.

See http://www.hacienda.cl/english/public-debt-office/new-article-104.html for a detailed discussion of the Article 104 tax regime for fixed income instruments under the Single Funds Act. Huaso bonds are also subject to the new treatment.

CLS is a bank-owned institution that was launched in 2002 to eliminate settlement risk, one of the biggest dangers in the foreign exchange market. The Chilean peso ranks 28th among most traded currencies in the world (BIS, 2013).

Although the yield for the Chilean peso bond issued internationally rose only moderately, it already rose 87 basis points (bps) during February and April when the international market was rather quiet. The bulk of Chile’s externally issued government bonds is in U.S. dollars, except for the $500 million peso-linked bond issued in 2011 (in New York). 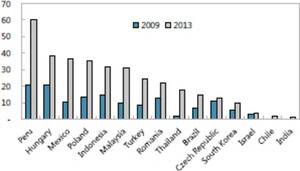 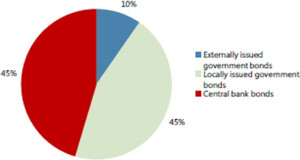