Although the wage bill is not particularly high, its sectoral composition has changed significantly, and recent hiring is likely to add pressure to public expenditure. The growing size of the civil service could threaten a sustainable wage bill and effective public service delivery.1

1. The public wage bill and the civil service framework provide valuable insights into the options and constraints to effective public service delivery. The hard-to-reverse nature of decisions related to the civil service, and recent hiring plans have motivated this analysis. Among the developments are the Government’s decision in 2012 to hire 25,000 as part of its job creation plan, and a planned security personnel expansion.

B. Determinants of the Public Wage Bill and Civil Service

Size and Composition of the Public Wage Bill

2. The wage bill grew steadily between 2006 and 2012. It rose from 4.5 percent of GDP in 2006 to 5.2 percent of GDP in 2012. It ranked among the highest for the Central Africa Economic and Monetary Community (CEMAC), but is not particularly high compared to other sub-Saharan African (SSA) peer countries (Figure 1). Moreover, it hovered around 40 percent of current expenditure (Figure 2), comparable to the average weight of the wage bill in peer countries.

Cameroon: Structure of the Civil Service

The first category of government employees is regulated by the General Statute of the Civil Service; the second falls under the Labor Code; and the last two are governed by special statutes related to their trades.

Size of the Civil Service

3. The size of the civil service increased at a brisk pace between 2006 and 2012. The number of civil servants grew from 167,000 to 250,000, equivalent to a 6.9 percent yearly increase, while the population is estimated to have grown on average by 2.5 percent (Box 2). This trend accelerated in recent years (Figure 4). The bulk of the civil service increase happened through positions filled by contractual workers (79.5 percent). These contractual workers comprised mostly (i) locally hired teachers who were incorporated into the civil service; and (ii) part of the 25,000 young people recruited between 2011 and 2012 under a program to promote youth employment. By comparison, regular civil servants contributed 8.5 percent of the overall increase, and uniformed personnel, 6.5 percent. Appointees contributed the remaining 5.5 percent. By 2012, regular appointments comprised less than half of all civil servants.

All sectors contributed to the staffing increase, but education was the most important driver. The number of positions in education rose from 37 percent of all positions to 46 percent (Figure 5). Most new positions in education were for teachers hired as contractuals in primary education.3 In health, the number of positions grew at 6.8 percent a year (close to the civil service average) from an initial low level of 10,363 to 15,399. Staffing in security grew modestly by less than 1 percent a year, albeit from a base of 51,551 positions in 2006. In relative terms, the share of security shrank from 31 percent of the civil service in 2006 to under 22 percent in 2012. There has been a shift toward more uniformed personnel, who now comprise almost three quarters of all security staff.

6. The ratio between highest and lowest4 individual wage is relatively low (around 6), but adequate to establish a meaningful incentive structure. Such a “compression ratio” should typically be higher than 4 to help contain corruption in the civil service, but not higher than 14.5

Competitive examinations (“concours”) are launched almost every year for non-contractual civil servants, based on predefined recruitment plans. Eligible candidates must be between 17 and 35 years of age. Successful candidates undergo one to seven years of training in the government’s specialized higher schools. A newly recruited staff member is subject to a probationary period of one year during which he or she must confirm his or her professional ability to perform the assigned duties. In case of an unsatisfactory internship, the civil servant is dismissed after notice. A civil servant can also be fired by the Disciplinary Board of the Civil Service for insufficient results or a disciplinary offense, although this is rare.

Movements between civil service categories are infrequent by design, as each employee is expected, in principle, to stay in his trade. However, line ministers can decide to transfer employees under their authority in the ministry’s various offices throughout the country. The positions of director general, secretary general of ministries, and equivalent positions are appointed by presidential decree, while the Prime Minister appoints directors and technical advisors to ministers. Ministers appoint heads of services and lower positions. Promotions are based on staff qualifications and results, although there remains scope for patronage.

Exit from the civil service can happen through dismissal, revocation, retirement, death, or resignation. A decree of 1974 set the retirement age in the non-uniformed civil service at 50 years for sub-categories C-D and 1-6; and 55 years for sub-categories A-B and 7-12. Several adjustments have occurred since, setting different thresholds for specific sectors. As a result, retirement age is much higher for judges and academics (60-65 years) and teachers (55-60 years). Since 2012, in the uniformed service, retirement age varies between 48 years (soldier) and 60 years (colonel).

Cameroon: Compensation in the Civil Service

Salaries are based on scales for the different categories of government employees. Base salary increases every two years on a time-in-grade basis, provided performance is satisfactory. A civil servant is also eligible for a step increase, as a result of a specific achievement, as documented by two letters recognizing high performance from the minister.

Four main types of allowances are granted on top of base salary, including (i) a category or trade-based allowance; (ii) those related to administrative function (director, head of department); (iii) housing allowance (except for categories 1-6); and (iv) other various bonuses (technicality, risk, teaching, etc.). Total allowances represent on average 32 percent of the base salary, with differences across trades. Allowances are higher in the uniformed services, magistracy, and higher education (up to 90 percent of base salary in these sectors). In addition, specific allowances apply to selected categories (e.g., allowances for technical ability, water, electricity, and telephone).

7. Two scenarios are presented going forward. The baseline scenario assumes no reform in the public service (Table 2). It further assumes (i) a continued freeze in the wage scales and, accordingly, an average compensation that increases by little more than inflation; (ii) an increase in staffing at about 10 percent a year; (iii) a large increase in the number of regular civil servants and a zero increase in the numbers of contractuals, because as primary schoolchildren graduate, they generate demands on the secondary education system, in which teachers occupy mostly tenured positions, and where the ratio of teachers to students is much lower; (iv) a 50 percent increase in the size of the uniformed personnel rosters by 2019, owing to regional security concerns. Under this baseline scenario, the wage bill rises from over 5.5 percent of GDP in 2013 to 7.2 percent of GDP in 2019—a trend that would put considerable stress on the budget. Under a “reform” scenario, salary increases are somewhat tempered, and significant efforts are undertaken to limit the number of new positions in the regular civil service, while uniformed personnel rosters grow at a slower pace than in the baseline scenario. The reform scenario is consistent with the stable, sustainable wage bill of 5.5 percent of GDP contemplated in the macroeconomic framework of the 2014 consultation.

9. Fiscal sustainability could be jeopardized by a rising wage bill. This is slated to happen if new positions are created at the current pace, and if wages increase faster than inflation, which is more likely after the recent spate of young hires into the civil service.

10. Flexible management of the workforce has been improved by the shift toward hiring more contractuals. However, the size of the contractual contingent has become large and concentrated in one sector (i.e., education), which will require careful management given its importance.

11. The increase in the size of the public service has created new pension claims. While these claims may not result in an immediate expenditure, they are an incurred contingent liability that deserves close monitoring to ensure that the budget steers clear of unprovisioned liabilities in the long term.

12. In the absence of improved revenue performance, a growing wage bill may crowd out other expenditure, such as goods and services. The resulting imbalances in the expenditure mix could compromise the quality of public service delivery. This will be especially important for education, where a growing enrollment in secondary education will test the ability of the government to provide high-quality facilities and teaching equipment.

13. The quality of public service delivery remains a question open to debate. The rapid increase in the number of civil servants does not guarantee that service delivery will meet the expectations of beneficiaries. Specifically, the vast expansion in primary education teachers must meet clear, measurable, and time-bound objectives; requires training of new teachers to contribute to these objectives; and calls for testing to ensure that outcomes are satisfactory. Higher staffing raises expectations of better service delivery that need to be approached methodically.

14. Management of the expanded civil service, especially in education, poses new managerial challenges to ensure effective service delivery. Civil servants need to report for duty, including in less attractive field assignments; absenteeism needs to be monitored and reined in as needed; and the payroll needs to be updated efficiently and effectively to eliminate ghost workers. The drift toward the higher grades of the civil service limits the scope for career progression and may increase frustration and affect motivation.

15. The recent evolution of the civil service calls for closer monitoring of civil service and wage bill developments. While there are no immediate concerns about the sustainability of the wage bill, high and competing demands on government make it an opportune time to consider how to improve the civil service’s contribution to service delivery. It would be useful to launch a task force to assess civil service issues and consider reforms to the civil service framework for better service delivery under the constraint of fiscal sustainability. Options to consider include the development of a medium-term expenditure framework to model the effects of decisions on wages and staffing on public expenditure; the identification of critical positions in ministries, consistent with the efforts of the government to implement results-based program budgeting; the clear association of specific grade levels with certain types of positions to avoid excessive promotions; a continued emphasis on salary increases through merit rather than seniority; and the possibility of creating new grade levels to alleviate pressure in certain grade levels.

The ranks of contractuals in education swelled, as teachers previously financed under a specific French debt forgiveness scheme were integrated into the civil service in 2008. 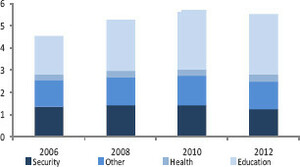 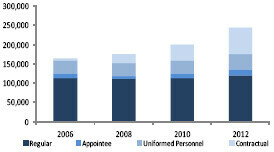