Poverty, Inclusiveness, and the Budget

Poverty in Cameroon has decreased slightly since 2007, but this evolution masks stark divergences between regions, with rural areas in the north showing increases in poverty. Moreover, growth incidence curves point to less inclusive growth patterns. An analysis of budget policy corroborates these findings: it shows declines in allocations to social sectors, an unproductive expenditure mix in education, and a potential crowding out of pro-poor expenditure. The analysis identifies important issues in budgeting and financial management that need to be addressed to make public expenditure more efficient and effective.1

1. Developments in poverty and inequality are difficult to track in Cameroon. Cameroon has not had a household survey since 2007.2 This paper proposes to fill this gap by imputing poverty figures from a proxy survey carried out in 2011, based on established methodology (Box 1).3 The paper further reviews the evolution of expenditure policy since the last household survey to identify areas where policy adjustments could enhance poverty alleviation and reduce inequality.

In the absence of household survey data since 2007, poverty incidence data have been imputed from other sources. National household surveys require significant financial and human resources, and many developing countries lack them to maintain the required frequency. In response, poverty analysts have devised a number of alternative poverty estimation techniques. This paper uses three household surveys collected by the Institut National de Statistiques du Cameroun, two of which include consumption information and can be used to calculate poverty measures, and a third one (a demographic and health survey, DHS), which requires survey-to-survey imputation to estimate poverty. The details of the imputation methodology can be found in a forthcoming working paper of the World Bank, drawing from literature on poverty measurement imputation (Brick and Kalton, 1996); small area estimation (Rao, 2003); and poverty mapping (Elbers et al., 2002). Similar work can be found in Stidel and Christiaensen (2007), Tarozzi (2007), Grosse et al. (2009), and Douidich et al. (2013). Although there are limitations to the imputed data for 2011, the broad findings are robust.

B. Poverty Incidence and Developments

3. The evolution of poverty was consistent with patterns of economic growth. Per capita growth in non-oil GDP was 1.2 percent on average between 2007 and 2011, which was not sufficient to reduce poverty significantly (Table 1). Moreover, while growth in the primary sector was the most dynamic, it also was the most volatile. The variability of agricultural production was an important obstacle to rural poverty alleviation.

4. Poverty levels varied from region to region in 2001–11. Poverty in the South-West Region continuously declined, while it continuously rose in the North Region. Poverty rates in 2011 remained the highest in the North Region, followed by the Extreme North Region. The North Region, saw a small decline in the poverty rate in 2007–11, which nonetheless remained elevated at 62 percent. The Extreme North Region experienced a 10 percent decline in poverty, but more than half of its population was poor in 2011. The largest declines in poverty occurred in the East Region, which experienced a 24 percent decline in poverty (to a poverty level of 38.2 percent); and in the Adamaoua Region, where poverty declined by 37 percent (to a poverty level of 33.5 percent). Other regions, with more modest declines in poverty, included the North-West and South West Regions. There was a substantial increase in poverty in the West Region to 35.4 percent, but this was one of the regions that had shown the largest decline in 2001–07. The capital, Yaoundé, showed an increase in poverty from 5.9 percent to 7.3 percent, while poverty in the largest city, Douala, remained unchanged at about 5 percent.

5. Despite a small decrease in poverty as a percentage of the total population, the number of poor living in Cameroon increased in 2007–11. High fertility levels, particularly among poor households, as well as internal migration, meant that certain regions had increases in the population living in poverty even if the percentage of poor declined. For example, despite a percentage decrease of the poor population, there were almost 350,000 and 140,000 net additional individuals living in poverty in the North and Extreme North Regions in 2011 compared to 2007, respectively (Figure 2).

6. Real per capita consumption growth was close to zero in 2001–07, consistent with the limited progress in poverty alleviation. The annualized real per capita growth rate was essentially flat, at 0.6 percent. However, a more detailed analysis shows a slightly pro-poor development in rural areas and the two major cities. The bottom 10 percent of the country’s population experienced growth rates above the mean, and the top five percent had growth rates slightly below the mean (Box 2; Figure 3). The higher growth rate for the lowest percentiles was driven by growth among the poorest in rural areas. In contrast, the relative decline in growth at the top percentile was driven by lower growth rates in Yaoundé and Douala. The mean growth rates were close to zero in the major cities, other urban areas, and rural areas: 0.3 percent, 0.1 percent, and 0.1 percent, respectively. The median growth rate in Yaoundé and Douala, however, was higher at 3.0 percent.

7. Growth in 2007–11 was more regressive than in the previous period, with the bulk of the growth dividends accruing to the wealthiest people. The national median growth rate was just below one percent, but the mean rate was at 3.5 percent, indicating higher growth rates for the upper percentiles. Below the 40th percentile, the growth rate was at or just above zero, which indicates that the well-being of the poor hardly changed. The regressive nature of the growth was also evident in the disaggregated analysis. In Yaoundé and Douala, while the bottom quintile had negative overall growth, the top quintile had 5 to 12 percent growth. In other urban areas, the mean and median growth rates, at 4.0 and 2.5 percent respectively, were lower than in the major cities, but growth was positive across the distribution of the population. In rural areas, the median growth rate was -0.25 percent, with net positive growth only for the top quintile. As a result, inequality likely increased substantially in 2007–11, because the national growth rate increased faster for higher percentiles of the distribution.5

8. Cameroon’s expansionary fiscal stance in 2009–11 did not reduce poverty. The fiscal balance turned negative in 2009, and widened to 3.2 percent of GDP in 2011 (Figure 4). This was the result of falling oil revenue and an expansion in expenditure. The expansionary fiscal stance achieved only a marginal reduction in the percentage of the poor, but did not reduce the headcount of the poor and did not achieve a more equitable wealth distribution, partly because of the composition of public expenditure. Public expenditure is examined below for its strategic consistency with poverty reduction and its sustainability for social spending.

9. The government’s poverty reduction strategy6 emphasizes infrastructure and human capital development to broaden the participation of the work force in the economy. Budget execution figures for 2008-12 indicate that the decision to develop infrastructure led to an increase in the domestic investment budget (by 2 percentage points of GDP), consistent with the high upfront cost of infrastructure (Figure 5). Current expenditure remained broadly constant at slightly less than 9 percent of GDP.7

10. The policy intent to strengthen human capital did not lead to higher public spending in the social sectors. Allocations for education declined somewhat, with some volatility in 2008–12 (Figure 6). Although 7,435 teachers were hired in primary education and 3,896 classrooms were built, spending for education fell from 3.6 percent of GDP in 2008 to 3.1 percent in 2012. Allocations for health suffered a more pronounced decline. Other departmental allocations, excluding security, increased from 6.4 percent of GDP in 2008 to 6.7 percent of GDP in 2012. Additional spending outside ministerial departments (e.g., decentralization, pensions, and transfers to public enterprises, including on fuel subsidies) also increased by more than 1 percentage point of GDP.

11. Budget allocations are misleading. Spending on fuel subsidies in the budget is understated by around 2 percentage points of GDP at current international oil price levels, because of cross cancellations of subsidies against taxes. Eliminating fuel subsidies could allow social sector funding on par with 2008 levels. Additionally, as the benefits of fuel subsidies largely accrue to vehicle owners, redistribution of this funding could lead to more pro-poor growth outcomes, the more so that the rural poor does not benefit much from this subsidy.

12. Spending on the social sectors was lower than in peer countries by a significant margin. According to the World Development Indicators, Ghana, Senegal, and Tanzania consistently spend more than of 5 percent of GDP on education. The same countries allocate a minimum of 2.8 percent of GDP to spending on health, more than twice the amount of Cameroon. One of the leading health policy effectiveness indicators correlates closely with this imbalance: the maternal mortality ratio for Cameroon was 690 for 100,000 births in 2010, whereas it was 350 for Ghana, 360 for Senegal, and 460 for Tanzania.

Social sector spending sustainability could be jeopardized by future pension liabilities. Pensions are a significant threat to social spending sustainability and could lead to a crowding out of pro-poor expenditure over time. They reflect commitments under a pay-as-you-go (i.e., not capitalized) pension system that has not yet reached demographic maturity. The public wage bill is also set to expand in future years (see Chapter IV). Signs of strain are already showing: every year, budget allocations for the payment of pensions are significantly over-run by an increasingly wide margin (Figure 7).

13. An adequate provision of basic social services (e.g., basic education, primary and secondary healthcare) matters for development. While specific technical recommendations in these sectors lie beyond the scope of this report, certain budgetary figures point to imbalances that need to be corrected. A debate about these issues should not be delayed, because meaningful adjustments to the budget are underpinned by policy decisions, the impact of which will take time to materialize. Based on the previous findings, the following recommendations can be made.

A new household survey is expected to be launched in late 2014.

The poverty threshold is the adult-equivalent, per person income of CFAF 738, which corresponds to the 2007 price of a basic basket of goods.

The DHS and the household surveys have different definitions of “urban” and “rural.” The sampling frame used in Cameroon divides districts into three types: urban (population more than 50,000 people), semi-urban (population between 10,000 and 50,000), and rural (population below 10,000). The DHS considers urban and semi-urban areas as urban, while the household surveys keep the three categories separate. For comparability, this paper uses the DHS definition, as it is not possible to recover the lower disaggregation of data. This definition yields an urbanized population of 43.0 percent in 2001, 44.0 percent in 2007, and 47.5 percent in 2011. In addition, this paper occasionally separates the urban population into those living in the main cities of Yaoundé and Douala, and those living in other urban areas.

The imputation methodology employed here attenuates the extremes of the distribution and therefore it is not possible to calculate the GINI coefficient or other standard measures of inequality.

Figures may differ from those quoted in the companion staff report owing to limited coverage of externally financed investment in the available data, and a different definition for “current” expenditure. 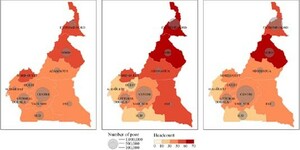 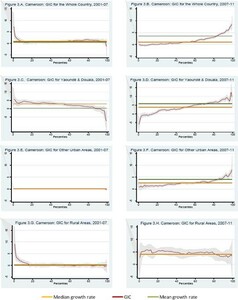 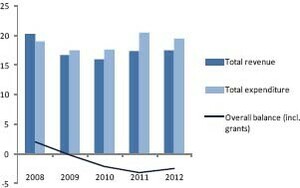 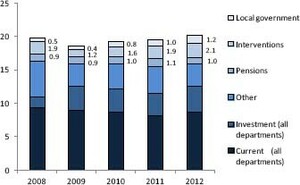 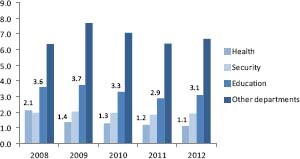