Stylized Facts on Innovation and Growth1

Total Factor Productivity (TFP) has been a prime driver of Finnish growth, but it has contracted recently. The low or negative TFP growth since the financial crisis has coincided with a slowdown in innovation and patenting activity—in part explained by Nokia’s decline. This paper discusses various policy challenges the government is facing in promoting innovation, and presents some evidence on the transformation taking place in the Finnish innovation space.

1. The strong Finnish recovery following the sharp collapse in output in 2009 is losing steam. Though Finland experienced a sharp contraction in 2009, the economy responded with a strong recovery in 2010–2011. However, the recovery has lost steam since and now clearly falls short of the pick-up in the mid- 1990s, when Finland emerged strongly from the banking crisis on the back of significant structural reforms.

2. In the past Total Factor Productivity (TFP) has been a prime driver of Finnish growth. A decomposition of contributions to GDP growth suggests that total factor productivity played a key role in Finland, when compared to other advanced countries, while labor input had negative contributions, partly reflecting an ageing population with relatively low net inflows of migrants. The share of total factor productivity relative to average annual growth over the period 1985–2010 was the highest in OECD at 81.9 percent.

3. Low or even negative TFP growth is behind the poor growth performance since 2008. The recent negative contribution of TFP is unusual in the recent history of Finland. Over the period 1977–2007, Finland only experienced a negative contribution of TFP to value added growth twice. This suggests that an understanding of the recent contraction in TFP could add to an understanding of Finland’s future growth prospects.

4. In 2011–2012, TFP growth contracted in several key industries—manufacturing, construction, information and communication and real estate. The industry-level analysis suggests that the TFP contraction is not limited to a single industry (or firm), but a broader phenomenon. Nevertheless, the contraction in some key industries such as manufacturing and construction is noticeably large.

B. Innovation Activity and Patenting

6. Deviating from the European Union trend, patent grants to Finnish innovators have been contracting since 2007. Applying for a patent makes an invention public, but at the same time gives it protection. A count of patents is one measure of a country’s inventive activity and also demonstrates its capacity to exploit knowledge and translate it into potential economic gains. In this context, indicators based on patent statistics are widely used to assess the inventive and innovative performance of a country. One problem with patent data, however, is that there is often a large heterogeneity in patent value. Therefore, researchers often study patent applications in foreign jurisdictions (e.g., the United States) since there is an additional fixed cost associated with making such applications, thereby partially refining the set of patents under study. Finland’s growth in patent grants at the U.S. Patent and Trademark Office (USPTO) have closely tracked or outpaced the European Union average since 2000. However, since 2007 this relationship appears to have broken down with patent grants to Finnish innovators contracting faster than the European Union average.

9. Given complementarities in innovation activity, Nokia’s decline may hurt the aggregate innovative activity in the system. A strand of academic research suggests that the presence of a large, local, R&D-intensive firm—an “anchor tenant”—enhances the regional innovation system, by stimulating local research and innovation by universities and other firms (Agrawal and Cockburn, 2003). The classic example of an anchor tenant is the large department store in a retail shopping mall that creates demand externalities for the other shops. In the context of regional innovation, a large firm heavily engaged in R&D, by virtue of participation in local markets for technology and specialized inputs, creates significant externalities for smaller innovative firms. These externalities may facilitate entry by smaller firms seeking to utilize university research, lower their costs, and improve their prospects for future profitability and growth. Such an active presence of a fringe of smaller firms increases the impact of vertical knowledge spillovers in the local economy, beyond the direct effect of the anchor tenant. Over the last two decades Nokia served as such an anchor tenant, by being a driver of innovation activity.

10. However, with Nokia destined to play a less important role in the future, innovation activity will likely come from younger and smaller firms. Since Nokia’s decline, no clear alternate anchor tenant has emerged. While this may be adversely affecting the innovative activity in the system, the implication is that others will have to step up. Indeed, there is an ongoing discussion in the academic literature suggesting that even though larger firms offer economies in scale in innovation, these tend to be more incremental and less disruptive in nature. In contrast, smaller and younger firms might be the ones opening new fields of business—not unlike Nokia in the 1990s (see, for example, Reid and Nightingale (eds.), 2011, and Cincera and Veugelers, 2013).

11. In principle, a reduction in Nokia’s R&D activity in Finland could open up opportunities for other—but this may take time. Employees that have left Nokia recently have mostly moved to older firms suggesting that the spillovers from Nokia’s decline may not lead to a burst of startup activity. Utilizing a Finnish linked employer-employee database (FLEED), Pajarinen and Rouvinen (2013) find that about 15 percent of employees leaving Nokia have joined a firm that is less than 2 years old (conditional on remaining in private sector employment). By contrast this number was close to 64 percent between 1989–1994. In 2008–2010, close to 48 percent of the employees leaving Nokia joined a firm that is greater than 11 years old, suggesting an absence of a great shift towards innovative activity in young startups. We may observe a reversal of trend since 2010, but will have to wait for newer data to become available to confirm this conjecture.

12. If the decline in TFP and innovation activity are part of structural changes in the Finnish economy—as the preliminary evidence indicates—a strong policy response will be needed to boost potential economic growth. The government has launched various programs with the aim of enhancing economic growth through investments in early-stage technology companies. The 2014 Spring Budget Review states that the combined capital of such growth funding programs (government support plus investment received through private funding) may increase to around EUR 1 billion (or about 0.5 percent of GDP). While the strategy to target government programs to support small firms, innovative activity, and entrepreneurship may be well-placed, the absence of evidence of strong startup and patenting activity suggests that further streamlining the programs may prove fruitful. Also, since several industries have experienced a contraction in TFP and a decline in reported innovation activity, it is likely that a comprehensive set of policies may be required—for example, by making more effective use of R&D tax credits, better aligning research grants with performance, and improving the design of pre-seed and seed stage policy schemes (Luukkonen, 2010). This may also be an opportunity to reduce the reliance of the economy on the ICT sector and stimulate innovation in other sectors as well. As the cross-country experience suggests, creating a successful innovation policy framework remains a highly challenging task, and further refinements should focus on both the design and the effective implementation of programs (Lerner, 2009). 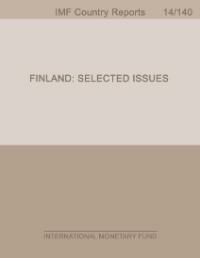 Patents Grants at the U.S. Patent and Trademark Office, Relative to 1999 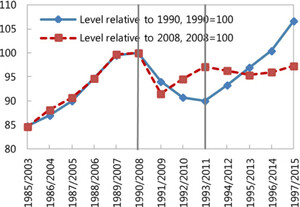 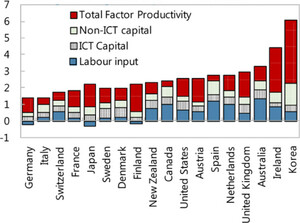 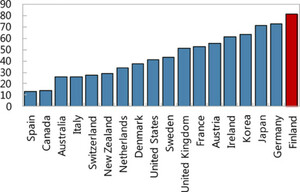 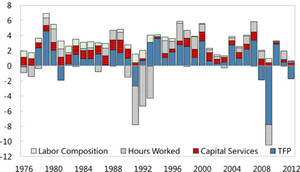 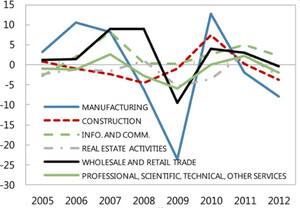 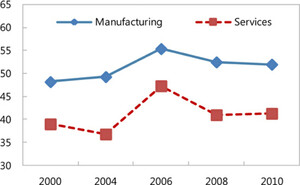 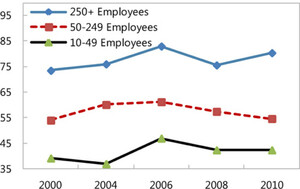 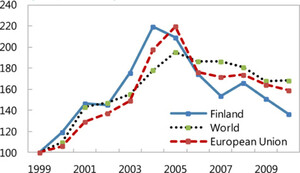 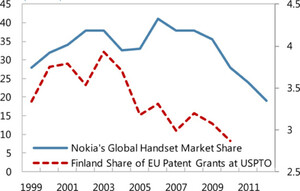 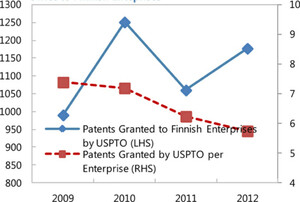 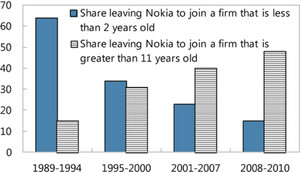 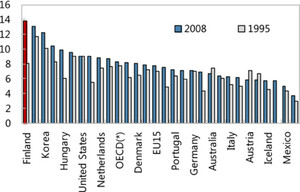