1. The Baltic countries form a distinct group within a tightly integrated Nordic-Baltic region. However, they differ from the Nordics because of the challenges they faced upon regaining independence, with large differences in income, institutions, infrastructure, and other physical capital, notwithstanding the strong historical links with Nordics.

2. The Baltic countries also stand apart from their transition peers. Both groups came under central planning in the Soviet era. However, countries such as Poland, the Czech Republic, Hungary or Slovakia had a greater degree of autonomy and more institutional continuity before 1991. Because the Baltics reestablished independence much more abruptly, they entered the transition with the advantage of being able to create new institutions from scratch but also with the disadvantages of a more disruptive start to transition.

3. This chapter describes what sets the Baltics apart from others, while also drawing on links and similarities with other countries. The story has three parts:

B. The Baltic Model

C. Baltic Links to the Nordics

10. These strong links are not just the result of proximity. While the financial sector links are obviously very strong, it could be argued that the investment and especially the trade links could be explained simply by proximity and the larger sizes of the Nordic economies. However, gravity model analysis that controls for the size of the partner country, the size of its economy, and geographic distance shows that the additional effect of being part of the Nordic-Baltic group is statistically significant for trade and inward FDI to the Baltics, and these results are robust over different time periods (Box 1).

We test the strength of regional integration in the Nordic Baltic region by estimating a standard gravity model. The standard gravity model relates cross border flows to population, economic size and geographical distance. In its basic form, the gravity model assumes that trade between two countries increases with their economic size and decreases with the distance between them. It is also common to add population as an additional variable related to market size. In addition, per capita income is often employed because it could reasonably proxy per capita expenditure and the propensity for imports (Paas and Tafenau, 2005).1 We expand this model to test whether relations are more intense within the Nordic-Baltic region, after controlling for the standard elements of a gravity equation. We do so by introducing a dummy that identifies the country pairs where both members are either a Nordic or Baltic economy. A significant coefficient on the dummy suggests that Nordic-Baltic regional links are stronger than can be explained by the standard gravity variables.

We estimate a gravity model for both bilateral trade flows as well as inward FDI positions. In particular, we follow (Paas and Tafenau, 2005) and test whether the dummy that takes the value 1 when the country pair belongs to the Nordic-Baltic group of countries is significant.2 For the trade regressions, we use bilateral real imports as their coverage is generally better than that of exports. For the FDI regressions, we use bilateral nominal stock exposures, controlling for the downward bias of the very small size of FDI from the Baltics into the Nordic economies. The model estimated is represented as follows:

where T denotes bilateral imports (or, alternatively, inward FDI positions), GDPpc real GDP per capita (or nominal GDP for the FDI regressions), POP populations, dist distance between capitals and I(NB) is the Nordic Baltic dummy. All variables are in log form. Because the distance between countries does not vary within the panel unit, we use the between estimator for our baseline model. However we also allow for country pair (random) effects in an alternative estimation.

Our analysis indicates that trade and FDI links within the Nordic-Baltic region go beyond those explained by standard gravity factors. In particular, econometric estimates do not reject the hypothesis that the particular strength of linkages between the Baltic and Nordic economies is an additional explanation for the size of regional cross border trade and investment flows. The Nordic Baltic dummy is significant and robust across specifications, in particular in the case of bilateral trade regressions.

11. Cluster analysis from the IMF’s Strategy and Policy Review Department visually summarizes trade, FDI, portfolio investment, and banking links.5 This analysis shows that the Baltic countries form a cluster with each other, Sweden, and Finland. Denmark and Norway are also closely tied to the Baltics through their common Nordic links.

12. The Baltic countries have made a strong start on convergence in income toward the higher-income, more market-oriented economies. Whether because of the Baltic Model, the links to the Nordics, membership in the EU, or other factors, they have made substantial progress in reducing the gap over the last two decades. In this, they are a counter-example to the “stuck in transition” phenomenon explored in the recent European Bank for Reconstruction and Development (EBRD) Transition Report.6 Starting from income levels around ten percent of the Nordic or Anglo-Saxon countries in 1995, and about half those of the CE4 and the emerging OECD economies, they have tripled their income levels as a share of Nordic and Anglo-Saxon per capita GDP. Moreover, they have closed the gap and even surpassed the income levels of the CE4 and emerging OECD economies; notwithstanding the generally good performance of these peer groups.

13. Korea provides a more attainable reference point for Baltic income growth. The Baltic countries are still well below the Nordic or Anglo-Saxon countries in per capita GDP, but much closer to Korea (Figure 4). Their growth path over the last decade or so is quite similar to that of Korea roughly a decade earlier.

14. Notwithstanding their success thus far, the Baltics face some common challenges.

These are explored in detail in the subsequent chapters of this paper.

15. The financial systems are stable and well-capitalized, but they aren’t yet providing credit to support the ongoing recovery. Credit is still declining on average in spite of the recovery, except in Estonia. Reviving credit will be necessary to sustain growth and in the longer term, convergence. The relative importance of demand and supply factors in these creditless recoveries, policy responses, and the possible role of non-bank financing are considered in Chapter II of this Selected Issues Paper.

16. Export growth may be difficult to maintain. Export-to-GDP ratios have grown rapidly in Latvia and Lithuania and have remained very high in Estonia. However, the structure of exports is not well-oriented toward fast growing countries or products. This calls into question whether they are well positioned to continue their good export performance. This will be explored in greater detail in Chapter III.

17. Unemployment has remained high even though the labor force has been declining (Figure 5). Population fell on average by over 10 percent in the Baltics in the last decade and by close to 14 percent in Lithuania and Latvia. Both low fertility rates, relatively low life expectancy (especially for males) and high rates of net emigration are contributing to this, and old age dependency ratios are high and rising. In spite of this, estimated structural unemployment remains high. The explanations for the apparently high rates of structural unemployment do not seem to be legal or contractual impediments to labor market flexibility. Instead, they may be partly the result of high taxation of labor income and skills and education mismatches. These issues are considered in Chapter IV.

18. There is a “Baltic Model” and it has worked so far. The Baltics are charting a course of economic convergence with higher-income advanced economies—with clear commonalities among the three countries and differences from their transition and non-transition peer countries. While they are more closely linked to the Nordics, their policies are more laissez-faire and resemble those of the Anglo-Saxons in some ways. Their particular policy mix has been successful thus far with impressive income growth.

19. The revealed preferences of the Baltics resemble a mix of Nordic and Anglo-Saxon policies.

20. The Baltics are closely linked to the Nordics in many ways. Trade, investment, and financial links among the Nordic and Baltic countries are close, particularly for banking and particularly for Estonia across the range of economic links. The Nordic and Baltic countries are tending toward increasingly close linkages, particularly in banking. These linkages reinforce the need for policy coordination and collaboration that is already a feature of Nordic-Baltic cooperation.

21. The Baltics are converging rapidly toward their higher-income comparators. The

Baltic Model has produced high growth even compared to their very successful transition and non-transition economic peers. However, new challenges in increasing exports, providing adequate finance for economic growth, and reducing unemployment need to be addressed to sustain growth and convergence going forward.

The Nordics comprise Denmark, Finland, Iceland, Norway, and Sweden. The “Anglo-Saxons” are the majority-Anglophone OECD economies: Australia, Canada, Ireland, New Zealand, the United Kingdom, and the United States. The CE4 are the Czech Republic, Hungary, Poland, and the Slovak Republic. These and other comparator groups used in this paper are set out in Annex I.

The cluster analysis is described in IMF, 2012, “Enhancing Surveillance—Interconnectedness and Clusters” http://www.imf.org/external/pp/longres.aspx?id=4719. The analysis of cluster linkages for the Baltics was provided by Sophia Zhang and Franziska Ohnsorge.

Economic Ties of the Baltics

Convergence of the Baltics

Social Indicators in the Baltics 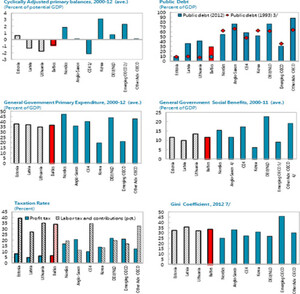 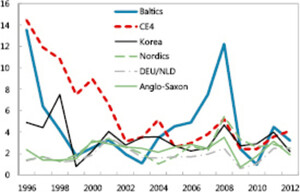 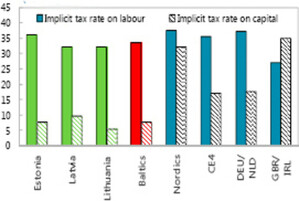 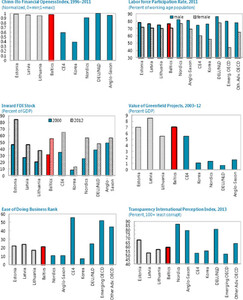 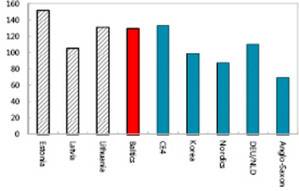 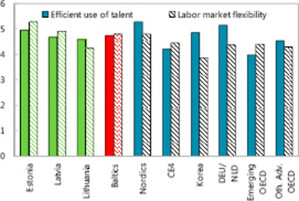 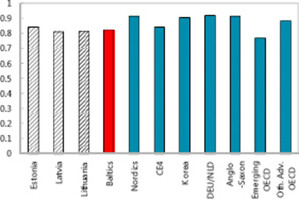 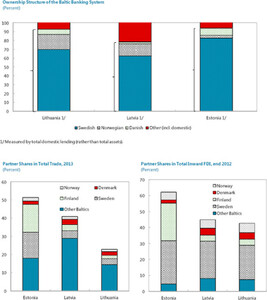 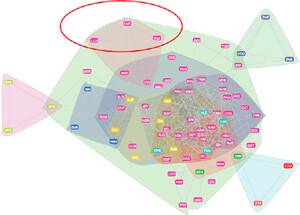 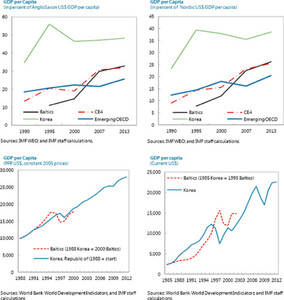 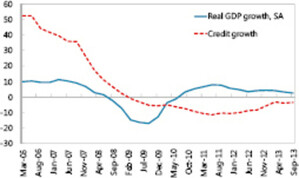 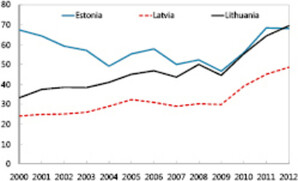 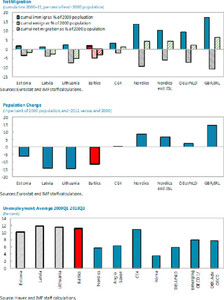