This paper discusses key findings of the Report on the Observance of Standards and Codes—Data Module for Uruguay. Uruguay exceeds the Special Data Dissemination Standard (SDDS) timeliness requirements for labor market (employment, unemployment, and wages/earnings), price (consumer prices and producer prices), and international investment position data. The legal and institutional basis for Uruguayan statistics is sound and follows international good practice. Under institutional integrity, based on the mission’s meetings with data users, the Central Bank of Uruguay and National Institute of Statistics possess a high level of “trust capital” to deliver impartially compiled and technically sound statistics within their resource envelopes.

This paper discusses key findings of the Report on the Observance of Standards and Codes—Data Module for Uruguay. Uruguay exceeds the Special Data Dissemination Standard (SDDS) timeliness requirements for labor market (employment, unemployment, and wages/earnings), price (consumer prices and producer prices), and international investment position data. The legal and institutional basis for Uruguayan statistics is sound and follows international good practice. Under institutional integrity, based on the mission’s meetings with data users, the Central Bank of Uruguay and National Institute of Statistics possess a high level of “trust capital” to deliver impartially compiled and technically sound statistics within their resource envelopes.

1. This Report on the Observance of Standards and Codes (ROSC)—Data Module is a reassessment of the exercise conducted in 1999–mid-2000, which was based on information collected during a November 1999 mission and used the dimensional structure of the first July 2000 draft version of IMF’s Data Quality Assessment Framework (DQAF). This reassessment covers national accounts, and consumer (CPI) and producer price indices (PPI). The Uruguayan agencies that compile and disseminate these datasets are: the Central Bank of Uruguay (CBU) for national accounts and the National Institute of Statistics (NIS) for the CPI and PPI. This Report is the first data ROSC based on the 2012 version of the DQAF, which assesses data quality against the relevant statistical standards current in 2012, including the System of National Accounts 2008 (2008 SNA), the Consumer Price Index Manual 2004 (CPI Manual), and the Producer Price Index Manual 2004 (PPI Manual).

2. The Report contains the following main observations. Following the 1999 data ROSC mission,1 Uruguay made significant improvements in statistical compilation and dissemination of the statistics covered by this ROSC—Data Module. The progress achieved allowed Uruguay to subscribe to the Special Data Dissemination Standard (SDDS) on February 12, 2004. Since its SDDS subscription, Uruguay has been in observance of the SDDS, meeting the specifications for coverage, periodicity, timeliness, and the dissemination of advance release calendars. In the last (2011) SDDS annual report on observance, Uruguay met the SDDS requirements for timeliness with episodic exceptions for some data categories. Uruguay exceeds the SDDS timeliness requirements for labor market (employment, unemployment, and wages/earnings), price (consumer prices and producer prices), and international investment position data. Currently, Uruguay is using two regular timeliness flexibility options for general government operations and central government operations; additionally, it is using an “as relevant” timeliness provision for analytical accounts of the banking sector for countries with extensive branch banking systems. No flexibility options are being used regarding real sector statistics. Appendix I provides an overview of Uruguay’s dissemination practices for real sector statistics compared to the SDDS.

3. In applying the DQAF, the remainder of this section presents the mission’s main conclusions. The presentation is done at the level of the DQAF’s quality dimensions, by agency for the first two dimensions and across datasets for the remaining four. Uruguay’s macroeconomic statistics are generally of good quality and adequately meet users’ needs. Since 1999, Uruguay has made tangible improvements on the methodological and dissemination aspects of data quality in national accounts and price statistics, as the coverage, weights, and base period of both macroeconomic statistics have been recently revised and updated. One important testament to the improvement of statistics is the subscription to the IMF’s SDDS after the 1999 ROSC mission.

4. The legal and institutional basis for Uruguayan statistics is sound and follows international good practice. The Central Bank of Uruguay (CBU) is a government agency endowed with technical, administrative, and financial autonomy. Quality awareness and quality management processes are included in the CBU’s 2010–2014 Strategic Plan and 2012 Strategic Initiatives. However, no explicit legal provision provides the responsibility to the CBU for compiling national accounts statistics. Staffing allocated to the Economic Statistics Area (ESA) is also limited. The National Institute of Statistics (NIS) is a public body responsible for the development, monitoring, and coordination of national statistics. Resources are very limited to perform its broad functions, although quality awareness is in place. The NIS in the process of implementing a quality management system. The process of recruiting economic statistics professionals into the Civil Service has slowed staffing at both the NIS and the CBU, and retention of qualified staff is a challenge for the NIS. A mechanism is not in place to collect feedback from data users. Under maintaining the relevance of statistics, both agencies could conduct more outreach to data users and give them more advance notice of pending methodological changes.

5. Under institutional integrity, based on the mission’s meetings with data users, the CBU and NIS possess a high level of “trust capital” to deliver impartially-compiled and technically-sound statistics within their resource envelopes. This said, staff training and support to staff for conducting research could be improved. Neither the CBU nor the NIS comment on erroneous interpretation and misuse of statistics. Both agencies follow sound practices to ensure the transparency of their methodologies as well as compilation and dissemination practices, the bedrock of statistical trust capital. However, both the CBU and NIS could give users more advance notice of changes in methodology. Ethical standards meet international norms and good international practice.

6. Under methodological soundness, the national accounts conform with the System of National Accounts 1993 (1993 SNA) and the CPI and PPI broadly conform with international methodological guidance from the Consumer Price Index Manual (2004), the Practical Guide to Producing Consumer Price Indices (2009), and the Producer Price Index Manual (2004). The principal exceptions are that the CPI does not cover either the implicit rent or the net acquisitions of owner-occupied dwellings, and the PPI does not cover services and exported output. The industrial activity classification is the International Standard Classification of All Industrial Activities, Revision 3 (ISIC, Rev. 3). The DQAF 2012 of this ROSC assesses Uruguay’s practices against the latest methodological standards; thus for the national accounts there is a need to plan adoption of the 2008 SNA and ISIC, Rev. 4. The product classification follows a national extension of the ISIC, Rev. 3 rather than the international standard Central Product Classification. The basis for recording follows the 1993 and 2008 SNA with the exception of components of government revenue and expenditure that are recorded on a cash and obligation basis, respectively, which deviate in degrees from the SNA accrual requirement.

7. Under accuracy and reliability, Uruguay’s national accounts are built on a good core system, but there are areas for improvement in source data. Business register maintenance could be better in identifying and deleting out of business units and reclassifying units changing principal industrial activity. Household expenditures are surveyed about once a decade. Coverage of the financial statements of financial corporations, public nonfinancial corporations, and public-private partnerships is robust, but not of private nonfinancial enterprises. About 60 percent of the GDP calculation is based on fixed input-output ratios from 1997. Household consumption is not independently derived and total changes in inventories and changes in inventories for most products are obtained as residuals. Uruguay disseminates annual but not quarterly GDP by the expenditure approach at current prices and does not compile annual integrated economic accounts by institutional sector, in particular, the generation of income account. For the CPI, reselection of the sample of detailed products has not been done for an extended period, and for both the CPI and PPI, statistical outputs/intermediate results are not validated with available information from alternative sources.

8. The CPI and PPI get good marks for source data on the basis of well designed surveys and advanced data capture technologies. The national accounts need improvement in the coverage and validation of source data. Both the CPI and PPI need to strengthen assessment and validation of intermediate data and statistical outputs. The staffing issues noted under prerequisites for quality have had their impact on the ability of the NIS, the principal supplier of source data, to maintain good data validation practices for secondary source data used in the PPI. Major revision studies are made for the national accounts when changing the base year, but regular revisions are not analyzed to detect bias in the series. The impacts of weight updates for the CPI and PPI are not analyzed.

9. Under serviceability, periodicity, and timeliness meet SDDS standards and the national accounts and price statistics get good marks for consistency with one another, the exception being that coverage of the CPI shelter component should cover not only renters, but also owner occupants. Detailed national accounts data are only available up to 2008. Long-time series are not available on the CBU website. There is no regular schedule for updating the base year of the national accounts. The quarterly national accounts get good scores on the elements of revision policy and practice, but the causes of current revisions are not explained to users. A monthly index of economic activity is not disseminated. The CPI and PPI would benefit from a more regular and frequent schedule of weight updates.

10. Both the CBU and the NIS get good scores on user accessibility of data and descriptive information (metadata) on the sources and methods through which real sector statistics are compiled, and both do well in providing assistance to users. The CBU and NIS could also undertake more regular revision studies and both could engage users more fully to improve statistical products and services.

11. Section II provides a summary assessment by agency and dataset based on a four-part scale. This is followed by staff recommendations in Section III. Practices compared to the SDDS are summarized in Appendix I. The authorities’ response to this report and a volume of detailed assessments are presented in separate documents.

Assessment by Agency and Dataset

12. Assessment of the quality of three macroeconomic datasets—national accounts, consumer price index, and producer price index—were conducted using the DQAF 2012. In this section, the results are presented at the level of the DQAF elements and using a four-level rating scale (Table 1). Assessments of the prerequisites of data quality and the assurances of integrity (Dimensions “0” and “1” of the DQAF) are presented in Tables 2a–b. For each dataset, the assessment of methodological soundness, accuracy and reliability, serviceability, and accessibility (Dimensions “2” to “5” of the DQAF) are shown in Tables 3a–c.

13. Based on the review of Uruguay’s statistical practices, discussions with the data producing agencies, and responses from data users, the mission has developed a set of recommendations. They are designed to increase further Uruguay’s adherence to internationally accepted statistical practices and would, in the mission’s view, enhance the analytical usefulness of Uruguay’s statistics. Some additional technical suggestions are included in the Detailed Assessments volume.

The 1999 assessment was based on a preliminary version of the DQAF, which was updated in 2001, 2003, and most recently 2012, as international standards have evolved. As noted below, the current assessment thus is based on broadly higher accomplishment thresholds than the 1999 ROSC. 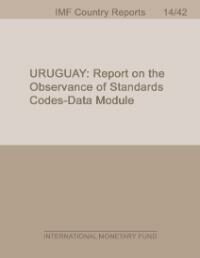