This 2013 Article IV Consultation highlights that the Canadian economy strengthened in 2013 after a subdued performance in 2012, but the underlying growth has remained modest. Despite the depreciating exchange rate, non-energy exports remained well below the levels reached after earlier recessions. The housing market has cooled, owing in part to macro-prudential measures adopted in the past. Economic growth is expected to accelerate to 2¼ percent in 2014, up from an estimated 1¾ percent in 2013. Canada’s export growth should benefit from the projected pick-up in U.S. growth in 2014, boosting business investment.

This 2013 Article IV Consultation highlights that the Canadian economy strengthened in 2013 after a subdued performance in 2012, but the underlying growth has remained modest. Despite the depreciating exchange rate, non-energy exports remained well below the levels reached after earlier recessions. The housing market has cooled, owing in part to macro-prudential measures adopted in the past. Economic growth is expected to accelerate to 2¼ percent in 2014, up from an estimated 1¾ percent in 2013. Canada’s export growth should benefit from the projected pick-up in U.S. growth in 2014, boosting business investment.

On January 29, 2014, the Executive Board of the International Monetary Fund (IMF) concluded the Article IV consultation with Canada.1

The Canadian economy strengthened in 2013 after a subdued performance in 2012, but the underlying growth has remained modest. The composition of growth does not yet point to the much needed rebalancing from household consumption and residential construction towards exports and business investment. In particular, despite the depreciating exchange rate, non-energy exports remained well below the levels reached after earlier recessions. These low export levels reflect not only the slower recovery in external demand but also increased challenges to competitiveness. Thanks to rising household wealth and still easy financial conditions, private consumption growth remained robust, but the household debt-to-income ratio reached a new historical high in the second half of 2013. The housing market has cooled, owing in part to macro-prudential measures adopted in the past, but house prices remain overvalued, although with important regional differences.

Economic growth is expected to accelerate to 2¼ percent in 2014, up from an estimated 1¾ percent in 2013. Canada’s export growth should benefit from the projected pick-up in U.S. growth in 2014, boosting business investment. Over time, a higher contribution to growth from net exports and business investment is expected to more than offset the slowdown in private consumption and residential investment. There are, however, still significant downside risks to the outlook, from an overshooting of long-term interest rates following the Fed’s exit from quantitative easing that would hinder the pick-up in economic activity in the United States, protracted weakness in the euro area growth, and lower-than-expected growth in emerging markets which could also lower commodity prices. Elevated household leverage and house prices, while a risk per se, could amplify the growth impact of adverse external shocks. The energy sector could be a source of both downside and upside risks, largely depending on progress in addressing infrastructure bottlenecks. A faster acceleration of the U.S. economy and further strength in Canada’s housing market pose upside risks to our forecast, although the latter would imply more risks down the road.

Fiscal consolidation continued, with the general government overall deficit expected to improve by about ¼ percentage points of GDP in 2013 to 3.1 percent of GDP. The federal government fiscal deficit declined at a faster-than-expected pace on the back of stronger spending restraint, and is expected to reach its balanced budget target in 2015. In contrast, a number of provinces delayed the return to a balanced budget, and the aggregate fiscal stance at the provincial level remained broadly unchanged in 2013.

As the output gap widened and inflation remained subdued, the Bank of Canada kept its policy rate at 1 percent, the same level since September 2010, and gave more emphasis to the risks associated with low inflation. Reacting to the perceived shift in Bank of Canada’s policy stance, markets postponed the expected timing of the first increase in the policy rate.

Canada’s banking sector remains well capitalized and has low levels of nonperforming loans. Stress tests suggest that major financial institutions (banks and insurance companies) would continue to be resilient to a severe stress scenario, although risks remain from the continuation of a low interest rate environment. The regulatory and supervisory framework is strong, and is complemented by a credible federal system of safety nets, although there is no single body with an explicit mandate to take a comprehensive view of systemic risks or to undertake crisis preparedness. Improving cooperation between federal and provincial authorities would further reinforce system wide oversight arrangements. Steps have been taken towards a more coordinated regulation of securities markets, and the progress on the international financial reform agenda continued.

Executive Directors commended the authorities for their continued sound macroeconomic and financial sector management. Directors noted that, after a subdued performance in 2012, the Canadian economy strengthened in 2013, but the expected rebalancing from household consumption and residential construction towards exports and business investment has not materialized.

Directors welcomed the improved short-term growth outlook, but noted that the balance of risks remains tilted to the downside and important vulnerabilities, including elevated household leverage, remain. Directors agreed that policies should continue to sustain economic activity until the transition to more balanced growth gains firmer momentum, while assuring the continued gradual unwinding of domestic imbalances. Directors considered that raising productivity growth and broadening market access to Canada’s energy resources are key to boost growth potential.

Directors viewed the current accommodative monetary policy stance as appropriate in light of low inflation, well-anchored inflation expectations, the negative output gap, and looming downside risks. The existence of domestic imbalances, however, reduces the room for lowering the policy rate despite the recent moderation in the housing sector and household borrowing. In case of a renewed acceleration in housing imbalances, Directors saw additional macro-prudential measures as the first line of defense.

Directors stressed that fiscal policy should strike the right balance between supporting growth and rebuilding fiscal buffers. If significant downside risks to growth materialize, the federal government has room to slow its planned return to a balanced budget. Provinces with a weak fiscal position might need to consider additional measures to ensure their deficit reduction timetable is met.

Directors underscored the importance of addressing long-term fiscal sustainability challenges at the general government level. They welcomed recent steps taken at the provincial level to limit health care spending growth and stressed the need to maintain those savings into the future, including through efficiency gains. Directors agreed that publishing long-term fiscal sustainability analysis at both provincial and general government levels would help raise the public awareness of the challenges ahead and build consensus around the needed policies.

Directors concurred that there is scope for re-examining the role of government-backed mortgage insurance over the long term. While acknowledging the advantages of the current system, Directors welcomed the authorities’ recent initiatives to impose limits on government-backed mortgage insurance and noted that further measures should be considered to encourage appropriate risk retention by the private sector and a more efficient allocation of resources.

Under Article IV of the IMF’s Articles of Agreement, the IMF holds bilateral discussions with members, usually every year. A staff team visits the country, collects economic and financial information, and discusses with officials the country’s economic developments and policies. On return to headquarters, the staff prepares a report, which forms the basis for discussion by the Executive Board. At the conclusion of the discussion, the Managing Director, as Chairman of the Board, summarizes the views of Executive Directors, and this summary is transmitted to the country’s authorities. An explanation of any qualifiers used in the summing up can be found here: http://www.imf.org/external/np/sec/misc/qualifiers.htm. 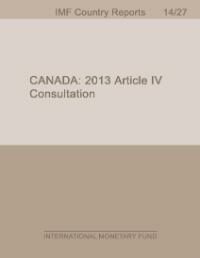