This Selected Issues paper examines the drivers and implications of the agricultural land price boom in Uruguay. It finds that almost half of the increase in agricultural land prices between 2000 and 2010 can be explained by commodity price dynamics. At the same time, farmland prices are estimated to have played an important role in the transmission of commodity price shocks to economic activity, accounting for about 30 percent of the effect of commodity price shocks on GDP growth in the region. The paper also examines the performance of Uruguay’s exports and external balances over the past decade.

This Selected Issues paper examines the drivers and implications of the agricultural land price boom in Uruguay. It finds that almost half of the increase in agricultural land prices between 2000 and 2010 can be explained by commodity price dynamics. At the same time, farmland prices are estimated to have played an important role in the transmission of commodity price shocks to economic activity, accounting for about 30 percent of the effect of commodity price shocks on GDP growth in the region. The paper also examines the performance of Uruguay’s exports and external balances over the past decade.

1. Exporters of food commodities in the Latin America region, including Uruguay, have experienced strong growth in agricultural land prices in recent years. Against the backdrop of a super cycle in commodity prices, the agribusiness sector has been an important driver of the vigorous growth observed in some Latin American countries. The strong demand for agricultural land has pushed land prices to record levels, with prices per hectare increasing fourfold on average for the region during the last decade. Among the countries in the region where data is available, Uruguay is where farmland prices have increased the most. Therefore, a better understanding of the underlying factors behind land price dynamics and the impact of land prices on the broader economy is useful for Uruguay.

2. The paper is organized as follows. Section B describes some stylized facts on commodity and farmland prices, and production. Section C describes the data and the econometric methodology. Section D presents the results, and Section E concludes.

B. Some Stylized Facts

3. Land prices increased almost fourfold on average for the region between 2000 and 2010 (Figure 1). The observed increase in land prices during the last decade has been stronger than any ten year period in the last 30 years; it has also been stronger than in other comparators, e.g. in the United States, where farm land prices roughly doubled over the same period. The boom in land prices materialized against a backdrop of a strong rise in global food prices, including for soybeans—an increasingly important export commodity for Uruguay and the region—and an increase in the share of the agricultural land used for soybean production.2

4. Agriculture-related FDI is likely to have played an important role in explaining the observed land price dynamics. In the case of Uruguay, expectations of high investment returns due to rising agricultural commodity prices, accompanied by a stable macroeconomic environment and a favorable investment climate, have supported a substantial inflow of FDI. The agricultural sector was one of the main recipients of FDI during the last decade. Land has been a primary destination of FDI into the agricultural sector, accounting on average for almost sixty percent of agriculture-related FDI.

6. The estimated wealth of Uruguayan farms has risen dramatically as a result of soaring agricultural prices. In 2000, total farmland surface was 16.3 million hectares. Assuming a price per hectare of around US$531 (based on MGAP’s agricultural statistics), total farmland value in 2000 amounted to about US$8.7 billion. In 2011, the value of farmland value reached US$52 billion (16.2 million hectares with price per hectare of around US$3,196), representing an eightfold increase in estimated wealth (from 28 percent of GDP in 2000 to 112 percent of GDP in 2011).

C. Food Prices as a Driver of Agricultural Land Prices

7. The drivers of land price dynamics are identified using a structural VAR (SVAR) model. This method allows obtaining dynamic responses of farmland prices to commodity prices shocks as well as quantifying the relative importance land prices as a propagation mechanism and amplifier of macroeconomic fluctuations. The relationship between the variables in this model is assumed to be governed by a system of “structural” equations. Ignoring the constant term, the system can be written as:

The model can be estimated by ordinary least squares, imposing restrictions on A0 to identify the coefficients in the structural form. Identification is achieved through a Choleski decomposition of the variance-covariance matrix Σe of reduced-form errors, given by et.

8. The VAR includes a global index of non-fuel commodity prices, agricultural land prices (in dollars per hectare), lending rates, and real GDP. The VAR is estimated in log-fist-differences with the exception of lending rates, which are estimated in levels. The VAR is first estimated in panel format for Argentina, Brazil, and Uruguay through 1995–2011. Results from country specific VAR estimations are also reported.

9. The recursive nature of the empirical model makes the results sensitive to the ordering of the variables in the system. The selected Choleski ordering is characterized by the idea that the more exogenous variables of the model precede the endogenous ones. Hence, global variables (commodity prices) are included first and domestic variables (land prices, lending rates, and real GDP) are last. This implies that land prices do not respond instantly to changes in lending rates or economic activity, but the latter may be affected by contemporaneous changes in commodity prices.4

11. Our findings suggest that commodity prices had an important effect on agricultural land prices. In a panel consisting of Argentina, Brazil, and Uruguay (Figure 2), a positive one and a half standard deviation shock to the growth rate of commodity prices (equivalent to a 6 percent q/q increase on impact) increases the growth rate of land prices by almost 7 percentage points eight quarters after the impact (cumulative). Furthermore, the shock to commodity prices eases credit conditions by reducing lending rates, although not significantly. Output responds significantly one quarter after the shock, and has a cumulative growth rate of around 2 percent eight quarters after impact.

12. In Uruguay, a positive one-and-a-half standard deviation shock to the growth rate of commodity prices increases the growth rate of land prices by almost 6 percentage points eight quarters after impact (Figure 3). In contrast to the panel results, the response of lending rates (credit conditions) to the shock to commodity prices is statistically significant. The response of output is slightly smaller than the panel estimation, but it remains economically and statistically significant.

14. Were land prices an important channel through which food commodity prices influenced the aggregate economy? To quantify the impact of land prices on the economy as a whole and to test whether they act as amplifiers of global commodity price shocks, counterfactual scenarios are constructed (Figure 4). By comparing the impulse responses with and without land prices, we observe that land prices do in fact amplify shocks to commodity prices and contribute to a further loosening in lending rates. In the case of Uruguay, land prices account around 30 percent of the increase in the growth rate of GDP eight quarters after impact (compared with 40 percent in the panel estimation).

15. The marked increase in farmland prices in the past decade could be explained to an important extent by commodity price dynamics, and land prices, in turn, have played a key role in propagating the commodity price shocks on output. Higher overall productivity in the agriculture sector, supported by strong FDI inflows, is also likely to have been a key driver of the rise in agricultural land prices.

In Uruguay, pulp has also become an important agricultural staple. Paper production has increased eightfold in the last 8 years, and the sector will expand even further when the Montes del Plata pulp mill becomes operational in 2014.

Partial productivity of main staples (i.e. soybeans, barley, and maze) has not shown the same increasing trend. This is partly reflected by the brisk expansion of land used for crop production to land previously used for livestock production, which is of lower nutrient quality (therefore less productive). This reallocation brings down average productivity for crops, as measured by their yield (kilograms per hectare).

The results are qualitatively robust to different orderings.

The counterfactual scenarios are equivalent to estimate the full SVAR dynamics, but with the coefficient corresponding to land prices in the GDP equation set to zero.

Decomposition of Response to Commodity-Price Shock 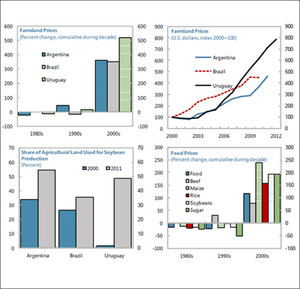 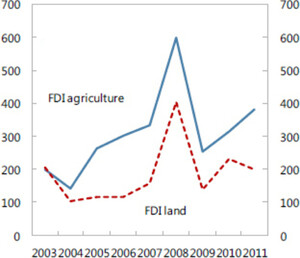 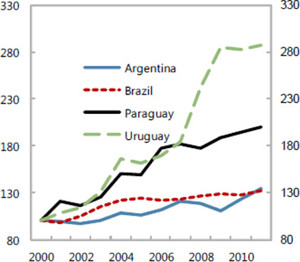 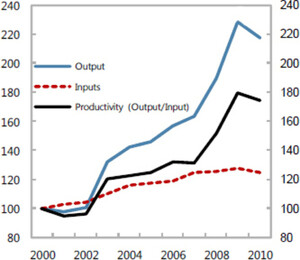 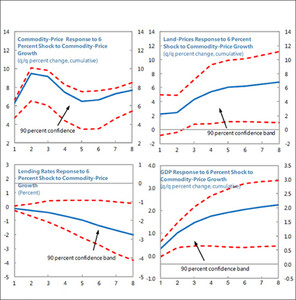 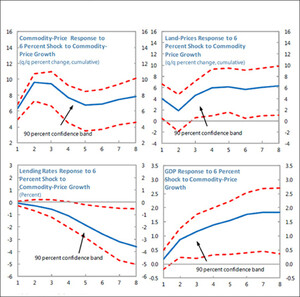 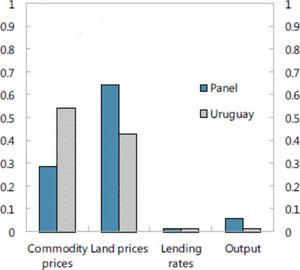 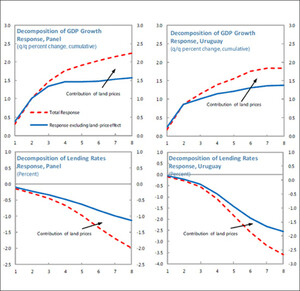