This Selected Issues paper examines implications for long-term bond yields in case of Japan. The analysis finds that so far, upward pressure on interest rates from high public debt has been offset by domestic factors, including a stable investor base with a preference for safe assets. As these effects could decline with population aging, yields could rise unless reforms are implemented to stimulate growth and reduce the public debt-to-GDP ratio. In such a scenario, long-term Japanese government bond rates would remain relatively low and stable. The paper also analyzes to what extent rising health care spending poses a fiscal risk to Japan’s economy.

This Selected Issues paper examines implications for long-term bond yields in case of Japan. The analysis finds that so far, upward pressure on interest rates from high public debt has been offset by domestic factors, including a stable investor base with a preference for safe assets. As these effects could decline with population aging, yields could rise unless reforms are implemented to stimulate growth and reduce the public debt-to-GDP ratio. In such a scenario, long-term Japanese government bond rates would remain relatively low and stable. The paper also analyzes to what extent rising health care spending poses a fiscal risk to Japan’s economy.

This note examines the key determinants of long-term sovereign yields using a panel of the main advanced economies. Empirical results suggest that Japan’s forward rates are determined by fiscal conditions, demography, growth and the inflation outlook, and the investor base of government securities. Deteriorating fiscal conditions would push up long-term rates by about 2 percentage points over the medium term, but the effect is partly offset by higher demand for safe assets amid population aging and increased purchases by the Bank of Japan (BoJ). A widening trade deficit, surprisingly, only contributes modestly to long-term yields, in part because of Japan’s sizeable net foreign assets holdings.

1. In April 2013, the BoJ has introduced a new quantitative and qualitative monetary easing (QQME) framework by doubling the purchase size of Japanese government bond (JGB) and extending the average maturity of JGB holdings in an effort to meet the 2 percent inflation target and lift growth (text chart). The QQME is part of the government’s three-pronged approach to revitalize Japan—also known as Abenomics—that includes flexible fiscal policy, aggressive monetary easing, and structural reforms.

2. The impact of the new policies on the level and volatility of long-term JGB rates is mixed (Figure 1). The JGB market exhibited unusual volatility in the immediate aftermath of the QQME announcement, about four times the average volatility and the highest since the last spike in 2003. This volatility likely reflects two opposing forces on long-term interest rates: on the one hand, through sizeable purchases under QQME (around 20 percent of GDP for next two years), the BoJ intends to lower long-term interest rates further; but on the other hand, if the BoJ succeeds in achieving the 2 percent inflation target over the medium term, nominal long-term rates are likely to rise from current levels, thereby posing losses to financial institutions holding or buying more long-term JGBs. The uncertainty on the level of future JGB yields matters particularly for institutional investors including domestic banks, insurance companies, and pension funds, which hold nearly three-quarters of outstanding JGBs. As a result, a reassessment of portfolio compositions likely contributes to changes in long-term interest rates, which have risen by 20–40 basis points during April to June. Nonetheless, yields remain low at about 90 and 180 basis points for 10-year and 30-year JGBs, respectively.

3. Several factors are often cited as contributing to low and stable JGB yields, but their quantitative impact is less known. Hoshi and Ito (2012) pointed out that Japan has been able to “defy gravity”—low and stable yields despite a soaring public debt-to-GDP ratio—over the past two decades. In addition to low growth and lingering deflation, the low and stable sovereign yields could be attributable to several factors (Figure 2):

B. A Panel Analysis on the Determinants of Long-Term Interest Rates

4. This section builds on previous analyses on the determinants of long-term yields across advanced countries. Specifically, Ichiue and Shimizu (2012) provides quantitative estimates of factors that determine long-term interest rates, but do not incorporate the recent policy changes nor assess how these factors may evolve over the long term. The current econometric framework also extends on the estimation approach by analyzing the role of the investor base in affecting long-term sovereign yields.

5. The estimates allow us to quantitatively assess to what extent each factor drives long-term rates over time (Figure 3). As we are primarily interested in the determinants of long-term rates under the QQME and rising public debts, we use estimates from specification (1) to obtain the contributions of each factor.

6. Under an upside scenario with a full policy package, the long-term interest rates are likely to remain stable in the long run (Figure 3). In line with the model analysis in the staff report, the full policy package assumes credible fiscal policy adjustments and structural reforms that will achieve a declining public debt trajectory and higher potential growth. In addition, this analysis further assumes a gradual exit of the unconventional monetary easing by the BoJ after achieving the inflation target. In this regard, higher growth and lower holdings by the BoJ would push up slightly interest rates over the medium term, relative to the baseline, while the near-term interest rates remain low and stable. Notably, lower public debt ratios, together with a long-term primary surplus, would keep long-term nominal interest rates at stable levels at about 4 percent over the long term.7 This implies that real interest rates would be at a range of 1.2–1.9 percent over the medium term.

Caveats of the estimation and projection

7. Steady long-term interest rates are critical for fiscal debt dynamics and financial stability. A rise of long-term rates, if not accompanied by robust growth and inflation, is likely to pose an additional burden on fiscal conditions and financial stability given the high debt level and substantial holdings of JGBs in the financial system. A 100-basis-point rise in interest rates would boost the budget deficit by about ½ percent of GDP over five years according to Cabinet Office estimates (2010). Regional banks that hold a large portion of long-term JGBs may be subject to higher interest rate risks if yields spike. A 100-basis-point rise in the yield curve would pose interest rate risks equivalent to about 20 percent of the Tier 1 capital in regional banks.8

8. More ambitious fiscal adjustment is necessary over the medium term to contain the risk of a surge in long-term rates. Since 2007, the worsening of fiscal conditions has contributed to an increase of interest rate by more than 1 percentage point. Based on the estimates, credible fiscal adjustments that lower medium-term projections of public debts and deficits can have an impact on the current level of long-term rates through a change of expectation. A successful implementation of Abenomics—that includes ambitious medium-term fiscal consolidation and growth reforms in addition to aggressive monetary easing—will be essential to keep long-term interest rates low and stable at levels broadly similar to nominal GDP growth rates.

9. Monetary policy alone cannot counter a potentially rising fiscal risk premium under current policies. Even if the BoJ expands its balance sheet to near 60 percent of GDP by 2014 under the QQME, the estimates indicate that long-term rates in Japan going forward are likely dominated by the deteriorating fiscal conditions.

10. In that regard, ambitious growth and fiscal reforms are necessary to contain fiscal risks. Without ambitious growth and fiscal reforms in train, the BoJ could face difficulties in maintaining stable long-term rates. Accelerating the pace of reaching the 2 percent inflation target may contribute to reviving growth and contribute to a “normalization” of long-term rates. It is expected the sizeable purchases would keep the long-term rates low and stable, but risks of policy missteps are notable. The path to exit deflation and lift growth may be subject to substantial risks: for instance, inflation expectations may remain subdued or rise without corresponding improvements in wages and growth. Financial institutions may change their investment strategies from JGBs that pose risks to the interest rates.

11. Though there is scant evidence on the role of trade deficits on long-term interest rates, maintaining external stability remains important. Deteriorating external conditions in Japan would imply a heavier reliance of foreign investors in financing the public debt. This may increase the volatility of long-term interest rates even without significantly imposing a risk premium on long-term government bonds.

The total tax-to-GDP ratio for Japan is still low at around 30 percent (including payment into the social security system) and has room to increase to a level comparable to European countries to eliminate the financing gap.

In Japan, households hold more than half of financial assets in cash or deposits. Hashiwagi and Lam (2011) examines the saving behavior across age and cohort groups using household survey data and finds that over the medium term, the effect of risk aversion on asset allocation toward government securities among the elderly is likely to exceed the impact of a reduction of elderly saving rates.

These new issues were not covered in earlier studies written on long-term financing aspects of JGBs (Tokuoka, 2010; Lam and Tokuoka, 2011; Hoshi and Ito, 2012; Baba, 2012). Poghosyan (2012) looked into the determinants of short-term and long-term yields across advanced countries.

Regression estimates for two groups of countries are included. Group 1 includes all countries except France and Italy as they are in the euro area that is broadly represented by Germany, while Group 2 includes both France and Italy.

See the accompanying Staff Report for the Article IV consultation with Japan and 2013 Spillover Report.

Including loans, bonds and debt holdings would increase interest rate risks equivalent to about one-third of Tier 1 capital in the regional banks for a 100-basis-point value based on BoJ estimates (Financial System Report, April 2013).

JGB Market under Abenomics and QQME 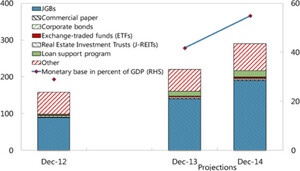 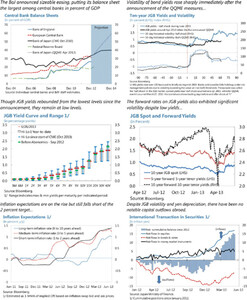 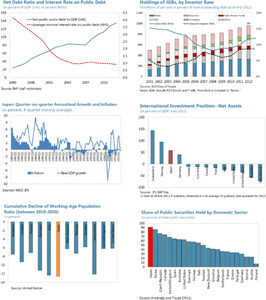 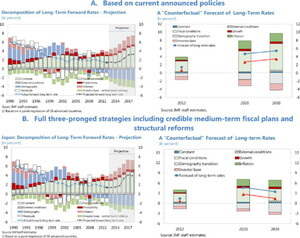