Technological advances have stimulated rapid growth in the domestic production of oil and gas. The energy boom is likely to continue going forward, but uncertainty about the possible outcomes is high. The positive GDP effects could be modest in the United States, not least due to the small share of mining and energy-intensive industries in the economy, although implications for the international energy markets could still be significant. The energy boom could put some appreciation pressure on the U.S. dollar. The energy trade balance should continue improving going forward, but the current account implications appear ambiguous.

1. The United States is currently experiencing rapid growth in oil and gas production. Technological advances (especially horizontal fracturing and drilling) have helped to unlock unconventional oil and gas from tight-rock formations including shale, reversing a long period of production declines (Box 1). Production of crude oil and other petroleum products has increased by 30 percent over the past 5 years, helping to halve the net imports of crude oil and related liquids. Natural gas output has been up by about 25 percent over the same period.

What are Shale Gas and Tight Oil?

Shale is a fine-grained sedimentary rock which can be rich in oil and natural gas. However, due to its low permeability, the oil and natural gas contained in these rocks will not easily flow to wells without assistance from advanced drilling techniques such as hydraulic fracturing and horizontal drilling. Hydraulic fracturing involves pressurized injection fluids commonly made up of water, sand and chemical fluids. This mix is injected under high pressure, down and across into horizontally drilled wells as far as 10,000 feet below the surface. The pressurized mixture causes the rock layer to crack. The fissures are held open by the sand particles so that “tight oil” or “shale gas” flow back to the well.

2. The energy boom has already had positive effects on the U.S. economy. Besides the direct benefits from higher oil and gas output, there has been a flurry of activity in the supporting industries (e.g., rigs, pipelines, services). However, reflecting the small share of oil- and gas-related sectors in the U.S. economy (around 1½ percent of GDP), all mining contributed only 0.1 percentage point to real GDP growth last year. Employment in the oil and gas sectors increased by around 50,000 employees in both 2011 and 2012—a small share of the net 2.2 million jobs created in the U.S. economy just last year. That said, technological constraints on gas exports have helped to push the domestic price of natural gas well below prices in other major markets, providing a competitive advantage to domestic industries and helping to support consumer demand through lower utility prices.

3. These positive supply developments have been accompanied by continued improvements in energy efficiency. Sustained high oil prices around $100 a barrel have stimulated lower use of oil in the transport sector—a development also supported by the introduction of more stringent corporate average fuel economy standards as well as demographic and economic changes. According to data by the U.S. Energy Information Agency (EIA), the energy intensity of GDP has fallen by about 15 percent over the past decade, and this pace is expected to pick up gradually to about 20 percent per decade.

4. The rapid growth in natural gas production and the segmented nature of the global gas market has unleashed a wave of rebalancing within the U.S. energy sector. Natural gas has been displacing coal in electricity generation—in turn, coal exports have increased substantially, especially to Europe. Meanwhile, low natural gas prices has incentivized producers to explore fields with a high content of crude oil or natural gas liquids, helping to further cut oil imports. The United States has traditionally been a net importer of natural gas, thus lacking liquefaction facilities for export. However, the administration has granted LNG export approvals to two companies this year and is expected to make decisions on additional export applications in the near future.

5. Most forecasters expect substantial increases in the unconventional production of oil and gas, although forecasts differ substantially (Figure 1). In the EIA’s central scenario, production of crude oil and natural gas could increase by some 15 percent over the next decade, but forecasts by some analysts are substantially more optimistic. The differences reflect a variety of uncertainties related to both technology and policy:2

B. Impact on the Energy Balance—Partial Equilibrium Analysis4

6. The combination of higher energy output and greater efficiency has led to a significant narrowing of the U.S. energy trade deficit. In nominal terms, the energy deficit (comprising of the oil, gas, and coal trade) shrank from 2.7 percent of GDP in 2008 to 1.9 percent of GDP in 2012. At the same time, the net volume of imported oil liquids has fallen from over 13 mbd in 2005 to 6–7 mbd at present, and the net volume of imported natural gas has halved as well.

7. This section assesses the likely path of future energy balances under alternative assumptions about production, consumption, and prices. The calculations are prepared in a “partial equilibrium” framework, i.e., without taking into account the second-round effects of higher energy output on the economy such as exchange rate appreciation and higher consumer demand. The analysis rests on the production and consumption forecasts prepared by the U.S. Energy Information Administration (EIA, 2013a) supplemented by price assumptions from the EIA, IMF’s World Economic Outlook, and the International Energy Agency (IEA, 2012). The specifications of baseline and alternative scenarios are as follows:

8. In all scenarios, the U.S. energy balance is projected to continue improving as a share of GDP thanks to higher domestic production and expected efficiency gains.

9. This section attempts to tackle the difficult question of broader macroeconomic implications of the unconventional energy boom. In addition to the direct effects of higher energy-related production on output and trade balance, the U.S. economy could be affected through a number of other indirect channels:

10. Analysis in this section rests on the IMF’s Global Economy Model (GEM), a six-region general equilibrium model of the world economy. The model includes a simple energy sector which combines oil, gas, coal, and other energy sources. Energy is produced by combining labor and capital inputs with a fixed factor that proxies the discovery of unconventional energy and related extraction technologies. For simplicity, each country’s household sector is represented by a representative agent. As a result, countries are neither net creditors nor net debtors in the long-run. Given the stylized nature of the model, simulation results should be considered only as illustrative.

11. Model simulations are calibrated using a simplified baseline scenario from the previous section. Specifically, higher energy production and efficiency improvements are assumed to reduce the net energy trade deficit before any second-round effects by 0.9 percentage points of GDP during 2012–2025. It is also assumed that this improvement in the energy balance is attained linearly over the next 12 years, and is evenly split between the contributions of higher production and efficiency (each factor, therefore, contributes 0.45 percentage points of GDP).

12. Several modeling scenarios are considered to highlight the range of possible macroeconomic outcomes from the energy boom and efficiency gains. The key modeling assumptions are related to:

13. The simulation results suggest that the macroeconomic benefits for the United States are positive, but may be modest. In a scenario with only production gains (and no efficiency improvements), the U.S. real GDP level gradually increases by about 0.3 percent over the next 10 years. In a scenario with both production increases and efficiency gains, the GDP level increases by ½–1 percent during the next decade. In the short run, the impact on GDP is largest when the boom in energy production and efficiency are fully anticipated and the economy exhibits economic slack (and thus monetary policy does not need to lean against the resulting increase in aggregate demand). The real exchange rate tends to appreciate and energy prices fall in all scenarios, helping to boost private consumption and investment. In the medium run, the U.S. current account balance as a share of GDP deteriorates slightly, but the adjustment path is highly sensitive to assumptions about expectations and private saving behavior—the current account can either improve or deteriorate. Specifically:

14. This chapter explored potential implications of the U.S. unconventional energy boom. Most analysts agree that U.S. energy output will continue rising going forward, although there is a wide range of views about the possible outcomes. For plausible parameter values, model simulations suggest that the macroeconomic effects will be positive for the United States but may be modest. Under the baseline, the increase in real GDP level attributable to higher domestic energy production could be less than 1 percent after 10 years, although energy production growth has tended to surprise on the upside, and the official production forecasts could prove too pessimistic. The energy boom could put some appreciation pressure on the U.S. dollar, while the current account implications appear ambiguous. Although the U.S. macroeconomic effects appear modest due to the small share of mining and energy-intensive industries in the economy, the energy boom could yet have important implications for the rest of the world, including the major energy exporters especially if accompanied by a more aggressive pursuit of unconventional energy sources in other economies.

This chapter was prepared by Ben Hunt, Martin Sommer, Gabriel Di Bella, Madelyn Estrada, Akito Matsumoto, and Dirk Muir. The authors have benefited from useful discussions with Samya Beidas-Strom, Gian Maria Milesi-Ferretti, Shane Streifel, and several staff members from the Congressional Budget Office, the Federal Reserve, and the Treasury. The opinions expressed in the chapter are those of the authors, and should not be associated with any of the institutions above.

Refined products such as gasoline can be exported. The United States has become a net exporter of refined petroleum products in recent years. Due to this integration with the world market, the U.S. and global gasoline prices have co-moved, despite the large wedge between the U.S. (WTI) and global crude oil benchmarks (Brent).

Calculations in this section were prepared by Gabriel Di Bella.

Simulations in this section were prepared by Dirk Muir.

However, the savings from lower energy costs would be tangible only in a handful of industries, which make up a small fraction of U.S. GDP. For example, the four non-transport industries with the energy cost share greater than 5 percent of output account for just 1¼ of GDP. The entire durable manufacturing sector (including low energy-intensity industries) accounts for 6½ percent of GDP. Certain industries also use natural gas as feedstock and could in principle benefit from low U.S. natural gas prices to a greater degree than suggested by the data on energy shares—however, sufficiently detailed input-output tables are not readily available.

In a representative agent model, the steady states for the current account and net foreign asset position are indeterminate. A number of approaches have been applied to ensure that these types of models have a stable steady state. In GEM, a term is added to the exchange rate equity to force NFA and the current account to return to baseline in the long run in the absence of any change in any country or region’s ration of public debt to GDP.

For simplicity, the simulation assumes that the long-standing trend toward higher production efficiency is not yet reflect in the behavior of households and corporations—this assumption would tend to exaggerate the positive GDP effects in the scenario. 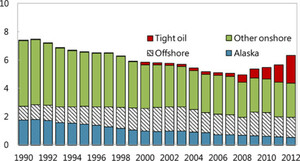 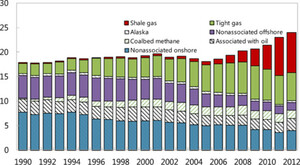 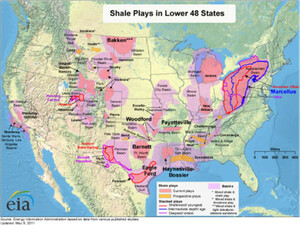 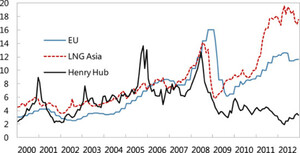 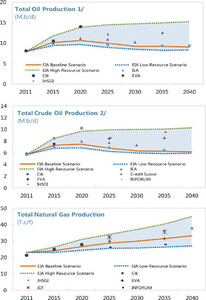 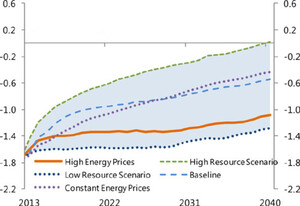 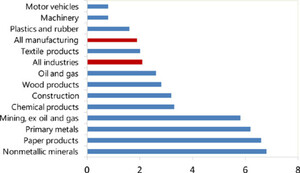 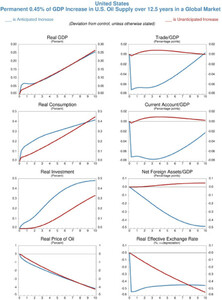 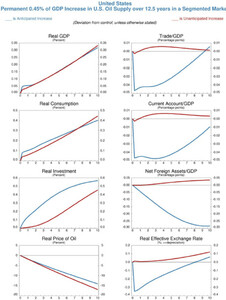 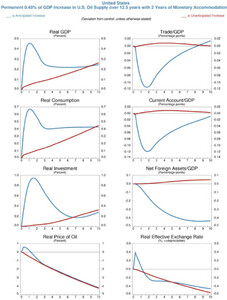 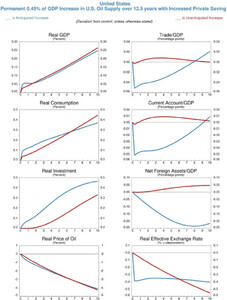 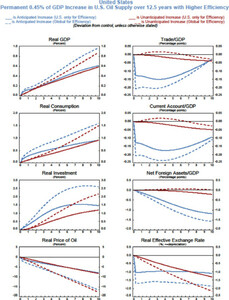 Change to Oil Trade Balance by 2040

A mechanical improvement in the energy balance-to-GDP ratio due to higher nominal GDP.