Over the last ten years, Saudi Arabia has significantly reduced its vulnerability to fiscal risks. Saudi Arabia has built up considerable fiscal buffers, by smoothing short-term fluctuations in oil prices following a prudent and conservative budget formulation strategy. This has led to the reduction of the large debt stock accumulated during the 1980s–1990s, and the buildup of large external reserves. This paper reviews fiscal vulnerabilities arising from changes in oil prices, assesses the current risk management strategy, and evaluates the extent of fiscal risks based upon a monitoring framework outlined in Baldacci et al (2011). For most risk indicators, Saudi fiscal variables are found to be comfortably below the risk thresholds in this framework. Nevertheless, this risk mitigation approach also carries potential costs, particularly in terms of the absence of a medium term budgetary framework and more generally ensuring expenditure efficiency.

A. Fiscal Risks from Oil Prices

1. For several decades, Saudi Arabia has faced unique challenges managing fiscal risks. This is due to the dominance of the oil sector in the overall economy and the fiscal accounts. As a proportion of both GDP and total revenues, the oil sector provides the bulk of fiscal resources. For example, in 2012, oil revenues accounted for 92 percent of Saudi total revenues (Figure 1). At the same time, oil revenues exhibit high volatility and uncertainty compared to other tax revenues, and are exhaustible, raising important intertemporal fiscal issues.

2. High oil prices and large fiscal surpluses in recent years have placed limitations on the extent of non-oil revenue diversification. The non-oil tax regime is comparatively light. There is no personal income tax applied to Saudi citizens, nor is there a VAT. At the same time, the Saudi authorities have made efforts to diversify the tax regime, particularly in the area of corporate taxation.2 A comprehensive state revenue law was introduced in 2005 and further amended in 2010.3 Nevertheless, it has proved difficult for the authorities to justify raising non-oil revenues at a time when the overall fiscal balances have been in surplus and oil prices have continued to rise. Furthermore, raising non-oil tax revenues could in part undermine other policy objectives, notably diversifying the economy and increasing private sector employment.

3. Revenue volatility has posed considerable difficulties for the Saudi authorities. A short-lived drop in oil prices in 2009, which led to an overall deficit of 5.4 percent of GDP, highlighted the fiscal vulnerabilities associated with oil price shocks. Revenue volatility has also interacted with extended periods of depressed oil prices to complicate fiscal policy management. During the 1980s and 1990s, the oil price remained low for a sustained period of time, and government debt increased sharply.4

5. To partly address this difficulty, in recent years the Saudi budget has been based upon conservative assumptions for both the oil price and expenditures. As the fiscal year has unfolded and revenues have invariably over-performed relative to initial conservative assumptions, additional expenditures have been approved. As a consequence, the Saudi budget has been consistently lower than the actual out-turn by a considerable margin. Since 2006, actual expenditures have been, on average, some 26 percent higher than budgeted expenditures (Figure 3).

6. This conservative budget formulation strategy has helped contain expenditure volatility. In terms of real expenditures, volatility has fallen significantly over the last twenty or so years. During the period 1998–2004, the variance of real expenditure growth was 1.8. During 2005–12, the variance had fallen to 0.4. However, additional within year budget expenditures continue to move pro-cyclically with respect to oil prices. A simple comparison between changes in oil prices and the additional within year expenditures suggests a strong positive relationship (Figure 4).

8. There is some evidence that the flexibility of this buffer has weakened over time. In 2006, purchases of goods and services accounted for almost 80 percent of additional within year expenditures. This ratio declined to around 40 percent in 2012, while the proportion of additional within year expenditures allocated to capital items has increased to 40 percent, and compensation of employees accounted for 20 percent. Both capital and wage expenditures are budget items that involve multi-year commitments and should be included in the initial budget assessment.

9. An examination of the Saudi fiscal stance over the last ten years highlights the strengths and weaknesses of the current risk management strategy. To provide an overall assessment of the recent fiscal stance it is important to rely on several fiscal indicators. In oil producing countries, the overall or primary balances are not a good guide for assessing the fiscal stance, as they do not adequately capture the impact of policy changes on aggregate demand or on adjustment efforts since exogenous changes in oil prices dominate any changes in fiscal policies.

11. In Figure 5, structural revenues are calculated by assuming that the long-term oil price is the average oil price from the past five years. Long-term oil output is computed as a three year moving average including the current year. Based on this rule, the authorities have achieved a slightly negative (-1.3 percent of non-oil GDP) structural balance on average since 2003, reflecting a significant structural deficit in the earlier years. A structural surplus has been achieved on average since 2006. In recent years, Saudi fiscal developments can be characterized as:

12. The non-oil primary balance also provides a robust guide to the impact of fiscal policy on aggregate domestic demand. Moreover, in line with the permanent-income-hypothesis (PIH), the authorities can target a non-oil primary balance that allows for the accumulation of savings for future generations as oil is an exhaustible resource. However, the PIH is sensitive to assumptions regarding future oil prices and other parameters, and can be difficult to explain to the public as a fiscal anchor when oil revenues are large.

13. Based on the non-oil primary balance, the government has begun to set the budget on an adjustment path. The non-oil primary deficit narrowed slightly in 2012 and is expected to fall significantly further in 2013 as expenditure growth slows. Considering the PIH, the actual non-oil primary deficit (projected at 56.6 percent of non-oil GDP in 2013) is considerably higher than would be required to accumulate enough savings for future generations (Figure 6). In this context, it is useful to note that the non-oil current balance has remained relatively steady in recent years, as public investment has increased. To the extent that government expenditure is directed toward productive investment and generates returns and tax revenues, it would reduce the fiscal adjustment that is needed for intergenerational equity purposes.

14. In order to look beyond the fiscal risks presented by changes in oil prices and the overall fiscal stance, a set of Saudi fiscal indicators is compared to a peer group of emerging market economies. The choice of indicators was based on a consistent conceptual framework developed by Baldacci et al (2011). These indicators are grouped into clusters which seek to answer three key questions regarding fiscal sustainability:

15. For each indicator, a crisis threshold is estimated on the basis of a univariate procedure that maximizes the likelihood of predicting a fiscal crisis. This threshold, when exceeded, indicates a higher degree of fiscal stress. In order to make the data comparable across indicators, the data is expressed as Z-scores, where the score for fiscal variable x at time t is defined as:

where σx and is, respectively, the standard deviation and mean of the fiscal indicator for peer group of emerging economies covering the period 2001–11.

16. The assessment of the fiscal risks facing Saudi Arabia shows a relatively comfortable fiscal position. The distribution of out-turns for a peer group of emerging economies are plotted for each indicator, along with the out-turn for Saudi Arabia, as well as the risk threshold (Figure 7 and 8).

17. If oil prices were to moderate over the medium-term, this would have implications for Saudi fiscal policy and could weigh on growth. In this scenario, the authorities would have to consider whether to slow real expenditure growth while continuing to smooth expenditures to account for ongoing revenue volatility. Over the forecast horizon (2013–18), assuming the authorities continue to spend in line with structural revenues, real expenditures would be broadly flat on average. This is in contrast to the annual growth in real expenditure of over 11 percent in recent years (Figure 9).

18. Slower expenditure growth will have implications for the broader economy. Estimated short-run fiscal multipliers of about 0.2 would indicate a downward drag on non-oil GDP growth of almost 1¾ percent in the near-term; a long-run multiplier of 0.5 indicates a downward drag of 4½ percent over three years (Espinoza and Senhadji, 2011).

19. Looking beyond smoothing oil price volatility, the authorities will need to consider issues of intergenerational equity. Fiscal buffers, while large, are consistent with what would be needed for precautionary reasons to smooth oil price volatility. Saving for future generations would likely require additional accumulation of assets, although this could be partly offset by returns from public investment.

20. Oil price volatility has long been the key risk factor for fiscal policy in Saudi Arabia. As recently as 2009, a sharp fall in prices pushed the overall balance into a deficit of just over 5 percent of GDP compared to a surplus of almost 30 percent of GDP recorded in the previous year. Notwithstanding the large revenue shock in 2009, Saudi Arabia has enjoyed a period of strong oil revenue growth. This has permitted a sizable increase in real public expenditures, the accumulation of public savings and international reserves, and the near elimination of the public debt that was built up during the 1980s and 1990s when the oil price was low. Government deposits in the banking system increased to approximately SAR 1.5 trillion at end-2012, equivalent to nearly 20 months of expenditure. As a consequence, the fiscal position has strengthened enormously and the authorities are in a position to smooth a temporary decline in oil prices.

22. In principle, oil price volatility could be managed within the budget planning process, by setting the expenditure envelope in line with an estimate of “structural” oil revenues. This would provide the basis of a more explicit medium term expenditure strategy which could enhance expenditure efficiency.

This experience, when oil revenues were subdued for an extended period, underscores the magnitude of fiscal buffers available to the authorities. Should lower oil revenues result in a depletion of the current stock of foreign exchange reserves, the authorities could in principle return to capital markets.

This approach computes “structural oil revenues” on the basis of a “long-term oil price” and “long-term oil output”. Revenues that are in excess (below) the structural revenues are considered to be the cyclical or non-structural component of revenues. A structural balance of zero, which matches expenditures to structural revenues, builds up precautionary saving buffers in years when prices are above the long term price. For additional details, see “Macroeconomic Policy Frameworks for Resource-Rich Developing Countries”, IMF Policy Paper, 2012. 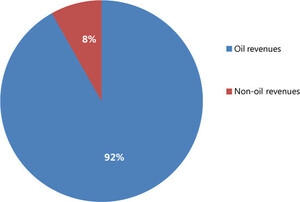 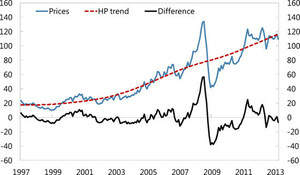 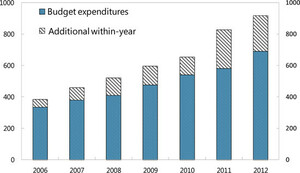 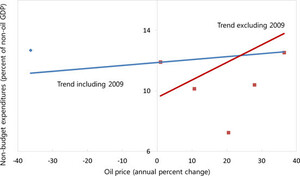 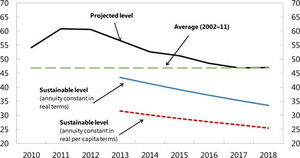 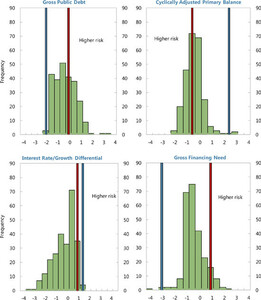 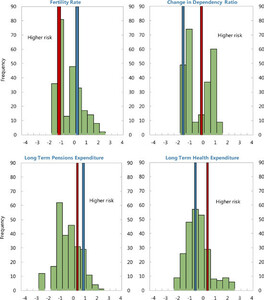 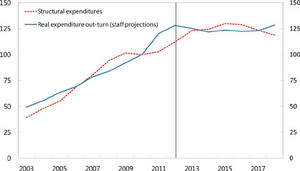