Oil remains the most important energy source in the global economy, accounting for approximately one third of total global energy consumption. Consequently, it comes as no surprise that disturbances in the oil market have the potential to significantly impact global economic activity. Saudi Arabia, the world’s largest producer and exporter of oil, has long played a systemically important role in the global oil market. In particular, with its unique ability to relatively quickly raise production due to its sizable spare capacity, Saudi Arabia is a stabilizing force in case of oil supply disturbances. This chapter attempts to quantify the importance of Saudi Arabia for the global economy, using both event studies and model simulations.

A. A Historic Perspective of Saudi Arabia in the Global Oil Market

1. Saudi Arabia is a central player in the global oil market. Over the period 1990–2011, Saudi Arabia produced over 78 billion barrels of oil (approximately 13 percent of global supply). This is significantly more than both Russia and the U.S. which come in second and third place with cumulative production levels of 70 and 60 billion barrels, respectively (see Table 1). Moreover, Saudi Arabia accounts for 16 percent of global proven reserves, lagging only Venezuela at 18 percent. However, Venezuelan reserves are generally viewed as less easily accessible and more costly to extract. Finally, and perhaps more importantly, Saudi Arabia has the ability over a short amount of time to substantially increase its supply to the global oil market. With a spare production capacity of over 2 million barrels per day (mbd), Saudi Arabia accounts for over 50 percent of global spare production capacity and can raise global oil production by over 2 percent within 30 days (roughly equivalent to Korea’s total consumption).2 In addition, to ensure smooth delivery of crude exports in case of transportation disruptions or other market disturbances, Saudi Arabia keeps large quantities of oil in storage facilities in the Mediterranean, northern Europe, and Asia to meet customer demand.

2. Over the past four decades, swings in Saudi Arabia’s oil production and changing export patterns have reflected evolving policy objectives as well as global demand and supply trends (Figure 1).

5. Model simulations can help us better understand Saudi Arabia’s stabilizing role in the current global environment. The event studies above illustrated how Saudi Arabia responded to supply disturbances in the past. However, since there are multiple factors simultaneously impacting the outcome, it is difficult to understand to what extent the interventions by Saudi Arabia helped stabilize the market or what the counterfactual scenario would have looked like (i.e., if Saudi Arabia had not filled part of the demand gaps). Using a model based approach, however, helps us work around these problems. More importantly, model simulations facilitate a way of measuring Saudi Arabia’s importance not only to the oil market but also to global economic activity.

6. The systemic role played by Saudi Arabia in the context of a global oil supply shock can be analyzed using the IMF’s Global Economy Model (GEM). GEM is a multi-region, multiple-good model of the world economy that incorporates the global oil market. The model consists of six regions: the United States, Euro Area, Japan, Emerging Asia, Latin America, and the rest of the world (Box 1). The mechanism through which oil prices affect the global economy is fairly straight forward. A large negative oil supply shock causes oil prices to increase, resulting in higher costs of production (particularly in sectors that are oil intensive) and thus translates into a negative shock to aggregate supply. The increase in the oil price also has a direct impact in consumer prices causing headline inflation to rise.

GEM is a multi-region, multiple-good model of the world economy that is derived from optimizing foundations.1 In each region there are households, firms, and a government. Households maximize utility derived from the consumption of goods and leisure. Firms combine capital and labor with either oil/commodities or land to maximize the net income from goods production. Governments consume goods financed through non-distorting taxes and adjust short-term nominal interest rates to provide nominal anchors.

Households are infinitely lived, consume goods, and are the monopolistic suppliers of differentiated labor inputs to all domestic firms. Households exhibit habit persistence in consumption contributing to real rigidities in economic adjustment. Monopoly power in labor supply implies that households’ wages contain a markup over the marginal rate of substitution between consumption and leisure. Because of adjustment costs in wage contracts, aggregate nominal rigidities arise through wage bargaining. Households own all domestic firms, the domestic capital stock, and the land, which they rent to domestic firms. The markets for capital and land are competitive. Capital accumulation is subject to adjustment costs that contribute to gradual economic adjustment. The supply of land is fixed.

Firms produce three types of goods: a nontradable good; a tradable non-commodity good; and two tradable commodity (oil and non-oil) goods. Goods are assumed to be differentiated, leading to market power that enables firms to charge a markup over the marginal cost of production. Goods prices are subject to adjustment costs that, along with slowly adjusting wages, give rise to the gradual adjustment of prices to economic disturbances. The characteristics of the final bundle of goods consumed in each region reflect the preferences of households and firms over all goods and, consequently, international trade is driven by the interaction of preferences and relative prices.

Capital, labor, and commodities are combined to produce the tradable non-commodity good and the non-tradable good. The production process is given by:

where Y denotes the output of the non-commodity tradable good and the non-tradable good, A denotes the level of productivity, K is the capital input, L is the labor input, QC is the domestically produced commodity inputs, and MC is the imported commodity inputs. The production technology, f, embodies constant elasticity of substitution. For this application, non-commodities goods production is calibrated to be Cobb Douglas. Producers have a very high elasticity of substitution between imported and domestically produced commodities capturing the notion of a single world market for commodities.

Commodities are produced combining capital, labor, and a fixed factor, land. The production technology is given by:

where QC is domestically produced commodities, A denotes the level of productivity, K represents the capital input, L denotes the labor input, and Land is the fixed factor. The production technology, f, embodies constant elasticity of substitution. For this application, Land is calibrated to be the most important input into commodities production and the elasticity of substitution among land, labor, and capital is low.

Parameter values for GEM are derived through calibration. Specific parameter values are determined by balancing several factors: empirical estimates available in the literature, the desired steady-state characterization of the economies, and the model’s dynamic adjustment properties. Behavioral parameters that do not affect expenditure shares or trading relationships have been set identically in all countries/blocks. Nominal and real adjustment cost parameters are also identical although nominal and real dynamics will differ because of different proportions of liquidity constrained households and different markups in goods and labor markets.

1 For a detailed description of GEM’s structure and dynamic adjustment properties see Laxton and Pesenti (2003), Hunt (2005), and Hunt and Rebucci (2005).

7. In the model, an oil supply shock is considered that broadly matches Saudi Arabia’s spare production capacity. This is done to ensure that Saudi Arabia can realistically increase its oil production to completely fill the residual excess demand. Hence, the magnitude of the supply shock is set to 2 percent of global oil supply. Notice that the size of this shock is also broadly consistent with two of the event studies considered above (i.e., the twin shocks of 2003 and the Libyan crisis in 2011).

8. The simulation results illustrate the importance of Saudi Arabia to the global economy (see Table 2 and Figure 6). Three different scenarios are analyzed depending on how Saudi Arabia responds to the initial global oil supply shock in filling the residual excess demand: (1) Baseline—no response, i.e., Saudi Arabia does not increase production (black solid line); (2) Saudi Arabia fully replaces the lost output from the second quarter (blue line), this would be broadly consistent with the Venezuelan strike in 2002–03; and (3) Saudi Arabia gradually replaces the lost output over the length of a year (the Libyan crisis) (red dashed line).

9. Saudi Arabia is an important stabilizing force in the global economy. With control of over half of existing global spare production capacity, Saudi Arabia remains the only country in the world that can relatively quickly respond to supply disturbances. Event studies of the First Gulf War, the twin oil shocks in 2003, and the Libyan crisis suggest that Saudi Arabia has indeed used its spare capacity to mitigate supply shocks in other countries. Furthermore, simulations using the IMF’s Global Economy Model show that Saudi Arabia plays a systemically important role in the current global economy should there a significant oil supply disturbance.

10. Over the medium term, Saudi Arabia will retain a central position in the global oil market that will be shaped by both supply and demand factors. On the supply side, unconventional production technologies have resulted in a significant increase in projected oil and gas production in North America over the medium term, possibly leading to a decoupling of the western hemisphere from the rest of the global oil market. On the other hand, continued geopolitical uncertainties in the Middle East and North Africa represent downside risks to the global oil supply outlook. Uncertainties are also significant on the demand side. Although, the shale gas revolution in North America has primarily caused a shift away from consumption of coal, it could also reduce demand for oil products going forward. Furthermore, uncertainties in global demand growth and divergence in growth patterns (slow growth in Europe, moderate growth in the U.S., and stronger growth in emerging market economies) will shape the demand outlook. All these factors, in addition to strong domestic consumption growth, are likely to affect the position of Saudi Arabia in the global oil market.

The data on spare capacity numbers for 2012 are taken from IEA which reports capacity levels that can be reached within 30 days and sustained for 90 days.

In an interview in 1998 with SPA (Saudi Press Agency), Minister of Petroleum and Mineral Resources Al-Naimi stated that Saudi Arabia had abandoned the role of swing producer in the 1980s because it had resulted in the loss of both market share and large oil revenues.

Oil price volatility is measured as the standard deviation of detrended oil prices over a 30-day period. The daily oil data is detrended using the HP-filter with a smoothing parameter of 100,000.

To some degree, one could consider the third and fourth volatility spikes as related to the short and temporary decline in volatility at the beginning of September.

The GEM Simulations in this section were prepared by Keiko Honjo.

The Venezuelan General Strike and the Second Gulf War, 2002–03 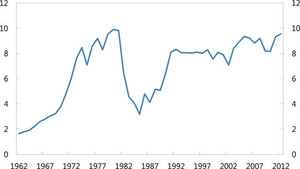 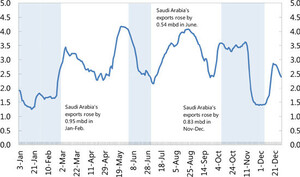 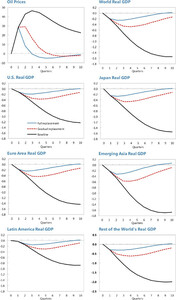