1. Oil revenues boosted Iraq’s sovereign reserves during the past ten years. Iraq’s monetary reserves (held by the Central Bank of Iraq, CBI) and fiscal reserves (maintained in the Development Fund for Iraq, DFI) grew strongly over the past ten years, reaching $18 and $70 billion respectively by the end of 2012. Reserves are financed almost exclusively from oil revenues which account for over 90 percent of both export receipts and government income. Since Iraqi law prohibits government borrowing from the CBI, official international reserves play no role in financing the government.

2. The rapid growth of Iraq’s sovereign reserves has prompted discussions within Iraqi policy circles about their appropriate level and how best to manage them. This note addresses these questions, drawing on the experience of other natural-resource rich countries.

B. The Current Set-Up for the Management of Iraq’s International Reserves

3. Post-2003, Iraq set up a two-tier architecture to manage its international reserves. Monetary reserves are managed by the CBI and kept in highly liquid assets or cash, following the investment guidelines developed with the help of the Fund. Fiscal reserves are held in the DFI, which was established in 2003 by the UN Security Council Resolution 1483 as a way of accumulating Saddam-era frozen assets, monitoring its oil revenues and ensuring the payment of war compensations to Kuwait. Also, to enhance the protection of Iraqi assets from debtors and other claims, the resolution gave multilateral immunity to the DFI, which expired in 2011 (Iraqi assets are protected by general U.S. immunities on sovereign assets, and by special immunities granted by the U.S. in 2003).

4. The DFI has been the most successful fiscal institution in Iraq. The DFI is an account held by the CBI at the Federal Reserve Bank of New York on behalf of the Iraqi Finance Ministry. All Iraqi oil export receipts are deposited directly by the buyers into the Oil Proceeds Receipt Account (OPRA). After an automatic 5 percent deduction for Kuwait war compensations mandated by the UN is applied, revenues are transferred to the DFI. Payments out of the DFI are carried out against checks signed by the Minister of Finance and the Prime Minister of Iraq, including for financing government imports and other foreign expenditure. Over the past years, the Iraqi government has directed investment partners to credit the account with other types of payment, such as oil contract signature bonuses or mobile phone license fees.

5. The DFI is designed to maximize transparency. From its creation, the DFI was subject to robust international oversight, which was later transferred to the Iraqi authorities on June 30, 2011 when the original DFI structure created under the UN mandate expired. The authorities decided to maintain the DFI essentially unchanged. The account is audited twice a year by an international audit firm selected by a supervisory board, previously co-chaired by the UN and the Iraqi Government and now chaired by the Iraqi Board of Supreme Audit. The audit results are published on a dedicated website (www.cofe-iq.net/pages/e_home.htm).

6. The DFI has helped Iraq absorb negative oil price shocks. While originally conceived as a transit account, the DFI has been operating as a de facto stabilization fund, allowing the government to accumulate reserves through strong fiscal performance in boom years, and financing spending when oil revenues fall short. Thus, the government drew resources from the DFI to avoid slashing spending, especially on current expenditure, following the 2008 oil price shock. As a result, the DFI was almost depleted in the course of 2009, declining from $27 billion in August 2008 to $7.7 billion in June 2009.

7. Oil revenues feed the DFI and are partly transferred to the CBI reserves through government spending. Oil revenues which accumulate at the DFI as fiscal reserves become international reserves of the CBI when the government repatriates the foreign exchange and sells it to the CBI to finance domestic spending. The foreign currency amount adds to the international reserves of the CBI, and domestic currency spent by the government increases domestic currency liquidity in the economy, which in turn creates demand for foreign exchange. Given the high dollarization of the economy, the size of the additional demand for foreign currency (the rate of transformation of the DFI reserves into CBI foreign assets) is estimated by staff at about 40-50 percent of domestic government spending assuming that (a) a large share of goods consumed by households is imported, (b) durable consumption goods and real estate are paid in dollars, and (c) most savings, except for small working balances, are converted into dollars or directly transferred abroad given the lack of confidence in the banking system and the limited investment opportunities.2

8. Central bank international reserves are adequate. The level of reserves meets with large margins standard measures of adequacy (months of imports, ratio of short-term foreign currency obligations, and coverage of monetary aggregates).3 Maintaining extra buffers compared to the standard thresholds for these metrics is justified in light of the exceptional political and security risks in the country and in the region and the dependence on a single source of balance of payments revenues. Over the medium term, as Iraq’s difficult situation and oil sector dominance is likely to continue, maintaining these buffers would require rising absolute levels of international reserves that broadly keep the metrics at their current range.

9. But, fiscal buffers are not yet sufficient to withstand large oil revenue shocks. At $18 billion, or 6 months of salaries and pensions at end-2012, Iraq’s current fiscal buffers held in the DFI would be sufficient to absorb a relatively small short term revenue shocks (as laid out in the downside scenario of the 2013 Article IV Staff Report) without socially destabilizing disruption to public finances. Buffers are not sufficient, however, to absorb a shock of the magnitude of the 2008 oil price shocks, or a collapse in production or exports that severely limits Iraq’s earnings in foreign currency. Staff projections show that building adequate buffers would only be possible over the medium term. As a result, excess reserves, i.e., reserves over and beyond the level of fiscal buffers, would not be accumulated in the foreseeable future.

11. The current reserve management set-up prioritizes liquidity and is appropriate for CBI reserves and DFI buffers. The main criterion for managing monetary reserves and countercyclical fiscal buffers is liquidity, rather than profitability. The current set-up, which conservatively allocates these assets in high quality sovereign instruments meets this criteria, and is supported in the CBI by investment guidelines developed with the help of Fund technical assistance.

12. A Sovereign Wealth Fund (SWF) could help manage excess fiscal reserves more aggressively. SWFs can be defined as “pools of government-owned or controlled assets that include some international assets (Truman 2011). In many resource-rich countries, SWFs have emerged as the main vehicle for managing reserves, especially fiscal reserves, with the purpose of generating long term income and providing for future generations. Emerging resource exporters also use SWFs to generate returns abroad which cannot be productively invested at home. In addition, SWFs absorb excess liquidity and reduce inflationary pressure, which are typical macroeconomic challenges in natural resource-rich countries due to the size of export revenues (Das et al. 2010).

13. SWFs represent a broad category that encompasses a variety of different types of financial vehicles. There are over 51 SWFs in 44 countries today, with $3.3 trillion of assets under management. Over 86 percent of SWF resources are held in foreign assets. With the exception of the five SWF in Asia, SWFs assets (over 70 percent of the total) are financed from natural resource revenues (Truman 2011).

14. International examples can be useful for the case of Iraq. SWFs differ along several dimensions:

E. Conclusions and Implications for Iraq

15. Iraq’s sovereign reserves are high, but should be increased further. Based on several metrics, the level of international reserves held by the CBI appears adequate. Additional fiscal reserves are, however, needed, in order to maintain adequate buffers, especially given the lack of market access and the prohibition of central bank lending to the government. Furthermore, liquidity should be the main priority in managing CBI and DFI reserves.

16. The current two-tier architecture is appropriate for the foreseeable future. CBI reserves should continue to be managed prudently, following the CBI investment guidelines. The existing typology of SWFs shows that the DFI is already a de facto SWF which carries out mainly stabilization and, to a lesser extent, savings functions. Compared to other SWFs of this type, the DFI has characteristics which make it particularly suited for Iraq’s needs. First, it offers a simple and transparent revenue account. Second, by eschewing dedicated funding and withdrawal rules, it preserves the integrity of the budget process. Third, the DFI has greater political sustainability than a separate SWF would, thanks to its low profile/visibility and relatively long history, and is less likely to attract rent-seeking attention than a dedicated vehicle with a specific spending agenda. At the same time, the DFI—in its present form of stabilization fund—could be further strengthened through new features such as investment policies and guidelines, as Iraq’s capacities in these areas evolve.

17. Relatively marginal modifications to the DFI should be sufficient to manage excess reserves. Should excess reserves be accumulated beyond an adequate level of fiscal buffers, modifications along the lines of other SWFs could be considered to increase the rate of return on excess reserves. Achieving this objective should be possible by modifying the current framework without changing its main features, for example, by adding a high-return subaccount appropriately ring-fenced from the fiscal buffers.

Government imports of goods and services and other foreign payments, such as debt service, are financed directly through the DFI.

See External sector analysis in Appendix I of the 2013 Article IV Staff Report.

DFI and CBI: Flows and Stocks of Iraq’s Oil Revenues in 2012

(In billions of U.S. dollars and trillions of Iraqi dinars) 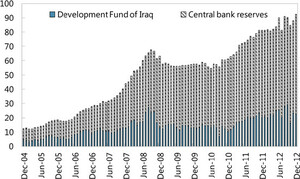 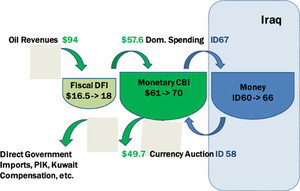 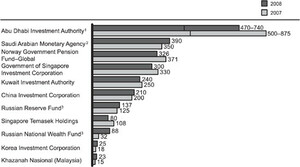