1. Iraq faces large fiscal policy challenges following more than 30 years of sanctions and conflict, which have resulted in very large infrastructure and social needs. Iraq needs to transform resource wealth into assets that support sustained reconstruction and development, while adopting mechanisms to avoid the boom-bust cycles that stem from volatility in natural resource revenues. This paper applies tools to assess long-term fiscal sustainability,2 and proposes a fiscal policy framework to improve macroeconomic management of the economy, including a procedural fiscal rule to help delink the budget process from fluctuations in international oil prices.

2. Iraq’s government plays the central role in channeling oil revenues into the domestic economy. The government receives one-hundred percent of Iraq’s oil export revenues, and in turn decides how much to save abroad or channel into the domestic economy via government spending. Thus, the chosen expenditure path has a substantial impact on macroeconomic developments in the non-oil economy, macroeconomic stability, and intergenerational equity.

B. Characteristics of a Fiscal Framework

3. A medium-term fiscal plan for Iraq should ensure solvency. This entails assessing whether the medium-term spending path is consistent with long-term fiscal sustainability, and it is tied to exhaustibility of oil reserves based on Iraq’s oil wealth and its exploitation.

4. Iraq’s ambitious spending plans need to be also balanced against implementation capacity and financing constraints. The authorities aim at boosting non-oil investment as much as possible. For instance, in 2013, the budget authorizes capital spending allocations of 40 percent of non-oil GDP. However, based on past experience, such investment levels may not be possible because of low capacity and economic absorption constraints.

5. A medium-term fiscal framework should address Iraq’s vulnerability to fluctuations in international oil prices. With oil export revenues accounting for more than 90 percent of total government revenues, and fiscal buffers at only about six months of salaries and pensions in 2012, Iraq is highly vulnerable to oil price volatility. Revenue vulnerability is exacerbated by the high degree of concentration of both production and export infrastructure, 70 percent of which is concentrated in the Basra province alone. Moreover, Iraq’s budget structure is skewed towards non-discretionary current expenditure, which would make it difficult to adjust to sustained revenue shocks through expenditure adjustment. This vulnerability has increased over the past few years as the gap between the break-even and budget oil price narrowed considerably, resulting in one of the highest fiscal break-even oil prices in the region at $102 per barrel in 2012.

6. Thus, the dependence of government revenues on a single source of revenue requires high levels of fiscal buffers. For Iraq, useful measures for the level of fiscal buffers are (a) coverage of current spending (e.g., salaries and pensions), which reflects how much of the short term government obligations can be financed in case of a complete shortfall of oil revenues; and (b) coverage in terms of lower oil prices or oil export volumes than projected under the baseline scenario in any given year, which indicates the share of government spending that can be financed by the buffers in case of shocks to oil markets resulting in a fall in oil revenues.

7. Currently, fiscal buffers are not yet sufficient to withstand large oil revenue shocks. At $18 billion, or 6 months of salaries and pensions at end-2012, Iraq’s current fiscal buffers held in the Development Fund for Iraq (DFI) would be sufficient to absorb a relatively small short term revenue shocks (as laid out in the downside scenario of the 2013 Article IV Staff Report) and help avoid a socially destabilizing disruption to public finances. Buffers are not sufficient, however, to absorb a shock of the magnitude of the 2008 oil price shocks, or a collapse in production or exports that would severely limit Iraq’s earnings in foreign currency.

8. Fiscal policy should be formulated to delink expenditures from volatility of oil revenues. As the government channels oil revenues generated abroad through government spending in the domestic economy, domestic demand is affected. The Non-oil Primary Balance (NOPB) is a good measure to assess this impact, since focusing on the overall balance or expenditure levels as a percent of total GDP would be misleading.5 For instance, following a 40 percent decline in oil prices in 2009, the overall fiscal deficit increased to 13 percent of GDP compared to 1 percent in 2008. Likewise, total expenditures increased by 2 percent of GDP. However, the non-oil primary deficit declined by almost 20 percent of non-oil GDP, mostly because of a 19 percent of non-oil GDP decline in capital spending, showing the true contractionary fiscal stance adopted by the authorities.

9. Various policy analysis tools can help enhance IMF policy advice for Iraq.3 While the estimates of these models are subject to large parametric uncertainty and data weaknesses, they provide a useful framework to look at the impact of fiscal policies on sustainability of government non-oil spending trends.

10. The PIH model can help assess long-term fiscal sustainability. Staff used assumptions that are consistent with the baseline scenario laid out in the 2013 Article IV staff report. The scenario is predicated on the implementation of prudent fiscal policies. Key assumptions include:

12. The results suggest that Iraq’s medium-term fiscal policies as outlined in the baseline scenario are broadly consistent with long-term fiscal sustainability. The PIH benchmarks yields constant primary expenditures of about 60 percent of non-oil GDP over the long term, compared to estimated non-oil revenues of 9.5 percent of non-oil GDP, yielding a non-oil primary fiscal deficit of about 50.5 percent of GDP. Iraq’s medium term projected medium-term expenditures are broadly in line with these results. Projected non-oil primary expenditures are significantly higher than the benchmark PIH expenditure levels in 2013-2016, but converge towards the benchmark level by 2017-2018.

13. Application of the Modified Permanent Income Hypothesis (MPIH) model can help quantify the potential risks of ‘scaling up’ expenditures. While a ‘scaling up’ of social and infrastructure spending may have growth-enhancing effects, its impact is highly uncertain because of low implementation capacity and a volatile domestic and regional context. The MPIH model, which allows for ‘scaling up’ of spending over the medium term that is followed up by a ‘scaling down’ of spending to preserve long-term wealth, computes the necessary fiscal adjustment if the “scaled-up” spending does not result in higher growth. The need to save in later years could be lessened by a positive growth and tax revenue impact of the additional investment spending upfront, which are conservatively assumed at zero in the model.

14. The MPIH model is useful to look at the long-term impact of front-loading investment. The model allows for front-loading investment in 2013-2018 by an average of 5.5 percent of non-oil GDP, which is the difference in annual spending between the baseline medium-term scenario and the spending levels derived from the PIH simulation, to quantify the ‘scaling up’ scenario. Thus, the MPIH scenario allows for an increase in annual spending equivalent to about 5.6 percent of non-oil GDP on average for 6 years (front loading investment period in accompanying chart). The period of front-loaded spending then needs to be compensated by an annual improvement in the NOPB of 3 percent of non-oil GDP on average smoothed from 2020 until 2031 (MPIH adjustment period in accompanying chart). The model sets the future value in 2032 of the front-loading and adjustment periods equal to preserve long-term wealth. Spending levels return to PIH-consistent levels from 2032 until 2045.

15. Fiscal rules could help delink budget formulation from volatility in international oil markets. A procedural rule, outlining steps to be followed during the budget preparation process, would be relatively simple to implement. In addition, since 2004 the authorities set conservative oil price and export volume assumptions in the context of IMF-supported programs.

16. The authorities could adopt the budgeting procedures based on financial programming that were used during past IMF programs. This approach could include the following steps when determining the medium-term budget envelopes, such as:

17. Iraq could, in principle, benefit from adopting a structural primary balance rule based on oil price smoothing. Experience in a number of resource-rich countries suggests that numerical fiscal rules can help maintain sustainability and support macroeconomic stability. Over the medium-term, Iraq could adopt a numerical fiscal rule to help mitigate the impact of oil price volatility on the budget, and build buffers. The first step is to compute the structural oil revenues by forecasting oil revenues by deliberately adopting conservative oil price assumptions. The second step is to target a specific NOPB using the structural revenues projections. This rule would be simple to implement, and easy to communicate to the general public and parliament.

Rule 1: 5-year moving average of the past 5 years. This rule can track changes in prices, but may result in volatile spending envelopes and pro-cyclical fiscal policy (light blue line).

Rule 2: Simple average of past 5 years, the current year, and the future 5 years (as Trinidad and Tobago) (red dotted line).

Rule 3: A 16-year moving average of oil prices (prices for the past 12 years, projected prices for current and next 3 years) (as Mongolia). This rule attaches high weight to past prices and allows a more gradual incorporation of future prices (black line).

19. Simulations of these three rules illustrate the potential challenges in implementing these rules in times of large oil shock (2009) or declining oil prices (2013-2018). The simulation results are affected by the large drop in oil prices in 2009, and the subsequent rebound in 2010-2012. The 2010-2012 price levels get carried over to the oil price formulas in a declining oil-price outlook for 2013-2018. Thus, further work is needed to calibrate an oil-price smoothing formula that is realistic, simple to compute, and projects fiscal outturns consistent with the overall expenditure path envisaged in the medium-term policy scenario of the 2013 Article IV report.

21. The authorities have a good window of opportunity to codify key Public Financial Management (PFM) reforms as part of their present process to redraft the Public Financial Management Law. Moreover, the authorities should redouble their efforts in enhancing PFM practices by implementing IFMIS, refraining from off-budget spending, and improving investment planning and execution, debt management, and fiscal reporting.

For a discussion and applications of the NOPB, see Barnett and Ossowski (2002) and Villafuerte and Lopez-Murphy (2010).

For more information on the formulas, see IMF (2012b).

(In percent of non-oil GDP)

(In percent of non-oil GDP) 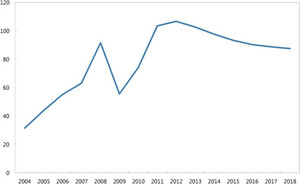 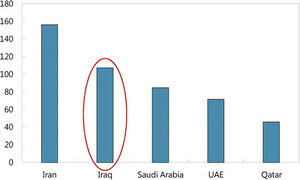 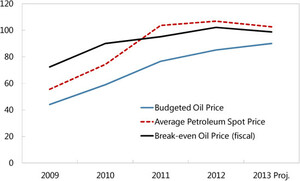 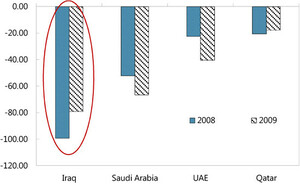 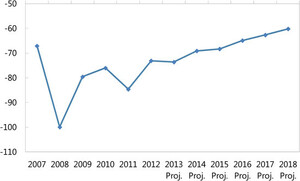 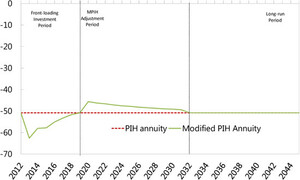 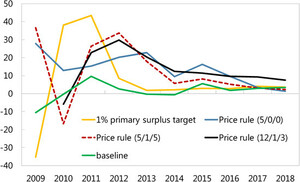 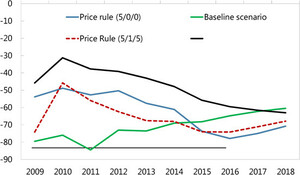 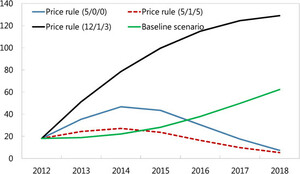