1. Over the last decade, Iraq has become one of the world’s leading oil producers. At approximately 143 billion barrels, Iraq’s proven oil reserves rank fifth largest in the world, after Saudi Arabia, Venezuela, Canada, and Iran.2 Since the collapse in production in 2003, when it fell to 1.3 million barrels per day (mbpd), production has risen steadily, reaching 2.95 mbpd in 2012. Last year, Iraq contributed over 3 percent to the global supply of 90 mbpd. Iraq is currently the second-largest OPEC oil producer and the third-largest oil exporter in the world, and oil GDP is at levels comparable to other energy-exporting countries in the region. Oil revenues have been boosted since 2011 by oil prices above $100 per barrel, driven by continued geopolitical uncertainty and low spare supply capacity.

2. In the medium term, Iraq’s expansion of oil production is expected to continue, making the country a key contributor to global market supply. Production and export trends are however vulnerable to significant risks, principally failure to expand export infrastructure and a worsening in the political and security situation. Moreover, the envisaged ramp-up in production could weigh on global supply capacity and depress prices, particularly in case of lower-than-expected global demand. This paper describes the structure of the Iraqi oil industry, recent developments and medium-term prospects.

3. Iraqi oil production is highly concentrated in a small number of large oil fields. Oil production is broadly concentrated in the south (which contains about 60 percent of the reserves) and the north of the country (with 17 percent of reserves), and is dominated by a few very large oil fields. Of total production of 2.95 mbpd in 2012, about 2.1 mbpd were produced in the southern fields and 0.76 mbpd in the northern fields. The super-giant southern field Rumaila produced 1.3 mbpd, output of other southern fields reached 0.8 mbpd, including 0.45 mbpd from West Qurna 1 and 0.26 mbpd from Zubair. Kirkuk and other northern fields produced on average about 0.6 mbpd. Market sources estimate oil production in the Kurdistan Regional Government (KRG) at about 0.23-25 mbpd in 2012, which includes average export contributions to the central government of 0.061 mbpd as well as oil produced for KRG internal consumption and direct exports to Turkey. At an average of $3.3 per barrel as estimated by the Ministry of Oil, crude production costs are low since all fields are onshore, in locations with favorable geology.

4. Most of the producing fields with the exception of Kirkuk are operated by international oil companies (IOCs). The Ministry of Oil and its regional branches control all oil production, but the fields are operated by IOCs under “technical service” contracts (as opposed to production-sharing contracts). These contracts specify the initial production target as well as the maximum remuneration fee per barrel, and envisage reimbursement to the IOCs for operating and investment expenses, plus remuneration fees of about $1-2 per barrel. The contracts provide IOCs with an option to be paid for services in-kind (in oil) or in-cash. Initially contracted aggregate target production was set at an ambitious 12 mbpd by 2017. However, currently the contracts are been renegotiated on a bilateral basis, to reflect more realistic production paths, with aggregate production likely to be lowered to about 8-9 mbpd.

5. In addition, the KRG has awarded disputed production-sharing contracts to IOCs. The validity of these contracts has been contested by the central government, on the grounds that only Baghdad is legally entitled to enter in contractual agreements with foreign oil companies. Exports from these contracts are however counted in total Iraqi exports. The KRG suspended the exports arising from related operations twice in 2012, following the prolonged disputes with the federal government over cost recovery payments to KRG producers and export revenue sharing. The hydrocarbon law, which was supposed to clarify uncertainties about jurisdiction of oil and gas exploration and development projects, has been under discussion since 2006 but progress has been scarce, in part because of the differences between the KRG and the central government.

6. Asia is the primary destination for Iraqi exports, both in absolute level and as a share of total exports. The share of export to Asia increased from 24 percent in 2005 to 53 percent in 2011, even though 2012 shows stabilization in market destinations. The shift in oil exports towards the east aims at capturing shares in a dynamic market, as demand from Asia has been increasing in the past few years against declining demand from Europe and relatively stable demand from North and South America. Furthermore, exports to Asia are more profitable since Iraqi oil enjoys a premium there.

7. Constraints to oil export volumes arise from export bottlenecks and technical production issues. Production is held back by technical challenges such as the need for water injection in the southern oil fields and limited supply of electricity, of which the oil industry is one of the main consumers. Export (and domestic transport) infrastructure has suffered during many years of decay due to sanctions and wars. Most of oil exports in the south are channeled through the offshore terminals at Fao peninsula, near Basrah. In the north, oil exports go through pipeline to the Turkish port of Ceyhan.

8. The Iraqi government is focusing on building up export infrastructure in the south, north, and west:

9. After the 2008-09 crisis, oil prices remained above $100 per barrel for most of 2011 and 2012. On the supply side, geopolitical uncertainty has been an important factor in keeping prices high, in addition to declining global inventories and low spare capacity.

10. Recently, Iraqi oil prices have performed better than the APSP benchmark. The discount on Iraqi oil price was $3-4 per barrel in 2009 and 2010. However, in 2011 this spread turned positive, with a premium relative to APSP of $1.2 per barrel in 2011, and $1.4 in 2012 on average. This positive development is related to the export shift towards Asian markets, which offer a premium compared to Europe and the United States owing to more limited competition and strong market growth.

11. The Iraqi crude is priced as an average of a benchmark oil price for 15 or 30 days from the bill of lading. The length of the pricing formula depends on the destination, with 15 days for exports to Europe, and 30 days to Asia and the U.S. Iraq uses different benchmarks depending on the export destination, namely Brent for its exports to Europe, a combination of Oman and Dubai for its exports to Asia, and the Argus Sour Crude Index (ASCI) for exports destined to the United States.

12. Domestic refinery capacity is very limited. Oil supply to domestic refineries was 0.59 mbpd in 2012 and 0.55 mbpd in 2011. According to the U.S. Energy Information Agency, the current nameplate capacity of refineries is around 0.95 mbpd, of which only 70 percent is operational.

13. Domestic production of other refined products such as gasoline, diesel, kerosene, and LPG is not sufficient to cover demand in Iraq. About half of the refined products in Iraq are heavy fuel oil which has a limited use. As a result, Iraq imports about 20 percent of consumed refined products, including over 30 percent of gasoline consumption, from neighboring countries.

14. Domestic production and consumption of oil derivatives benefit from generous subsidies. The fuel subsidies for 2011 are estimated at $9.8 billion, or 5.4 percent of GDP, up from $5.2 billion (3.9 percent of GDP) in 2010. 3 Crude oil is supplied to refineries at $1-2.5 per barrel, depending on the region. Then refineries output is sold to distribution companies at production cost plus 10 percent margin. The distribution companies sell refined products, both imported and domestically produced, to consumers at prices above cost-recovery, but below international market levels, which have remained constant since 2008.

16. However, the ramp-up in exports is subject to large risks. The increase in production and exports will mainly come from the southern fields. The envisaged production growth can be constrained by delays in onshore infrastructure development, and, in particular, by failure to expand pipeline, storage, and pumping capacity. Furthermore, oil companies continue to report that bureaucratic, logistical and operational constraints are posing significant challenges and delays to project work. In the north, oil exports from Kurdistan are contingent on resolution of the ongoing disputes with federal government over revenue sharing. Furthermore, projections are vulnerable to a deterioration in the political and security situation, which could especially affect export routes, as production is concentrated in relatively protected enclaves.

17. In the medium-term, Iraq’s expansion of oil production will make it a key contributor to the global market supply needed to meet the growth in energy consumption. The International Energy Agency projects medium-term global demand to increase to about 95 mbpd by 2017.4 However, the agency expects global production capacity to increase to approximately 102 mbpd in 2017, with OPEC producing about 37 mbpd. Iraq’s contribution to the increase in production capacity is 20 percent. Other sources of the increase in supply capacity include North American oil sands, light tight oil production, and NGLs. The discrepancy between supply and demand could lead to further downward pressure on prices, and, given Iraq’s role in increasing global supply, could lead to friction within OPEC. Iraq’s OPEC quota is currently suspended, but pressures to start negotiating quota are likely to intensify in line with increasing production.

Iraq has also large reserves of natural gas, which is however mostly flared.

(In millions of barrels per day)

(In thousands of barrels per day)

(In millions of barrels per day) 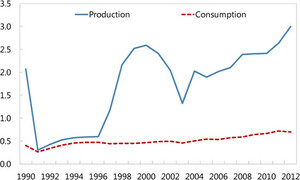 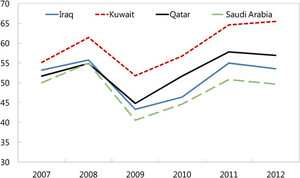 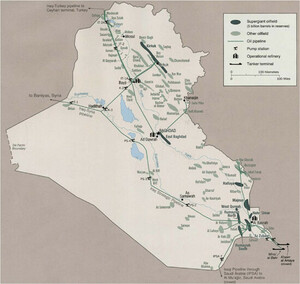 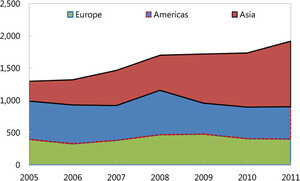 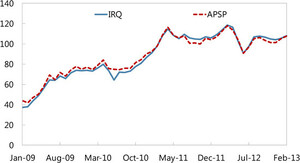 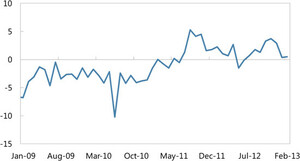 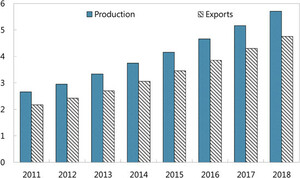 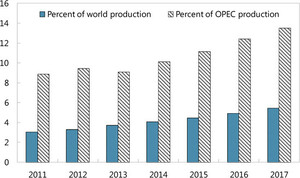