Jump to Content Jump to Main Navigation
Vanuatu: Staff Report for the 2013 Article IV Consultation—Informational Annex
Author: Regional Office for the Asia and the Pacific

Vanuatu has a comparatively favorable economy and cautious macroeconomic policies that have helped maintain stability and confidence. Financial sector policies also have been appropriately cautious. The economy must maintain low debt in the longer term, but as funding is needed for infrastructure, maintenance, and social services, new revenue measures have to be identified. This revenue could help strengthen the state while maintaining growth potential, especially in the tourism and agricultural sectors. The financing options for new large infrastructure projects have to be assessed.

Vanuatu has a comparatively favorable economy and cautious macroeconomic policies that have helped maintain stability and confidence. Financial sector policies also have been appropriately cautious. The economy must maintain low debt in the longer term, but as funding is needed for infrastructure, maintenance, and social services, new revenue measures have to be identified. This revenue could help strengthen the state while maintaining growth potential, especially in the tourism and agricultural sectors. The financing options for new large infrastructure projects have to be assessed.

(SDR million; based on existing use of resources and present holdings of SDRs)

Since 1988, Vanuatu has officially maintained an adjustable peg exchange rate arrangement. Currently, the exchange rate of the vatu is linked to a transactions weighted (trade and tourism receipts) basket of currencies. The weights and composition of the basket, which are not publicly disclosed, are adjusted periodically. The Reserve Bank of Vanuatu (RBV) quotes daily buying and selling rates for the vatu against the U.S., Australian, and New Zealand dollars; the euro; the U.K. pound; and the Japanese yen. The rate in terms of the U.S. dollar as of March 31, 2013 was VT 91.65 per U.S. dollar. The de facto classification is “other managed,” as the composite weights are not disclosed and cannot be confirmed. Vanuatu has accepted the obligations of Article VIII, Sections 2, 3, and 4, and maintains an exchange system that is free of restrictions on payments and transfers for current international transactions.

The most recent Offshore Financial Center Module II Assessment, conducted by MFD was concluded in May 2006.

The resident representative office for the Pacific Islands, including Vanuatu, was opened in September 2010 in Suva, Fiji. Mr. Yongzheng Yang is the Resident Representative.

During 2010 and 2011 PFTAC assisted with the upgrading of government finance statistics to the 2001 GFS Manual. Support is now being provided by a regional GFS project managed by STA and the authorities are now reporting data regularly to STA. PFTAC has provided ongoing assistance with peer review of annual GDP estimates, helped finalize and publish for the first time GDP by expenditure approach and is assisting with rebasing the constant price GDP measures to a 2010 base year. Future plans include the development of a quarterly measure of GDP.

In 2009 PFTAC was asked to assess the FMIS system (as part of PFTAC’s regional review of FMIS implementation issues). Vanuatu has regularly sent officials to PFTAC-sponsored regional training events. No direct PFM interventions have been recorded since the April 2009 FMIS review.

In the macroeconomic area, PFTAC provided assistance to the Ministry of Finance and Economic Management (MFEM) in constructing a financial programming framework for Vanuatu and provided training in its use. This assistance included a number of missions that focused on improving the framework developed by MFEM, building together with MFEM and the Reserve Bank of Vanuatu (RBV) a small empirical-based inflation model that was later integrated into the framework, and holding a workshop to provide training in how to use the framework. In addition, staff members from MFEM and RBV participated in a regional financial programming workshop in Fiji held jointly by PFTAC and the Singapore Regional Training Institute using a Fiji case study specifically developed for this workshop.

1. A representative of the World Bank accompanied the IMF Article IV team on their visit to Vanuatu on April 2–10, 2013 and participated in discussions with the team and the Government of Vanuatu. The Bank and Fund country teams exchanged views on key macroeconomic prospects, fiscal policy priorities, and fiscal sustainability, and agreed to coordinate the two teams’ work over the period April 2013 to March 2014.

2. The teams agreed on the main macroeconomic issues for Vanuatu. These are the near and medium term growth outlook, appropriate fiscal and monetary policies over the near term, maintaining a sound fiscal course over the medium term, and addressing structural issues to sustain economic growth over the longer term.

3. Based on this shared assessment, the teams identified four areas as macro-critical, in view of their central role in achieving a sound macro-financial policy framework and sustained growth: (i) continuing efforts to strengthen the medium-term fiscal framework and explore options to generate more revenues to counter the decline in collections due to trade liberalization and to mobilize more funds to finance social and physical infrastructure, including through the introduction of income taxation; (ii) continuing efforts to safeguard financial stability by further strengthening financial supervision and regulation; (iii) improving basic infrastructure such as seaports, airports and urban amenities to support reduced costs and increased economic activity; and (iv) structural reforms to strengthen competition and improve business service delivery to bolster the underlying growth potential of the economy. Table 1 details the specific activities planned by the two country teams over the period April 2013 to March 2014, along with their expected deliveries.

4. The teams have the following requests for information and collaboration from their counterparts:

5. No disagreements among the two teams emerged on either the key issues, challenges, or on the division of tasks to tackle these. It was agreed that further details on collaboration, as necessary, will be agreed at the technical level as work progresses.

Relations with the Asian Development Bank

Asian Development Bank’s (AsDB) Country Partnership Strategy for 2010–2014 is aligned with the government’s poverty reduction strategy and aims to assist the government to address constraints in (i) transport—by providing support for improved connectivity to markets and social services; (ii) urban development—by improving access to sanitation and drainage facilities and improve urban infrastructure with a particular focus on Port Vila; and (iii) energy—by supporting greater energy efficiency, rural electrification, and renewable energy sources. Consistent with the government’s strategy of fostering private sector-led growth, AsDB also focuses on improving the enabling environment for the private sector through updating the legal and regulatory environment, better access to finance, and the reform and restructuring of state-owned enterprises (SOEs).

Subject to the annual country performance assessment exercise, AsDB envisions support from 2013 to 2014 of about $10.56 million in loans from the Asian Development Fund as well as $300,000 per annum in technical assistance (TA) grant support. To leverage AsDB’s impact and reduce borrowing costs, cofinancing opportunities will be pursued with other development partners.

Since joining AsDB in 1981, 11 loans have been provided to Vanuatu for a total amount of $67.07 million and 60 TA projects for $21.82 million. More than 50 percent of the loans were for infrastructure rehabilitation and more than 40 percent of the TAs were for institutional support and capacity building. ADB resumed its lending operations in Vanuatu with the approval of two projects in the last quarter of 2011. These were for the Vanuatu Interisland Shipping Project ($26.82 million), cofinanced by the New Zealand Government and Port Villa Urban Development Project ($39.16 million), cofinanced by the Australian Government.

Interisland Shipping Support Project. AsDB is cooperating closely with the government and New Zealand to implement a package of investments and technical assistance to improve interisland shipping services, capacity, and regulation. The main outcomes of the project includes (i) better access to markets and social services in the outer island target areas by 2014; (ii) stronger safety regulations and more compliance; and (iii) better shipping infrastructure. AsDB provides a loan of $10.82 million, the New Zealand government a parallel grant of $12.60 million, and the Vanuatu government $3.40 million. Implementation started in the beginning of 2013.

Port Vila Urban Development Project. AsDB’s support for urban development will contribute to social development by improving access to sustainable basic services in urban areas. AsDB, through a concessionary loan of $5.0 million equivalent and administering of the corresponding grant of $31.0 million equivalent from the Australian government, will provide assistance focused on urban planning and the provision of affordable, sustainable, and effective sanitation and drainage services to the residents of Port Vila and its surrounds, particularly to those living in informal settlements. Specific results targeted include (i) preparation of robust planning, legislative and policy documents for implementation in cooperation with the government, (ii) preparation of an integrated storm water drainage and sanitation master plan; (iii) institutional strengthening and capacity development; and (iv) provision of high priority drainage and sanitation infrastructure.

Energy Sector Initiatives. Overall access to energy is estimated at 33 percent and power generation is heavily dependent on diesel generation, which results in high power tariffs. RETA-7329 Promotion of Renewable Energy in the Pacific assessed alternative renewable energy options and concluded that hydropower is the least cost expansion option. The $11 million Energy Access Project (EAP), proposed for 2014, will support increased energy access to households and businesses in the provincial centers of Vanuatu thus contributing to inclusive economic growth. This will be achieved through expansion of existing distribution grids and the development of low-cost renewable energy generation from hydropower. In addition, ADB will support the transition to renewable energy through a pilot grid-connected solar project in Luganville and will assist consumers to use energy more efficiently under regional technical assistance.

Regional Cooperation Initiatives. Regional support will continue to be provided for renewable energy and energy efficiency, climate change, coastal and marine resources management, private sector development, management of civil aviation and information and communications technology. Under the Pacific Alliance for Sustainability, funded by the Global Environment Facility, AsDB is helping to build climate change adaptation capacity through regional TA aimed at strengthening management of coastal and marine resources. The regional TA for Statistical Capacity Building in the Asia and Pacific Region will continue. AsDB will continue to support Vanuatu’s participation in regional forums. AsDB will continue to work closely with the Pacific Islands Forum in a variety of areas, including on economic monitoring and formulation and implementation of economic policy.

AsDB has strengthened its assistance to Vanuatu through closer collaboration with the government and other development partners. An AsDB–World Bank joint Development Coordination Office was opened in June 2010 in Port Vila. The shared field presence is increasing AsDB’s responsiveness to the development needs of Vanuatu and supports aid coordination and aid effectiveness.

PFTAC in Suva, Fiji is a multi-donor technical assistance institution, financed by the IMF, AsDB, AusAID, NZODA, and, until 2001, by the UNDP, with the IMF as Executing Agency. The Centre’s aim is to build skills and institutional capacity for effective economic and financial management that can be sustained at the national level. Member countries are: Cook Islands, Federated States of Micronesia, Fiji, Kiribati, Marshall Islands, Nauru, Niue, Palau, Papua New Guinea, Samoa, Solomon Islands, Tokelau, Tonga, Tuvalu, and Vanuatu. 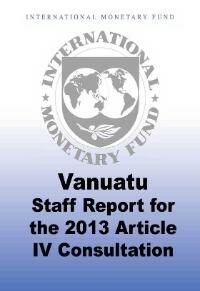 Vanuatu: 2013 Article IV Consultation
Author: Regional Office for the Asia and the Pacific