Panama’s extensive trade and financial linkages make it vulnerable to adverse external shocks, and this would have a sizable impact on Panama’s real activity. In the absence of monetary policy, macroprudential policy tools could usefully complement microprudential tools. A macroprudential supervisory body must possess the ability or power to collect and analyze firm-, market-, and global-level data to detect risks before they develop into full-blown crises. This study analyzes Panama’s tax structure, performance, and administration in order to identify priority areas for further strengthening

Panama’s extensive trade and financial linkages make it vulnerable to adverse external shocks, and this would have a sizable impact on Panama’s real activity. In the absence of monetary policy, macroprudential policy tools could usefully complement microprudential tools. A macroprudential supervisory body must possess the ability or power to collect and analyze firm-, market-, and global-level data to detect risks before they develop into full-blown crises. This study analyzes Panama’s tax structure, performance, and administration in order to identify priority areas for further strengthening

Spillovers to Panama: Impact of Trade and International Financial Shocks1

1. Panama is a small economy with a high degree of trade and financial openness. Trade and financial linkages have built up extensively due to Panama’s full dollarization, as well as the development of economic activity around the Panama canal and the Colón Free Zone (CFZ). Although Panama avoided a recession during the recent global crisis, real GDP growth slowed substantially from 10.1 percent in 2008 to 3.9 percent in 2009. The crisis period was characterized by a sudden withdrawal of international credit lines following the Lehman episode that transmitted rapidly into a freeze in domestic interbank lending, adversely affecting real activity. 2 This paper documents Panama’s main external economic linkages and provides a quantitative analysis of spillovers to Panama’s economy stemming from external trade and financial shocks.

2. While the U.S. remains Panama’s most important trade partner, the importance of China and Latin America has been growing. The U.S. accounts for about 20 percent of merchandise exports and for about a third of total canal traffic and CFZ re-exports (Figure 1). While business cycles in Panama and the U.S. have been historically highly correlated (Figure 3), China has become Panama’s second most important partner for merchandise trade in the past two years. Recently, with buoyant economic growth in Latin America and inroads in intraregional trade integration, Panama’s economic activity has become more sensitive to conditions in neighboring countries. For example, Colombia, Costa Rica, and Venezuela together accounted for 40 percent of CFZ re-exports in 2012, above the share of the U.S. Nevertheless, world trade remains an important driver of economic activity, through Panama canal transit and related logistics services (Figure 3).

3. Panama is an important regional financial center. Panama has a sizeable banking sector with total assets amounting to about 215 percent of GDP and domestic credit to the private sector amounting to about 90 percent of GDP (as of end-2011). Since mid-2010, the overall loan-to-deposit ratio has exceeded 100 percent, possibly reflecting an increased reliance on external financing, though lending to residents is more than covered by resident deposits (Figure 2), As of September 2012, foreign interbank deposits accounted for around 15 percent of total domestic deposits. Revocable international contingent credit lines amounted to about US$4 billion (about 7 percent of total deposits), with around half of these lines originating in North America (Figure 3). In contrast, foreign assets of Panama’s banking center, such as loans and other financial assets, are mostly concentrated in Latin America, reflecting a strong presence of other Central and South American banks in Panama.3

4. The impact of external spillovers on Panama’s economy is quantified using impulse responses from an SVAR model. Our VAR includes three domestic macroeconomic variables (real GDP, real domestic private credit, and the trade-balance-to-GDP ratio) and two external variables (global demand and global financial conditions). Global demand is proxied by (i) U.S. real GDP; (ii) a trade-weighted average of Panama’s main trading partners’ real GDP; and (iii) the world trade-to-world GDP ratio. Global financial conditions are measured by the Chicago Board Options Exchange Market Volatility Index (VIX). All variables are expressed in logarithms, except for the trade balance-to-GDP ratio and the VIX, which are expressed in levels. The model is estimated using quarterly data (seasonally adjusted, except for the VIX) for the period 1998Q1–2012Q1 with four lags.4 The data sources are primarily the IMF’s International Financial Statistics (IFS), World Economic Outlook (WEO), and Haver Analytics.

5. Structural external shocks are identified by a Cholesky decomposition. Due to the small size of Panama’s economy we assume that Panama’s variables don’t have an impact on global or U.S. variables, neither contemporaneously nor with a lag. Structural shocks to external variables are identified by a Cholesky decomposition: external variables are assumed to be contemporaneously exogenous to Panama’ economy and the global real variable reacts with a lag to innovations in global financial conditions.5

6. Following the methodology proposed by Bayoumi and Swiston (2008), we also identify the extent to which external shocks are amplified through the domestic credit channel. Macro-financial linkages are significant in Panama due to the size of the banking sector.6 The extent to which external shocks are amplified by the response of Panama’s real private credit is assessed by estimating a second set of VAR systems that include Panama’s real credit as an exogenous variable. In this specification, the estimated responses of domestic variables to external shocks do not include the indirect impact through the credit reaction to external shocks. The amplification effect through the credit channel can then be gauged by the difference between the responses in this model and in the original model, where all domestic variables are treated as endogenous.

7. Global demand and international financial shocks have a sizeable and lasting impact on Panama’s real activity as well as on real private sector credit. Figures 4 and 5 show impulse responses for Panama’s variables in two VAR specifications, in which external demand is proxied by different variables: the U.S. real GDP or a trade-weighted average of Panama’s top 5 trading partners ‘real GDP.7 As world trade is closely linked to Panama canal traffic (Figure 3) and canal-related activities, such as ports and the CFZ, we also analyze how Panama’s economy would be affected by a disruption to world trade. Impulse responses are generated in a standard fashion and reflect one standard deviation shocks. The following results are worth highlighting:

10. Panama’s extensive trade and financial linkages make it vulnerable to adverse external shocks. Trade linkages mainly operate through the high degree of trade openness, Panama canal traffic and related activities, such as ports, the CFZ, and logistics services. A negative shock to trading partners’ GDP would adversely affect real activity in Panama through lower external demand. A negative shock to world trade would result in lower canal traffic and therefore diminish demand for canal-related services.10 Financial linkages are dominated by FDI flows that finance a significant share of Panama’s large current account deficit, and the sizeable domestic banking sector. A sudden withdrawal of international credit lines due to worsening international conditions can be quickly transmitted into a freeze in the domestic interbank lending with adverse repercussions in the real sector.

11. Spillover analysis suggests that external trade and financial shocks would have a sizeable impact on Panama’s real activity, amplified by the domestic credit channel at the longer time horizons. The SVAR analysis suggests that Panama’s real GDP would decrease by about 0.4 to 0.8 percent within the first year after an adverse external demand shock. Although real domestic credit responds with a lag to negative shocks (including the VIX shock), the response is stronger than in the case of real GDP, leading to an amplification of Panama’s output response.

12. Preventive policy actions could increase Panama’s resilience against adverse external shocks. Strong domestic fundamentals and a healthy banking system with solid liquidity and capital buffers would help mitigate the negative impact of external demand and financial shocks on Panama’s economy. In the absence of independent monetary policy, fiscal prudence and discipline become imperative for allowing a countercyclical fiscal policy response in order to dampen spillovers on domestic activity in the aftermath of a large external shock. Strong financial supervision, as well as the development of financial safety nets, would help limit negative repercussions on the domestic banking sector and their effects on real activity.

Of the 49 onshore banks, only 21 are Panamanian (38 percent of banking sector assets). Another 31 percent of assets are held by other Central and South American banks.

Standard unit root tests (augmented Dickey-Fuller) show that all the variables are stationary in first differences, except for the trade-balance-to-GDP ratio and the VIX that are stationary in levels. In addition, standard co-integration test (Johansen Trace) suggests that one co-integrating relationship is evident among I(1) variables. It is adequate to estimate the model in levels, thereby avoiding a potential misspecification of the co-integration rank. While most conventional tests (Akaike Info and Schwarz Criteria) suggested including nine lags, four lags were chosen given the sample length and as a natural choice for quarterly data.

Most recently, Adler and Sosa (2012) applied a similar methodology to quantify spillover effects from Brazil in South America.

Panama’s top 5 trading partners are identified in each year from 1996 to 2011 based on their annual shares in Panama’s overall exports and imports. As countries’ shares in Panama’s overall trade tend be volatile, the list of the top 5 trading partners in each year includes in total 10 countries. Using quarterly trade shares (calculated as a moving average over the last eight quarters) of these 10 countries and their quarterly real GDP (seasonally adjusted, expressed in billions of 2005 U.S. dollars), we compute a trade-weighted geometric average of top 5 trading partners’ GDP in the period from 1996:Q1 to 2012:Q2.

Due to space constraints, impulse responses to a shock to the ratio of world trade to world GDP are not reported here, but can be provided upon request.

Historically, canal revenues have been fairly stable as the Canal authority has been adjusting fees when traffic declined. See Panama – Staff Report for the 2012 Article IV Consultation (http://www.imf.org/external/country/PAN/index.htm).

Panama: Dynamic Responses of Domestic Variables to External Shocks 1/ In the Scenario with the U.S. GDP 1/

(at the 4th quarter horizion) 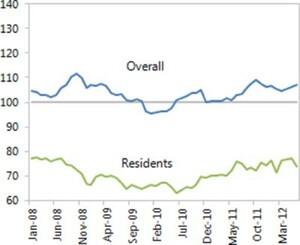 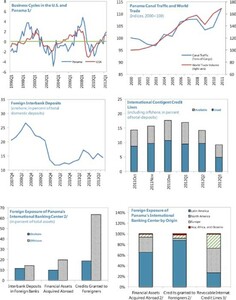 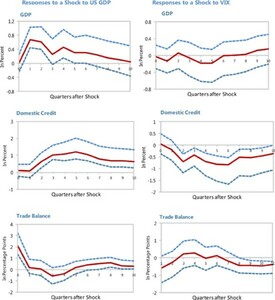 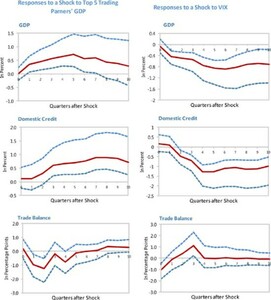 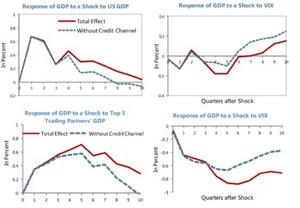 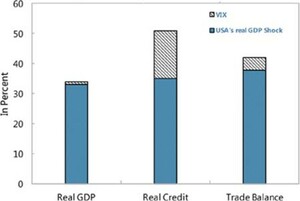