I. Potential Growth and the Output Gap in Latvia1

This note presents estimates of potential growth and the output gap in Latvia from different methods. The estimates suggest that output was below potential in the early 2000s but the output gap became positive and large after EU accession. The extent of overheating in the pre-crisis boom is particularly uncertain but staff believes output was about 5–10 percent above potential before the crisis. The output gap became negative and large during the crisis, reaching about -13 percent of potential output in 2009. With unemployment still well above its natural level, the output gap is estimated to be negative at slightly below 2½ percent of potential output in 2012, but is expected to narrow gradually and be closed in the next 3–4 years. Potential growth is nevertheless expected to be substantially lower than in 2002–07 unless structural reforms enable to reduce faster and further the structural level of unemployment and remove bottlenecks that would allow attracting more investment in the coming years.

1. The concepts of potential output and its associated output gap are central to many macroeconomic policy discussions. In the near term, the level of potential output indicates the capacity of the economy to expand without leading to inflationary pressures. Over the medium term, it determines the sustainable pace of noninflationary output growth. Moreover, potential output is a crucial input to assess a variety of macroeconomic outcomes, such as the stance of fiscal policy or the sustainability of the external balance. For example, assessing whether Latvia fulfills the commitments under the ‘Fiscal Compact’ will depend on an estimate of the fiscal position net of cyclical effects and hence on the output gap estimate.

2. However, potential output is an unobservable latent variable and its empirical counterpart needs to be estimated. Many different methodologies have been used to estimate potential output, each of them encompassing a different precise definition of potential output and entailing advantages and disadvantages. No specific approach can be taken to be “the” correct one and potential output estimates are subject to substantial uncertainty. This uncertainty is probably even larger for countries like Latvia, a transition economy still going through substantial structural changes and coming out of a severe crisis that has likely rendered obsolete a significant part of the economy’s productive capacity. This note presents estimates from various methods, argues in favor of estimates from a variant of the production function approach and uses these estimates to discuss briefly the room for policies to enhance potential growth going forward.

3. Analysts have relied on different methods to estimate potential output. Most methods can be broadly classified in two groups: univariate statistical procedures and methods based on economic multivariate models.

4. The benchmark model used in this note is a variant of the production function approach. It implies assuming an aggregate production for the economy and comparing the actual level of input factors with their ‘potential’ or cyclically-adjusted level. The building block is a Solow growth model that relies on two factors that drive growth in the supply side of the economy: labor and physical capital. The emphasis on a production function approach reflects both staff view that it represents an adequate framework for Latvia (where, for instance, population dynamics and structural unemployment play an important role in potential labor and potential output estimates) and convenience in terms of comparability, since it is the method also used by the Latvian authorities and the European Commission.

5. Estimates suggest that output was below potential in the early 2000s. Estimates from the PF approach suggest that output was 2½ percent below potential in 2002–03, consistent with high unemployment and a NAIRU estimate implying an unemployment gap of around 1–3 percentage points (Figures 1 and 3). The estimate from the HP filter is about the same, while output gap estimates from the BK and CF filters are negative but much smaller (Figure 2, left chart).

6. The output gap became positive and large after EU accession in 2004. Both filters and the PF methods suggest that output increased well above potential from about the time of EU accession (Figures 2 and 3). The estimate from the benchmark PF approach, that incorporates information from the goods and labor markets through the NAIRU estimate, indicate that the widening of the output gap accelerated in 2006, consistent with price and wage inflation developments (Figure 3).

7. Output was probably about 5–10 percent above potential before the crisis, although the extent of overheating at the pre-crisis boom is particularly uncertain:

8. The investment boom financed by capital inflows was the main driver of potential growth before the crisis. Growth decomposition from the benchmark PF approach shows that in the early 2000s and especially after EU accession, potential output growth was driven mainly by a foreign financed investment boom. Productivity growth also played an important role, although this might partially reflect underestimated rise in factors’ utilization.

9. All methods suggest that output fell well below potential in 2009–10. The benchmark PF model suggests the output gap reached -13 percent in 2009. Estimates from filters range from -8 to -10½ percent. All methods have the output gap narrowing from 2010 or 2011, except for the BQ model that shows a larger output gap in 2012 than in 2011 (although quarterly gap estimates from the BQ model are decreasing towards end-2012).

10. The labor force and productivity were the main factors dragging potential growth during the crisis. The sharp contraction in potential TFP in 2008–10 contributed significantly to the contraction in potential growth during the crisis. This is consistent with efficiency losses in reallocating factors across sectors—although the drop in TFP might be capturing underestimation of changes in capacity utilization. Emigration flows that intensified at the onset of the crisis affected potential employment and growth in 2007–08. The negative impact of labor to potential growth in 2011–12 responds to an increase in structural unemployment most likely due to “hysteresis”—a transformation of cyclical into structural unemployment as skills of the long-term unemployed depreciate.

12. The estimated unemployment and output gap is still significantly negative but is projected to close in the next 3 to 4 years.

13. Going forward, staff expects potential growth to be substantially lower than before the crisis. Staff expects a gradual recovery of investment as FDI inflows pick up, but at a much slower pace than in the pre-crisis years when capital flows to the region were extraordinary. A slower pace of capital accumulation would also be associated with a more modest growth in productivity. Labor is not expected to contribute to potential growth in the coming years. The natural unemployment rate is expected to decrease gradually from its current estimate at 12.3 percent to 10¾ percent by 2015 and to slightly below 10 percent by 2017. But the gradual reduction in the natural unemployment rate barely offsets the expected negative trend in working age population. Altogether, staff projects potential growth to increase to about 3¾ percent in 2014–17.

14. Staff projections suggest that policies increasing potential employment could help attaining higher potential growth in the coming years. Given current projections for population and structural unemployment, the contribution of the labor factor to potential growth would be almost nil in 2014–17. Two sets of policies could increase the contribution from labor to growth. First, policies aimed at reducing the natural unemployment rate by addressing structural bottlenecks that are keeping long-term unemployment at high levels could provide a boost to potential output. In this sense, findings from the forthcoming World Bank study could be used to: i) design ALMPs that aimed at alleviating skill mismatches in the labor market; and ii) address current disincentives from tax and benefit systems that act as an unemployment trap, reducing the attractiveness of moving from unemployment to employment. In addition, in an effort to reduce net emigration, the authorities are developing plans aimed at assisting emigrants who wish to return. Other demographic policy efforts could help in the longer term (Staff Report, Appendix II).

15. Attaining higher potential growth will depend on fostering productivity and attracting more foreign investment over the medium term. The growth rate of investment observed during the boom years is not likely to return. Still, stronger investment than currently projected and faster productivity gains could be achieved if structural reforms to address bottlenecks were adopted (see next chapter).

We estimate a joint model of quarterly real GDP and unemployment and use a Blanchard and Quah (1989)-type decomposition, relying on long-run economic restrictions, to identify supply and demand shocks. The output gap is computed as the accumulation of demand shocks (to anchor the level of the output gap we assume the 2004 gap is equal to the PF method’s gap estimate). We use quarterly data since 1996 and four lags as suggested by lag length selection criteria.

The PF variant used here bears similarities with the one used by the U.S. Congress and Budget Office as described in CBO (2001)

Also, the estimate from using a constant-NAIRU model is almost 12 percent.

Hours worked was not used in this specifications due to data concerns.

An alternative specification using headline inflation and other supply shock control variables (e.g. changes in energy and food prices) was also used and the results were not significantly different.

For the purpose of this analysis, labor statistics up to 2011 have been estimated by staff by extrapolating the correction introduced in 2011 due to Census data for the period in between census years (2000–11).

This approach is similar to the one used by the Congress and Budget Office to estimate potential output in the U.S.; see CBO (2001).

For example, a new method being used by the European Commission to estimate trend TFP relies on the Kalman filter and data on capacity utilization to disentangle cyclical and structural variations in TFP; see D’Auria et al. (2010).

Some of the Doing Business subindicators seem more reliable than others. Latvia’s ranking for “getting credit” (4th out of 185) seems too favorable given the extent of deleveraging. And a caveat to Latvia’s unfavorable ranking on “protecting investors” is that Finland has the same ranking (70th out of 185) on this subindicator—which is hard to square with other indicators for Finland showing a particularly strong business environment.

However, the NAP proposals on regional development—while consistent with earlier long-range planning documents—are now proving controversial. The NAP envisages focusing resources on 9 larger cities and 21 development centers: the trade-off is that smaller municipalities would miss out, but resources would no longer be spread too thinly to be effective.

For a more complete overview of program issues from the IMF perspective, please see the upcoming Ex-Post Evaluation of Exceptional Access Under the 2008 Stand-By Arrangement. For the European Commission’s perspective, see Giudice et al (2012).

See for example, IMF Country Report No. 12/171, the staff report for the 2010 Article IV Consultation.

For further information see Erbenova et al. (2011). The IMF’s Legal Department provided technical assistance to the MoJ in the design of amendments to the insolvency framework.

Under section 57(2) of the Law on Insolvency, a legal person is liable to insolvency proceedings if its unpaid debt exceeds LVL 3,000, and if three weeks after a warning from its creditor, “has not paid its debt or raised justified objections to the claim.”

The Law does not provide for an appeal against a court decision to launch insolvency proceedings and appoint an administrator. UNCITRAL (2005) recommends allowing the debtor a right to appeal, though without an appeal granting suspensive effect (so as to deter frivolous appeals).

See the Staff Report for the Fifth Review Under the Stand-By Arrangement (IMF Country Report No. 12/31), Box 1.

Chapman and Tulip (2008) provide a concise overview of international experience with income-contingent student loans (ICL) and other forms of financing tuition. They caution that the effectiveness of ICL depends on the effectiveness of a country’s income tax system to track graduate incomes and collect debts.

This is a main finding of the Latvian Competitiveness Report 2011.

Currently each vocational education student receives a state stipend of 7 lats per month and can apply for an additional ESF stipend of 10 to 50 lats per month. This would be in force until the end of 2015.

(in percent of potential output)

Contribution to Growth of Potential Output

Tax System Does not Encourage Employment 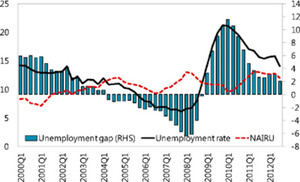 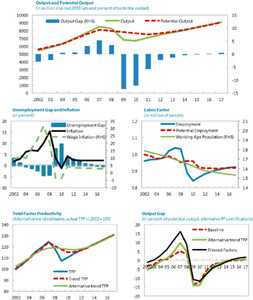 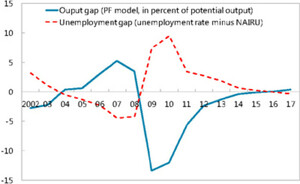 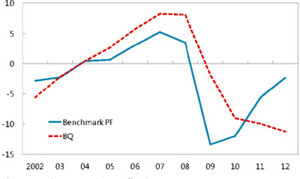 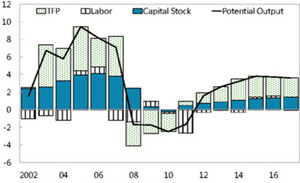 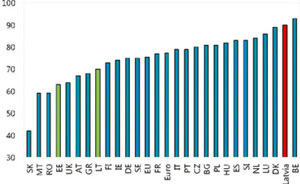 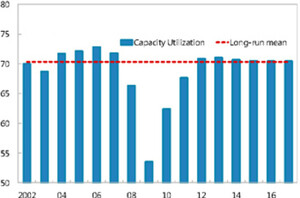