Denmark’s external competitiveness has been weakening vis-à-vis other EU countries. Labor productivity growth has been slow but wages are increasing, resulting in higher unit labor costs. The price level in Denmark is one of the highest in Europe. With an exchange rate peg to the euro, high prices likely aggravate the erosion of external competitiveness. Better aligning wages in line with labor productivity could help regain competitiveness in Denmark. Increasing foreign competition could also lower production costs and the mark-ups by Danish firms, resulting in a lower price levels.

A. Export Performance and Labor Productivity

1. Denmark’s external competitiveness has been deteriorating over the past two decades. Though current account balance remains in surplus due to strong net income, Danish export market share has been declining since the 1990s (Figures 1 and 2). In main export categories such as food and beverages, export volumes have been sluggish. Unit labor costs have picked up since 2005, also indicating a loss of competitiveness.

2. The level of structural indexes in Denmark compares well to the OECD average (Figure 4). Most of the product market and competition indicators are about the average level. In particular, the start-up administrative cost in Denmark is significantly lower than OECD average. Denmark’s labor market is relatively flexible. Trade union density is three times as high as the OECD average, although this is similar to other Nordic countries such as Sweden and Norway.

4. Loss of competitiveness is pronounced in some non-tradable sectors. Decomposition of unit labor costs shows that wage increases are more or less similar across the sectors but productivity differences are large, contributing to a rise in unit labor cost in some of the sectors. For example, the construction sector saw the largest increase in measured unit labor cost, but this was mainly due to a decline in labor productivity rather than wage growth.

5. Low productivity growth in Denmark has been linked to a fall in total factor productivity (TFP) growth. Although there have also been a decline in capital deepening and labor quality, the past studies find that overall productivity growth relative to other European countries is mainly due to reduced TFP growth (Pedersen, 2011; IMF, 2010). The Danish Economic Council (2010) also found that misallocation of resources and insufficient competition especially in the service sector is the main reason for a decline in TFP growth. They also suggest the improvement in the quality of public spending specially in the area of education and health to increase labor productivity (SIP, Chapter 1).

B. What Explains Cross-Country Price Differentials?

6. The price level in Denmark is the highest among the EU countries, reflecting relatively the high prices of the non-tradable or service sector while those in the tradable sector tend to be equalized across countries with a free flow of trade of goods. For simplicity, if we characterize goods production (i.e., tradables) as capital intensive and service (i.e., non-tradables) production as labor intensive, then the price of services would be cheaper where labor costs are low.

7. Price differentials across countries can be explained by different costs of production and price mark-ups. Following the pricing behavior model proposed by Batini and others (2005), we estimate the price equation as a function of labor adjustment costs, the cost of imported inputs, and the markup of prices on marginal cost for the panel of EU-27 for the period of 2000–12. The dependent variable is the gross value added price deflator (GVAD).2 The independent variables are the output gap (the deviation from the H-P filtered potential output), real marginal cost (i.e., share of labor cost, real price of oil and real price of imports) and the factors that affects mark-up (the extent of external competition).3

8. In addition to the labor cost share, we include the wage structure variable (i.e., the dispersion of wages among workers) to account for price differentials. The past studies find that the wage dispersion plays a significant role in determining the country’s price level (Lipsey and Swedenberg, 1999). For example, even if we compare two countries in which labor prices are the same relative to capital input prices, the structure of service prices can be different when one pursues a policy of equalizing wages among workers while the other allows large differences according to the skill level. If the elasticity of substitution between skilled and unskilled is small, the country with egalitarian wage policy should face relatively high prices for unskilled services and low prices for skill-intensive services.

9. The main results from the regressions are s follows (Table 1)4:

C. What Can Denmark Do to Improve Competitiveness?

10. With peg to the euro, it is important for Denmark to keep the price level in check. Given that the price level is explained largely by labor costs, wages should be aligned with productivity growth to remain competitive.

11. The regression analysis suggests that the high price level in Denmark is driven by higher labor costs, high material input price, and low foreign competition. Higher material input prices are partly driven by the consolidation of the supplier segment in Danish construction sector (McKinsey & Co, 2010). The use of different construction and material standards also limits the possibility to source materials from other countries, resulting in higher prices of input prices.

For empirical analysis, we use the aggregate price level rather than the price of services due to paucity of the appropriate data.

We measure the weakness/strength of foreign competition for country i as the log of the ratio of an index of export prices of EU countries excluding country i to the country’s price level, GVADi. Labor share is given by SL=WN/PY, where W is labor cost per employee, N is employment, P is the GDP deflator at factor cost, and Y is national income. SL is net of indirect taxes. Finally, wage dispersion is defined as the ratio of the median wage and the lowest-paid workers’ wage from OECD Employment Outlook.

The output gap reflects cyclical factors that affect the price level. Output gap shows a negative (though not statistically significant) coefficient, indicating a degree of counter-cyclicality in the equilibrium markup: when the economy is booming, firms are more likely to cut the price level to get a larger market share.

Denmark and Germany: Comparison of Labor and Product Market Constraints, 2008 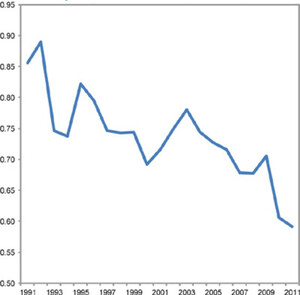 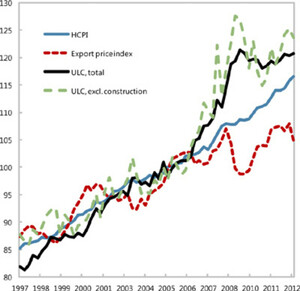 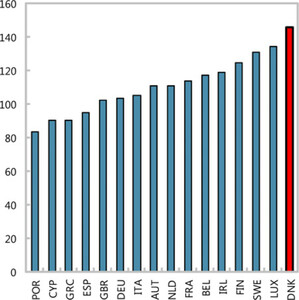 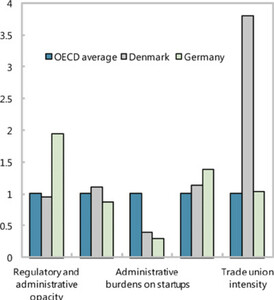 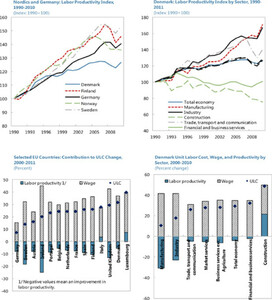