The Selected Issues paper on the Russian Federation discusses the economic growth and future growth potential of the country. After almost a decade of impressive growth performance, Russia suffered a sharp contraction in 2009 with GDP falling by 8 percent. This paper gives an overview of the conceptual issues regarding potential growth and the analytical framework based on an exogenous growth model; growth accounting results for Russia in the past decade; and importance of structural reforms to achieve sustained high growth.

The Selected Issues paper on the Russian Federation discusses the economic growth and future growth potential of the country. After almost a decade of impressive growth performance, Russia suffered a sharp contraction in 2009 with GDP falling by 8 percent. This paper gives an overview of the conceptual issues regarding potential growth and the analytical framework based on an exogenous growth model; growth accounting results for Russia in the past decade; and importance of structural reforms to achieve sustained high growth.

1. As discussed in Strengthening Russia’s Fiscal Framework, Russia already has in place many elements of a budget framework that can help Russia to face future challenges. Unfortunately however, due in part to the crisis, but even before the crisis, this framework has not been implemented in a steadfast way.

2. For oil producing countries such as Russia, the key challenges are to delink the economy from oil price volatility, ensure that the oil wealth is enjoyed equally by all generations (i.e., intergenerational equity), and promote balanced and diversified economic growth. Best practice suggests this would require:

3. Staff has endorsed the long-term nonoil deficit target of 4.7 percent of GDP specified in the budget code as an appropriate anchor for fiscal policy in Russia and see the multi-year budget approach as in line with best policy. Also, there are two oil funds, a “rainy day” fund—the Reserve Fund—to help smooth out the effects of large swings in oil prices and the National Wealth Fund to save part of the oil wealth for future generations.

4. Recently however, Russia has been moving away from these positive elements. Fiscal policy has focused excessively on the overall balance, rather than on the nonoil balance, leading to procyclical policies (with the exception of 2009). When the crisis hit, the Reserve Fund was drawn down to finance the budget deficits in 2009 and 2010, as it was intended to do. But as a result, there is now a much smaller buffer left to cushion any sudden drop in oil prices—which is not an unlikely event in the current uncertain global environment—and Russia could be forced to rely on market financing at unfavorable rates (or to cut spending). Last, the medium-term anchor for fiscal policy was suspended during the crisis and the Ministry of Finance has presented a proposal to the government to institute an oil-price rule starting with the 2013 budget. The rule proposed would include a ceiling on expenditures (total revenue at the “base” oil price, plus all nonoil revenues, plus a net borrowing limit of 1 percent of GDP), and oil revenues above the “base” oil price would be saved in the Reserve Fund until it reaches 7 percent of GDP—once the Reserve Fund reaches this threshold, at least half of excess oil revenues should go to the National Wealth Fund, while the remaining resources would be channeled to the budget to finance infrastructure and other priority projects. If oil prices are below the “base” oil price, the Reserve Fund would be used to finance the resulting budget deficit. Starting in 2013, the rule will use a 5-year backward-looking average of oil prices as the base, which will gradually increase to a 10-year average by 2018.

5. There are several broad approaches to long-term management of oil wealth. The desirability of any approach depends on the country’s specific circumstances, and the role of country institutions. In the case of Russia, looming demographic challenges imply significant fiscal risks—stemming from potentially sizeable future pension and healthcare expenditures due to expected increases in population aging and longevity—and hence, there is a need to preserve a share of today’s oil wealth to ensure future generations can also benefit, particularly once oil reserves have been depleted.2 Calls on contingent liabilities, both explicit and implicit, can also have major fiscal costs (Box 1). Best practice calls for a periodic reassessment of the long-term target implied by any rule, based on oil-price stress tests and developments in the oil markets, oil price futures, and probable reserve estimates. In the short run, fiscal policy may need to deviate from the long-term anchor for stabilization purposes, implying that it could be more desirable to have a higher (lower) overall deficit than indicated by the nonoil balance target during a cyclical downturn (upturn). However, such a policy can be difficult to reverse in practice (i.e., a “deficit bias” problem, meaning countercyclical policies implemented during a downturn are not reversed during an upturn), and to avoid this the government should have a clear and credible plan on how to return to a sustainable fiscal position over the medium term.

6. The advantages of a nonoil deficit target are that it: (i) focuses on a measure of fiscal policy that excludes oil revenues to give a better picture of the true fiscal stance; (ii) delinks the economy from short-term oil price volatility; (iii) over time reduces fiscal risks while ensuring intergenerational equity; and (iv) encompasses both changes in oil prices and volumes. The drawbacks are that (i) the rule may be difficult to communicate and (ii) the appropriate level of the nonoil deficit needs to be reassessed periodically (see Table 1).

7. An oil-price rule, appropriately designed, may be a useful alternative for Russia. If supplemented by a ceiling on borrowing or expenditure, it can ensure fiscal sustainability. However, it in principle ignores exhaustibility issues and changes in resource production and fiscal regimes so would need to set the oil price in a way to explicitly address these issues. The advantages of the oil-price rule are that it: (i) can delink the economy from oil price volatility and (ii) may be easy to communicate (or allow for more focused communication).

The drawbacks are that (i) extra constraints are needed to ensure both fiscal sustainability and intergenerational equity, which could make the rule harder to communicate, and (ii) the rule only reacts to changes in oil prices, not oil volumes (see Table 1).

Research by IMF staff (see Contingent Liabilities: Issues and Practice) suggests that in terms of incidence, the most widespread form of contingent liabilities is guarantees, particularly loan guarantees, which exist in virtually all countries. In terms of the overall impact, however, implicit liabilities are the most serious, especially financial system bailouts.

In Russia, fiscal risks are not systematically identified and disclosed nor systematically incorporated into fiscal analysis and the budget process. To date, events such as the failure of the Bank of Moscow in summer 2011 and the subsequent $14.2 billion recapitalization operation paid for through the state deposit insurance corporation (DIA) have not entailed a cost to the state budget. However, they clearly illustrate the need for Russia to put in place structures to identify, disclose, and manage fiscal risks. Other research suggests that including the debt of quasi-sovereigns (e.g. companies and banks of which the government is a shareholder) would increase Russia’s public-debt-to-GDP ratio by an extra 10 percentage points by 2020.

8. With respect to the flexibility of the rules to a structural (or fundamental) break in oil price dynamics, the nonoil deficit target could be more effective in delinking the budget from oil price cycles. If the benchmark oil price is linked to past oil prices (e.g., a moving average) as currently considered, the fiscal stance implied by the rule would only reflect a permanent shift in oil prices with a lag. For example, if oil prices are expected to converge to a lower level of long-run prices compared to current prices, the fiscal stance implied by an oil price rule would be expansionary until the moving average fully captured the shift to lower prices. For this reason, some countries (e.g., Mexico) use an oil price rule that incorporates both past and future oil prices. In contrast, the nonoil deficit rule relies on the present value of oil wealth and thus is forward-looking by design if the rule is reassessed periodically in line with best practice.

9. Staff’s assessment is that the currently-suspended nonoil deficit target of 4.7 percent remains an appropriate anchor for Russia. Based on assumptions from the April 2012 WEO, a Permanent Oil Income Model using a real criterion rule (i.e., one where the government provides a constant stream of services in real terms) would be consistent with a nonoil deficit of about 6 percent of GDP by 2015, allowing for greater consumption of oil wealth up front, but would mean a lower level of consumption of the oil wealth in the outer years (see text chart).3 Stress testing suggests that the appropriate range for the nonoil deficit by 2015 would be between 4 and 8 percent of GDP—as such, 4.7 percent of GDP appears to be appropriately conservative and would allow the Reserve Fund to be gradually rebuilt out of the resulting overall surpluses (see Table 2 and text chart). Staff’s estimates suggest that the rule currently under consideration by the ministry of finance would lead to a nonoil deficit that would be higher than under a POIM-real rule through 2020 and would not generate sufficient surpluses to rebuild the Reserve Fund in a meaningful way (see text chart).

10. To be credible and lasting in an uncertain environment, fiscal anchors and associated targets need to be flexible. As noted in Fiscal Frameworks for Resource Rich Developing Countries, there is a tension between rigid fiscal rules that have a high risk of becoming obsolete and allowing too much discretion to undermine credibility. To reduce this tension, the following practices can be considered:

11. Ultimately, the main lesson to be drawn from international experience is that the specific form of any rule to guide the formulation of fiscal policy frameworks is less important than consistent implementation of the rule. In this regard, while staff see Russia’s current budget framework as good with no real need to change it, whatever fiscal rule Russia decides to choose, the key to success will be to apply it as steadfastly as possible.

12. In terms of how to reduce the nonoil deficit to a level consistent with intergenerational equity, simulations using the IMF’s Global Integrated Monetary and Fiscal (GIMF) Model may be instructive.4 The current 2012–14 medium term budget would leave the nonoil deficit at about 9 percent of GDP by 2014, nearly double the level of 4.7 percent of GDP that staff considers appropriate. If instead the authorities were to reduce the nonoil deficit gradually to 4.7 percent of GDP by 2015 (i.e., adjustment of about 1.5 percent per year, starting this year) using growth-friendly instruments, in this case, reductions in government consumption and transfers, while there would be a short-term drag on growth, there could be a positive effect on growth in the medium term.

13. Potential measures to achieve the needed fiscal savings of 5.3 percent of GDP include:

Staff estimates suggest that the old-age dependency ratio (the ratio of the population age 65 and older to the working age population) is projected to nearly double from around 18 percent to 36 percent between 2010 and 2050, about the same pace as in advanced economies.

A standard POIM rule, which implies a stable nonoil deficit on average over time, is also shown for completeness. Such a rule would imply a very large consolidation in the medium-term but would allow a higher level of consumption of oil wealth in the outer years (i.e. after oil runs out) than under the POIM-real criterion rule.

See “Is Russia’s 2011–13 Budget Growth-Friendly” in Russian Federation: 2011 Selected Issues Paper for details of the GIMF model and how it has been applied in the Russian context.

Impact of credibility on reform scenario 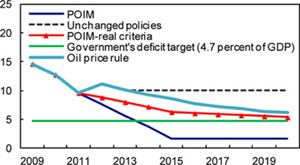 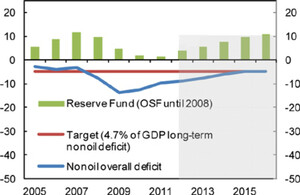 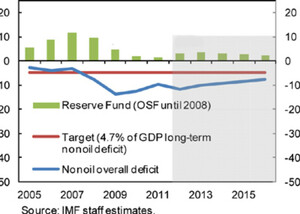 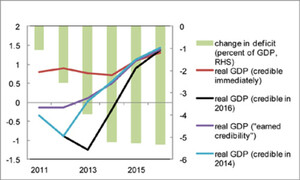