1. Policy interest rates are expected to anchor money market rates and Treasury bill/bond (T-bill) yields that act as benchmarks for deposit and loan rates. In the Philippines, interbank money market and Treasury bond yields have at times fallen below the policy rate due to the limited amount of government securities held by the BSP for repo operations and inability of the BSP to issue its own securities to mop up excess liquidity. When interbank and T-bill rates are below policy rates, the impact of policy rates on lending rates could be blunted because the former often acts as a benchmark for lending rates. Therefore, this paper evaluates the role of policy rates as well as lending conditions (proxied by the spread between the T-bill and policy rate) when assessing monetary conditions.

2. To assess the impact of policy interest rates and lending conditions on the output gap, the paper estimates an extended Global Projection Model using Bayesian techniques. 2 A GPM model that incorporates commodity prices, lending conditions, and headline and core inflation can provide a systematic framework to consider policy trade-offs under an inflation forecast targeting (IFT) regime like the Philippines (see Laxton and others, 2009).

3. The paper is structured as follows: Section II looks at the empirical interest rate transmission mechanism and macro-financial linkages. Section III estimates an extended GPM model for the Philippines incorporating global commodity prices and lending conditions to assess their impact on the real economy and usefulness for forecasting inflation. Section IV concludes with some policy implications.

6. The interest rate and credit channels are two of the key transmission mechanisms of monetary policy in emerging markets. 3 In theory, money market and T-bill yields should be a premium over overnight policy rates (Reverse Repurchase Rate, RRP) reflecting term, liquidity and credit (counterparty) risk factors. In the Philippines, as of December 2011, benchmark interbank money market (PHIBOR) and T-bill yields (91-day and 1-year) are significantly below the RRP rate (Figure II.1 The concern here is that lower market rates could translate to retail bank rates (on deposits and loans) that are below levels consistent with the central bank’s policy stance and thus inflation objective. 4 In particular, real lending rates in the Philippines are significantly below their historical levels and credit growth to the private sector has risen sharply (to 22 percent by November 2011, Figure II.2). Historically in Asia, low interest rates and credit booms have been characterized by a high incidence of economic crises.5

7. The deviation of T-bill yields from policy rates has been more persistent and volatile than deviations of money market rates. The estimates of a GARCH (1,1) framework from 2000-11 find the long run mean of the interbank (IB) money market rate is 0.56 percentage points above the policy rate while the average T-bill (TB) yield is 0.37 percentage points below (Table II.1). 6 Deviations of market rates tend to persist over time in terms of level and volatility, suggesting that influence of the policy rate over the yield curve is limited, particularly in the case of treasury securities. 7

8. The persistence of the negative spread between T-bill and policy rates weakens the interest rate and credit channels of monetary policy. A simple recursive Vector Autoregression (VAR) analysis of the interest rate transmission mechanism controlling for external factors (10-year treasury bond rates) shows that the treasury bill rate has a larger (nearly double the magnitude) and more statistically significant impact on lending rates than policy rates (Figure II.3).8 Therefore, the impaired influence of policy rates on T-bill rates is costly in terms of weakening the effectiveness of monetary policy transmission to lending rates (or the credit channel of monetary policy).9 The impact of interbank rates on retail bank rates is less significant than T-bill rates and more comparable to the role of the policy rate.10 Guinigundo (2010) also noted that the pass-through from the policy rate to the T-bill rate is quite limited in the Philippines, particularly under the inflation targeting regime.

9. Structural factors and changing patterns of demand and supply conditions for treasury securities could explain the spread between T-bill rates and policy rates. In particular:

10. The spread is determined by portfolio inflows, liquidity and supply of government securities (Figure II.4). Both the impulse responses and variance decompositions of a simple recursive VAR confirm the significant influence of foreign portfolio inflows and liquidity on the spread.14 The supply of T-bills at primary auctions also has an impact, albeit to a lesser extent. On the other hand, the role of cut-offs by the Department of Treasury at primary auctions was difficult to quantify and not accounted for in the analysis.

11. The spread between the T-bill and policy rate is closely associated with credit growth and thus appears to be a good proxy for lending conditions. The strong influence of T-bill rates on lending rates indicates that the spread could affect lending conditions and private credit growth through a marginal cost of finance channel. In fact, the spread appears to lead private credit growth over the last decade, particularly when it is persistent (Figure II.5). Previous empirical analyses have suggested that private credit has a significant impact on domestic demand in the Philippines due to the importance of banks as a source of financing for the large corporate sector and, more recently, consumer credit (IMF, 2011; and Guinigundo, 2010).

12. The monetary policy analysis is conducted by extending to better capture the role of global commodity prices and lending conditions the GPM model of Berg, Karam, and Laxton (2006). Global commodity prices and lending conditions are incorporated similar to Carabenciov and others (2008). The model is estimated using Bayesian techniques based on prior distributions for the parameters from cross-country work and assumptions about the Philippine economy. Details of the GPM model specification and results are described in IMF (2011). The results of the extended GPM model highlighting the impact of lending conditions (proxied by the spread between the T-bill rate and policy rate, in basis points) on the aggregate demand or output gap equation and the degree of second-round effects of headline inflation on core inflation are discussed below.

15. The weak interest rate transmission suggests a need to take into account lending conditions when evaluating the monetary stance. The persistence and volatility of the negative spread between the T-bill and policy rate lessens the strength of the interest rate and credit channel of monetary policy because the T-bill rate has a stronger influence than the policy rate on deposit and lending rates. The negative spread (a measure of lending conditions) affects the real economy. In this context, monetary conditions as of December 2011 are more supportive of growth than implied by the policy rate alone. Lending conditions should be taken into account when evaluating the monetary stance and inflation forecast, particularly capital inflows and the associated foreign exchange intervention and liquidity injections. Coordination of monetary and fiscal policies also has a role to play in strengthening monetary policy effectiveness. The high degree of second-round effects of headline inflation on core inflation suggests a need to take account of the impact of volatile commodity prices when evaluating the inflation forecast and the monetary stance.

See Mishkin (1996) for a more comprehensive view of the channels of monetary transmission and Guinigundo (2008) for their importance in the Philippines.

For simplicity, this paper associates the deposit rate with the interest rate channel and lending rate with the credit channel of monetary policy as in most dynamic stochastic general equilibrium models with a banking sector.

See Chapter 3, Regional Economic Outlook: Asia and Pacific, October 2011 for the historical relationship between rapid credit growth and economic crises in Asia including the role of interest rates in driving the credit cycle.

Following Panigirtzoglou and others, 2000, the divergence (d): market interest rate - policy rates is modeled as: with the long run mean of divergence = −α1/α2; the speed of reversion = −α2; and the variance = β2 + β3, where the variance is explosive if the value is greater than one.

Fermo (BSP, 2009) also recognized this deviation, saying, “there appears to be some divergence between the two rates, as the global financial crisis has weakened to a certain extent the traditional transmission mechanism of the interest rate channel to the real economy.”.

The impact on deposit rates shows a similar pattern but this paper focuses solely on the transmission to lending rates given the greater importance of the credit channel of monetary policy in the Philippines (see IMF, 2011).

Thus, the following sections focus exclusively on the spread between the T-bill rate and policy rate.

Although the BSP has the legal authority to issue its own bills in the current BSP charter, it is highly constrained by the clause: “provided that issuance of such certificates of indebtedness can be made only in cases of extraordinary movement in price levels.” A bill currently being considered within Congress would have the effect of deleting this clause.

SDAs were introduced in November 1998 to widen the BSP’s toolkit for liquidity management. 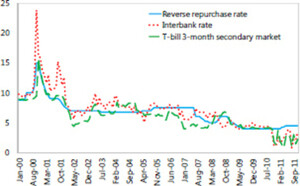 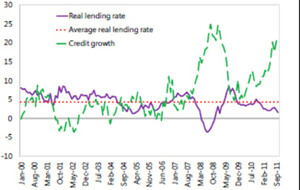 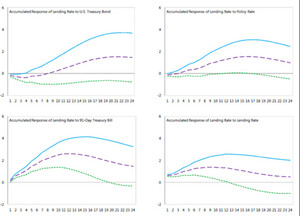 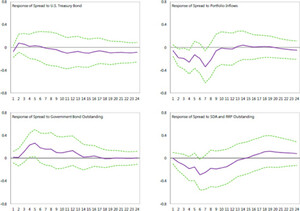 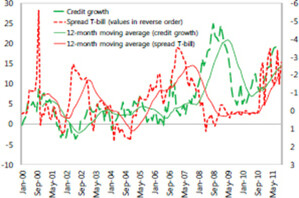