I. Growth Spillovers from the Global Economy to the Philippines 1

1. There are currently important downside risks in advanced economies, arising from the financial turbulence in Europe and the fragile recovery in the United States, with associated risks of spillovers to other economies. A key question for policymakers around the world is what the impact on domestic growth would be in the event of external downside risks materializing. A good understanding of the transmission channels is also crucial for determining the appropriate policy response.

2. As a small open economy, the Philippines is influenced by global developments through both trade and financial channels. Weaker global growth hurts demand for Philippine exports, which in turn affects consumption and investment. The financial system has only limited exposure to Europe and little reliance on foreign wholesale funding, but contagion could still occur through pullbacks of credit by European banks to the domestic corporate sector or a retreat by foreign investors from local equity and bond markets.

3. Exports, remittances, and portfolio and other capital flows are important transmission channels for external shocks. The share of exports in GDP is about 50 percent, making trade a key channel. Remittances are equivalent to 10 percent of GDP and, although they held up well during 2008-2009, a global downturn would hurt the earnings on which they are based. FDI inflows have been stable around 1 percent of GDP. Non-FDI capital flows have increased during the past decade, driven by portfolio inflows.

4. This chapter presents some key facts related to the different channels and estimates the spillover effects using a Bayesian VAR model. The chapter studies the impact of different external shocks on growth in the Philippines, and also investigates the importance of the different transmission channels for each type of shock. The main findings are that external growth shocks have a larger impact than financial shocks on Philippine growth, and that trade is the most important transmission channel. There is also evidence of spillovers from external developments to domestic demand, especially investment.

5. During the past decade both exports and imports have remained stable at about 50 percent of GDP, making trade an important transmission channel. Trade declined as a share of GDP during the global crisis, but subsequently rebounded to the pre-crisis level. The Philippines used to be a major exporter of garments and clothes, but has shifted into the electronics sector and is also diversifying into the agri-business sector. In 2010, electronics accounted for 61 percent of exports and the share of electronics in imports was 30 percent.

6. The destinations of exports have changed during the past decade as the weight of the United States has fallen while those of Asian countries, especially China, have risen. The share of exports to the United States has fallen from nearly 30 percent in 2000 to under 15 percent in 2010 (Figure I.1 During the same period, China’s share has risen from 2 percent to 11 percent. Other emerging Asian economies have also become more important as trading partners, while the shares of the Euro Area and Japan have remained broadly stable at 13 percent and 15 percent, respectively.

8. There is a clear positive correlation between export growth and GDP growth, indicating that export activity has second-round effects on domestic demand. The correlation coefficient between the growth rates of exports and GDP was as high as 0.83 over the past decade. Fixed investment has a higher correlation with exports than does private consumption.

10. Financial contagion could occur through pullbacks of credit by European banks to the domestic corporate sector. Foreign banks have significant claims on the Philippines, in particular the corporate sector which accounts for about 40 percent of the total claims. The aggregate claims of euro area, U.K., and U.S. banks are of similar size at about 4 percent of GDP each. French, German, and Dutch banks account for almost all euro area claims. To a large extent the claims are funded locally, mitigating the risks of foreign bank retrenchment.

11. During the past decade remittances from Overseas Filipino Workers (OFWs) have grown at about 10 percent on average. The ratio of remittances to GDP has increased from 8 percent in 2000 to about 11 percent in recent years, making the Philippines one of the top recipient countries worldwide.

12. The most important source of remittances is the United States, which accounted for more than 40 percent of remittances in 2010. Nevertheless, the sources are diverse with Asia, Europe, and the Middle East each accounting for 10-20 percent of the total flows. Since 2000, the share of remittances originating in the United States has declined by more than 20 percentage points. Meanwhile, the shares of Europe, the Middle East and Canada have increased by 5-10 percent each, reflecting larger diversification.

13. The empirical estimation follows a Bayesian Vector Autoregression (BVAR) approach. The method was suggested by Villani (2009) and uses informative priors on steady-state values. Bayesian estimation improves the efficiency and is particularly appropriate given the short sample period.2

Effects of Global Shocks on Growth in the Philippines

16. Trade is the most important transmission channel. Shocks to external growth have a statistically significant impact on exports, with a 1 percentage point negative external growth shock causing export growth to decline by 10 percentage points after two quarters. Remittances are more resilient, gradually declining by about 1.3 percentage points after five quarters. The more gradual impact may reflect slowly deteriorating labor market conditions in host countries. However, the effect on remittances is not statistically significant at standard levels and, indeed, remittances have held up well during the global crisis reflecting the diversity of destinations of OFWs.

17. The impact of global risk aversion shocks on Philippine growth is smaller than the impact of external growth shocks. Even a relatively large shock increasing the VIX by 10 units—equivalent to the difference between the long-term average VIX level and the elevated levels seen in late 2011—only has a minor effect on Philippine growth (Figure I.3). The negative impact on growth gradually rises to about one third of a percentage point after five quarters. The shock is transmitted through a transitory impact on capital flows and a somewhat more persistent impact on remittances. The adverse effect on remittances may reflect caution in response to a general increase in uncertainty as well as labor market weakening in host countries.

19. The model can be used to produce conditional forecasts based on assumptions about the future paths of some of the exogenous variables. By comparing the resulting GDP growth projections with the corresponding forecasts under the baseline scenario, it is possible to estimate the impact of a specific downside global scenario. The scenario and estimated impacts in this section are presented only for illustrative purposes and do not represent any judgment on likely scenarios for the global economy or the Philippines.

20. In an adverse global scenario growth in the euro area and the United States falls significantly in 2012 and 2013, causing spillovers to growth in other major economies. The scenario from the IMF October 2011 Regional Economic Outlook: Asia and Pacific assumes that growth in the euro are and the United States declines by 3.5 percentage points and 1 percentage point, respectively, below the baseline for two years. The impact on Japan and China is estimated using the IMF’s Global Integrated Monetary and Fiscal (GIMF) model.4 The total impact on external growth relative to the baseline in the G-4 economies weighted by their relative share of Philippine exports is 2.2 percentage points in 2012 and 2.3 percentage points in 2013.

21. Staff estimates indicate that growth in the Philippines could drop by about two third of the decline in external growth before any fiscal and monetary response. GDP growth declines by about 1.5 percentage points in both 2012 and 2013 relative to the baseline projection (Figure I.4). The impact is calculated before any fiscal and monetary response. The output gap turns negative, contributing to a decline in inflation, and the fiscal balance deteriorates due to revenue automatic stabilizers.5 The impact on exports and fixed investment is larger than the impact on private consumption, reflecting the resilience of remittances. The current account balance falls at first as exports decline faster than imports, and then rises as weaker domestic demand leads to lower imports.

22. The scenario analysis shows that the effects of weaker economic conditions in the euro area and United States could have a significant impact on the Philippines. To some extent the effects could be mitigated by resilience in other key trading partners, such as the ASEAN countries, as well as the deployment of a range of policy tools. Many of the measures that were successful during the 2008-2009 global crisis could be usefully reactivated.

Other recent IMF papers using the same methodology are Duttagupta and Barrera (2010) studying the effects of the global crisis on Canada, Osterholm and Zettelmeyer (2008) investigating spillovers to Latin America, and Porter (2010) studying price dynamics in China.

The estimated impact of external growth is in line with other estimates for the Philippines. The IMF October 2011 Regional Economic Outlook: Asia and Pacific finds similar effects using another methodology to investigate the vulnerability of selected Asian countries to a slowdown in the United States and the euro area. The estimated effect for the Philippines was larger than for China, India, and Indonesia, but smaller than for other ASEAN economies.

The estimated impact of the output gap on inflation is taken from Peiris (2011). It is assumed that a 1 percentage point decline in the output gap causes the fiscal revenue to GDP ratio to fall by about 0.1 percent of GDP, and that nominal expenditure is unchanged.

Deviations from Baseline in Downside Scenario 1/ 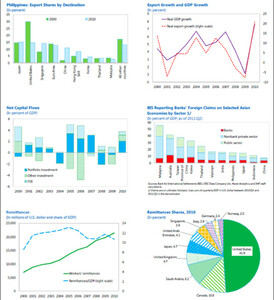 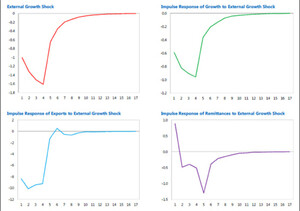 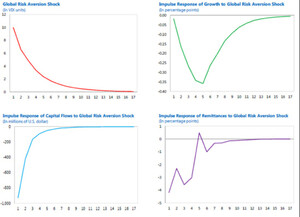 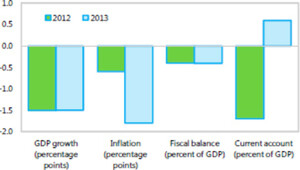