Mexico’s trade integration has been important for growth. But the high export growth experienced after joining the GATT, and particularly NAFTA, has been followed by a more muted performance since 2000. Direct competition from China may have, in part, played a role, but the estimated magnitude appears moderate with Mexico’s flexible exchange rate helping to mitigate the impact. An indirect channel may have also been at play, with a shift of production from North America to Asia linked to productivity growth differentials during this period. More recently, there have been signs of renewed export growth which could be associated with a significant rebound in U.S. manufacturing and Mexico’s regained advantage in certain manufacturing segments. Over the medium term, reforms to improve productivity would be important to sustain export dynamism in Mexico.

1. Since trade liberalization three decades ago, Mexico has been transformed from a predominantly oil exporter to an open economy with a diversified export basket. Export concentration, as measured by the Herfindahl index using 4-digit SITC data, shows a clear pattern of continued decline in concentration since early 1980’s. This is the period that Mexico transformed from a predominantly oil exporter into a major exporter of manufacturing goods. During the same period, Mexico also became more open to trade. The enactment of NAFTA in 1994 significantly boosted Mexico’s openness, particularly to the U.S. market. Total exports and imports as a share of GDP, a standard measure of trade openness, grew from less than 30 percent of GDP in 1980 to about 60 percent in 2009. By 2009, Mexico was an open economy with an export basket as diversified as many peer countries and leading export power houses.

3. The export basket of Mexico has been evolving over time. Among the top 10 products that have the highest revealed comparative advantage (RCA) scores, there are only 4 overlapping products between 1996 and 2009. Notably, petroleum dropped out the top 10 list during that period while motor vehicles became one of the top products that Mexico appears to have comparative advantage on.

Calculations are based on 3-digit SITC (rev.1) data from UN COMTRADE. The exact RCA scores and rankings will be different if different revisions of SITC codes are used.

Calculations are based on 3-digit SITC (rev.1) data from UN COMTRADE. The exact RCA scores and rankings will be different if different revisions of SITC codes are used.

5. Relatively moderate import growth in the U.S. in the 2000s has in part contributed to Mexico’s relatively low export growth in this period. Average goods import growth in the U.S. during 2000—07 is about 4½ percent per annum, slower than both the average growth rate in the U.S. during the 1990s and other comparator groups during the same period, most notably developing and emerging economies. Given Mexico’s large exposures to the U.S. market, like Canada, these two countries saw their exports growth decelerate considerably during the 2000s. This is in contrast to countries that have greater trade with more dynamic developing and emerging economies.

6. Mexico’s economic growth has been significantly correlated with its export performance. After the Tequila crisis and joining NAFTA, Mexico’s economic growth tended to move in tandem with its export growth, particularly goods export. The simple correlation between the two growth rates is high at 0.86 during 1996—2010. While there were many domestic factors at play,2 the lackluster export performance since 2001 could help explain Mexico’s overall growth in the 2000s.

7. A structural shift in manufacturing production from North America to Asia can help explain the relatively low export growth. A significant fraction of Mexico’s exports are by the Maquila industry, which is an integral part of the North America supply chain. The result of moving production to Asia by U.S. companies, as suggested by an increasing share of U.S. FDI in Asia and a substantial moderation of manufacturing growth in the US, meant that the exports associated with the North America supply chain from Mexico were also shipped to Asia. As a result, the export performance of the Maquila industry was particularly weak after 2000.

9. Mexico’s relatively lower productivity growth may have influenced outsourcing decision to Asia, particularly China. Average total factor productivity growth in Mexico was markedly lower during 2001—07, before the global crisis, compared to the period of 1996—2000. The lack of productivity gains in the 2000s became more striking when compared with China. During the same period, China experienced an acceleration of productivity growth as well as an export boom, following significant structural reforms it undertook during the late 1990s and the early 2000s, including restructuring state-owned enterprises and reforming the banking sector.4

10. Remaining export industries in Mexico have faced increased direct competition from China. In 2001, China joined the WTO and gained greater access to the U.S. market. China’s exports to the U.S. soon took off while the gains of market share by Mexico stopped. In terms of similarity, both China and Mexico export large quantity of manufacturing goods and the similarity between exports from the countries is high and more so than many other countries that are also important players in the U.S. market.

11. A constant market share (CMS) analysis indicates that Mexico’s exports have lost competitiveness, particularly to China, but the overall magnitude of the direct China effect appears moderate. After gaining competitiveness for 15 straight years in the US, Mexico started to see its competitiveness eroding at around 2001. The loss of competitiveness is more pronounced when China is included than when China is excluded, suggesting a direct China role. The reverse is, however, not true. China has been gaining competitiveness regardless of whether Mexico is considered or not. The direct impact from China on Mexico’s exports, as measured by the difference between Mexico’s competitiveness gain with and without China, increased substantially after 2001 and peaked at around 3 percent of Mexico’s exports in 2005, a moderate overall effect.5 This calculation however does not necessarily capture all potential channels of impact from China, including terms of trade effects and shift of production to Asia.6 On the other hand, the identified China effect may not be limited to China, but reflect the impact of the entire Asia supply chain.

12. However, there is considerable heterogeneity across products, with some sectors experiencing stronger effects. This can be seen from the wide range of China effects on products that are grouped by their technology intensities (see appendix for the definition of technology intensity). While the China effect on Mexico’s high-tech exports was nearly 8 percent of its high-tech exports to the U.S. in 2005, the China effect on resource-based low technology exports was on average negligible. Even for products of the same technology intensity, some were affected more than others. For example, while Mexico’s auto exports to the U.S. so far experienced little competition from China, the direct competition from China on machinery exports has been very fierce.

13. More generally, countries with greater export similarity to China have shown a larger effect from China’s growing presence in global trade. A cross section correlation between export similarity with China and the China effect in 2005, when the China effects peaked for most countries, depict a clear pattern that more similarity with China is associated with more negative impact from China. In fact, some countries, e.g., Korea, responded by moving to industries that there is less competition from China. The similarity of exports between Korea and China has been declining in recent years. Moreover, China’s exports are closer to what Korea was exporting 10 years ago than what Korea is exporting today. While similar response may have also happened in Mexico,7 it appears to be less strong compared to Korea’s, at least initially.

15. More recently, the recovery in U.S. manufacturing, the depreciation of the peso and increase in relative costs in China may have contributed to the rebound in Mexico’s exports. The recovery in manufacturing activity in the U.S. has been strong, particularly driven by robust exports, which have also benefited Mexico’s exports. Meanwhile, RMB is currently appreciating at an annualized rate of about 6 percent against USD. Wage growth is also brisk in China, at about 20 percent annually, although unit labor cost is growing at a slower pace due to productivity gains. This has allowed Mexico to regain some competitiveness edge against China, especially in sectors that are sensitive to transportation cost. There are in fact some nascent signs that exports of bulky household goods, such as refrigerators, are getting stronger.

16. However, efforts to boost productivity would be important to sustain export growth over the medium term. Several sectors including telecom, consumer staples, and cement remain dominated by a few private market participants and efficiency is low in the energy sector that is dominated by state monopolies. The quality of education is poor and long-standing contractual rigidities in the labor market remain. Violence from organized crime has hindered investment. Therefore, measures to foster competition and labor flexibility, improve education and reinforce domestic security are all crucial to unleash the potential of Mexico untapped productivity growth, which will ultimately be required to sustain continued strong export growth. In this regard, the recent anti-trust reform is a welcome right step to increase competition.

One important caveat is that TFP may be endogenouswhereby the derived low TFP growth in Mexico could be a result of competition from China.

Hanson and Robertson (2010) also tried to derive the impact from China’s competition by estimating a gravity equation. Despite the different methodology, the magnitude of the China effect on Mexico’s manufacturing exports is estimated to be between 0.2 to 3.4 percent during 1995-2005, similar to this paper’s finding.

For example, the income effect due to terms of trade changes, which could be a result of competition from China, is not captured by the analysis. Such effect could be quite important.

Chiquiar, Fragoso and Ramos-Francia (2007) documented such response in Mexico through 2005.

It should be noted that the quality of wage data in China is known to be of low quality. Therefore, this paper refrains from using wage data and ULC-based real exchange rate to conduct regression analysis.

The shifting exports of ex-China asia

(In percent of exports to US)

The China effect on Mexico’s exports

(in percent of exports to US)

Export Similarity and the China Effect

Export Similarity with China in the US

Exports: US and Mexico

(in millions of US dollar)

(in percent of total exports) 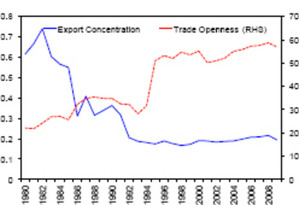 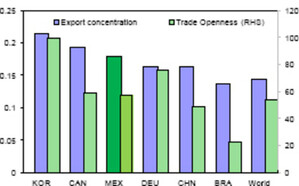 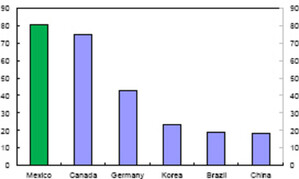 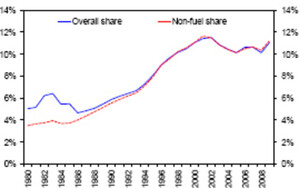 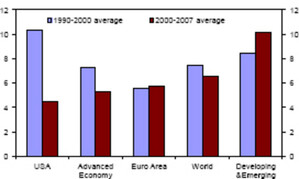 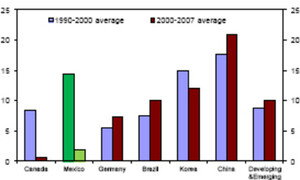 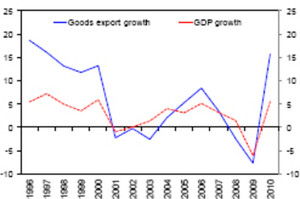 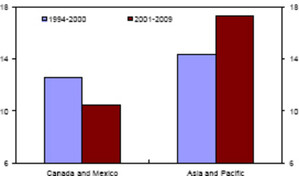 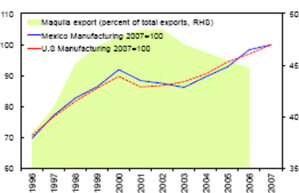 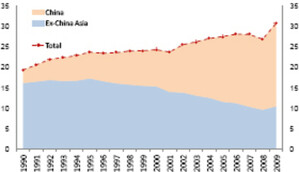 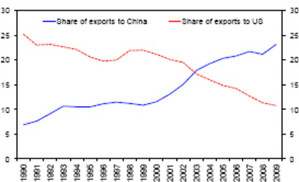 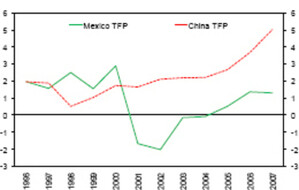 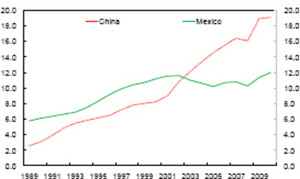 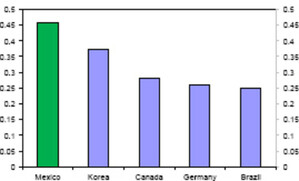 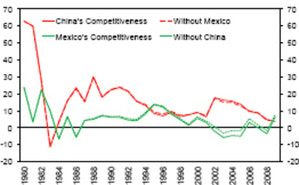 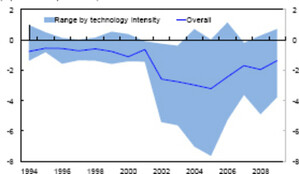 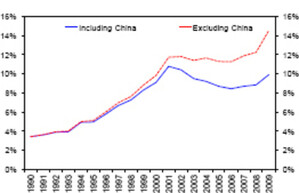 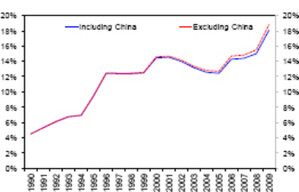 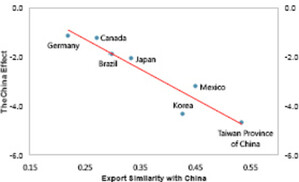 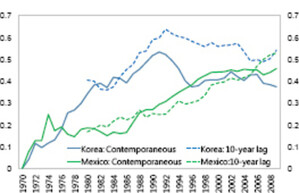 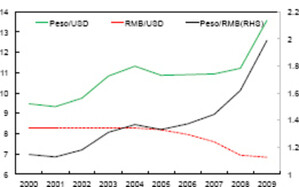 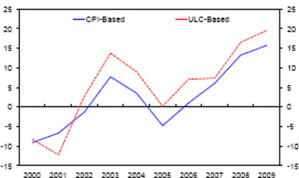 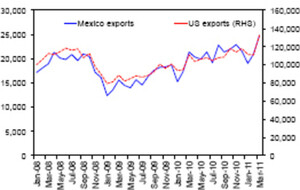 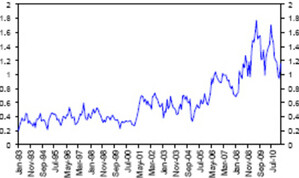