I. Potential Growth and the Output Gap in Mexico1

Decomposing the growth process in trend and cyclical factors represents an important challenge, with implications for policy decisions. This paper applies several methodologies to the case of Mexico and tries to assess to what extent these methodologies adequately capture cyclical changes. The results suggest that care is needed when using these indicators in real time to assess the stage of the cycle, particularly in the presence of large shocks, and that a variety of macroeconomic indicators are needed to evaluate and validate the results.

A. The Output Gap

1. Estimates of the output gap are important for the conduction of macroeconomic policies. The central bank’s inflation targeting framework entails assessing if the projected output implied by the monetary policy stance is consistent with the inflation target. A measure of the output gap is also helpful to assess the stance of fiscal policy and fiscal sustainability—even when the fiscal rule is not a structural one.

2. However, estimating the output gap entails significant challenges. Since potential output is not directly observable, it has to be inferred from the data. However, changes in actual output could reflect cyclical shocks or permanent impacts to potential output. Inferring whether a shock is cyclical or temporary can be a difficult task. As a result, an ample array of methodologies has been used in the literature to estimate the output gap, with filters frequently used to separate cyclical and structural components. It should be noted, however, that these estimates are subject to substantial uncertainty.

3. The end-point problem is particularly important. Some of the methodologies employed, including the HP filter, have been criticized on several grounds, including that the end-point has too much of an impact on the trend of the series. While this could be addressed, it is still hard to correctly identify a shock in real-time, with subsequent data providing relevant information, which can result in estimates that are not consistent across time. Several approaches have been used to reduce the weight of the last observation—including through the use of forecast—while multivariate filters use different variables in an attempt to identify the nature of the shock.

4. The pre-crisis period entails an interesting test to these methodologies. The unusually large cycle associated with the global crisis makes identifying cyclical and structural components a challenge. The availability of some post-crisis data allows us to compare real time and full sample results to assess their consistency.

6. A univariate HP filter is probably the most popular approach. This method entails minimizing the square deviations from the trend (which basically penalizes the cyclical component) and the squared changes in the trend component (which penalizes variations in the growth rate of the structural component). When they proposed this method Hodrick and Prescott (1997) set the smoothness of the trend (lambda=1600) such that the resulting cyclical patterns made sense using US post-war data. This smoothness parameter has become the standard when estimating the output gap, even though studies like Marcet and Ravn (2004) contest its validity outside the US.

7. This approach suggests a large pre-crisis positive output gap, using full sample data. The real-time estimates, however, suggest the gap was nil in 2008. The large decline in output following the 2008 financial crisis is behind the difference between the two estimations. The estimated pre-crisis potential output in the full sample is lower than the one using just pre-crisis data, as the filter assigns some of the decline to the structural component. Therefore, and given that changes in the growth rate of potential are penalized, the decline in the estimated potential “anticipates” the crisis.

10. Information from macroeconomic relations could help improve univariate filters. We estimated the output gap using the Phillips Curve, the IS Curve,4 and Okun’s Law, as in Fuentes et al (2007). Core inflation, as defined by the Mexican authorities, is used in all three models. A backward looking Phillips curve is used as second signal equation in the first multivariate filter; the second one incorporates a standard backward looking IS curve; finally, while the third model builds on the first one by adding Okun’s Law.

11. Using a Phillips Curve and an IS curve in the multivariate filter did not yield significantly different results to the univariate filter. Similar to the univariate HP filter, the real-time results suggest a 3 percent positive gap right before the crisis, while the full-sample results yielded larger gaps.5 The lack of significant improvement from adding a Philips curve is not surprising, considering that Ramos-Francia and Torres (2006) found a small and non-significant coefficient for a backward-looking Phillips curve.

12. The multivariate filter using Okun’s Law shows less cyclical movements. Given that the actual rate of unemployment increased following the crisis, and has remained above pre-crisis levels, we added an equation relating unemployment to the output gap. While the results were sensitive to the choice of potential output’s smoothness, all of them showed a pre-crisis negative output gap using real-time estimates. Also, the time consistency of this model is superior to the univariate and the bivariate filters using the Phillips and IS curves, albeit not so for the pre-crisis period.

13. The substantial variation in results, particularly when considering real-time estimates, suggests caution should be used. Most models yielded different results for the pre-crisis gaps using real-time and full sample estimates. We performed two tests based on Fuentes et al (2007) to assess which models perform better in terms of both internal consistency (i.e., comparing real time vs. full sample estimates) and inflation forecasting.6

14. Time consistency of the estimates. We compared the results from real-time and ex-post estimation for the battery of models. We carried out the exercise for the period 2000—2009.7 Some of the models had quite strong consistency, as suggested by high correlations and relative small squared errors—with persistence in potential growth helping as expected.

15. Forecast performance of the estimates. We compared the root mean squared error of two alternative forecasting models: a benchmark inflation autoregressive model and an extended model that added the real-time output gap estimates.

16. During the last three decades, growth has averaged 2.5—2.75 percent. Even during the pre-crisis period, growth was below 3.5 percent on average. Recent papers have tried to explain these results pointing to a large list of factors.8

17. Potential growth was estimated using growth accounting. Growth is decomposed in the contribution from capital and labor inputs, with TFP calculated as a residual. The distribution in cyclical and structural factors is made at the disaggregated level using a simple HP filter—subject to all the caveats mentioned earlier—albeit incorporating staff forecasts for these variables to limit end-point problems. The purpose is to assess how much can be explained by labor and capital accumulation, as opposed to TFP, which is harder to estimate, and for which an underlying historical growth rate is used. Similar to Krajnyak (2010) we build series for the capital stock and labor input. A share of 33 percent for capital and 67 percent for labor is used.9

This is different from the HP filter approach, which implicitly assumes a model with cyclical and structural shocks that follow a random walk.

Mexico officially adopted an inflation targeting regime in 2000. In order to estimate the inflation objective prior to that year, we used the inflation target estimates presented by Galindo and Ross (2005) from 1995 to 1999. For the period between 1990 and 1994, we assumed that the target was equal to 80 percent of the realized y/y inflation. We also assumed that the policy interest rate was equal to the 28 days CETES rate before the introduction of a policy rate by Banxico.

The graphs shown in panel 2 correspond to a lambda equal to 1,600. We also estimated the models setting lambda equal to 5,600 and 10,000, with results similar to those using the univariate filter.

A robustness test was performed for starting in 1997 in order to have two full economic cycles. The results did not change significantly.

The sample was limited to 2009 in order to avoid the end-point problem mentioned above.

Our results would not change significantly if we assume a 60 percent share of labor, as found by Garcia-Verdu (2005).

Output Gap as a Share of Potential Real GDP

Output Gap as a Share of Potential Real GDP 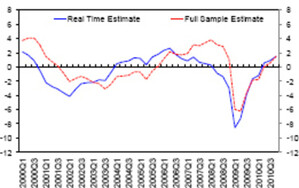 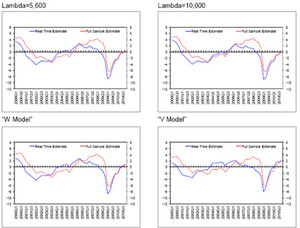 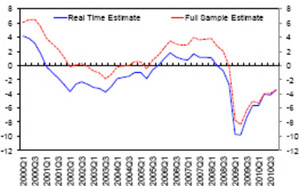 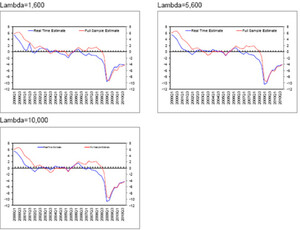 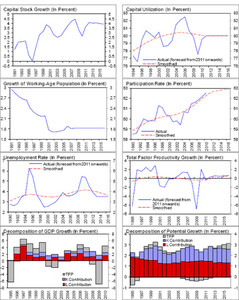 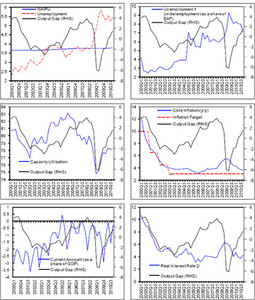