With balanced budget rules, the deficits of U.S. state and local governments (SLGs) have remained low in the aftermath of the Great Recession, but the resulting fiscal contraction has partially offset the positive effects of federal stimulus. While tax receipts are now recovering, SLGs will need to continue their fiscal adjustment due to the expiration of federal emergency aid. The main medium-term challenges include unfunded pension and other retirement benefits, and rising health care costs.

1. SLGs have so far managed to cope with the fallout from the Great Recession, but at a considerable social cost. The recession hit tax collections very hard given the significant exposure to very weak housing and labor markets and consumer spending. Aggressive spending cuts, some revenue measures, and reserve drawdown have kept the operating budgets roughly balanced as required by law, with a significant federal emergency aid smoothing adjustment to lower revenues. However, the involuntary fiscal consolidation at the state and local level has imparted considerable social costs, with cuts in education, health, transport, and welfare systems, which together account for the majority of SLG outlays. The state and local governments account for almost 20 percent of GDP in terms of total expenditures (on a GFSM-2001 basis), about 12 percent of aggregate purchases (on the national accounts basis) and 15 percent of total civilian employment.

2. Although the tax receipts are now recovering, state and local governments will need to continue fiscal adjustment, while addressing unfunded long-term commitments. Emergency federal aid will be phased out soon, and the renewed declines in house prices pose risks especially to local governments. Rainy-day funds which have been depleted in almost half of the states will need to be replenished to rebuild room for maneuver. The state and local governments will also need to continue addressing their unfunded entitlements, especially pensions, which remain the long-term risk for a number of states due to strong legal protections of the already-accrued pension benefits. The SLGs will also face structural spending pressures from health care, both through higher Medicaid outlays and health benefits for government retirees.

3. Following a spell of risk aversion in the state and local government bond markets late last year, the situation has calmed down significantly. Lower bond supply following the expiration of the Build-America-Bond program, improved tax collections, and adjustment measures adopted by the lowest-rated states (California, Illinois) helped improve the market sentiment. More generally, defaults are unlikely at the state level given low debt, balanced budget rules, and statutory protections for investors. The last state default occurred during the Great Depression in 1933. Defaults at the local level have remained rare, mostly associated with mismanagement or high-risk projects by quasi-government institutions.

A. Fiscal Adjustment in the Aftermath of Great Recession

4. The balanced budget rules impose fiscal discipline but lead to pro-cyclical policies. By statute, almost all state governments (except Vermont) are obliged to maintain balanced operating budgets. During the Great Recession, the available rainy-day reserves proved insufficient and the SLGs were forced to sharply cut back their spending, with the SLG gross debt remaining low around 20 percent of GDP. The involuntary fiscal consolidation has had modest macroeconomic—but more significant social—side effects.

5. Despite the recovering economy, the SLG budgets will remain under pressure for some time given the phase-out of federal aid.

6. The longer-term challenges include unfunded pension liabilities and other retirement benefits, and rising health care costs. The unfunded pension liabilities are the main medium-term policy issue facing the SLGs given legal impediments to their resolution and concentration of the problem among certain states. Almost 90 percent of the full time SLG employees have a defined-benefit pension plan—in contrast with about ¼ of workers in the private sector.

7. The SLGs also have unfunded retirement health care commitments.4 These liabilities have been estimated at over $600 bn by the Pew Center, but are easier to resolve than the pension liabilities in most states—for example through tighter eligibility or higher co-pays—due to less strict regulations. That said, most states have made minimal contributions to their dedicated trust funds, which means there is no potential upside from rising asset prices. Trust fund assets were valued at $31 billion in FY2009, with Alaska and Ohio making up for than ½ of the total. Nearly twenty states continue to finance the health care benefits for their retirees on a pay-as-you-go basis. Overall, the states contributed about $30 bn less than the actuarially-recommended amount in FY2009, according to the Pew Center.

8. Similarly as the federal government, the SLGs finances will need to accommodate rising health care costs. While the recent health care reform is expected to bend the cost curve, the residual cost growth will keep pushing up the cost of state and local Medicaid program as at the federal level.

9. Although the state and local finances remain under pressure, investors are well-protected compared with other stakeholders—vendors, employees, residents—who are being affected more directly.

10. Limited exposure of financial institutions and foreign investors to the U.S. state and local debt limits financial spillovers. The bulk of the $2.9 trillion state and local credit market is owned by the retail sector—often high net worth individuals who benefit from the tax breaks on municipal securities, mutual funds, and insurance companies. The direct commercial bank and dealers’ exposure is about $300 bn, with another over $300 bn held by money market funds. The recently-expired taxable Build America Bonds program broadened the investor base, but overall foreign holdings of municipal bonds remain small ($75 bn).

11. Despite the inherent stability of the state and local debt market, investors perceive even AAA-rated SLG paper as riskier than the Treasuries. Notably, the SLGs have failed to fully benefit from safe haven flows amid the European debt crisis, with their spreads widening during bouts of risk aversion. In fall 2010, spreads have been pushed higher by uncertainty over the extension of tax breaks for the Build American Bond program, and concerns about the long-term unfunded liabilities. However, the situation has calmed down significantly as the bond supply dropped off, tax collections improved, and the least-rated states took measures to balance their budgets.

12. The SLG fiscal adjustment is likely to continue in the near term. The SLGs will put a modest drag on the ongoing recovery, with downside risks from renewed declines in house prices and a phase-out of federal aid.

13. The SLGs should consider improving their budgetary frameworks, including the rainy day strategy. Rainy day funds could be allowed to accumulate beyond the pre-recession levels to limit pro-cyclicality and consideration could be given to saving revenue overperformance from highly cyclical revenues such as capital gains taxes (as in the case of Massachusetts). Many states remain on a one-year budget cycle, with only about 20 states having reported their FY2013 projections to NASBO. A move toward multi-year frameworks would be welcome. Some states are pursuing deeper institutional changes—notably, in California.8

14. The SLGs need to focus on gradually reducing their unfunded liabilities. The SLGs face a difficult trade-off between spending on social services for their residents (such as education) and their commitments to the employees. The SLGs should start making actuarially-sound contributions to their pension systems, continue their push toward more risk sharing, streamline benefits when warranted, and avoid bets for resurrection through high-risk/high-expected return strategies. The states should also strive to base their projections on realistic assumptions. Any remaining states financing their retirement health care benefits pay-as-go should preferably start saving into dedicated trust funds.

This chapter was prepared by Martin Sommer with research assistance from Geoffrey Keim.

Additional federal funds have been provided for infrastructure spending which however cannot be used to balance the operating budget.

Weighed down by union contracts, Vallejo filed for a Chapter 9 bankruptcy in 2008. The city has renegotiated agreements with the key unions, but the process has been protracted and associated with significant legal costs and severe cuts to services. The municipality will likely continue the existing pension payouts, although the pension benefits have been cut for new employees.

There benefits accrue to SLG retirees before they become eligible for Medicare—a federal program.

The frequently-discussed case of California’s IOUs in 2009 was good news for bondholders to the extent the scheme helped conserve cash for debt service.

After the bankruptcy of Orange County, CA in 1994, the creditors were eventually paid off fully using revenue from bonds backed by car registration fees, sales taxes, and other collateral.

According to Moody’s, the average 5-year historical cumulative default rate for investment-grade municipal debt is 0.03 percent, compared to 0.97 percent for corporate issuers, while for speculative-grade debt the rates are 3.4 percent and 21.4 percent for municipals and corporate issuers, respectively. Historical recovery rates for defaulted US municipal bonds are higher, on average, than those for corporate bonds. The average historical 30-day post-default trading price for municipal bonds is $59.91 relative to a par of $100 for the period 1970–2009, much higher than the $37.50 average recovery for corporate senior unsecured bonds over the same period.

Voters approved a Proposition which allows passage of the state budget with a simple majority of votes, down from the previous 2/3. The 2/3 majority is still needed for tax and fee increases. 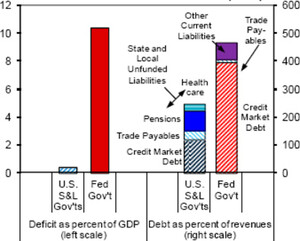 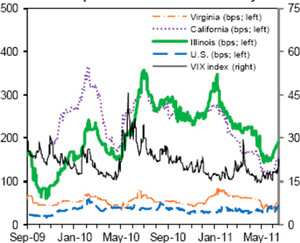 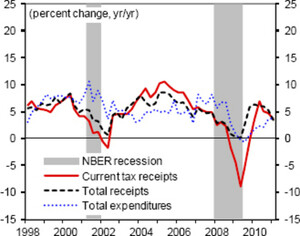 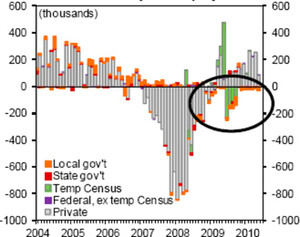 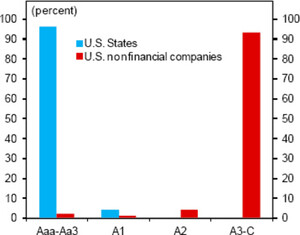