II. Household Deleveraging and the Recovery1

The bursting of the house price bubble and the 2007–08 financial crisis left U.S. consumers with record-high leverage (defined as the ratio of household liabilities to net worth). Despite recovering equity prices and some debt reduction, leverage remains above historic norms given weak house prices. This chapter quantifies the extent to which the post-crisis deleveraging process has held back private consumption, and examines the linkages between foreclosure mitigation efforts, house prices, and consumption.

1. Post-bubble deleveraging by households is a key factor behind the modest recovery. Following a prolonged debt build-up, sharp drops in house and equity prices during the crisis reduced the household sector’s net worth, leaving it with record-high leverage. Consumers responded to the wealth loss by raising their saving rates, in particular by cutting purchases of durable goods. The demand loss drove a plunge in employment, exacerbating the retrenchment by consumers. The drop and subdued recovery of consumption—which accounts for 70 percent of GDP—is a key reason why output remains well below its pre-crisis trend.

2. The adjustment of leverage towards pre-bubble norms is not complete (Figure 6 of the staff report). Household wealth is unlikely to return to a strong upward trend in the near term given the tepid house price outlook. Hence, debt reduction via defaults and household savings will continue for some time, with the future path of house prices a key determinant of the pace and extent of the needed overall adjustment in household debt.

3. How much of the weakness in consumption since the start of the recession be attributed to the deleveraging process? And what would be the effect on consumption and output of alleviating the housing sector and leverage adjustment via mortgage writedowns? This chapter uses a VAR model to quantify some answers to these questions.

4. To quantify the impact of leverage and credit conditions on consumption growth, we estimated a vector autoregression (VAR) model using a sample from 1971:Q1–2010:Q4. The endogenous variables include (1) logarithm of real private consumption expenditure (PCE); (2) logarithm of household real disposable income; (3) an index of changes in bank’s willingness to make consumer installment loans (from the Fed’s Senior Loan Officer Opinion Survey), (4) 30-year mortgage interest rates; (5) logarithm of the core PCE deflator; (6) logarithm of the energy price deflator (a subcomponent of the PCE deflator); and (7) the leverage ratio of the household sector, defined as the ratio of household liabilities to net worth (from the Fed’s Flow of Funds). The use of leverage follows the approach in Bianco and Occhino (2011), and allows us to capture a measure of misalignment between liabilities and net worth as well as the traditional wealth effects that have been the key focus of the prior literature.2 We use two lags in the vector autoregression model based on the Bayesian information criterion—the results are similar if we use up to four lags.

5. The leverage of the household sector and credit supply conditions as captured by banks’ willingness to lend are estimated to be the two key drivers of aggregate consumption. In combination, estimated structural shocks to banks’ willingness to lend and household leverage account for 35 percent of PCE fluctuations over two years (Table 1, Figure 1).3 Shocks to disposable income, mortgage interest rates, and prices also play a role in accounting for short term consumption movements.

6. How much of the post-crisis sluggishness of PCE can be attributed to the heightened leverage ratio? For the period 2007:Q4–2010:Q4, about 60 percent of the deviation of the PCE level from a path predicted by the VAR can be attributed to shocks to the leverage ratio—supporting the notion that heightened leverage and subsequent balance sheet repair have been key headwinds for consumption (Figure 2).4 The tightening of the supply of consumer loans has also been a key restraint on PCE, explaining another 30 percent of the deviation of consumption from its pre-recession trend.

7. The estimates suggest that an improved house price outlook could significantly strengthen consumption by reducing leverage. For instance, the estimated impulse responses suggest that a five percent increase in house prices would raise the level of PCE by about ¾ percent (and GDP by about ½ percent) over five years. In nominal terms, the estimated relationships suggest that a one dollar increase in household net worth would add 5–6 cents to consumption over a horizon of five years. These estimated sensitivities are within the range of results reported in the prior literature.

8. Thus, effective foreclosure mitigation could provide a measurable amount of support to the recovery. We have considered a stylized policy scenario in which one million foreclosures are avoided (along the lines discussed in Selected Issues Chapter 9) for underwater borrowers. An updated estimate of the house price model in Klyuev (2008) suggests that avoiding 1 million foreclosures would raise aggregate house prices by about 3¼–4 percent over five years.5 The estimated VAR impulse-responses then suggest that the impact of the policy (through effects on leverage via house prices and debt) would add about 0.3–0.4 percentage point to the end-2015 GDP level.6

9. The household deleveraging process set-off by the asset price declines of 2007–08 has weighed heavily on the economic recovery, explaining more than half of the weakness of household consumption relative to an estimated pre-recession trend. Still-high leverage (given above-norm debt ratios and a subdued path of housing wealth) suggests that consumption growth should remain moderate in the next several years. The normalization of household leverage is necessary for healthy medium-term household finances and growth, even though it provides a headwind against a faster recovery from the crisis. Sustainable mortgage modifications, which would help to curb the vicious circle between foreclosures, weak house prices, and sluggish aggregate demand and employment, would alleviate some of the pain of the post-bubble adjustment and help to put the economic recovery on a firmer footing.2

We use a Cholesky decomposition, with the following ordering: log of PCE, real disposable income, willingness to lend, PCE deflator, energy price deflator, log of the leverage ratio (liabilities-to-net worth).

We decompose the deviation of actual consumption from the path predicted by the VAR (starting the projection with 2008:Q1) into deviations of outturns from predicted values of all other variables in the system. We thank Timothy Bianco and Filippo Occhino for sharing their Gauss codes for this decomposition.

The updated estimates of the house price model are described in Chapter 1 of this Selected Issues paper. The house price gain is 3¼ or 4 percent depending on whether the houses for which foreclosures are avoided subsequently enter the market or not.

The avoidance of mortgage defaults has two opposing effects on the household sector balance sheet (compared to a baseline with higher foreclosures): it would raise households’ real estate assets given higher house prices (since distress sales would be avoided) but would offer less charge-offs on household debt and less shedding of negative equity. We assume that the modification policy involves a principal debt reduction of about $10,000 per modified mortgage while raising house prices by 3¼-4 percent over 5 years given lower distress sales (mortgage modifications are discussed in Chapter 9 of the Selected Issues Paper—in the present exercise we assume for simplicity that writedowns equal the subsidy offered to banks). By contrast, a foreclosure reduces debt by about $80,000 on average (given by the ratio of mortgage debt charge-offs to total foreclosures over 2008:Q1–2010Q3) and improves net worth by about $8000 as defaulting mortgages are assumed to have 10 percent negative equity. Under our assumptions, avoiding foreclosures improves leverage since the effect through stronger house prices more than offsets the effect of lower debt and negative equity.

Consumer Spending on Goods and Services

Response of Consumption To Various Shocks

Percentage Deviation of Consumption from the Predicted Path: 2007Q4–2010Q4 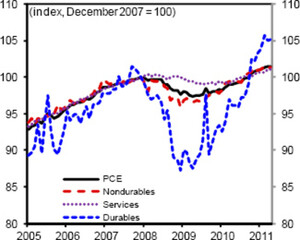 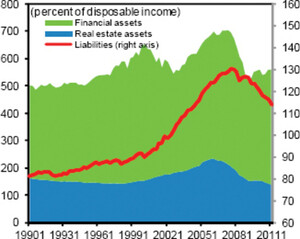 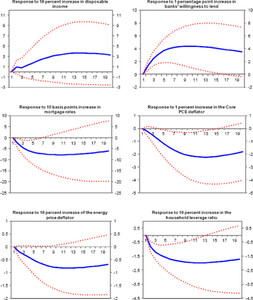 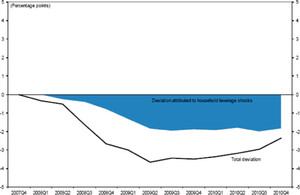