I. History of Fiscal Consolidation in Belgium: Lessons from the Past1

A. Introduction: A Long and Successful History of Fiscal Consolidation

1. Belgium’s impressive past fiscal consolidation is an example for other countries that need to bring down their public debt and also provides insights on how best to address its own current fiscal challenges. After Belgium’s public debt-to-GDP reached a peak of about 135 percent in 1993, it was steadily reduced to about 84 percent by 2007. On the heels of the recent financial crisis and recession, the public debt ratio increased again to about 97 percent in 2010. In view of mounting aging costs and modest growth prospects, resuming fiscal consolidation efforts is needed to avoid hurting long-term growth and prevent unsustainable debt dynamics from setting in. The design of the forthcoming fiscal adjustment will be crucial to bolster its durability. In examining Belgium’s historical experience, this note intends to identify the factors that have been helpful in achieving the large fiscal adjustment as well as those that hampered fiscal consolidation in recent years.

2. Belgium has a unique history of a long and successful large fiscal consolidation. The consolidation efforts, albeit modest in the beginning, started already in the early 1980s. Between the early 1990s and mid-2000s, as part of the EMU qualification process, Belgium staged an impressive reduction in public deficits and debt ratios. The country’s track record of almost a quarter century-long history of sizeable primary surpluses is unique by advanced countries’ standards. This fiscal consolidation was backed by a clearly defined long-term fiscal objective of reducing public debt and a strong political will to achieve this goal. The Maastricht criteria for EMU accession helped frame the fiscal deficit and debt objectives and implied the need to target a balanced budget.

3. Belgium lived through various episodes of fiscal adjustment and each one of these contains important lessons for future consolidation.

B. Timeline of the Past Fiscal Consolidations

4. Consolidation efforts in the early 1980s came in response to a large debt buildup that started in the late 1970s. Belgium shared what other OECD countries also experienced: a secular expansion of the size of government that took place between the 1960s and the late 1980s. Total outlays of the general government continuously grew from below 33 percent of GDP in 1965 to 44.5 percent in 1975 and peaked at 55.3 percent in 1982, after the second oil shock. Total government spending started to crawl back to about 50 percent of GDP only after the public debt ratio exceeded 125 percent of GDP in 1988. Modest deficits in the first half of 1970s quickly gave way to mounting financing needs of 5 percent and then 10 percent of GDP. Triggered by the deficit-debt spiral, interest payments steadily rose from 3.5 percent of GDP in 1970 to over 10 percent by 1988, raising serious concerns about public sector solvency and setting off the first wave of consolidation attempts.

5. The worsening public finances reflected in part the policy response to the recession in the early 1980s. The recession that followed the 1979 oil shock created a surge in unemployment that weighed heavily on social security outlays. In an attempt to curb the layoffs and restore competitiveness, the federal government boosted subsidies to the private sector. High unemployment prompted a swelling of public sector employment without much action to restrain other type of expenditures. Political instability resulted in mounting tax pressures that were nevertheless insufficient to curb the worsening deficit-debt spiral.

6. Key tax and fiscal federalism reforms were aligned with the fiscal consolidation goal and went hand in hand with a significant strengthening of fiscal institutions. The mid-1980s tax reform2 and the 1988–89 fiscal federalism reform that devolved about 40 percent of public spending to regions and communities were accompanied by substantial primary spending constraint at the federal and, to a lesser extent, at the regional level. While independent macroeconomic budgetary forecasts have been undertaken by the Federal Planning Bureau from the mid-1990s, the High Finance Council 3 (HFC) was restructured and given a clear mandate of monitoring and coordinating fiscal policies at the federal and regional levels. In addition, stringent medium-term fiscal frameworks were established for regions and communities, with a possibility for the HFC to make recommendations in order to correct slippages from the medium-term objectives.

8. The Belgian national fiscal adjustment effort during 1994–02 was built on medium-term cooperation agreements between all levels of government. The first such agreement took place in 1994, and stipulated the contribution to the overall consolidation effort by the different layers of government while setting their respective deficit targets in a manner that was compatible with the overall fiscal objectives under the 1992 Convergence Program. Since then, subsequent multiyear agreements were negotiated in 1996, for the period 1996–99; in 1999, for the years 1999–02; and in 2000, upon Belgium entering the final stage of the EMU accession, the first five-year “Internal Stability Pact” for 2001–05. These intergovernmental cooperation agreements proved crucial in cementing the concerted efforts needed to achieve the Maastricht Treaty fiscal objectives.

9. The resulting performance of Belgium under both Convergence Programs (1992–98) and Stability Programs (1998–02) has been, on average, better than expected. Figure 3 illustrates the fiscal objectives set under the annual Stability Programs during 1998–06 and shows that, during 1999–01, the fiscal outcomes outperformed these targets. This outcome was entirely due to the success of the Internal Stability Pact that set and implemented ambitious targets for the regions, communities, and local governments with a combined budget surplus of 0.6 percent of GDP for 2001.

10. Starting in 2003, Belgian performance under the Stability Programs showed an increasing reliance on one-off and temporary measures. 4 After a balanced budget was achieved in the early 2000s, the Stability Program targets became much less ambitious. Earlier aspirations to achieve a fiscal surplus and faster public debt reduction were gradually abandoned and the underlying fiscal stance worsened again, except in 2005. The maintenance of broadly balanced budgets until 2007 was made possible in most years because of sizable one-off and temporary measures. It appears that Belgium was no exception to a more general relaxation of fiscal discipline during the years of booming global economy and falling interest rates. The rather mild application of the Excessive Deficit Procedure (EDP) sanctions to the largest euro area member countries may also have contributed to the weakening of fiscal discipline.

11. During this period, spending of the regions and communities became more pronounced. Before the 1989 fiscal federalism reform, regional entities already had some limited budgetary autonomy (about 3 percent of GDP by 1988) but their funding solely consisted of federal government allocations. From 1989 onwards, regions and communities received structural funding based on the 1989 Special Financing Act and became responsible for their own treasury management. According to the Federal Planning Bureau (2010), between 1995 and 2009 employment in the general government increased by 100,000 positions, 95 percent of which were created at the sub-national government level.

12. Growing tensions about the degree of fiscal devolution to the regions led to a prolonged political impasse and derailed the functioning of the internal stability pacts. The 2007 political crisis and the long time (196 days) it took following the June elections to form a coalition government interrupted the implementation of the internal stability pact and compounded the effect of the economic downturn in the emergence of a sizable budget deficit in 2008. Moreover, the political impasse interrupted the practice of signing forward-looking intergovernmental cooperation agreements: the next cooperation agreement for 2009–10 was only signed in December 2009.

13. The tables below illustrate how the late 2007-early 2008 episode without a federal government contributed to a loosening of fiscal discipline. To facilitate the comparison with the current post-crisis situation, the analysis focuses on the fiscal consolidation plan set forth in the 2006 Stability Program. This program followed a spike in the overall deficit in 2005 (to 2.7 percent of GDP, though less pronounced when the one-off settlement with the national railway company is taken into account) that deviated from the previous low fiscal deficits or small surpluses. Comparing the fiscal objectives for 2006–08 to the actual outcomes shows a significant underperformance in 2007–08, with rising deficits instead of the planned surpluses. Further decomposition into cyclical and structural components for both revenues and expenditures shows that higher-than-expected revenues in 2008 could not prevent the structural deficit from exceeding the Stability Program target by 2 percent of GDP (even before the implementation of the 2009–10 fiscal stimulus).

C. Main Lessons from the Past Consolidation

14. The main lessons from the past consolidation episodes in Belgium can be summarized as follows:

15. Drawing on Belgium’s strong past track record in succeeding a large fiscal consolidation, it would be helpful to improve the following areas in order to meet the adjustment challenge in the coming years: 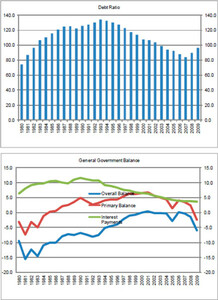 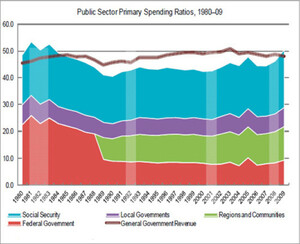 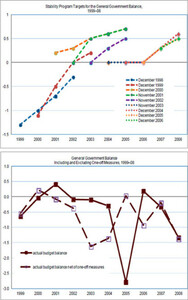