II. Forecasting and Monetary Policy Analysis System for the Philippines1

2. In the Philippines, with the output gap closing in 2010 in light of the rapid economic recovery, and real policy rates significantly below pre-crisis levels, the monetary stance is assessed to be accommodative. An inflation forecast conditional on the WEO forecast for the U.S. economy, global oil prices, and estimated distributions for stochastic shocks in the Philippines suggests that the monetary stance may need to be tightened in the near term for inflation to remain within the Bangko Sentral ng Pilipinas’s (BSP) target range over the policy horizon.

3. The Philippines’ shift to an IFT regime in 2002 has so far yielded low and stable inflation. The national government, through the Development Budget Coordinating Committee (DBCC), sets the inflation target based on the headline consumer price index (CPI) two years ahead in consultation with the BSP. The BSP has full powers over and responsibility for the announcement of the inflation target and the determination of appropriate monetary policy to achieve the target. The target was generally achieved during 2002–07, with average inflation very close to the midpoint average of the target. In early 2008, the extraordinary increase in global commodity prices influenced inflation developments and was closely followed by the global crisis.2

4. The inflation forecast is a major factor considered by the BSP when deciding whether monetary policy instruments should be adjusted to attain the inflation target.3 The government’s targets for annual headline inflation have been set at 4.0 percent for 2011 and 2012 with a tolerance interval of ± 1.0 percentage point (BSP, 2010). In July 2010, the BSP extended through 2014 the 3-5 percent inflation target to help anchor medium-term inflation expectations. According to the BSP, baseline inflation forecasts are generated from the BSP’s single equation model and the multi-equation model.4 The FPAS model estimated below could be viewed as a complementary approach to those econometric approaches.

5. The monetary policy analysis is conducted by extending to better capture Philippine specific factors the small “New Keynesian” macroeconomic model of Berg, Karam, and Laxton (2006a).5 The FPAS model is a stripped down version of a stochastic general equilibrium (DSGE) model with rational expectations. In recent years, the macroeconomic literature has used DSGE models and small New Keynesian models to analyze economic behavior and to forecast future developments. The DSGE models are based on theoretical underpinnings and have been found to be useful for analyzing the effects of structural changes in the economy, as well as the effects of longer-term developments such as persistent fiscal and current account deficits. On the other hand, by virtue of their relatively simple structure, small New Keynesian models have been used for forecasting and policy analysis purposes in central banks and by IMF country desks. A number of inflation-targeting central banks have used similar models as an integral part of their FPAS (see Laxton and others, 2009).

6. To capture the commodity dependence and importance of the banking system in the Philippines, the baseline model is extended to incorporate oil prices and macrofinancial linkages through a credit conditions variable (Carabenciov and others, 2008). In addition, fiscal shocks are introduced to the FPAS model as in Honjo and Hunt (2006). The model features a small open economy including forward-looking aggregate supply and demand with microfoundations and with stylized (realistic) lags in the different monetary transmission channels. External shocks from the rest of the world are captured here by U.S. growth. Output developments in the rest of the world feed directly into the small economy as they influence foreign demand for Philippine products. Changes in foreign inflation and interest rates affect the exchange rate and, subsequently, demand and inflation in the Philippines (Figure 1).

7. The model is estimated using Bayesian techniques based on prior distributions for the parameters from cross-country work and assumptions about the Philippine economy. Bayesian estimation in a situation of a relatively small sample size (which is almost always the case for macro time series data) helps ameliorate the problems of classical econometric estimation, which often gives macro model results that are inconsistent and faced with simultaneity challenges. This is a particularly important aspect for the Philippines where there was a structural change in 2002 when BSP switched to an IFT framework, necessitating a sub-sample estimation from 2002 to 2010 to confirm the robustness of the full sample estimates. The model is estimated based on quarterly data from 1996 to 2010 using prior empirical knowledge about the parameters of interest for the Philippines or cross-country studies on emerging markets. All variables are seasonally adjusted using the X12 filter, with the exception of the interest rate and the exchange rate, and expressed in “gap” terms, defined as deviations from a Hodrick-Prescott time trend.

(1) The aggregate demand equation and results are as follows:

where ygap is the output gap, RRgap the real interest rate gap, zgap the real exchange rate gap, ygapRW the output gap in the United States, FBgap the fiscal gap, η lending conditions based on the ratio of bank credit to GDP, β a series of parameters attached to these variables, and ε ygav an error term that captures other temporary exogenous demand shocks. (An extension of the model to include fiscal and lending conditions is detailed in Appendix 1).

(2) The Philips curve equation and results are as follows:

(3) The uncovered interest parity equation and results are as follows:

(4) The open-economy Taylor-rule and results are as follows:

10. The variance decomposition of all stochastic shocks suggests that demand and supply shocks are nearly equally important in accounting for inflation dynamics. This equality contrasts somewhat with the perceived dominance of supply-side factors in Asia among many policy-makers and results of pure empirical vector-autoregression (VAR) based studies, highlighting the need for more systematic and country-specific analyses to better identify and interpret shocks.

11. Using the estimated parameters and distributions for the stochastic shocks, solutions are derived for the variability in inflation and the output gap under alternative monetary policy reaction functions. First, simulations of the FPAS model search for the “optimal” values for the coefficients of the Taylor rule by minimizing a loss function of inflation and output variability. The loss function takes the form of a standard quadratic form given by:

where λπ and λy are the relative weights on inflation and output-gap variability and πt is the inflation target. For simplicity, the weights are assumed to be equal. Second, the analysis compares the standard deviation of inflation and the output gap of the estimated model with one with the “optimal” coefficients of the Taylor rule given the same size and types of shocks faced by the economy. The simulations suggest that a greater weight on inflation and a smaller weight on output and the exchange rate would help to reduce macroeconomic volatility (text table).

12. The model-based forecast suggests that in order for inflation to remain within the BSP’s target range, the monetary stance would need to be tightened over the next two years. The analysis forecasts inflation and other real economy factors (such as the output gap) conditional on the WEO forecast for the U.S. economy, global oil prices, and estimated distributions for stochastic shocks including supply-side factors in the Philippines.6 The simulations based on the estimated Taylor-rule suggest that over the next two years the BSP would have to unwind the monetary easing that it put in place during the crisis in order to keep headline inflation within the 3–5 percent target range (text figure).

13. The forecasting and monetary policy analysis model of the Philippine economy presented in this chapter could be helpful to guide monetary policy decisions. The model estimates shed light on the monetary transmission mechanism and impact of domestic and global shocks. The out-of-sample forecast performance of the model is good. The model could also be used for risk-assessments of the baseline inflation forecast and counter-factual scenarios conditional on the global economic outlook and alternative policy reactions functions. Preliminary simulations suggest that the appropriate response of the BSP to keep inflation within target range would be to roughly unwind its crisis-related monetary easing over the next two years. Philippines’ susceptibility to global demand conditions also suggests that the timing of the monetary normalization could be recalibrated in the event of renewed global turmoil.

14. Further work could extend the FPAS model for the Philippines in a number of directions. First, the impact of shocks to potential output could be explicitly accounted for, rather than implicitly gauged through shocks to the output gap. Second, the implications of food prices for “core” inflation and inflation expectations could be further explored, given the large weight of food in the Philippines consumer price index. Finally, the recent surge in capital inflows to the Philippines could warrant a more explicit modeling of their role, possibly in a full-DSGE model.

The BSP’s monetary policy framework provides for exemption clauses to recognize the fact that there are limits to the effectiveness of monetary policy and that there may be occasional breaches owing to factors beyond the control of the central bank (see Guinigundo, 2010).

In conveying to the public the views of the BSP, an assessment of the output gap is presented along with the inflation forecast. The BSP also assesses inflation expectations, evidence of second-round effects, and the yield curve among a host of critical factors (see Guinigundo, 2010).

See McNelis and Bagsic, (2007) for details on the BSP inflation forecasting models and performance.

This contrast with the financial programming approach, which emphasizes the role of monetary aggregates in analyzing the monetary sector (see Berg, Karam, and Laxton, 2006, for a discussion of the different approaches). 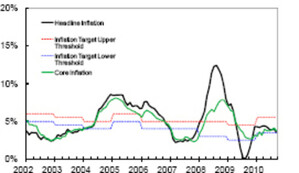 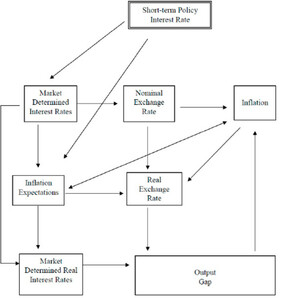 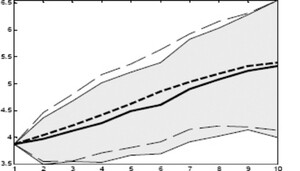 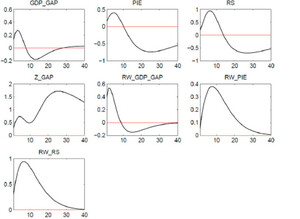 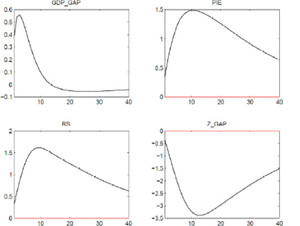 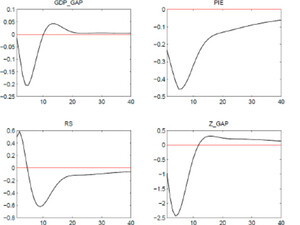