Threats to external stability in the pre-crisis period have now been reduced substantially and foreign non-debt creating flows have declined, sufficient to support external stability. The global economic downturn has raised challenges for evaluating the countries’ fiscal stance and fiscal policy focus should be lowering support to debt sustainability, private sector development, and the currency board stability. The two entity pension funds have been under increasing financial pressures. Putting the public pension systems on a sound footing will encompass a number of complementary steps.

Threats to external stability in the pre-crisis period have now been reduced substantially and foreign non-debt creating flows have declined, sufficient to support external stability. The global economic downturn has raised challenges for evaluating the countries’ fiscal stance and fiscal policy focus should be lowering support to debt sustainability, private sector development, and the currency board stability. The two entity pension funds have been under increasing financial pressures. Putting the public pension systems on a sound footing will encompass a number of complementary steps.

1. The public pension system in Bosnia and Herzegovina (BiH) consists of two entity-administered pension funds: one in the Federation, the other in Republika Srpska (RS). Despite substantial past reforms, the two systems now face increasing financial pressures—some stemming from adverse demographic trends, some from the design of the pension system themselves (Box 1), and others from a general fiscal deterioration. Expenditure on public pensions has been one of the fastest-growing components of public expenditure in the two entities. In the Federation, this spending rose from 7.7 percent of GDP in 2005 to 10.0 percent of GDP in 2009; and in the RS, from 7.8 percent of GDP to 9 percent of GDP over the same period. Any credible strategy to put public finances on a sustainable path needs to feature a reform of the public pensions in both entities.

2. The breadth of the issues facing the pension systems in BiH makes it impossible to address them in a single analytical note. That is why this paper is selective in scope, highlighting some of the aspects that deserve priority attention. It provides a brief overview of the two systems and quantifies the implications of the recent trends in the system dependency ratios. Given the acute fiscal pressures in the Federation, the focus in the second part is on the public pension system here, specifically on its fastest growing segment—privileged pensions.

3. The two pension systems are conceived as pay-as-you-go schemes, with current workers’ contributions from wages and salaries funding the pension payments. The main parameters of the system are summarized in Table 1. There are three main types of pensions: old-age, disability and survivor pension. The system is complicated by the presence of privileged pensions for selected groups of beneficiaries, most of them war-veteran related. These benefits are governed by specific rules and are mainly funded from the Entity central governments’ budget resources (budgets make transfers to pension funds for that purpose). Recently, the ability of Entity budgets to provide the matching funds for payment of privileged pensions has been undermined by weak control over recurrent spending in the Federation, a rapid expansion of overall spending in the RS, and by the drop in revenue as a result of the economic downturn.

4. There is growing realization among policymakers and the general public that changes need to be made to put the system of pension insurance on a sound footing. Proposals include (a) supplementing the existing public pension systems with voluntary private pension schemes; (b) introducing parametric changes to the existing public pension schemes (raising the retirement age; raising the length of required contributory service); and (c) reforming the system of privileged pensions.

Some features of the pension system tend to exacerbate the financial pressures on the pension funds. Accrual rates are structured in a way that encourages short contribution careers: the rates are higher for the first twenty years than for the next twenty years, and after 40 years retirement is triggered. Disability pension provisions are more generous that those for old-age pension. That, together with rather broad eligibility standards—including inability to perform one’s last job, rather than simply any job—creates an incentive for workers to retire under the disability conditions. The law limiting the pension payments to the amount collected notwithstanding, pensions have been effectively indexed to wage growth. This indexation is overly generous and contrasts with practice of most other countries, where pensions are indexed to inflation, or to a combination of wage growth and inflation.

5. The case for a pension reform is clear from the fiscal perspective. The main pressure comes from the unfavorable system dependency ratios—simply put, there are too few paying contributors for the number of pensioners. The reason is not merely demographic (Box 1). Effective solutions need to consider a fundamental overhaul of the system in a way that tips the incentives toward increased formal sector employment and raises contribution payment compliance. At the same time, retirement criteria need to be tightened and the calculation of pensions tied more closely to the number of years of the contributory history to discourage early retirement.

6. Simply raising contribution rates to deal with financial pressures is not a viable long-term option. At their current high levels, the contribution rates provide disincentives to formal employment. Their increase would only aggravate the adverse trends in the system dependency ratios. Across-the-board cuts in pensions, which represent, on average, about 30 percent of the average wage in the Federation and less than that in the RS, might not be politically or socially acceptable. As a result, the entity governments would likely be faced with demands to top up the pension fund resources from general government budgetary funds.

7. Continuation of the recent adverse trends in the system dependency rates threatens the financial integrity of the pension systems. In the last two years, the system dependency rate worsened by more than 10 percent in the Federation and about 8 percent in the RS. Another 10 percent deterioration, relative to 2009, would require a matching increase in budget transfers to the Entity pension funds to fill the emerging gaps. This is shown in Table 2. The analytical background is summarized in Box 2.

Bosnia and Herzegovina: Budget Impact of an Increase in System Dependency Ratio

Gross wage is a calculated average wage of the contributors.

Bosnia and Herzegovina: Budget Impact of an Increase in System Dependency Ratio

Gross wage is a calculated average wage of the contributors.

BiH’s public pension insurance is administered through a system of pension funds at the entity level. It is based on the pay-as-you-go (PAYG) principle, with current workers’ contributions funding current obligations toward current pensioners.

PAYG systems need to ensure an ongoing balance between the amount contributions and benefits. Demographic changes, including an aging population, and increases in life expectancy, require changes to contribution rate or the system benefits. For BiH, the effect of youth worker emigration, which raises the demographic dependency ratio, is expected to place additional strain on the system’s fiscal sustainability.

In a PAYG system, current period benefits are financed from current revenues, typically via a payroll tax. For revenues to equal expenditure, the payroll tax rate (α) has to equal the pension bill divided by the wage bill, or to the ratio of pensioners (M) to active contributors (N) times the replacement rate (β), where the replacement rate is defined as the ratio of the average pension to the average wage. Thus we can write

where τ is the ratio of budgetary transfers to pension expenditures (τ >0 implies transfers from the budget to the pension fund; τ <0 implies a transfer of the pension fund surplus to the budget). More generally, the ratio M/N can be expressed as a function of the demographic dependency ratio (M*/N*), where M* is the number of people 65 years and older and N* is the number of people between 15 and 64 years of age:

where γ is temed as the pension system coverage ratio, with its value depending on the maturity of the system, retirement policies, labor force participation rates and other labor market conditions.

8. The system of privileged pensions consists of a set of government decrees initially introduced to facilitate the reform of the BiH military (Table 3). It provided early retirement options for large numbers of military personnel that would otherwise have been rendered obsolete as a result of the reform. The benefits were subsequently extended to army volunteers, war veterans and families of fallen soldiers. As of April 2010, these decrees covered about 21,500 beneficiaries. While these pensions are administered by the Federation Pension and Disability Insurance Fund (PIO), for great part they are funded from general government revenues. The annual provision is included in the central government’s budget under transfers to other levels of government (i.e., the PIO).

9. In January 2009, an amendment of Article 94 of the PIO Law, recognized the existing provisions for double-counting of years of service for members of BiH Army, the Croatian Defense Council and police forces during the 1992–95 war as budget liabilities. By end-2009 about 78,000 veterans used this provision creating a new obligation of the central government budget toward the pension fund in an annual amount of KM 71 million. With this amount included, total annual obligations of the central government budget toward the PIO reached KM 190 million in 2009 (1.2 percent of GDP). During Jan–March 2010 the number of veterans increased to 80,000 thousand raising the annual obligation to KM 77 million (0.5 percent of GDP).

10. The risks of the privileged pension component to the contributory scheme are several. They include the rapid increase in the number of beneficiaries (i.e., the number of war veterans using double-counting of years of service could go up for as many as soldiers during the 1992–95 war) and the relatively high average pension entitlement. It is true that the payment obligations related to the privileged pension beneficiaries are expected to be funded from general government revenues. However, as the central budget finds itself strapped for funds, the temptation to squeeze the conventional pensions in order accommodate the financial demands of privileged pensions will only increase.2

12. The two entity pension funds, administered on a pay-as-you-go principle, have been under increasing financial pressures—mainly from demographic trends, but also from deterioration of the general fiscal situation and the design of the pension systems themselves. Expenditure on public pensions has been one of the fastest-growing components of public expenditure in the two entities. One symptom of the weakness of the system are the high and rising system dependency ratios—too few paying contributors relative to the number of pensioners. In the Federation, the system of privileged pensions (with early retirement benefits for selected groups of beneficiaries) poses risks to the contributory pension system. The quadrupling in the number of beneficiaries in the last three years and the corresponding increase in budget cofinancing requirements have strained the Entity budget and resulted in a run-up of arrears in payment obligations of the budget toward the PIO.

13. Putting the public pension systems on a sound footing should encompass a number of complementary steps: tackling disincentives to formal sector employment and taking measures to raise contribution payment compliance; introducing further parametric changes, including an increase in the retirement age and in the length of required contributory service; and, reforming the system of privileged pensions. The Entities have taken the first steps. The Federation government adopted a pension reform strategy in June. However, the strategy needs to be fleshed out in greater detail and put to public debate before Parliament considers it and before it can serve as a blueprint for reform implementation. The RS Parliament has adopted the RS pension strategy and the government is ready to begin implementation immediately after the October election.

Prepared by Milan Cuc and Irena Jankulov (both EUR).

This is what occurred in 2009. While the central government’s current obligations toward the PIO amounted to KM 181 million, the government transferred only half of that amount, prompting the PIO to run down its reserve fund to meet these obligations toward ultimate beneficiaries. 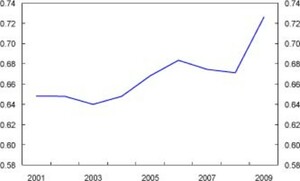 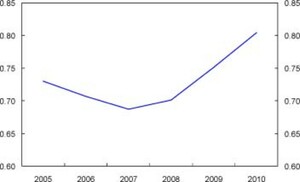