3. The need for fiscal adjustment has stirred up public debate about the most appropriate course ahead. A medium-term consolidation strategy, published in July 2009, established a baseline plan.1 However, both the pace of fiscal consolidation (which is programmed to be in line with experience in other Nordic countries) and the composition of the adjustment remain under close scrutiny. Considerations affecting the choice of a fiscal adjustment mix include the desire to maintain the Nordic-type welfare state and to balance the need for public debt reductions against the need to support the economic recovery.

4. This paper sheds light on the macroeconomic effects of different fiscal adjustment options. We use the Global Integrated Monetary and Fiscal Framework (GIMF), calibrated to Iceland, to model fiscal consolidation under different scenarios for expenditure and revenue adjustment. The model suggests that an expenditure-oriented fiscal adjustment, especially if associated with reductions in transfers, would be modestly less detrimental to growth than a tax-based adjustment. If a more revenue-oriented consolidation is selected, a mix including a VAT increase would give room for a more export-oriented growth. As for the overall pace of fiscal consolidation, the pace now planned will protect the downward path of public debt from leveling off due to external shocks or realized contingent liabilities.

5. The medium-term fiscal consolidation plan that the authorities presented to Parliament in July 2009 is appropriately ambitious. It aims to achieve: (i) a primary central government surplus by 2011; (ii) an overall central government surplus by 2013; and (iii) public debt of 60 percent in the long run. It also commits to a balanced use of revenue and expenditure measures, and a separate understanding reached with social partners suggest that revenue measures should amount to 45 percent of the needed adjustment. Creating conditions for stronger economic activity is an overarching theme of the plan. Finally, the authorities are committed to maintaining quality welfare services, including by protecting healthcare, social services, and public education.

6. Potential areas for expenditure rationalization have been identified in OECD reports, and the authorities have advanced in their implementation:2 The OECD has pointed to health care and education as areas where public spending is high by OECD and Nordic standards and cost-cutting could be implemented (Table 1).

9. The macroeconomic implications of the size and mix of fiscal adjustment can be considered using the IMF’s Global Integrated Monetary and Fiscal Model (the GIMF). The GIMF is a calibrated model commonly used to assess the implications of fiscal measures on the real economy.1 The main advantage of this analysis is the granularity with which different fiscal policy instruments can be examined compared to analysis based on empirical estimations. This allows realistic fiscal policy scenarios to be modeled.

10. The GIMF model contains three channels through which fiscal adjustment affects the economy:

11. The model for Iceland is calibrated to produce a steady state similar to the present economic structure, and to generate reasonable dynamic responses to shocks:

Government primary expenditures: The national accounts definition is used; thus, government consumption and investment are included, but not transfers to consumers.

Government primary revenues. To simplify the modeling these are taken to include interest revenues.

12. The steady state model is simulated forward to establish a baseline against which to investigate alternative scenarios. Key assumptions underlying this baseline include:

14. Model simulations suggest that an expenditure-oriented adjustment would have a modestly less negative impact on aggregate demand than a revenue-oriented one (Figure 2):

Sensitivity to the fiscal adjustment mix

16. Model simulations suggest that for expenditure-oriented adjustments a greater emphasis on transfer cuts modestly boosts output. If 75 percent of the expenditure measures involve transfer cuts, cumulative GDP growth is more than ¾ percentage points higher than under the baseline by 2014, tripling the impact of scenario 1, and 1 percentage point higher than under a consolidation with a greater cut of consumption spending. The intuition is that government investment and consumption impact aggregate demand directly, while reduction in transfers operate mainly through their effects on personal disposable incomes, with is widely accepted in the literature to have smaller multipliers. (Figure 4). The overall inflation rate and the debt reduction path remain similar under all expenditure-oriented scenarios, although the better growth under a consolidation with greater transfer cuts reduces the debt ratio by an additional percentage point to a consolidation with greater cut in government consumption (Figure 5).

17. Revenue-oriented scenarios keep GDP subdued, with some nuances. All scenarios which more heavily tax consumption reduce consumption by at least 0.8 percent of GDP by 2015 and tend to discourage investment (Figure 6). Under consolidation using only consumption taxes instead of income taxes, this effect is amplified by a higher inflation rate (1¼ percentage points in 2011-15) and the associated higher real interest rate due to the response of monetary policy (Figure 7). While consumption taxes allow the trade balance to improve, it is not sufficient to offset the decline in domestic demand: by 2014 consolidations relying on consumption taxes generate lower cumulative GDP growth than alternative revenue-based scenarios. Nonetheless, a fiscal adjustment plan that raises consumption tax revenues generates fewer distortions and redirects the economy toward export-led growth, and after 2015 cumulative GDP is higher than under consolidations relying on taxes on factor inputs. The debt ratio follows a similar path under all revenue-oriented scenarios, although an adjustment that relies exclusively on consumption tax revenues leads to a slightly higher debt ratio (by ¾ percent of GDP) in 2015.

18. Model simulations suggest that small variations in the total amount of fiscal adjustment have no major impact. An adjustment in the primary balance that is about ½ percentage point lower than in the baseline would be less restraining on consumption despite inducing a trade balance deterioration (Figure 8), and allows GDP to temporarily stay slightly above the baseline (Figure 9).5

19. However, the pace of fiscal adjustment is of more importance. A delayed consolidation—assuming a primary balance 2 percentage points lower in 2011 offset by later surpluses—worsens borrowing conditions for the private sector by keeping pressure on the inflation rate and putting growing pressure on interest rates. It also leads to real appreciation in 2011-15 and deterioration of the trade balance. Private investment and aggregate demand are relatively subdued throughout the coming decade under delayed consolidation, and cumulative GDP growth is about 1 percent lower by 2014.

21. How robust are results on the pace of adjustment to underlying assumptions? Two scenarios are considered. First, a higher risk premium, perhaps due to premature or missequenced capital control liberalization (a model-based estimation6 suggests that under normal market conditions and given Iceland’s public debt level, Iceland’s long-term government bond yields would be about 200 basis points higher than observed). Second, materializing contingent liabilities (commercial bank losses may call for a new round of bank recapitalization, amounting to as much as 10 percent of GDP, and separately litigation risks remain) would increase public debt.

22. Model simulations suggest that results are sensitive to the behavior of the risk premium on Iceland’s debt. A 200-basis point increase in the foreign currency premium in 2011 slows down growth and slows the reduction of public debt (Table 3 and Figure 11). The initial real effective exchange rate depreciation—which could give a cumulative boost to growth by about ¾ percentage points in 2011-15—wears off in the long-run, while the inflation rate remains elevated for most of the decade. The rise in the foreign currency risk premium burdens the government with additional interest payments of more than 1½ percent of GDP by 2013, which in combination with the sharply declining GDP growth, levels off the long-term public debt path. In sum, an increase in the foreign currency premium would keep the 2020 public debt level more than 15 percent of GDP higher than under the main scenarios if the fiscal consolidation is delayed. This points to a need to carefully coordinate the fiscal adjustment path with the capital control liberalization path.

23. Results are also sensitive to public debt shocks. A 10 percent of GDP shock to public debt increases the real interest rate and amplifies the effect of the private sector’s net worth reduction in 2011, subsequently reducing investment. The shock also triggers further fiscal consolidation through reduction in household transfers, amplifying the negative GDP growth effect on the debt path.

24. The simulations suggest that a debt shock will delay achieving the authorities’ objective of maintaining debt to GDP ratio of 60 percent. This is particularly the case for delayed consolidation, and the total impact on public debt 15 percent of GDP higher than if contingent liabilities were not assumed by the government. In sum, given a targeted path of debt reduction, variations in the fiscal adjustment path should only be considered once there is greater clarity about contingent fiscal liabilities.

25. GIMF simulations underscore that the depth, composition and timing of the fiscal adjustment have macroeconomic consequences. Domestic demand and growth would be modestly stronger under an expenditure-oriented adjustment than under a revenue-oriented one. The small differences resulting from fiscal adjustment options with different compositions show that the authorities’ aspiration to reduce the ratio of long-term debt to GDP to 60 percent can be achieved with any policy mix. However, attention must be paid to the pace of consolidation: delay could stall debt reduction at above 75 percent of GDP. Finally, the pace of adjustment provides protection against debt shocks and an increase in the foreign currency risk premium, opening up greater room for other policies (e.g. capital control liberalization).

See Danielsson et al. 2009 for details of the QMM.

A similar ratio of liquidity constraint consumers has been used in the case of upper income emerging European economies, see Allard and Muñoz (2008) and Allard et al. (2008)

The higher inflation would be particularly undesirable, given the large share of CPI- indexed loans, which constituted 19 percent of Icelandic banks’ loan portfolios at end-April 2010.

A smaller consolidation may also trigger a negative confidence effect, particularly if it involves a deviation from the previously announced path. A possibly non-linear effect of such a scenario on risk premium is difficult to model.

IMF staff calculations, based on a fixed effects panel data estimation, which covers 17 countries and the period from 1998-2008, without accounting for capital controls. According to this estimation Iceland’s projected 10-year government bond yield would average 9.8 percent of GDP compared to an IFS reported average of 7.6 percent.

Fiscal Consequences of the 2008 Crisis

Effect of the Fiscal Adjustment Mix on Growth and Inflation 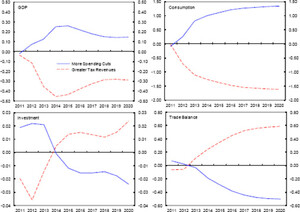 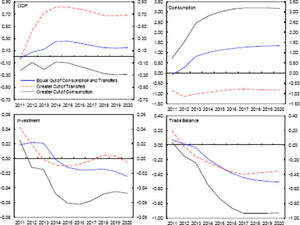 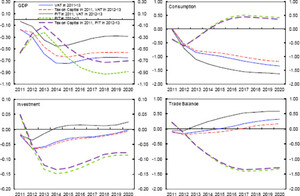 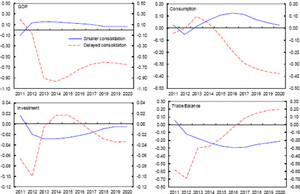 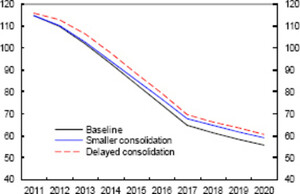 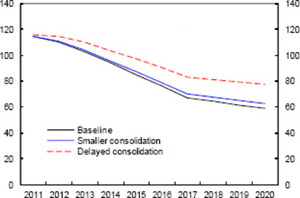 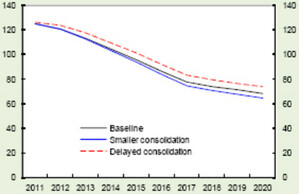