II. Commodity Prices, Growth and the Fiscal Position in Uruguay1

1. Commodity prices are an important external factor for growth and fiscal performance in a small open economy like Uruguay’s. When agricultural commodity prices rise, Uruguay stands to gain with stronger external current account balances, output growth, and fiscal positions. However, when oil prices rise in tandem, as a net oil importer, Uruguay’s terms of trade deteriorate, as may growth and the fiscal position. Moreover to the extent that the economy is dependent on commodities, volatility in their prices introduces uncertainty for the growth and fiscal outlook.

3.The impact of commodity prices on Uruguay’s fiscal performance is more difficult to delineate. Large commodity exporters in the region (Argentina, Brazil, Chile and Peru) have experienced a boost in tax revenues during the recent run-up in prices, which in some cases has fueled an increase in government spending (IMF, April 2009). In the case of Uruguay, the government does not rely directly on revenues from commodity exports, and any revenue windfalls deriving from commodities accrue indirectly through higher incomes. Moreover, lagged and often times incomplete tariff adjustments to oil price increases have carried significant fiscal costs. Historically, periods of strong revenue performance have coincided with high growth in both, real GDP and commodity prices, while periods of poor revenue performance have also coincided with low real GDP growth and commodity prices. However, the links between expenditures, growth and commodity prices are less evident.

4.The most recent run-up in global commodity prices appears to have had a mixed impact on the Uruguayan economy. On one hand, higher commodity prices boosted the economic fortunes of Uruguayan exporters and raised incomes. Over 50 percent of Uruguayan exports during 2006-2008 comprised primary commodity exports (see Table A1), and on average international prices of these same primary commodities rose by roughly 90 percent over the same period. 2 The share of exports in real GDP growth rose steadily with the commodity price boom. Moreover, with its strong economic links to Argentina (and to a lesser extent Brazil), the Uruguayan economy stood to benefit indirectly from the positive impact of the commodity price boom on output in those countries. However, the oil import bill rose too, with total imports more than offsetting the increase in exports.

5. This paper quantifies the overall extent to which Uruguay is affected by commodity price movements. It does this by focusing on two main issues: (1) the overall effect of commodity prices on growth and the fiscal position; and (2) the importance of indirect channels of transmission of commodity price shocks, particularly through neighboring countries. The paper employs both a standard VAR methodology as well as a Bayesian VAR to assess commodity prices changes (and the corresponding impact on Uruguay specific terms of trade) on the government sector (primary fiscal balances) and on households (gross domestic product and income).

6. we find that commodity price shocks have a significant effect on growth and fiscal indicators, with intermediate channels of transmission via Argentina playing a key role. In general, the models yield the following results:

B. Commodity Prices, Terms of Trade and the Macroeconomy

7. The impact of simultaneous increases in oil and food commodity prices is difficult to disentangle. Changes in the terms of trade do not directly affect the level of real output, but influence real purchasing power, both through nominal incomes and through their effect on domestic prices. The indirect effects of changes in the terms of trade on real output in turn depend on the impact of these changes on spending. Moreover, domestic activity and income receives an additional boost from the indirect impact of commodity prices shocks on neighboring country GDP, Argentina and Brazil in the case of Uruguay, particularly when economic links between the countries are strong.

8. Higher commodity prices have a potential impact on both government spending and revenues. On the expenditure side, to mitigate the negative impact of higher food prices, the government implemented a range of subsidies in 2008 roughly equivalent to 2 percent of GDP. At the same time, the impact on revenues has been mixed. On one hand, higher oil commodity prices have had an adverse effect on fiscal performance, eating into the operating surpluses of two key public enterprises, the state fuel company (ANCAP) and the electricity generation company (UTE). On the other hand, it is plausible that the government sector would have captured rents due to higher commodity prices, directly through taxes on income and profits of enterprises, as well as indirectly through taxes on household incomes. While the government could save a large portion of buoyant revenues, it could also use revenue windfalls to finance growing government spending. The latter appears to have been the case in Uruguay with real expenditures growing faster than real revenues in recent years.

10. Moreover, the strong relationship between commodity prices and growth and revenues is specific to some commodities, but not others (Figure A1). Real GDP growth appears to have a strong positive correlation with prices of soybeans, wood and wheat, but a weaker (still positive) correlation with rice, beef and leather for example. Revenues appear to correlate strongly with prices of beef and soybeans, but not rice, wood or wheat prices.

13. Impulse response functions derived from the VAR estimations indicate how growth, revenues and expenditures have responded to commodity price shocks. These responses take into consideration not only the direct impact of the shocks, but also their indirect impact through their feedback on real GDP growth, the endogenous variable. We impose strict exogeneity conditions on commodity prices as they are assumed not to be affected by domestic conditions in Uruguay. A Cholesky factorization is used with the following ordering: domestic economic growth; and real revenues (real expenditures).

14. The results confirm the positive impact of commodity price shocks on growth, but a more mixed impact on revenues. Commodity price shocks initially lower growth (at t=0), likely reflecting the immediate adverse impact of oil price shocks on the current account balance. However, within the first two quarters, growth increases and the impulse response becomes positive before eventually dying out after roughly 10 quarters. The impact of shocks on revenues is initially negative, again reflecting the adverse impact of oil price shocks on public enterprises and implied revenues of the non-financial public sector. Despite becoming less negative in the subsequent two quarters, the impulse response never turns positive—all in all, the negative impact of oil shocks appears to outweigh any potential benefits for higher revenues from higher export prices.

17. These results bear a striking difference when compared to results from the large net commodity exporters of Latin America. A recent study by Medina (August 2009) analyzes the impact of commodity prices on the fiscal positions of a set of countries, including the main commodity exporters in Latin America (Argentina, Brazil, Chile, Colombia, Ecuador, Mexico, Peru and Venezuela). The paper finds heterogeneity in the response of revenues and expenditures to commodity price shocks, attributing this varied behavior in part to the diversity in fiscal institutional frameworks across these countries. Nonetheless, the response to commodity price shocks in these countries is broadly similar when compared to a net commodity importer such as Uruguay. Our findings for Uruguay compare as follows:

18. In order to take better account of a full set of external shocks to Uruguayan growth and the fiscal position, we next estimate a Bayesian VAR.4 This methodology is in the same vein as Adler and Mansilla (2008) and Abrego and Par Osterholm (2008) who analyze the impact of external shocks on Uruguayan and Colombian growth, respectively. We adapt the model to examine the impact of commodity price shocks on growth and on fiscal variables, taking into account, in addition to fuel and non-fuel commodity prices, growth in Argentina and Brazil (an important conduit of commodity price shocks to Uruguayan growth and hence fiscal performance) and global financial conditions. The basic specification of the empirical model is based on the following set of variables:

19. The model is estimated using quarterly data for the period 1994Q1-2009Q1. The steady state priors are based both on recent history and the author’s assumptions about plausible medium term ranges. The priors assume potential growth in Uruguay of a median of 3.5 percent (which is higher than the historical potential), mainly reflecting the wave of investment growth from 2006-2008. Growth in Argentina and Brazil is assumed to remain at levels in the sample period (3 percent median, respectively). The prior distribution of the EMBILA (centered at 400bps) reflects likely higher risk aversion towards the region than in the last few years, while the prior distribution for the change in commodity prices is centered on 0 percent (no change over the medium term).

20. The model yields plausible results and confirms the findings of the earlier simple VAR estimations.6 The basic specification confirms the importance of key external factors for growth and the primary fiscal balance. For example, a one standard deviation shock in the exogenous variables (expressed in each variable’s units) would cause the following effects on Uruguay’s GDP growth and primary balance (Figure 1):

21. Commodity prices are important for growth and the fiscal position. Econometric estimates suggest that Uruguayan growth is sensitive to movements in commodity prices and even as a net commodity importer, the effects on growth are positive. Moreover, Uruguay’s strong economic links to the region provide an indirect channel through which commodity price shocks feed into Uruguayan growth, considering the positive impact of commodities on neighboring country growth. However, given the structure of fiscal revenues in Uruguay, any boost to revenues (from higher agricultural commodity prices) is indirect through higher growth, and easily wiped out by the negative impact of oil shocks on public enterprises. Moreover, commodity price shocks appear to raise expenditures (on subsidies for example), thus resulting in a deterioration of the primary balance.

Based on data from WITS (World Integrated Trading System).

Generalized commodity price indices e.g.,. the IMF commodity price index is weighted in favor of advanced economies’ trade, while the World Bank index is weighted toward developing economies’ trade—and hence may not provide the most accurate representation of trade weights for Uruguay. Uruguay specific terms of trade indices are not available for a sufficiently long period of time—the central bank’s index has been discontinued.

This methodology allows for the specification of informative steady-state priors for the variables used in the model, which reduces the problem of degrees of freedom arising from the generous parameterization associated with conventional VAR models, and improves forecasting performance. Interpreting the impulse response functions (which allow for imposing block exogeneity) is sufficient for the narrow purposes of this paper and we leave the discussion of the forecasts for a forthcoming working paper.

We estimate several alternative specifications and report the results based on the general commodity price index (as opposed to the Uruguay specific index), as well as the separate impact of non oil commodity price shocks, and the impact on revenues and expenditures.

One standard deviation shock is roughly equivalent to a 17 percentage point increase in commodity prices.

This result is corroborated in the companion selected issues paper “The Influence of “Big Brother:” Does Uruguay Face Two Rests of the World? 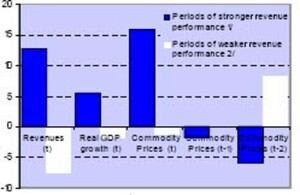 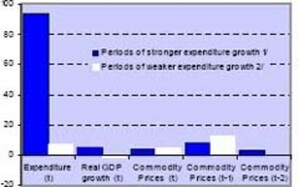 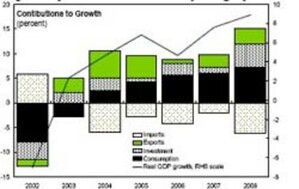 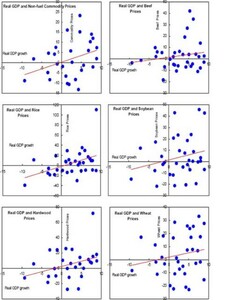 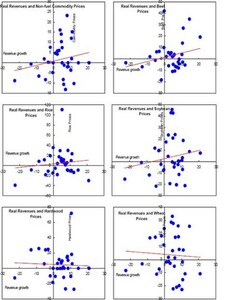 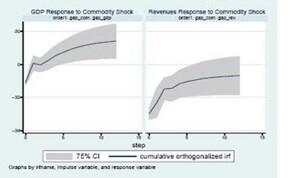 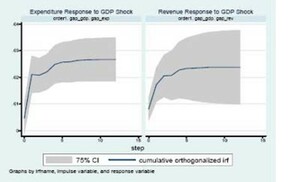 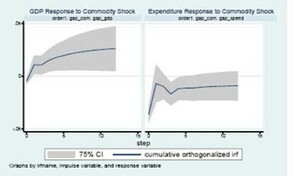 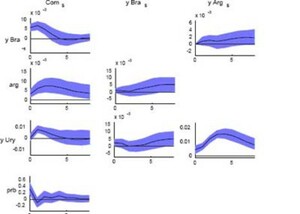 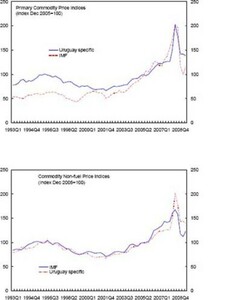 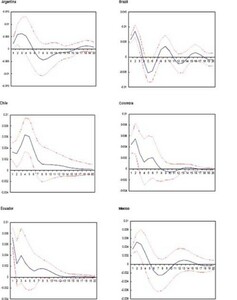 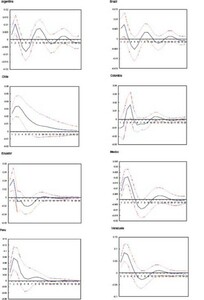 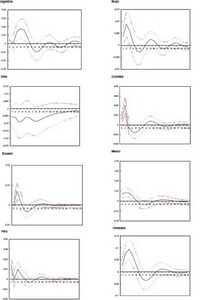