This Selected Issues paper evaluates the size of fiscal multipliers in Korea using the IMF’s Global Integrated Monetary and Fiscal model calibrated for Korea. The sensitivity of the results to a number of key factors is explored. Based on this, the impact of the recent fiscal stimulus packages is estimated and the appropriateness of the current mix of measures is assessed. In this context, the paper also draws on international operational experience with fiscal stimulus measures.

This Selected Issues paper evaluates the size of fiscal multipliers in Korea using the IMF’s Global Integrated Monetary and Fiscal model calibrated for Korea. The sensitivity of the results to a number of key factors is explored. Based on this, the impact of the recent fiscal stimulus packages is estimated and the appropriateness of the current mix of measures is assessed. In this context, the paper also draws on international operational experience with fiscal stimulus measures.

I. Counter-Cyclical Fiscal Policy—Does It Work In Korea’s Open Economy?1

1. The spillovers from the ongoing global financial turmoil and economic downturn have triggered fiscal policy responses in a number of countries. This has reignited the long-standing debate among economists about the ability of fiscal policy to help stabilize economic cycles.

2. Supporters of an active role for fiscal policy suggest that economies lack an efficient mechanism to return to full potential. Critics, on the other hand, argue that economic agents will offset the impact of fiscal policy on aggregate demand through changes in their saving behavior (so-called Ricardian equivalence). A middle-of-the-road view holds that fiscal policy can be effective provided certain conditions hold, including sound macroeconomic fundamentals, nominal wage and price stickiness, and/or economic agents with finite horizons and liquidity constraints.

3. The paper will evaluate the size of fiscal multipliers in Korea using the IMF’s Global Integrated Monetary and Fiscal (GIMF) model calibrated for Korea.2 The sensitivity of the results to a number of key factors is also explored. Based on this, the impact of the recent fiscal stimulus packages is estimated and the appropriateness of the current mix of measures is assessed. In this context, the paper also draws on international operational experience with fiscal stimulus measures.

4. The paper is organized as follows: Section B discusses cross-country studies on the effectiveness of counter-cyclical fiscal policy; Section C will briefly introduce the macroeconomic model used and present simulation results for Korea; Section D discusses the role for counter-cyclical fiscal policy in the current downturn; and Section E concludes.

B. Cross-Country Evidence on the Counter-Cyclical Role of Fiscal Policy

5. The question of the effectiveness of fiscal policy is ultimately empirical. There is a vast literature on this topic. Studies generally support the role for counter-cyclical measures, but evidence on the size of fiscal multipliers varies with the analytical approach:

Generally, the cross-country evidence suggests that the success of fiscal policy is contingent on a number of factors. First, the fiscal response needs to be well timed. This will, in particular, reinforce the effectiveness of fiscal policy in countries with short implementation lags and/or large automatic stabilizers. Second, strong fundamentals, including macroeconomic stability and fiscal sustainability, will strengthen multiplier effects by lowering any possible offsets from precautionary savings. Finally, fiscal measures need to be well targeted to ensure the largest possible demand impact.

C. The Counter-Cyclical Role of Fiscal Policy in Korea

6. This section will assess the effectiveness of counter-cyclical fiscal policy in Korea based on simulations using a multi-country macroeconomic model. Specifically, fiscal multipliers for different revenue and expenditure measures are estimated and their sensitivity to underlying assumptions is explored. Moreover, the complementary role of monetary policy and benefits of coordinated global fiscal stimulus are also analyzed.

7. Using a macroeconomic model has the advantage that the results are underpinned by economic theory, although the results are still sensitive to the imposed restrictions and assumptions. For the purpose of this paper, the IMF’s Global Integrated Monetary and Fiscal (GIMF) model is used.

8. GIMF is an open economy general equilibrium model based on household and firm optimizing behavior in a multi-country setting. It was developed at the IMF and is documented in Kumhof and Laxton (2007). It integrates domestic supply, demand, trade, and international asset markets in a single theoretical framework. This allows for a rich set of transmission mechanisms. Households are assumed to have finite planning horizons and some are liquidity constrained. Together with other assumptions, this allows for non-Richardian effects of fiscal policy. Firms are managed in accordance with the preferences of their owners, the myopic overlapping generation households. Therefore, they also have finite planning horizons. A fiscal policy reaction function is applied and the government is assumed to target a balanced structural budget. Monetary policy is in the new-Keynesian tradition, with a number of nominal and real rigidities that allow for real effects on the economy in the short to medium run. Moreover, monetary policy is guided by a stylized Taylor-type interest rate reaction function.

9. The model is calibrated for two countries, Korea and the rest of the world, and is on an annual basis. The model is calibrated to reflect different features of the Korean economy and policy preferences, including (i) demand and supply side characteristics; (ii) trade structure; (iii) external position and composition of fiscal revenues and expenditures; (iv) fiscal and monetary reaction functions; and, finally, (v) structural parameters for household preferences and firm technology. Much of the input used for the model calibration draws on N’Diaye, Zhang, and Zhang (2008), Kumhof and Laxton (2007), and author estimates and assumptions.

10. A number of stimulus measures and sensitivity analyses are simulated to derive fiscal multipliers. These simulations are stylized representations of reality and do not consider some of the practical constraints that policy makers may face, including the lag structure of infrastructure investment projects and political bargaining about measures. Nevertheless, they do give a good sense of the potential growth impact of different fiscal measures, allowing for an assessment of relative effectiveness and overall impact of announced fiscal packages. Moreover, sensitivity analysis can shed light on some of the uncertainties and trade-offs that policymakers will need to consider when designing fiscal stimulus packages.

11. The simulations focus on both revenue and expenditure measures. On the revenue side, multipliers for temporary and permanent corporate income, personal income, and indirect taxes are derived. On the expenditure side, the growth impact of hikes in public investment, consumption, and transfers is considered. In each case, the fiscal stimulus is assumed at 1 percent of GDP for one year, except for the permanent cuts in corporate and personal income tax rates. To allow for an assessment of the pure discretionary impact on growth, lump-sum transfers are used to offset the impact of automatic stabilizers. In addition, in the period following the fiscal stimulus, lump-sum transfers adjust gradually to return government debt back to its steady-state value over time. The results are presented below and in Figure I.2:

12. The multipliers for Korea are generally smaller compared to the rest of the world. This, to a large extent, reflects the more open nature of the Korean economy and, consequently, leakages through the trade channel. However, in the event of a simultaneous stimulus in the rest of the world, the multipliers for Korea increase significantly as the fiscal stimulus abroad translates into increased Korean exports of consumption and investment goods (Figure I.2). In turn, this demonstrates the importance of coordinating counter-cyclical policy in an increasingly interconnected global economy.

14. Korea has taken decisive steps to counter the fallout on the economy from the global economic slump. The government introduced two fiscal packages in 2009, with the original budget and the supplementary budget, totaling 3.6 percent of GDP:

Reflecting this, the overall fiscal balance is expected to switch to a deficit of around 3 percent of GDP in 2009 and the discretionary fiscal impulse (measured as the change in the structural fiscal balance) is estimated at 2¾ percent of GDP, which is high by G-20 and Asian standards. The change in the structural balance is smaller than the size of the announced fiscal stimulus packages. This partly reflects the fact that the automatic transfers from central to local governments tied to tax collections were expected to decline in 2009 due to the slowdown and, therefore, were replaced by increased lending to local governments. The increased lending can be considered as discretionary spending and was, consequently, part of the announced fiscal stimulus packages. However, it does not effectively represent additional spending compared to the spending envelope of 2008, but rather a switch between central government spending categories.

15. The results from the GIMF simulations clearly show that fiscal policy in Korea can be effective as a counter-cyclical tool. This supports the authorities’ decision to rely heavily on fiscal policy as a key line of defense against the adverse economic spillovers from the global economic and financial turmoil. Moreover, Korea’s relatively favorable fiscal position provides the authorities ample room to loosen fiscal policy during this downturn.

16. Given Korea’s relatively small automatic stabilizers and the magnitude of the slowdown, a counter-cyclical response had to rely on discretionary measures.3 However, Korea benefits from relatively short fiscal implementation lags, which have allowed for a fast discretionary response to the weakening economic conditions. This was evident from the positive impetus to GDP growth from public consumption and construction investment during the first quarter of this year.

17. The authorities’ fiscal response has also fulfilled many of the prerequisites for effective discretionary policy. The fiscal stimulus was timely and it was significant in size, which was crucial given both the depth of the slowdown and considerable uncertainty surrounding the outlook. However, given the introduction of permanent tax cuts, the objective of keeping stimulus temporary was not fully achieved. In light of the protracted nature of the slowdown, the fiscal stimulus will likely have to be prolonged, so it will be important for the authorities to stand ready to do introduce more temporary measures if needed in 2010. It is also important that they clearly signal the readiness to do more to help allay uncertainties about the outlook, thereby lessening precautionary saving motives of corporates and households.

18. While there is no “magic formula” for the right mix of fiscal stimulus measures, the GIMF simulations and international operational experience suggest a number of general lessons:

In light of this, the mix of the fiscal stimulus measures introduced in Korea in response to the current economic crisis has been broadly appropriate. The stimulus focused mostly on spending measures, including spending with a potential large near-term impact on growth, such as investment spending and transfers to liquidity constrained agents. However, the corporate and personal income tax cuts are not expected to have a large impact on growth in the short term, although they can help support the recovery once it is under way. Assuming that the change in the structural fiscal balance represents the same relative mix of measures announced in the fiscal packages, the model-generated multipliers suggest that the impact on growth in 2009 could be around 1–1½ percentage points. Nevertheless, it should be kept in mind that this assumes that the fiscal measures are fully implemented this year, with transfers in the hands of consumers, capital projects carried out, and so on.

19. The analysis in this paper shows that fiscal policy can be effective as a stabilization tool for Korea, despite the openness of the economy. Simulations using a macroeconomic model calibrated for Korea point to a number of key lessons:

I would like to thank Dirk Muir for his invaluable help explaining the workings of the GIMF model.

Korea does not have a comprehensive unemployment benefit scheme and corporate taxes are assessed on previous year’s income.

Korea: Cumulative Fiscal Multipliers in the Base Case

(Impact on real GDP from 1 percent of GDP stimulus in year 1, unless otherwise specified) 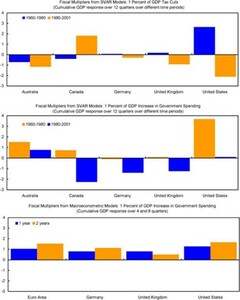 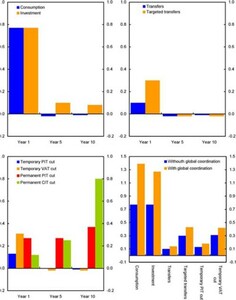 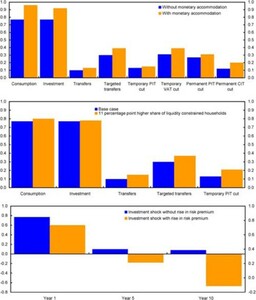 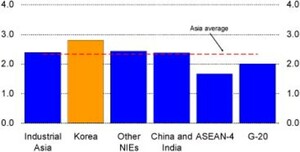