This paper assesses the potential impact of different types of external shocks on the Uruguayan economy, using a Bayesian VAR approach that combines historical data with authors’ informed beliefs. The results show that Uruguay is still sensitive to the financial conditions and economic performance of countries in the region, and somewhat vulnerable to a worsening of global financial conditions, mainly through the potential impact of mature market interest rates. Mild scenarios of deteriorating external conditions would have limited impact on Uruguay’s economic performance, possibly reflecting recent improvements in export diversification, some decoupling from neighboring countries, and important advances in debt sustainability and structural reforms. However, as a commodity exporter small open economy, Uruguay remains vulnerable to a pronounced global downturn.

1. Following a period of high price and output volatility early in this decade—largely explained by external developments—Uruguay’s vulnerability to external shocks has decreased significantly in recent years. This has been the result of sound macroeconomic policies and a benign external environment that has allowed the authorities to build buffers against external shocks and implement significant structural reforms. However, as a small open economy with close links to neighboring countries and the world, Uruguay could still be affected by the changing global environment.

2. To assess the potential impact of external shocks on the Uruguayan economy, a Bayesian VAR model is estimated. The methodology allows to combine historical data with authors’ prior knowledge on plausible paths for the relevant variables over the medium term, thus improving the forecasting properties of the model (relative to a standard VAR). It also allows to capture both the direct and indirect effects of certain external shocks (e.g., the direct effect of a terms-of-trade shock on Uruguay and its indirect effect through the economic performance of trading partners that share a similar export structure). The estimated model is used to forecast Uruguay’s GDP growth for a baseline scenario as well as alternative scenarios with predetermined paths for certain external variables (conditional forecasts).

3. The paper focuses on three types of external shocks that could affect Uruguay through trade and financial channels: (i) economic performance in trading partners (a measure of demand for Uruguayan exports); (ii) global financial conditions; and (iii) terms of trade. Specifically, the basic specification of the empirical model is based on the following vector of variables:

4. The model is estimated using quarterly data for the period 1994-2007 within a Bayesian VAR approach.2 All variables are expressed in percent changes with respect to the same period in the previous year, except for EMBILA and iUS, which are taken in levels. The steady state priors are based both on recent history as well as authors’ beliefs on plausible ranges for the medium-term. The priors assume higher than historical potential growth in Uruguay (3.5 percent median) mainly reflecting the recent wave of investment; partners’ growth (at about 3 percent median) is in line with average levels in the sample, and interest rates in mature markets are assumed to return to the levels observed in 2005-06. The prior distribution of the EMBILA (centered at 400bps) reflects likely higher risk aversion towards the region than in the last few years, while the prior distribution for the change in terms of trade is centered on cero (no change over the medium term).

5. The model yields very sensible results.3 The basic specification confirms the relevance of external factors and with the expected signs. For example, a one standard deviation shock in the exogenous variables (expressed in each variable’s units) would cause the following effects on Uruguay’s GDP growth (Figure 1):

6. These results seem to validate the hypothesis that external factors play a significant role on the economic performance of the country, explaining about ¼ of the historical variance of GDP growth. Moreover, the regression yields a fairly good fit.

7. On the basis of the basic model estimation, the Bayesian VAR method allows to make forecast scenarios based on predetermined paths for a subset of variables, testing the sensitivity of growth to simulated stress situations. An unconditional forecast (in the absence of shocks) suggests that Uruguay would continue to growth strongly, at about 7¼ percent in 2008 and slowing down to 6 percent by 2010 (Figure 2). This would be supported by continuously strong growth in trading partners (near 4 percent on average) and relatively low EMBILA spreads (about 320 bps on average).

8. Asymmetric commodity price shock scenario (Figure 3.A). Uruguay seems less vulnerable to a sharp and widespread fall in commodity prices than other EMEs in the region. This is because the impact of lower agricultural prices would be offset by lower oil prices (Uruguay is a net oil importer). However, an asymmetric shock—with a more pronounced fall in agriculture prices—could have an important impact on Uruguay directly through its ToT and indirectly through the effect on regional trading partners with a similar export structure. In this respect, the model suggests that, a 7 percent average fall in ToT and a 1.6 percent lower growth in trading partners (relative to the benchmark) would reduce GDP growth by 2.5 percent towards 2010.

9. Financial shock (Figure 3.B). This scenario explores the effect of a shift in economic conditions in developed markets and a change in the risk appetite of global investors that raises debt spreads for emerging markets. In this case, the model points to a significant impact on growth, possibly derived from a tightening of monetary policy in developed economies. 5 In particular, a 100bps higher US interest rate and a 250bps EMBILA spread increase (relative to benchmark) over the medium term would reduce Uruguay’s GDP growth by about 2¼ percentage points by 2010.

10. Regional slowdown (Figure 3.C). Finally, in an environment of regional slowdown, for example leading to 1.6 percent lower growth in Uruguay’s trading partners and coupled with higher risk aversion towards emerging markets—resulting in a hike of the EMBILA spread to about 600bps—Uruguay’s GDP growth would slowdown by some 2 percentage points by 2010 (relative to benchmark).

11. While Uruguay has significantly reduced its vulnerability to external shocks—on account of sound macroeconomic policies, the build up of buffers against external shocks, some decoupling from neighboring countries and significant structural reforms in recent years—as a small open economy it is still exposed to regional and global shocks. In particular, econometric estimates suggest that Uruguay is still sensitive to the financial conditions and economic performance of countries in the region, and to a worsening of global financial conditions, mainly through the potential impact of mature market interest rates. While mild scenarios of worsening global conditions would have limited impact on Uruguay’s economic performance, a pronounced global economic downturn could have significant impact on Uruguay, particularly through its effect on commodity prices and the economic conditions of key trading partners.

A Matlab facility developed by M. Villani is used to estimate the model. For a description of the methodology and similar country applications see Abrego & Osterholm (2008) and Osterholm & Zettelmeyer (2007).

Alternative specifications—including the real effective exchange rate as a control variable or including alternative measures of external financial conditions (like the High Yield bond spread or the VIX index)—were explored but did not improve the results.

The estimates could also be upward biased due to effect of the 2002-03 financial crisis, when Uruguay’s GDP contracted significantly while the EMBILA shot up mainly reflecting Argentina’s sovereign default and the uncertainty associated to the Brazilian presidential election.

An adverse scenario in mature markets where the fight against inflation pushes international interest rates up, could affect Uruguay through an increase in the debt service burden—especially if combined with higher debt spreads to emerging markets—although Uruguay’s debt management has reduced the potential impact of that scenario for the immediate future.

(at 50 and 95 percent confidence levels) 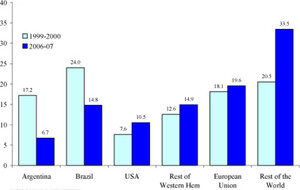 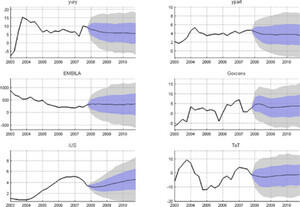 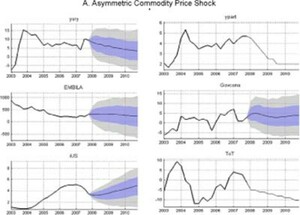 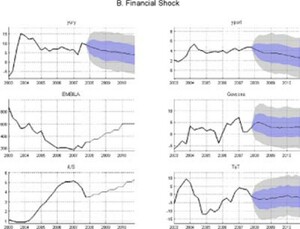 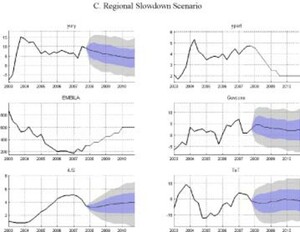