After years of depressed levels, credit growth has accelerated sharply, reaching about 40percent in the 12 months to June 2008. The expansion has been mostly driven by growing consumption and corporate loans, reflecting improved incomes and favorable growth prospects. Financial deepening, however, remains low relative to historical levels and other countries in the region. Credit dollarization remains high, although the currency denomination of loans appears to appropriately match the currency of borrowers’ income. While sustained rapid credit growth could lead to vulnerabilities, the risk of a possible loosening in lending standards appears contained at present by a broadly appropriate prudential framework. Up to August 2008, the turbulence in global financial markets did not seem to affect the credit recovery, partly reflecting Uruguay’s sound banking system. However, more recent prospects of a global slowdown and heightened volatility in global financial markets could halt this recovery.

A. A Brief Historical Perspective

1. After being a regional financial hub, Uruguay’s banking system contracted sharply during the 2002-03 crisis. With investment grade and a large presence of foreign banks, Uruguay was seen as a regional financial center during the 1990s. An over 50 percent credit-to-GDP ratio in 2001 ranked only second after Chile in the region. Non-resident deposits, mostly from Argentines, reached some 40 percent of deposits, and lending activities across borders were important—with loans to non-residents at about 10-12 percent of total loans. However, a massive deposit run—largely explained by a sharp deposit withdrawal by non-residents—led to a 48 percent contraction of deposits from end-2001 to end-2003. Credit to the domestic non-financial private sector also contracted sharply from US$ 10.5 billion (51 percent of GDP) at end-2001 to about US$ 4.0 billion (24 percent of GDP) at end-2004.

2. Domestic credit remained depressed for several years after the crisis. After bottoming at US$ 6.8 billion, in April 2003, deposits started to increase, reaching US$10 billion by end-2006. Despite this recovery in available funding, domestic credit remained largely depressed, hovering around US$ 4.0-4.5 billion during this period. This reflected both demand and supply factors, including stricter prudential regulations, particularly on large public banks, risk-aversion after the crisis and low investment-related demand.2 Tight legal restrictions precluded public banks—particularly Banco Hipotecario Nacional (BHU)—from expanding their credit portfolios, and many private banks focused on a business model built around low domestic deposit (dollar) interest rates and higher low-risk or risk-free returns on foreign assets.

B. The Recent Credit Acceleration

3. Since late 2006, credit growth accelerated significantly (Figure 1). Credit to the non-financial private sector grew by 50 percent in dollar terms (adjusted for exchange rate variations) 3 from end-2006 to June-2008, with much of the hike occurring during the last 12 months (39 percent). In addition, while still small, non-bank financial enterprises (“Administradoras de Credito”) have been expanding their domestic lending quite rapidly.

4. Both structural and cyclical factors are likely to have contributed to the resumption of credit. Particularly important have been: (i) the improvement in the balance sheet of Banco de la Republica Oriental del Uruguay (BROU) and the gradual normalization of its lending activities; (ii) strong deposits inflows; (iii) falling interest rates in the US—and uncertainty over the quality of financial assets in mature markets—that induced a shift in banks’ portfolios away from foreign assets and towards local assets; (iv) improving incomes—reflecting several years of high growth and a recovery of real wages—as well as favorable growth prospects—supported by prudent macroeconomic policies and a booming external environment for Uruguayan exports; and finally (v) improving firms’ balance sheets, that have made them attractive to lenders.4

5. The rapid expansion of credit has been funded mainly with growing deposits.5 Until 2006, a significant share of new available funding was invested in foreign and domestic assets other than credit to the private sector6 (Figure 2). For example, during 2005-06 banks increased domestic credit only by US$0.5 billion, despite receiving US$ 1.3 billion in deposits. Since end-2006, however, banks appear to have shifted their portfolio allocations, extending about US$1.8 billion in domestic credit, out of a US$2.3 billion increase in deposits.

6. From the demand side, credit growth has been mainly driven by consumption and corporate loans (Figure 3). While mortgage and auto loans are the most dynamic segments, with growth rates of over 300 and 100 percent, respectively, their contribution to overall credit growth has been low given their still limited volume. Within corporate credit, loans to tradable-good sectors (agriculture, mining and manufacturing) have grown most markedly, although credit to the service sector has also increased considerably.

7. Financial intermediation in Uruguay remains highly dollarized (Figures 4 and 5). The share of credit denominated on U.S. dollars has fallen from 65 percent of total credit in 2000 to 58 percent in 2008, although mainly explained by activities of public banks. Dollarization in these banks has fallen from 50 percent to 32 percent, while in private banks has remained broadly constant at around 80 percent. That said, dollar loans have been extended mainly to corporate tradable sectors while peso loans mostly to consumers (which generally have incomes in pesos), pointing to an appropriate match between the currency denomination of loans and the borrower’s source of income.7 The service sector seems to be the exception to this pattern, although this sector may include a number of activities closely associated to the tradable sector.

8. Credit to the private sector remains of relatively short maturity, with about 60 percent being of less than 3 years (Figure 6). Moreover, maturities have become slightly shorter between 2005 (before the credit acceleration) and 2008, possibly reflecting the resumption of (short-term) consumption credit. It may also reflect restrictions on maturity mismatches, as deposits continue to be of very short maturity (about 70 percent of deposits remain of less than 30-day maturity).

9. While both private and public banks have expanded their credit operations recently, they have focused on different types of credit (Figure 7). Credit extended by private and public banks—excluding BHU—grew by 41 percent and 36 percent, respectively, from end-2006 to June-2008. However, public banks expanded their lending in local currency, while private banks continued to lend mostly in foreign currency. This difference seems to reflect a segmentation of credit markets, as public banks (BROU) have specialized on consumer loans, while private banks on corporate loans. In terms of funding, public banks seem to have a more cautious approach—still investing a significant share of their newly available funding in foreign assets—than private banks. In addition, the bulk of new nonresident deposits have gone to private banks, and these institutions seem to have channeled such funds towards foreign assets.

10. In addition to rapidly expanding commercial banks, non-bank financial enterprises (“Administradoras de Credito”) are becoming important players in the credit market.8 Currently, with credit stocks of about US$250 million—mostly in the form of (high-interest-rate) consumer loans—they remain small relative to commercial banks, but have been rapidly expanding their portfolios recently. Further, some of these companies are linked to commercial banks in Uruguay, and operate as loan originators, thus pointing to further increases in banks’ credit portfolios going forward.9 They have also been entering the local capital markets, through the issuance of relatively short term paper.

11. Despite the recent acceleration, credit remains low compared to pre-crisis levels. At about US$ 6.2 billion (24 percent of GDP), credit to the non-financial private sector compares low with levels of about 50 percent or GDP prior to 2002. Also, Uruguay’s still low level of credit relative to some neighboring countries is particularly evident if alternative financing channels are taken into account, as other countries in the region (e.g. Brazil, Mexico) have significantly more developed local private capital markets.

13. Key financial soundness indicators remain robust. The rapid acceleration of credit has not been accompanied by a deterioration of financial indicators. In particular, despite its recent expansion, credit to the private sector has remained below 30 percent of total assets, (30-day) liquidity ratios remain high at about 62 percent of short-term liabilities, non-performing loans (NPLs) are very low at about ½ percent, provisions are high as share of NPLs, and capitalization ratios (at about 10 percent of total assets) have remained above the 8 percent requirement. At current levels, even if the economic cycle reverts and non performing loans come back to normal levels, banks provisions are likely remain ample.

14. The evidence points to a healthy revival of credit. At the current juncture, vulnerabilities associated to Uruguay’s rapid credit expansion seems contained. Further, immediate risks point to a possible halt of this recovery, as global financial conditions and growth prospects worsen.

15. Over the medium-term, a sustained rapid expansion could pose a number of challenges:

This paper was prepared by Gustavo Adler and Mario Mansilla.

Growth rates refer to stock of credit to the non-financial private sector, excluding non-performing loans. They also exclude credit extended by “Administradoras de Credito,” as these operate outside the banking system.

The contributions to credit growth are computed as: ΔCredit to PS = ΔDeposits of PS + ΔNon Re sident Deposits–ΔNFA + Δ Equity–ΔOther (domestic) Assets, where PS refers to the (non-financial) private sector and NFA refers to net foreign assets. Figures include valuations effects.

Both net foreign and net domestic assets increased significantly during this period, although the later included large deposits made by banks on the central banks, which were subsequently invested abroad.

These are financial entities that mainly serve to originate consumer loans and micro credits in markets not covered by traditional banks. They are less regulated than banks and generally more cost-efficient.

The recent increase in non-resident deposits has been, arguably, driven by a flight to ‘safety’ triggered by some financial turbulence in Argentina in the first quarter of 2008.

(level and contributions to 12 month growth, at constant exchange rate)

Contribution to change in credit to NF Private Sector

(In price it of GDP)

Credit by Ownership and Currency

(as percent of GDP) 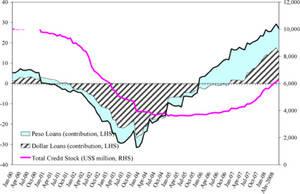 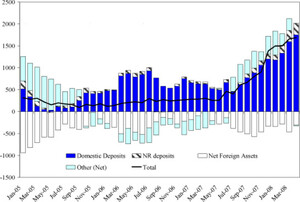 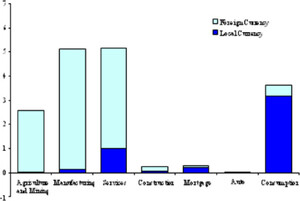 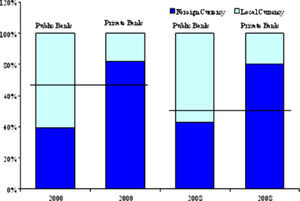 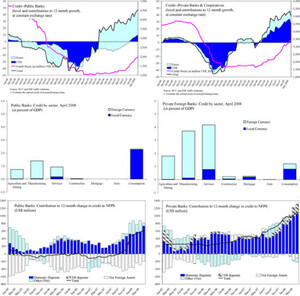 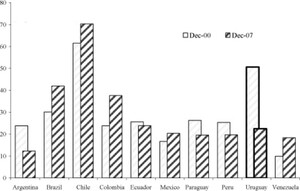