I. Commodity Prices: Their Impact on Inflation in Uruguay1

1. As in many other countries around the world, the recent surge in commodity prices has contributed to pushing up prices in Uruguay. This has coincided with domestic demand pressures associated with strong consumption and investment growth. For policy purposes it is, however, important to be able to disentangle the relative magnitude of these two forces: while domestic overheating clearly requires a contractive policy response, in the case of external price shocks the challenge for monetary policy is to limit second-round effects. In this context, it is necessary to assess the magnitude of such second-round effects.

2. This paper seeks to quantify the importance of international food and oil price inflation for Uruguayan inflation and to draw some international comparisons. We employ both VAR and Phillips-curve estimations techniques to address these questions. Moreover, we carry out similar estimations for a broader set of emerging markets to put the Uruguayan results into an international context. We also examine spillovers from commodity price increases to measures of core inflation.

A. Evidence From Phillips-Curve Estimations

5. As a first way of assessing the impact of commodity prices on domestic inflation dynamics, we estimate an augmented Phillips-curve. Estimating a Phillips-curve allows for assessing the impact of commodity shocks while controlling for other factors such as demand pressures and exchange rate pressures. The approach is similar in spirit as Hooker (2002) and De Gregorio, Landerretche, and Neilson (2008). The estimation uses quarterly data on CPI inflation, with lags of inflation, the unemployment rate gap (as a commonly used proxy of the output gap) and the nominal effective exchange rate as well as changes in the peso price of world fuel and food prices as explanatory variables:

6. Results show a stable impact of food prices on CPI inflation. The fit of the estimation is good; all coefficients have their expected signs and are significant, with the exception of world fuel prices. The coefficient onworld food prices of around 0.05 suggests that a 10 percentage point increase in world food prices is associated with an immediate 0.5 percentage point increase in domestic CPI inflation. The overall importance of world food prices in explaining the variation of total inflation within the sample is, however, small. The pass-through of oil prices has been reported to be low for other developing countries (see, for example, Deutsche Bank, 2008, and Duma, 2008). For a larger set of countries, De Gregorio, Landerretche, and Neilson (2008) find a declining pass-through, which stabilizes at around 0.015.

Note: Dependent variable: headline inflation. Sample covers 1998 Q1-2008 Q1, with 41 observations. Crisis dummy is a dummy which is equal to one during the 2002-03 crisis. Includes quarterly dummies. Reported standard errors are adjusted to correct for heteroskedasticity and serial correlation (Newey-West).
Table 1.

Note: Dependent variable: headline inflation. Sample covers 1998 Q1-2008 Q1, with 41 observations. Crisis dummy is a dummy which is equal to one during the 2002-03 crisis. Includes quarterly dummies. Reported standard errors are adjusted to correct for heteroskedasticity and serial correlation (Newey-West).

7. We also estimate hybrid Phillips-curves with forward- and backward looking expectations, obtaining less stable estimates. To proxy for inflation expectations, we use annual inflation expectations from Consensus Forecasts.2 These expectations are available monthly, but only for end-of-year inflation, and we proxy 12-month ahead expectations by appropriately weighting expected current and next-year inflation for each month. To address the potential problem of endogeneity we estimate the equation with the generalized method of moments (GMM). The coefficient on food prices turns out to be rather unstable, while the one on fuel prices is around 0.01 (a 10 percentage point increase in world fuel prices would be associated with a 0.1 percent rise in headline inflation).

B. Evidence From Vector Autoregressions

8. To assess the impact of external and domestic shocks over time, we estimate a vector autoregressive model (VAR). This method allows to control for factors such as economic activity or exchange rate movements in a dynamic setting when examining the impact of commodity prices on inflation. The approach is similar to several recent studies (see, for example, Blanchard and Gali, 2008, De Gregorio, Landerretcghem and Neilson, 2008, and Deutsche Bank 2007, 2008). We estimate a six variable recursive VAR with quarterly data, covering the period 1996Q1-2008Q2 for nominal prices of fuel and food commodities (in US$ dollars), economic activity, the nominal effective exchange rate, monetary aggregates, and headline, food, fuel and underlying (non food and fuel) consumer prices. Aggregate demand shocks are proxied by the output gap (measured again as deviations of unemployment from its long-term trend). (See appendix for more details).

9. Impulse responses derived from the VAR estimations indicate how inflation has reacted to different types of shocks. These responses take into consideration not only the direct impact of the shocks, but also their indirect impact through their feedback on other endogenous variables. We impose exogeneity conditions on both oil and food prices—these variables are assumed not to be affected by domestic conditions in Uruguay. For the remaining variables, a Cholesky factorization is used, with the following ordering: domestic economic growth; money growth; exchange rate growth; and domestic inflation. To explore spillovers to other prices, we estimate the response of different inflation measures to a shock of 1 percent to three variables: commodity fuel inflation; commodity food inflation; and the output gap.

11. The pass-through of food price inflation is relatively high compared to other emerging markets. We estimated similar VARs for nine other countries; the pass-through for Uruguay is higher than in all but two countries in the sample. Comparing the estimated pass through for Uruguay with those found in other studies (see, for example, Deutsche Bank 2008) also confirms the relatively strong impact on CPI in the Uruguayan case. Possibly, this reflects the relatively rare use of price controls or voluntary price restrictions in Uruguay, as well as the relatively high share of tradable food items in CPI (14.3 percent).

16. Exchange rate shocks also contribute to explaining CPI movements. The initial impact of a currency appreciation on consumer prices is negative, as expected, and remains so for at least a year. By the end of two years, the response is imprecisely estimated. The pass through is quite large in the first year, with a 10 percentage point appreciation lowering headline inflation by about 3.8 percentage points. Hence, the strong rise of Uruguay’s nominal effective exchange rate (17 percent since mid-2007) has helped to buffer the impact of external commodity shocks on domestic inflation.

17. Over a longer time horizon, commodity prices explain only a moderate fraction of the total variation in headline inflation in Uruguay. The variance decomposition allows us to assess how much of the forecast variance in domestic inflation over the estimated period can be attributed to external vs. domestic factors. In the last 10 years, variations in world food and oil prices have contributed only about 15-20 percent of the variation in total inflation. Aside from inertia and other factors not captured by the model, exchange rate changes explain around 28 percent of the variation in headline inflation.

This paper was prepared by Rita Babihuga and Gaston Gelos.

We also examined the impact on the producer price index (PPI), finding that world food price shocks have a large positive and significant impact on producer prices, with the impulse response of the PPI to an increase in world food prices exceeding, in magnitude and duration, the response of consumer prices to the same shock. As in the case of CPI (¶14), the impact of world fuel prices on the PPI is minimal.

When using a peso-based price index, the initial impact is positive and significant, but after the first quarter, the impulse response looses significance.

Gasoline products account for just under 3 percent of the total CPI basket.

On average, this would be equivalent to a 0.5 percentage point increase (decrease) in the unemployment rate.

Pass through of World Food Price Shocks to Headline inflation 1/

Contribution to Variation in Headline Inflation 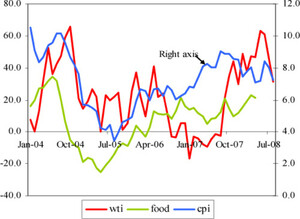 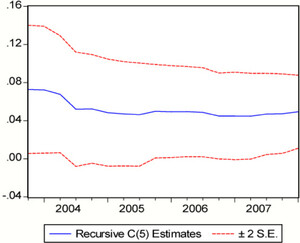 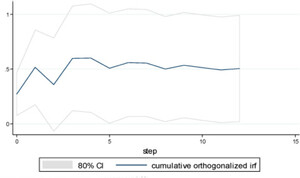 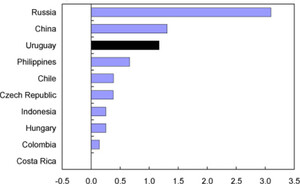 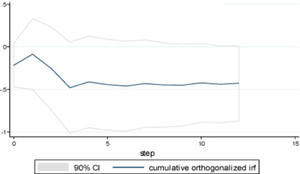 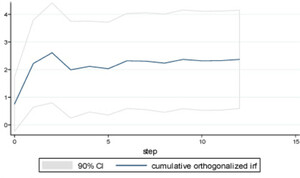 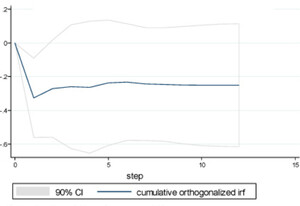 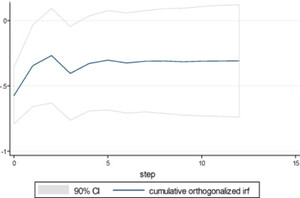 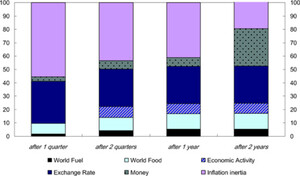