This Selected Issues paper for Peru shows that during the years of strong growth and high commodity prices, the Peruvian authorities have conducted a prudent fiscal policy, maintaining a broadly neutral fiscal stance. During 2004–08, while the revenue-to-GDP ratio increased 3.7 percentage points, the expenditure ratio rose only 0.9 percentage points. Expenditure control focused on current spending and coincided with increasing government investment aimed at enhancing public access to infrastructure and social services. Fiscal policy has also outperformed budgets approved by congress, owing to higher-than-anticipated revenue, as well as the need to limit inflation pressures.

This Selected Issues paper for Peru shows that during the years of strong growth and high commodity prices, the Peruvian authorities have conducted a prudent fiscal policy, maintaining a broadly neutral fiscal stance. During 2004–08, while the revenue-to-GDP ratio increased 3.7 percentage points, the expenditure ratio rose only 0.9 percentage points. Expenditure control focused on current spending and coincided with increasing government investment aimed at enhancing public access to infrastructure and social services. Fiscal policy has also outperformed budgets approved by congress, owing to higher-than-anticipated revenue, as well as the need to limit inflation pressures.

A. Anatomy of the Recent Credit Expansion

18. The Peruvian economy has experienced several pronounced credit cycles over the past decades. The hyperinflationary experience of the late 1980s virtually eliminated credit from the economy, while the financial stress and economic contraction of the late 1990s and early 2000s led to a sharp fall in the ratio of credit to GDP and per capita credit. The legacy of the hyperinflationary experience of the late 1980s continues to influence the financial sector in Peru, as dollarization of bank deposits and credit remains high, although decreasing in recent years (Figure 1). Financial deepening is low compared to the level of other emerging countries, with domestic capital markets yet to develop significantly, as commercial banks remain the main providers of credit.

19. In the current expansionary credit cycle, initiated in 2004, domestic currency loans have grown faster than those in foreign currency. Credit growth has recovered strongly since 2004, although it still remains below previous peaks in the mid 1970s (in per capita terms) and in the late 1990s (in relation to GDP). In particular, the growth of credit in domestic currency has recovered more strongly for consumer loans and medium-sized firms, helping to reduce the still high level of credit dollarization.

20. Much of these developments reflect a combination of strengthened confidence in the local currency and financial innovation.13 Clients that previously had access only to informal credit markets are increasingly participating in the formal banking sector, including in the export-oriented agricultural sector. At the same time, there have been entrants to the consumer loan business, most notably foreign banks with new technologies and business models, including some linked to large retail stores. Banks have also significantly expanded their credit card business and introduced payroll-linked loans. As a result, bank loan portfolios have changed significantly since 2004, with consumer loans increasing their participation in total loans by about 10 percentage points.

21. The latest period of credit expansion has taken place in the context of a strengthened financial sector, including an improvement in the quality of banks’ loan portfolios. The strong economic expansion since the early 2000s, combined with improved prudential regulation and supervision and banks’ risk management, have been reflected in a decline in nonperforming loans and higher provisions. The credit expansion has been led by large banks and microfinance institutions, with the most dynamic segments being loans in domestic currency for consumption and microenterprises, as well as foreign currency denominated mortgage loans.

B. Is There a Credit Boom?

22. The presence of a credit boom in Peru is assessed using the methodology developed by Mendoza and Terrones’ (2008).14 A Hoddrick-Prescott filter is applied to monthly data of real credit (in logarithms), from January 1992 to October 2008, to determine the trend and standard deviation of the cyclical component of each series.15 A credit boom is then identified when the cyclical component of credit exceeds a threshold of 1.75 standard deviations, which covers 95 percent of the credit cycle episodes.

23. The results of this analysis suggest that while financial system credit has decelerated recently, the growth of bank credit has been accelerating toward a “boom threshold” in recent months (Figure 2). The growth of financial system credit—which comprises banking activity and pension funds’ financial investments—entered into a boom in 2007, and then decelerated markedly, reflecting the sharp fall in the value of managed assets in response to the sharp fall in stock prices that began in mid 2007. Bank credit approached the threshold in mid-2007, but this process moderated as the central bank increased reserve requirements and its policy interest rate, and the Superintendency of Banks tightened prudential regulations.

24. The rapid expansion of bank credit has been driven by the largest institutions. The application of the methodology to large, medium and small banks shows that all these institutions display robust growth, with the largest banks showing a positive deviation from their trend, but still below the boom threshold.16 At the same time, credit by the medium sized and small banks appears to be growing along their trend. Overall, credit growth by microfinance institutions (cajas municipales and rurales) shows no evidence of boom. A decomposition by currency suggests that both credit in Nuevo Soles and U.S. dollars remain below the boom threshold; however, credit in Nuevo Soles by microfinance institutions has accelerated toward the boom threshold (Figures 3 and 4).

8. While credit growth remains strong, macroeconomic policies and prudential regulations can moderate its pace while allowing for financial deepening.17 Macro policies, including monetary, fiscal and exchange rate policies, affect credit by influencing its price, while prudential policies (regulatory and supervisory) can make lending decisions more or less expensive by affecting banks capital, liquidity and provisioning requirements, or by influencing its supply through, for example, loan-to-value ratios.

9. A number of measures have been implemented to moderate the still high growth of credit, while limiting the potentially negative effects of the global financial crisis (Tables 1 and 2). Over most of the past year, policies have aimed at moderating the rapid rates of credit growth. However, in recent months, policies have continued to aim at moderating rapid credit growth, while at the same time ensuring adequate levels of liquidity in the financial system to avoid a sharp contraction of credit. The main measures implemented by the authorities include:

11. While the policy response has been appropriate and comprehensive, additional measures could be considered. The authorities used a broad range of policy tools and were quick to react to a rapidly deteriorating international environment. As the prospects for the international economy remain uncertain, and thus, its impact on Peru, the authorities could consider the following measures:

The Peruvian authorities issued in November 2008 a regulation requiring financial institutions to constitute procyclical provisions. The main characteristics of the new requirements are as follows:

Procyclical Provisioning Rates. The following provisioning rates will be applied to all performing loans whenever the procyclical rule is activated, in addition to the generic provisioning rules already in place:

Thresholds activating and deactivating Procyclical Provisions. The procyclical provisioning will be activated whenever one of the following scenarios occurs:

The rule will be deactivated whenever one of the following occurs:

Additional General Considerations: (i) The moving averages will be computed using monthly information of the y-o-y GDP growth as calculated by the Central Bank of Peru; (ii) The procyclical provisions cannot be reverted in any case; and (iii) When deactivated the buffer built by the constitution of the procyclical provisions can be reallocated to specific provision for nonperforming loans if needed.

Current statistics are likely to overstate consumer lending and understate credit to medium-sized firms, as some firm owners take personal lines of credit and use credit cards for working and investment capital, which is currently classified as consumer loans. The SBS has established new categories of loans to better differentiate these loans.

This follows the procedure described in Mendoza and Terrones’ (2008).

We only report results starting in January 2000 given data limitations in earlier periods.

We excluded from this analysis several small banks that entered the market in 2007 and 2008.

Is There a Credit Boom in Peru? Total Credit

Credit Cycles in Domestic Currency by Type of Institution

Credit Cycle in Foreign Currency by Type of Institution 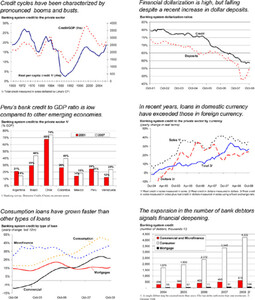 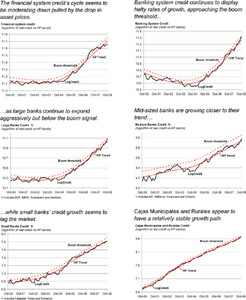 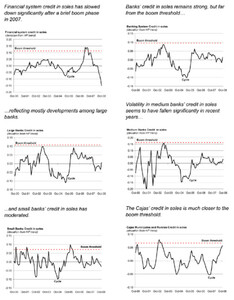 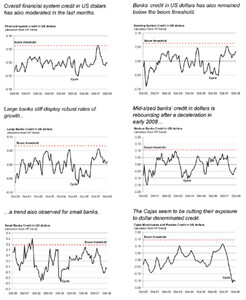