This Selected Issues paper for the Republic of Korea focuses on the role of monetary policy in the current context of slowing growth and rising inflation pressures. Korea has not remained immune to the global slowdown, and with the cycle turning downward, the trade-off between inflation and growth is deteriorating. Subprime-related turbulences in financial markets add an extra element of uncertainty to the economic outlook, and have led to a noticeable increase in Korea’s stock market and exchange rate volatility.

This Selected Issues paper for the Republic of Korea focuses on the role of monetary policy in the current context of slowing growth and rising inflation pressures. Korea has not remained immune to the global slowdown, and with the cycle turning downward, the trade-off between inflation and growth is deteriorating. Subprime-related turbulences in financial markets add an extra element of uncertainty to the economic outlook, and have led to a noticeable increase in Korea’s stock market and exchange rate volatility.

I. Rising Prices, Slowing Growth, and the Implications for Monetary Policy 1

1. Like many countries, Korea is facing an increasingly challenging environment for conducting monetary policy. Commodity prices are fueling headline inflation and what started largely as a supply-side shock is feeding into higher core inflation. Given the large terms of trade shock—Korea is the fifth largest oil importer in the world—the won has lost 16 percent of its value since mid-2007, further adding to inflationary pressures. In addition, Korea has not remained immune to the global slowdown and with the cycle turning downward, the trade-off between inflation and growth is deteriorating. Finally, subprime-related turbulences in financial markets add an extra element of uncertainty to the economic outlook, and have led to a noticeable increase in Korea’s stock market and exchange rate volatility.

2. In addition, current events pose the first real test to Korea’s inflation targeting framework. With inflation now exceeding its target for several quarters, the main challenge will be to keep inflation expectations well anchored. If inflation expectations get out of hand a wage-price spiral may ensue and make the eventual adjustment more costly in terms of lost output. It is therefore paramount that monetary policy remain ahead of the curve and that the Bank of Korea (BOK) communicate clearly the rationale of its rate decisions.

3. This chapter uses a small structural macro model to analyze the inflation outlook and challenges for monetary policy. The model is the IMF’s forecasting and policy analysis system (FPAS) and is used, in similar forms, by central banks around the world2. Parameter specifications have been chosen such that the model reproduces key characteristics of the Korean economy. The chapter proceeds as follows. The next section reviews Korea’s monetary policy framework, discusses its track record, and describes recent inflationary developments. Section II presents the model and its calibration to Korean circumstances. Section III reports the baseline projection and various shocks to the baseline, including policy responses. Section IV concludes.

B. Background and Recent Developments

4. In 1998, Korea adopted inflation targeting, as financial innovation had made the earlier framework of monetary targeting impractical. For a transitional period the BOK used both systems in parallel, but from 2001 onwards monetary aggregates were dropped as intermediate targets. The Bank of Korea Act stipulates price stability as the purpose of the central bank and every three years the bank sets a medium-term inflation target which it seeks to achieve on average. The central bank targets headline inflation, except for the period 2000-06, when it targeted core inflation, and since 2004 the target band has been 2.5-3.5 percent. Once a month the bank’s monetary policy committee decides on the policy interest rate, which was changed from the overnight call rate to the 7-day repo rate (Base Rate) in March 2008.

6. However, until recently the inflation targeting framework had not been put to a real test. The relative success of inflation targeting may owe much to the special economic circumstances of the last years. For one thing, the sizeable and steady increase in the exchange rate—the won appreciated by 70 percent in NEER terms between 1998 and mid-2007—helped keep inflation at bay. Also, inflation targeting in Korea may have been helped by the integration of China’s and India’s vast labor pool into the global economy and the wage moderation that this induced.

7. Meanwhile global and domestic circumstances have become more challenging (Figure I.1.) Real oil prices are at historical highs at a time when the global economy is slowing and key domestic variables point to a risk of sustained inflation:

8. The FPAS model describes a small open economy with an inflation targeting framework. It combines the New Keynesian emphasis on nominal rigidities and the role of domestic demand in output determination with the rational, forward-looking behavior propagated by the real business cycle literature. The model expresses each variable in terms of its deviation from equilibrium and does not attempt to explain the equilibrium values themselves.4 It is a two-country model, in which Korea’s economy is depicted by four key equations, that can be derived from micro foundations (see also Appendix I.1):

In sum, the model has four endogenous variables—output gap, inflation gap, real interest rate gap, and exchange rate gap—which equal zero in the steady state. In the event of a positive shock to inflation, interest rate increases lower inflation directly by curbing domestic demand and indirectly through exchange rate appreciation and the dampening effect this has on external demand and pass-through.

9. The model has been parameterized to reproduce key characteristics of the Korean economy (see also Appendix I.1). In a first step, models of similar countries were used to inform the parameter specification; in particular, the Canadian model by Berg and others (2006) was used as a benchmark. In a second step, shocks were applied to the model’s steady state, and the stylized facts generated in this way were compared to what is known about the monetary transmission mechanism in Korea. For example, the model’s sacrifice ratio, the effect of oil price and exchange rate movements on growth and inflation, and the lag in monetary transmission are broadly in line with the Korea-specific literature and accounts by Korean researchers and policy makers. However, the short track record of the inflation targeting framework and the absence of major shocks complicates the parameterization of the model and warrants more than the usual caution in interpreting the results.

10. This section uses the model to analyze the inflation outlook and risks to the outlook, as well as the implications for monetary policy. While the baseline forecast is informed by the model’s predictions it is, in effect, a judgmental forecast that takes into account a much broader set of available data, including short-term indicators, market expectations, and views of policy makers. To analyze key risks to the outlook, residuals in the main equations are chosen such that the model reproduces exactly the baseline forecast. Subsequently, this tuned baseline forecast is subjected to various shocks.

11. In the baseline, monetary tightening and slower growth help contain inflationary pressures (Figure I.2). Using a standard parameterization of the monetary reaction function, as well as parameterizations more in line with past BOK behavior, the model calls for an interest rate hike in the third quarter of 2008. The baseline assumes an interest rate hike by 0.5 percentage points to 5.5 percent. While this move would leave real interest rates in accommodative territory, the resulting appreciation in the currency and, more importantly, the projected economic slowdown should help bring down inflation starting from the first quarter of 2009. The output gap should turn negative from the third quarter onward and growth is expected to remain below potential throughout 2009. Despite the projected moderation of inflationary pressures—oil price inflation is also expected to come down significantly—common measures of inflation persistence suggest that headline inflation would remain elevated for some time and stay above the target band for most of 2009.

12. With higher oil prices, monetary tightening would need to be more aggressive(Figure I.3). There is a lot of uncertainty surrounding the oil price baseline, with upside risks from low spare capacity and downside risks from slower global growth. The shock scenario assumes that oil prices reach US$200 per barrel in the fourth quarter of 2008 and return steadily to the baseline by 2012. Under such circumstances, inflation would be about ¾ percentage points higher in 2009 relative to the baseline and return into the target band only by the second quarter of 2010. Policy rates would have to rise to above 6 percent when the shock occurs and remain at that level for three quarters. This would remove most monetary accommodation by mid-2009. Since U.S. and Korean monetary policy react similarly to the oil price shock, the exchange rate would be little affected. The additional monetary tightening in response to the shock, as well as the further slowdown in U.S. growth in response to higher oil prices, would reduce growth by up to 0.3 percentage points and delay the return to full potential by several quarters.

13. A deeper than expected U.S. downturn could require some monetary easing (Figure I.4). An end to the U.S. subprime crisis is not in sight. Hence, this scenario assumes that U.S. growth will be 1 percentage point lower in the fourth quarter of 2008 relative to the baseline scenario and remain below the baseline until mid-2010.6 This will reduce growth in Korea by 0.3 percentage points in the quarter of the shock and 0.7 percentage points in the second quarter of 2009. The policy rate should be steadily reduced to a low of 2¾ percent in early 2010, thereby providing monetary stimulus over much of the medium term. Again, the exchange rate would be little affected as U.S. and Korean monetary policy would respond similarly to the demand shock. Despite the monetary accommodation inflation would be lower by up to 0.6 percentage points relative to the baseline, but the inflationary impact of lower growth would occur with a lag of 2 quarters.

14. Exchange rate depreciation should lead to monetary tightening if balance sheets remain intact (Figure I.5). The global financial turmoil is far from over and markets remain volatile. In such a situation, another bout of bad news could trigger a substantial depreciation of the Korean won. This scenario assumes that capital outflows lead to a 10 percent depreciation of the won in the last quarter of 2008 without damaging balance sheets and, hence, constraining monetary policy. The weaker currency boosts inflation by 0.3-0.4 percentage points relative to the baseline and the return into the target band is delayed by one year. Monetary policy helps contain the inflationary impact of the devaluation by raising the policy rate by a maximum of 1¾ percentage points relative to baseline. If balance sheet effects can be avoided the weaker currency would give a boost to GDP.

15. Current circumstances call for a tightening of monetary policy, despite the projected slowdown of global and domestic demand. Higher oil prices, the weak won, and still-high money and credit growth will continue to exert inflationary pressure over the coming months. This needs to be weighed against the deflationary impact of slower global and domestic growth over the next quarters. Using a standard parameterization of the monetary policy reaction function, as well as parameterizations more in line with past BOK behavior, the model calls for an interest rate hike in the third quarter of 2008.

Equilibrium values are derived with the help of an augmented HP-filter that leaves room for value judgments. For example, the smoothing procedure can be programmed to produce a zero output gap in a particular year.

In the Korean context it may also be explained by the strain abrupt interest rate hikes would put on households given the predominance of flexible rate mortgages.

Since the model is a two-country model, U.S. growth is determined endogenously and stays below the baseline for several quarters. The U.S. growth shock does not affect oil prices which are exogenous in the model, hence, simulated effects on Korean growth and inflation should be considered as upper and lower bounds, respectively. 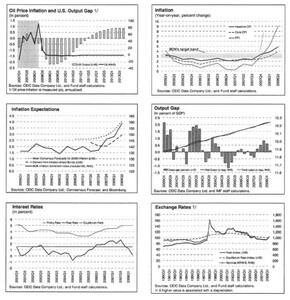 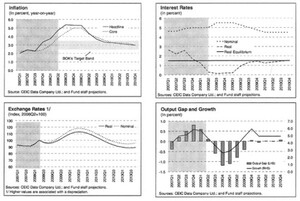 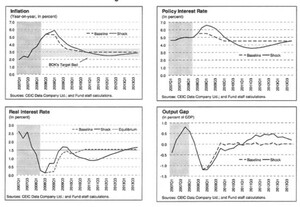 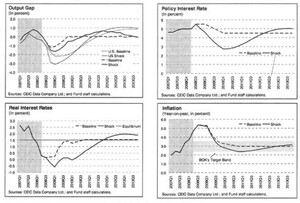 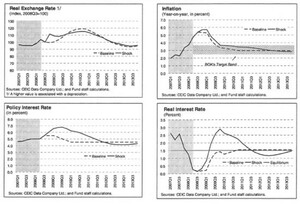