This Selected Issues Paper on Iran reviews that monetary factors are the main determinants of inflation in the country. Government spending out of oil revenues leads to large liquidity injections that the central bank accommodates owing to its efforts to prevent a significant nominal appreciation of the rial and the lack of effective sterilization instruments. The growing discontent with inflation, however, has compelled policymakers to focus on this issue, bringing it to the forefront of the policy agenda.

This Selected Issues Paper on Iran reviews that monetary factors are the main determinants of inflation in the country. Government spending out of oil revenues leads to large liquidity injections that the central bank accommodates owing to its efforts to prevent a significant nominal appreciation of the rial and the lack of effective sterilization instruments. The growing discontent with inflation, however, has compelled policymakers to focus on this issue, bringing it to the forefront of the policy agenda.

This chapter examines the operations of the Oil Stabilization Fund (OSF) in Iran. It starts with a brief discussion of the role of oil in the Iranian economy. Subsequently, the chapter presents a detailed description of the OSF’s design and operations. It concludes with recommendations on how to strengthen the OSF’s role in macroeconomic management by focusing on its stabilization objective and integrating its operations with the central government budget in the context of a rolling medium-term fiscal framework.

A. The Design and Operations of the OSF

46. While the oil sector has played an important role in the Iranian economy, the sector was very volatile during the 1970s–1990s.29 In the 1970s, oil value added accounted for over 40 percent of GDP due to high oil prices and production volumes. However, following significant declines in oil production, this share shrank to about 10 percent immediately after the 1979 Revolution (Figure III.1). During the war with Iraq (1981–88), the contribution of oil value added to GDP bottomed at 3 percent in 1986, mainly because of war-related damages to oil production facilities and declining oil prices. In the 1990s, the oil sector recovered somewhat, with oil extraction value added fluctuating around 15 percent of GDP, reflecting the volatility of oil prices. As a result of oil sector fluctuations, government oil revenue ranged from 3 percent of GDP (25 percent of government revenues) in 1986 to about 16 percent of GDP (73 percent of government revenues) during 1993–94. This revenue volatility was reflected in large expenditure fluctuations, particularly in capital expenditures. The pro-cyclical fiscal stance exacerbated the variability of output, inflation, and the real effective exchange rate.

47. To address the shortcomings stemming from expenditure volatility, the Iranian authorities set up an Oil Stabilization Fund (OSF) in 2000 as a separate public sector institution.30 Article 60 of the Third Five-Year Development Plan (TFYDP, 2000–05) established the following objectives of the OSF:

48. The accumulation of OSF deposits was to be driven by the difference between projected and actual oil revenues. Specifically, Article 60 of the TFYDP and Article 1 of the Fourth Five-Year Development Plan (FFYDP) stipulated that annual crude oil export revenue up to a certain limit should be directly drawn by the central government, and that all excess oil revenue should be deposited in the OSF. The oil revenue projections were based on conservative oil price assumptions.

49. The TFYDP and FFYDP envisaged two types of withdrawals from the OSF. First, at the beginning of the plan’s third year, the central government could draw from the OSF account if the government’s oil export receipts fell short of the budgeted amount for that year. Second, an amendment to the TFYDP law in November 2000 stipulated that up to 50 percent of the OSF’s balance should be set aside for lending foreign exchange to domestic private entrepreneurs in priority sectors via commercial banks. Loans were to be repaid in foreign exchange within eight years, with a three-year grace period, at an interest rate of LIBOR+2 percentage points (later capped at 10 percent).

54. Sizeable oil price increases during 2000/01–2007/08 made it politically difficult to contain expenditure growth within the initial five-year plans’ envelopes. In the context of the annual budget deliberations and mid-year budget revisions, parliament approved central government withdrawals from the OSF to finance central government expenditures, with a part earmarked for specific programs or projects, including to cover gasoline imports (Tables III.1–2).

55. In contrast to the central government budget overspending, the OSF’s domestic loans portfolio remained well below the 50 percent ceiling on the total OSF balance during 2000–05. This was mainly attributable to relatively unattractive terms and the small size of the private sector. Many borrowers viewed dollar-denominated OSF loans as too expensive, considering in particular the rapid rial depreciation during 2000–x05. Indeed, the equivalent rial rates of return on OSF loans were estimated to have reached 20 percent, well above the official 15 percent rate charged by the state-owned banks on rial-denominated loans.35 Equally important, the limited number of private sector companies involved in exporting activities significantly limited the pool of prospective loan applicants.

56. Since 2005, OSF lending rules have been gradually softened to increase loan attractiveness, which has led to approaching the 50 percent ceiling. Projects in “depressed regions” and certain enterprises experiencing financial difficulties saw the maturity of OSF loans extended up to 17 years, and the interest rate reduced to 3 percent. Also, OSF financing was made available to state-owned companies, partly to counter the impact of international sanctions that limited their access to foreign borrowing. In 2007/08, the government converted some of the OSF deposits at selected state-owned commercial banks into equity to strengthen their capital.

57. Certain aspects of the OSF could be improved taking into account the lessons learned from its own experience and best international practices.

58. Maintaining the OSF’s stabilization objective appears appropriate, as the budget is projected to remain vulnerable to oil price declines in the medium term. Precautionary savings are particularly justified in the case of Iran because of lack of access to international financial markets and limited opportunities for domestic non-inflationary financing to ride out a period of lower oil prices.37

59. Long-term sustainability and intergenerational fairness considerations do not represent a binding constraint. The non-oil primary fiscal deficit is estimated at 17 percent of GDP and implicit energy subsidies are estimated at 22 percent in 2007/08. Their combined ratio to GDP is well below the sustainable real expenditure from oil wealth, which is estimated at 65 percent of GDP in 2007/08 assuming a conservative oil price of $85 per barrel (at constant U.S. dollar terms). Therefore, there is no compelling need to save more oil revenue than justified by precautionary motives.

60. Transferring OSF’s domestic lending operations to the budget would facilitate fiscal planning. Should the authorities choose to maintain policy-motivated foreign currency lending, it would be advisable to transfer the administration of this lending to the central government. In this case, lending amounts should be approved by parliament in the context of the central government budget. This approach will de-link the amount of OSF withdrawals from oil price fluctuations, contributing to the fulfillment of the OSF’s stabilization objective.

61. The existing OSF accumulation and spending rules should become more flexible and responsive to oil price and macroeconomic developments:

62. The OSF’s transparency can be further enhanced.39 The information that is publicly available (e.g., the key legal documents governing the OSF operations and disseminated elements of OSF financial operations) could be usefully posted on an OSF-dedicated website. In addition, more detailed information, including annual cashflow statements and summary balance sheets, could be disseminated to the public on a regular basis. Websites of a growing number of oil funds, including Norway’s Government Pension Fund-Global, can serve as good examples of transparent communication with the general public.40

63. Going forward, the OSF may benefit from diversifying its foreign exchange asset portfolio to increase long-term returns. The current practice of managing the OSF foreign assets in the same pool as gross official reserves appears justified because the end-2007/08 OSF deposits are estimated to cover only about 22 percent of the budgeted 2008/09 expenditure. If the government decides to build up a larger precautionary balance, which can be used to facilitate expenditure adjustment to prolonged periods of oil price declines, the OSF deposits could be invested in somewhat less liquid and riskier assets.

This chapter was prepared by Roman Zytek.

For details on the OSF’s history, see Amuzegar (2005). For a general review of the operational aspects of fiscal policy in oil-producing countries, see Davis, Ossowski, and Fedelino (2003), and IMF (2007). In addition, Hunt, Isard, and Laxton (2001), Mehrara and Oskoui (2007), and Shabsigh and Ilahi (2007) present comparative studies of macroeconomic fluctuations in oil-exporting countries.

The MPO has been recently integrated into the presidential administration.

The MCC has been recently integrated into the supreme council for economic planning and management.

The government’s attempts to mandate insurance against foreign currency risk failed because the insurance companies were unwilling to provide such services, citing their lack of experience in this field and the overly long coverage periods that made risks difficult to price.

For a comprehensive discussion of the issues related to managing extrabudgetary funds, see Allen and Radev (2006).

For an analysis of long-term trends in commodity prices (including oil) see Cashin, Liang, and McDermott (2002); for a review of global demand and supply conditions for petroleum products see National Petroleum Council (2007), and Krichene (2005, 2006, 2007).

See IMF (2005) for a detailed discussion of transparency issues related to revenues from natural resources. 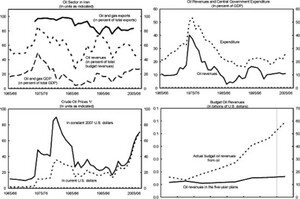