This Selected Issues paper assesses the stability of Singapore’s banking system in a regional context. It proposes a novel methodology for gauging domestic financial stability. The paper assesses the impact of fiscal measures on macroeconomic activity, and analyzes the effects of monetary policy using structural vector autoregressions. Estimates show that the Monetary Authority of Singapore’s exchange rate-centered framework is well suited to shape monetary decision making, given the large impact that changes in the nominal exchange rate have on activity and prices.

This Selected Issues paper assesses the stability of Singapore’s banking system in a regional context. It proposes a novel methodology for gauging domestic financial stability. The paper assesses the impact of fiscal measures on macroeconomic activity, and analyzes the effects of monetary policy using structural vector autoregressions. Estimates show that the Monetary Authority of Singapore’s exchange rate-centered framework is well suited to shape monetary decision making, given the large impact that changes in the nominal exchange rate have on activity and prices.

Singapore’s policy makers have often relied on fiscal policy to counter the impact of adverse external shocks. Against the background of the current uncertain external environment, this chapter analyze the effectiveness of fiscal policy in managing the economic cycle in Singapore. Empirical results based on a structural autoregression framework suggest that fiscal policy can be used as a counter-cyclical tool, but that the impact of fiscal policy is relatively short-lived and cumulatively small. This may reflect a number of factors, including the absence of credit-constrained economic agents, a high propensity to save among households, the use of quasi-fiscal measures not captured in budgetary data, a monetary focus on price stability, and leakages due to the openness of the economy.

1. The effectiveness of fiscal policy as a counter-cyclical tool is the subject of a longstanding debate among economists.2 Supporters of an active role for fiscal policy suggest that economies lack an efficient mechanism to return to full potential. Critics, on the other hand, argue that economic agents could offset the impact of fiscal policy on aggregate demand through changes in their savings behavior. A middle-of-the-road view holds that fiscal policy can be effective provided certain conditions hold, including sound macroeconomic fundamentals, nominal wage and price stickiness, imperfect competition, and/or economic agents with finite horizons and liquidity constraints.

2. Singapore has often used fiscal policy to counter adverse external shocks. In the aftermath of the Asian crisis (1998), the bursting of the tech-bubble (2001), and the SARS shock (2003), the authorities used fiscal policy to help cushion the impact on economic activity and vulnerable groups. The fiscal counter-measures focused on relief for both businesses and households, including through tax incentives, tax credits, transfer payments, and various rebates on housing and utilities.

3. In the context of the current uncertain external environment, the chapter analyzes empirically the effectiveness of fiscal policy in Singapore. Fiscal multipliers are estimated using a structural vector autoregression (SVAR) framework. The chapter is organized as follows: Section B looks at the cross-country evidence on the effectiveness of fiscal policy; Section C presents the empirical approach (elaborated in the Annex) and results for Singapore; and Section D concludes.

B. Cross-country Evidence on the Effectiveness of Fiscal Policy

4. The question of the effectiveness of fiscal policy is ultimately empirical. There is a vast literature on this topic. Studies generally support the role for counter-cyclical measures, but evidence on the size of fiscal multipliers is uneven:

5. Generally, the cross-country evidence suggest that the success of fiscal policy iscontingent on a number of factors. First, the fiscal response needs to be well-timed. This will tend to increase the effectiveness of fiscal policy in countries with short implementation lags and/or large automatic stabilizers (the latter being the first line of defense). Second, strong fundamentals, including macroeconomic stability and fiscal sustainability, will strengthen multiplier effects by lowering any possible offsets from precautionary savings. Finally, fiscal measures need to be well-targeted to ensure the largest possible demand impact.

6. VAR methods are standard in monetary policy analysis, but have only recently been applied to fiscal policy. This chapter does so by applying the SVAR methodology developed in Blanchard and Perotti (2002).

7. Intuitively, this methodology utilizes the (“inside”) lags in fiscal policy to identify discretionary structural fiscal shocks and their impact on economic activity:

A technical description of the methodology is presented in the Annex to this chapter.

8. Empirical results suggest that discretionary fiscal policy can have an immediate impact on private domestic demand and play a role as a counter-cyclical tool. However, the impact drops off quickly and eventually turns negative (Figure III.2 and III.3), leaving the cumulative effect relatively small compared to other countries. The estimated impulses are generally not significant past the fourth quarter. By aggregate demand component, the estimated impulse response functions (not shown here) suggest fiscal policy appears to have a larger impact on private investment than on private consumption. This may reflect a high precautionary savings-motive among Singaporean households and a government strategy of partly focusing discretionary measures on strengthening household savings.

9. Changes in revenues are estimated to have the largest impact-effect on private demand, but that impact fizzles out quickly. This is in contrast to results obtained for a number of other industrial countries, which tend to show a larger multiplier for expenditure measures. However, the puzzle could in part be explained by the narrower definition of government expenditure used here, which excludes key income transfers for lack of quarterly data.

10. Among expenditure components, the simulations show that changes in government current spending provides more stimulus than changes in public investment. Indeed, the estimates for investment multipliers are generally insignificant. This may reflect some crowding out of private investment activity.

11. A fiscal expansion has a positive but limited impact on inflation. The largest impact is related to changes in taxes, which is consistent with the estimated larger impact on private demand (and hence inflation pressures) from changes in government revenues. Government spending, on the other hand, does not appear to have a significant impact on prices.

12. Singapore’s large fiscal reserves provides ample scope to use fiscal policy to counter adverse external shocks. Given Singapore’s relatively small automatic stabilizers, a counter-cyclical response—when needed—would have to be primarily discretionary.3 However, the short fiscal lags allow for a fast response to changing economic conditions. In an uncertain external environment such as today’s, this flexibility provides some insurance against further negative spillovers from a more pronounced deterioration in the global economy.

13. Preliminary results suggest that fiscal policy in Singapore can serve as a tool for demand management, but cumulative fiscal multipliers are generally found to be small. This may reflect a number of factors, including:

14. This analysis could be expanded. It could be useful in future research to analyze the impact of more disaggregated fiscal measures on private demand and its sub-components, which could help strengthen fiscal design. A study of the impact of income transfers would be particularly desirable, since they are often used as a counter-cyclical as well as redistributive tool. Finally, the results could be subjected to sensitivity analysis, including with respect to the assumed expenditure and revenue elasticities. All these potential extensions remain on the research agenda.

Singapore does not have a comprehensive unemployment benefit scheme and corporate taxes are assessed based on previous year’s income.

Quarterly data for special transfers were unfortunately not available and are, therefore, not included in the expenditure data.

The models specified in this paper are robust to alternative specifications and residuals do not appear to suffer from autocorrelation. Tests for normality of error terms suggest there is not an issue with skewedness, but they cannot reject the hypothesis that there may be an issue with kurtosis.

Representation of the exogenous variables are excluded here to allow for a simplistic illustration of the model.

For Singapore, the elasticity of expenditures with respect to changes in economic activity is assumed to be close to zero within the quarter, as commonly assumed in many other empirical studies. The elasticity of revenues is estimated at around ½ percent within the quarter. The relatively low number partly reflects that corporate taxes are based on past year’s rather than contemporaneous earnings, leaving taxes less responsive to contemporaneous changes in economic activity. While the parameterization is plausible, the magnitude has implications for the estimated multipliers. 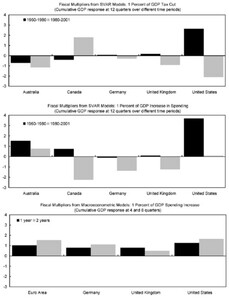 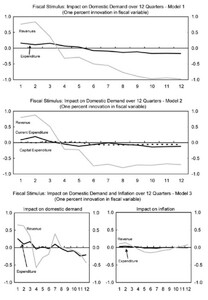 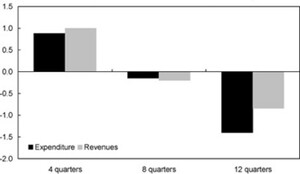