The vast mineral deposits of Mongolia, if properly managed, could make available large budgetary resources, which would help address a wide range of its economic challenges. This report focuses on Mongolia’s selected issues in the mining sector, government employment and wages, and saving and credit cooperatives. The attractiveness of Mongolia’s mining sector has been eroded in recent years with the introduction of the windfall profit tax (WPT). The high wage bill mainly reflects the large size of government employment and the recent rapid real wage increases.

The vast mineral deposits of Mongolia, if properly managed, could make available large budgetary resources, which would help address a wide range of its economic challenges. This report focuses on Mongolia’s selected issues in the mining sector, government employment and wages, and saving and credit cooperatives. The attractiveness of Mongolia’s mining sector has been eroded in recent years with the introduction of the windfall profit tax (WPT). The high wage bill mainly reflects the large size of government employment and the recent rapid real wage increases.

26. The public sector in Mongolia has undergone substantial changes since the early 1990s. In light of Mongolia’s transition from a centrally planned command system to a market-based economy, the public sector’s role in the economy has declined significantly. Accordingly, total government spending has declined from 52½ percent of GDP in 1993 to 34½ percent in 1997, accompanied by large reductions in the civil service workforce (13.4 percent of the civil service or 21,145 civil servants). Major public administration and civil service reforms undertaken in the early 1990s centered on establishing legal and policy frameworks for the state structure. During 1993–2000, the focus shifted to the creation of a professional civil service capable of implementing state policies, and since 2000, strengthening institutional capacities and efficiency has become a major challenge for the civil service of Mongolia.

27. Despite the reforms, the size of the civil service in Mongolia remains large, its composition skewed in favor of support staff, and wage scales highly compressed. Moreover, according to the 2008 budget, total wage spending by the general government is expected to reach 10.3 percent of GDP in 2008, which is very high in comparison with other countries. This very high wage bill, together with other rapidly rising expenditures, raises concern about fiscal sustainability over the medium term. This paper examines the recent government employment and wage developments, as well as the government’s efforts to reform the civil service, and suggests some policy options in the period ahead.

B. Recent Trends in Government Employment and Wages

29. The structure of the government employment by sector remained almost unchanged during 2000–07 with more than half of the government workforce employed in the health and education sectors. According to Ministry of Finance (MOF) data, the total government workforce stood at 135,175 in 2007, of which 47,019 (35 percent) were employed in the education sector, 23,998 (18 percent) in the health sector, 16,353 (12 percent) in public order and safety, and 15,845 (12 percent) in general public services.

30. There is a shortage of key technical staff, while there is an abundance of support staff. The Government Service Law (2002) classifies the civil service into four categories: (i) political service (including parliamentarians, Cabinet members, and governors); (ii) administrative service (central and local government staff); (iii) special service (including court judiciary, police, defense, and foreign affairs personnel as well as management staff of the central bank and statistics commission); and (iv) support service (including teachers, medical doctors, nurses, cleaners, research assistants, mechanics, librarians, drivers, and other administrative and executive posts of budgetary entities). During 2003–07, the number of political positions remained stable, while the number of support service, special service and administrative service posts increased by 7.9 percent, 15.3 percent and 29.6 percent, respectively. In terms of the composition of the civil service, 72.5 percent of government employees work in support service positions, while 7.5 percent and 18.1 percent work in administrative and special service positions, respectively. And 1.9 percent or 2,600 employees hold political positions within the government. The large number of support service employees suggests that there may be scope for efficiency improvements, or possibilities to contract out these services to the private sector.

Composition of Civil Servants by Assignment

The support service posts have 14 grades. Civil servants in higher grades are management of budgetary entities and other professional staff.

Composition of Civil Servants by Assignment

The support service posts have 14 grades. Civil servants in higher grades are management of budgetary entities and other professional staff.

31. The government wage bill has been rising rapidly in recent years and is very high, compared with other countries. The government wage bill increase was lower than GDP growth during 2001–05, but since then the wage bill has started rising very rapidly, reaching 89 percent in 2008, which has led to very rapid increases in the civil service’s real wage in recent years. The improved fiscal situation, reflecting rising mineral revenues due to very high commodity prices, has enabled the government to grant large wage increases since 2006. The wage bill as a share of total government spending had declined substantially from 20 percent in 2000 to 16 percent in 2006. Reflecting very high wage increases in the last two years, however, total wage spending by the general government is expected to reach 10.3 percent of GDP or 21.8 percent of total government spending in 2008. These ratios compare to 5.3 percent of GDP and 20.0 percent of total spending in Asian countries, and 3.9 percent and 12.6 percent in Eastern European and Central Asian countries. If not resisted, pressure to further increase wages rapidly could risk fiscal sustainability over the medium term.

33. The pay scale has been highly compressed. The ratio between the highest and lowest salary during 2004–07 remained very low at 2.7, which is well below Thailand (14.4), Philippines (9.5), and Cambodia (5.5), but above Indonesia (2.0). A closer look at the classification categories and even at the grade level within each classification shows that the salary scales were even more compressed. With this highly compressed pay scale, it is difficult to attract and retain qualified staff in the civil service. Therefore, in January 2008 the government increased the compression ratio to 3.4.30 The compression ratio in other countries ranges from 3 to 20, with a norm of about 7.31

34. Despite some progress being made, the system of allowances, rewards and incentives is very complex and often inconsistently applied across sectors and agencies. Thus, it is rather difficult to quantify its impact on total pay and the budget. Each sector has its own regulation endorsed by Parliament or the government for determining bonuses. In 2007, the government took steps to incorporate bonus payments for education and health sector employees in their base salaries, but further effort is needed to set a common rule for determining allowances and/or bonuses and improve the linkage between pay and performance. Other countries’ experience shows that a base pay to total pay ratio fluctuates between 80-100 percent.

35. After a long delay in implementing the medium-term Civil Service Reform Strategy (CSRS) adopted in early 2004, the government finally approved an action plan for the CSRS in July 2007. The action plan envisages a number of specific actions in line with four main strategic objectives outlined in the CSRS (Box II. 1). These actions, among others, include (i) introducing open, competitive selection processes for senior civil servants, (ii) establishing a civil service Human Resource Management Information System (HRMIS), and (iii) modernizing the remuneration system for civil servants by making it more responsive to labor market conditions and more performance-based. Another important measure is to develop a Wages Expenditure Control Model, which will facilitate costing exercises of planned salary increases.

36. The government has started taking some steps to address deficiencies in the current wage system. Major deficiencies identified by the government earlier were: (i) a low level of civil service wages, (ii) a very low compression ratio between the management and operational positions, (iii) inappropriate pay scales for support service staff that are not in line with their specialization, and (iv) outdated classification and ranking of posts. With a view to eliminating distortions in the pay scale, in 2007 the government revised the job description for civil service posts of each classification and ranking, and improved the classification and ranking of posts in each sector by revising titles and functions of public service posts. The government also revised the minimum pay scales for support service posts to have six different sub-scales for science, vocational education, primary and secondary education, health, culture and arts, and common services. In this connection, the supplementary payments for employees in the education and health sectors were also incorporated in the base salary.

37. The compression ratio was also raised to bring it closer to international standards. The compression ratios of public administration and support service posts were increased from 2.4 to 2.9 and from 2.4 to 3.1, respectively. To provide incentives to high-ranking officials, the government doubled the wages of state high-ranking positions and staff at the court and prosecutor’s office.

38. The Government Service Council (GSC) has successfully implemented functional reviews of three key ministries and a Civil Service Census in late 2007 (Box II. 2).32 The database of the Civil Service Census will be used as a baseline for a new HRMIS, which will be essential for improving personnel management. The functional reviews carried out in the Ministry of Social Welfare and Labor, the Ministry of Education, Culture and Science, and the Ministry of Finance analyzed the functional implications of the government’s policy priorities and identified needs for combining and shifting some functions to other ministries.

The Census counted 140,359 civil servants working in 4,001 budgetary entities at end-2007. Also, 112 self-financed organizations with 4,247 employees were covered in the Census. Main findings of the Census include:

The Census also revealed some shortcomings of the current civil service employment, such as cases of two or more positions taken by the same person, permanent employment with temporary appointment, and neglect of taking an oath, etc. The Census report did not address a possible level of ghost workers or other types of payroll fraud.

39. Spending on the civil service of over 10 percent of GDP is high in comparison with other countries, and continued further increases could raise concern about fiscal sustainability and the crowding out of other government expenditure. The high wage bill mainly reflects the large size of government employment and the recent rapid real wage increases. The wage scale is highly compressed, and the composition of the civil service is highly skewed toward support staff.

40. The Civil Service Reform Strategy adopted in 2004 needs to be fully implemented. The government has recently started taking important steps, including approving the Action Plan for the CSRS and completing a Civil Service Census and functional reviews of three key ministries. More needs to be done in the period ahead to rationalize the level of the civil service and increase the quality of services delivered. In this regard, the following could be considered: (1) imposing a partial freeze on new employment—allowing only selected strategic staffing in key civil administrative positions; (2) making the HRMIS fully operational to improve the database on civil service employment; (3) further improving coordination between the MOF, the Ministry of Social Welfare and Labor, and the GSC in order to effectively implement the CSRS; (4) promulgating a law on contracting out government services, a draft of which has been already prepared for internal discussion, and amending the Government Service Law to create a professional civil service with transparent rules for employment; and (5) formulating a fiscally affordable compensation and severance policy that is consistent with the CSRS to streamline the civil service, and integrating civil service reforms into medium-term budget frameworks.

Wages for high-ranking political positions (such as President, Prime Minister, Members of Parliament, Ministers, Vice Ministers, Chief Judge of the Supreme Court, Chairman of the Civil Service Council, and Aimag and Soum Governors) are not included. If included, the compression ratio in 2008 reaches 7.9.

The Census was conducted with support of the World Bank’s Governance Assistance Project (GAP).

Government Employment by Sector in 2007

(In percent of total government employment)

(As a ratio to per capita GDP) 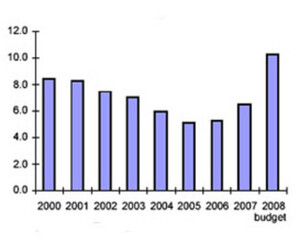 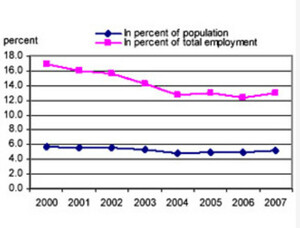 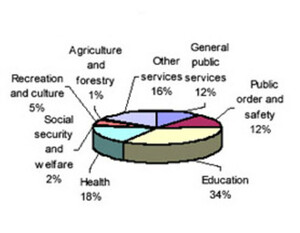 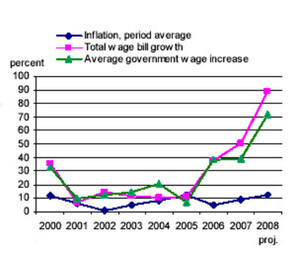 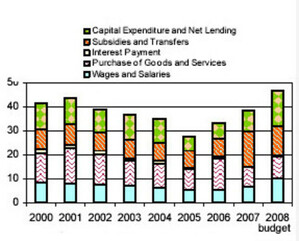 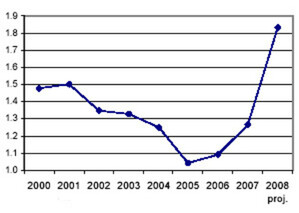