This paper assesses the link between public investment and economic growth in Burkina Faso. It also evaluates Burkina Faso's external competitiveness by using a comparison of REER to its equilibrium levels and a survey-based assessment of overall competitiveness. The report attempts to quantify the impact of rainfall and terms-of-trade shocks on the Burkinabe economy and draws policy measures to lessen external shocks. The report assesses that industrial mining has become a source of foreign exchange and government revenue, which requires transparent management and accountability.

This paper assesses the link between public investment and economic growth in Burkina Faso. It also evaluates Burkina Faso's external competitiveness by using a comparison of REER to its equilibrium levels and a survey-based assessment of overall competitiveness. The report attempts to quantify the impact of rainfall and terms-of-trade shocks on the Burkinabe economy and draws policy measures to lessen external shocks. The report assesses that industrial mining has become a source of foreign exchange and government revenue, which requires transparent management and accountability.

115. Although Burkina Faso has significant potential for mining manganese, bauxite, copper, nickel, zinc, limestone, and gold, mining accounts for only a small amount of Burkina Faso’s GDP. However, the mining industry is expected to become increasingly important to the economy; several gold mines are being developed and mineral exploration is intensifying. Since the mining code was revised in 2003, the number of exploration permits has increased to 443, against 353 between 1990 and 2002.

116. Gold mining could have a positive impact on public finances through higher revenue in the form of taxes on industrial and commercial profits; taxes levied on behalf of employees; priority royalties paid to the state; and dividends paid to shareholders, including the state. However, this source of income is unstable because it depends on trends in gold production and international prices.

117. The authorities have been promoting artisan mining as an activity that helps increase the incomes of poor people, especially in the dry season. Artisan mining essentially applies to gold. It mobilizes some 200,000 people who work in more than 200 sites throughout the country, with some sites accommodating up to 20,000 people at a time. Artisan mining makes little or no use of power equipment. Miners extract gold-bearing ores using simple hand tools, pulverize them using mortar and pestle, and wash the powder to pick out flakes of gold. Women are often active in the mining camps both workers and suppliers of food and other services. Between 1986 and 2005, according to official data, this activity yielded 15,576 kg of gold exports, slightly higher than industrial production. Official data show annual production of 190 kg of artisan gold in 2005, but the World Bank estimates that this may represent only 10–15 percent of actual production and exports. Measures to promote artisan mining include production and use of affordable equipment, improving land tenure systems, training miners on the technical characteristics of sites and mining methods, and improving social conditions at the sites.

118. Health and safety conditions in artisan sites are dismal. The state tried to organize and supervise the sector through a capacity-building project, PRE-CAGEME (National Mining Sector and Environmental Management Capacity Building Project). PRE-CAGEME, which ran from 1998 to 2004, promoted the development of small-scale mines and supported local companies designing and manufacturing user-friendly processing equipment for use without applying chemical products like mercury. Small-scale mines, mainly locally owned, use motorized equipment and other small power tools to extract and process mineral ores, which increases production and lowers costs compared to manual production. Mechanization allows the miner to go deeper, beyond alluvial deposits. Operation of the equipment requires technical and mechanical skills that are locally available, although in short supply. It is easier for the government to monitor operations and provide technical extension Services to small-scale than to artisan mines.

119. The only industrial gold mine in the 1980s and 1990s was Poura, operated by the parastatal Société de recherches et d’Exploitations Minières du Burkina. Its Output fell dramatically in the 1990s, and Poura suspended operations in 1998 due to low gold prices and managerial problems. Since then artisan production has become the only source of gold.

120. Burkina Faso’s gold reserves are estimated at more than 6 million ounces and industrial production was expected to begin in 2007. Six companies have obtained exploitation permits and two of them are starting production: Taparko, developed by Canada’s High River Gold Mines, and Youga, developed by the Burkina Mining Company with the Canadian Company Etruscan as a majority owner. The mines are expected to produce between 20 and 35 tons a year over a seven- to eight-year lifespan.

121. Another four gold mines are expected to start production in 2008 or later: Kalsaka, developed by Kalsaka Mining, a joint venture between British and Burkinabè companies; Mana, developed by the Canadian company Semafo); Inata Belahourou, licensed by Canadian Goldbelt Resources; and Guiro-Diouga, owned by STREMCO with British interests. Together they could produce some 65–70 tons/year for seven to eight years.

122. Though the Essakan mine developed by Canadian Orezone Resources Inc. and South African Gold Fields Ltd., which hosts the largest known gold resource in the country, has not yet requested an exploitation permit, production there could begin in 2009 and exports in 2010. Technical studies on other deposits could further boost gold exports after 2010. Forecasts of gold and mineral export earnings of Burkina Faso are shown in Table IV.1.

123. Low manganese prices and the lack of railway transport resulted in suspension of operations at the Tambao mine in 1998. A manganese mine in Kiéré is expected to start construction in 2008. An Australian company has been developing the Perkoa zinc deposit in the western part of the country and plans to start production in early 2008. The project is expected to add some US$90 million to Burkina Faso’s export earnings. A Canadian enterprise has been evaluating copper deposits in the south. The deposit at Kodjari produces 3,000 tons of phosphate annually, which are ground and used as fertilizer in Burkina Faso. Recent work by the BUMIGEB (Bureau of Mines and Geology of Burkina Faso) has identified several areas for uranium mineralization.

124. Since the mid-1990s the authorities have instituted a number of reforms to modernize the environment for mining investment. A new Ministry of Mines, Quarries and Energy was created in 1995. The regulatory mandates of the BUMIGEB and the state-owned buying office, the CBMP (Comptoir Burkinabè des Metaux Precieux), were revised to make them more supportive of private sector activities. In 1996 the government abolished the CBMP’s monopoly and issued regulations for the operations of private gold buying agencies. The CBMP was liquidated in 2006.

125. A mining code was adopted in 1997 to make exploration and exploitation of mineral resources more attractive. In 2003 the National Assembly revised it significantly and a new law was adopted to encourage mining prospecting and formalize semi mechanized small-scale operations to enhance the mining sector’s contribution to Burkina Faso’s Poverty Reduction Strategy.

126. The mining code establishes that mineral resources are the property of the state, with mineral rights to be granted by the Ministry of Mines, Quarries, and Energy. It gives domestic and foreign firms the same rights and obligations. The state guarantees the right of ownership, freedom of management, free transfer of capital and returns, and stability of agreements made according to the law.

127. The mining code provides for three types of permits: exploration (three years, renewable twice); industrial operation of mines; and semi mechanized small-scale operations. For industrial operations, after the initial permit (20 years for large mines, 10 years for small), permits are renewable for consecutive periods of five years until the deposit is depleted. Small-scale operations are granted a five-year permit, renewable for periods of three years.

128. The code distinguishes between exploration and exploitation, with the latter stage including a construction and an operation period. At the exploitation stage, the applicant for a permit must grant the state a 10 percent free ownership share in the mining company.

129. In the exploration stage holders of a permit or authorization are given customs and tax concessions. The custom concessions give the right to a duty of just 5 percent on equipment, spare parts, raw materials, consumables, fuel, and lubricants and also allow for temporary admission. Tax concessions consist of full exemption from VAT on goods and services, the industrial and commercial tax (BIC), the professional minimum flat rate tax (IMFPIC), and the employers’ and apprenticeship tax (TPA).

130. During the operations phase permit holders are exempted from the professional minimum flat-rate tax (IMFPIC), the employers’ and apprenticeship tax (TPA), and property in mortmain tax. These exemptions are valid for the lesser of seven years or one half the mine’s life. Permit holders also benefit from the right to a reduced customs duty of 7.5 percent on equipment, spare parts, raw materials, consumables, fuel, and lubricants. The VAT is subject to a refund system. A withholding tax of 7.5 percent and a company tax of 25 percent apply. The company tax takes into account exploration expenditure, a loss carry-forward for five years, provisions for site rehabilitation and deposit reconstitution, and accelerated depreciation for new equipment. Holders are also exempt from registration fees when increasing capital.

131. Industrial mining represents a major new source of foreign exchange and government revenue that requires transparent management and accountability to ensure that the revenues contribute to sustainable development and poverty reduction. If good governance is encouraged in the sector, revenues can be an important engine for long-term economic and social development. For these reasons, the authorities are considering the participation of Burkina Faso in the Extractive Industries Transparency Initiative.

132. The Burkinabè authorities still need to tackle obstacles that make for an unfavorable environment for attracting foreign investment in mining. Among them are inconsistent and arbitrary interpretation of the mining code by tax and custom officials, red tape in processing applications for permits, and delays in reimbursing VAT rebates. Rigidities in the Labor Code negatively affect mining companies, which need access to temporary employment in the exploration phase. Burkina Faso has considerable gold reserves to increase its exports and revenues; it would do well to ensure that its mining policies are sound and stable in their application. 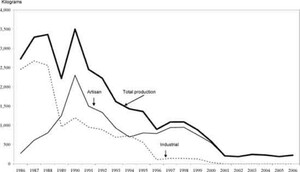