VII. Can the ECCU Afford to Grow Old?48

1. The demographic transition in the ECCU displays unusual characteristics. The transition now underway is rapid compared with international experience, and emigration is playing a particularly large role (Figure VII.1). Rasmussen and Roache (2007) found that the pension schemes in some ECCU countries are unsustainable, based upon recent actuarial reviews, and require significant reforms to place them on a sustainable path (Figure VII.2). By 2060, ECCU pension funds’ expenditure will exceed contributions by over 6 percent of GDP, based on pension funds’ actuarial projections.49

2. This chapter describes and quantifies several factors which could magnify the challenge of pension reform. First, for some ECCU countries, continued emigration at historical rates would considerably advance the projected date at which pension scheme assets are depleted. Second, there is a significant risk that assets will underperform, given the large exposures to the highly-leveraged public sector and to a lesser extent the record with private sector investments. Third, portfolio diversification away from the public sector could be complicated by age-related pressure for greater central government health spending.

B. Emigration and Sustainability

3. High rates of emigration from the ECCU have significant implications for the sustainability of pension schemes. A large proportion of the labor force emigrated to the OECD during 1970–2000, based on OECD members’ census data (Figure VII.3). ECCU members accounted for five of the top ten countries in the world ranked by this indicator. Dominica’s population actually declined according to its own 1991 and 2001 censuses (ILO, 2003).

5. Actuarial projections in the ECCU are particularly sensitive to the assumed rate of emigration. Actuarial reviews in most ECCU members have calculated the historical rate of net emigration as the residual change in population from 1991 to 2001 after accounting for births and deaths during that period (based on national censuses). In all cases, the baseline actuarial projections assume that the rate of net emigration, which may differ from the calculated historical rate based on the actuary’s judgment, slows moderately over time.

6. Estimating migration as the residual change in population after adjusting for births and deaths is problematic. For instance, the above approach for St. Kitts and Nevis implies annual net in-migration of 90 persons during 1991–2001. The residual by nature captures not only migration but also any weaknesses in census, birth, or death data.

7. OECD census data, which record a foreign-born resident’s country of origin, provide an alternative method of estimating emigration from the ECCU. Below, emigration is estimated as the stock of immigrants in 2000, assumed to have arrived during the previous 30 years, and calculating the average flow of emigration on that basis. Figure VII.4 compares the various approaches.51 The last approach will be referred to below as the “historical OECD rate.”

8. Constant emigration at the historical OECD rate would imply a stronger demographic transition for most ECCU countries than predicted in actuarial reviews. Under this assumption, the ECCU labor force with constant emigration is 15 percent lower by 2050 than under the actuarial projection (Figure VII.5).

9. In a scenario with constant emigration at the historical OECD rate, pension scheme assets are depleted earlier (Figure VII.6). It can be argued that this assumption is pessimistic, to the extent that ECCU emigration rates have historically been so high that they must at some point decline. In another sense, however, the projection can be seen as optimistic, since the ECCU’s emigrants have been disproportionately highly educated, and therefore higher than average contributors to pension schemes (Mishra, 2006).

11. The performance of some other assets has also been unsatisfactory. These include claims on a housing project and mortgages in Antigua and Barbuda; on the airport and water authorities in Grenada; on a car park, mortgages, and leases on government buildings in St. Lucia; and restructured claims on the government of Belize in St. Vincent and the Grenadines.52

13. The impact of demographics on pension spending can be placed in the context of trends in other age-related spending.53 This section assesses the impact of population aging in the ECCU on age-related budgetary expenditures on health and education, which were larger than pension scheme expenditure during 2004–06 (see Figure VII.8 and Chapter VIII of this paper).54

14. The net budgetary impact of aging during 2006–50 is to increase spending under plausible assumptions on spending trends. The projection below will assume: (i) education spending per youth as a percent of GDP remains constant;55 and (ii) health spending per elderly person as a percent of GDP remains constant.56 A breakdown by age group of the ECCU’s budgetary spending on health care is not available. The projection below will therefore incorporate optimistic and pessimistic scenarios, in which annual health spending per elderly person is twice and five times the spending per working age person respectively, reflecting the observed ratios in the United Kingdom and Germany (see Honjo, 2006; Federal Statistical Office Germany, 2004).

16. The factors identified above could magnify the challenge of pension reform and heighten the need for early action to address sustainability issues. Continued emigration at the historical OECD rate would advance the date by which pension fund reserves are depleted, and usable reserves would be depleted even sooner if the public sector has difficulty meeting its large debt service obligations.

17. The pension reforms implemented in St. Lucia in 2003 and Dominica in 2007 indicate that these challenges can be tackled:

18. The recommendations of actuarial reviews and the IMF’s Fiscal Affairs Department (FAD) provide a roadmap for other ECCU countries to address these challenges. Parametric reforms could include: gradually raising the retirement age from 60 (62 for St. Vincent and the Grenadines) to 65; increasing contribution rates, which are low by regional standards, as well as contribution ceilings; reducing pension accrual rates; and increasing the number of years over which the insurable wage is determined.

19. However, parametric reforms could fail unless supported by public sector adjustment and portfolio diversification. In the past, pension schemes have provided a captive source of financing for the budget and broader social objectives. This financing has relaxed governments’ budget constraints, and contributed to the ECCU’s unusually high debt levels. Parametric reforms will generate pension scheme surpluses, which should be used not to further relax budget constraints but to diversify social security scheme assets away from the public sector.

20. The concentration of pension scheme assets in the public sector reflects in part the regional perception that public investment should serve as one of the main catalysts of economic growth and development. The weak record of public investment in promoting growth, as described by Roache (2007), strengthens the case for diversification from public to private sector assets, and for limiting investments in the domestic public sector to government bonds. Increasing the share of international assets in scheme portfolios would diversify risk, which is particularly important given the region’s vulnerability to natural disasters.

21. As pension schemes diversify away from public sector assets, problems with the performance of private sector assets could become a greater issue. Pension schemes could take advantage of commercial banks’ comparative advantage in allocating resources by limiting domestic private sector investments to placing deposits through banks, and by no longer limiting deposits to those of locally-owned commercial banks. Less emphasis could be given to mortgage lending and other direct private lending, particularly in competition with the private sector. This would also reduce administrative costs, which are high compared with other countries, at the same time that asset returns are increased.

These are International Labor Organization (2005; 2004a; 2004b) for St. Lucia, Grenada, and St. Kitts and Nevis; findings by IMF’s Fiscal Affairs Department for Antigua and Barbuda (and ILO (2004c)), Dominica (and ILO (2003)), and Veira (2005) for St. Vincent and the Grenadines. Pension schemes for civil servants are excluded from the analysis below.

Yet another approach, calculating the change in the stock between 1990 and 2000 OECD censuses, would imply even higher rates of emigration for all ECCU countries but Dominica.

Pension fund financial statements do not provide sufficient detail to calculate the rate of return on nonpublic assets based on interest received rather than interest earned.

A study of age-related spending in the European Union found that population aging will increase costs on pensions, health care, and long-term care by more than it will reduce spending on education and unemployment benefits. See Economic Policy Committee and European Commission (2006).

All spending by Ministries of Health and Education are included, due to data limitations, and includes some spending that is not related to health or education.

In the ECCU, primary education to ages 12–14 is compulsory, while entrance to higher grades is selective.

In the ECCU, government mandates to provide health care are broadly stated, with an evolving practice as to which treatments and medicines are covered.

(As a percent of labor force)

(In percent of GDP, at actuarial emigration rates) 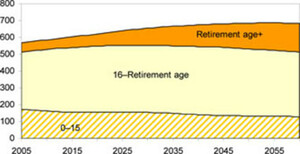 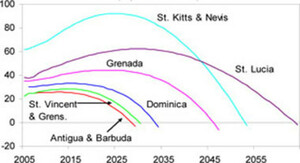 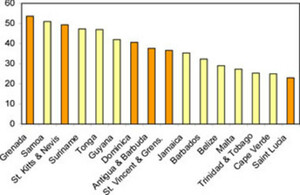 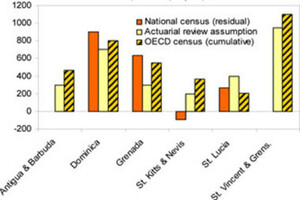 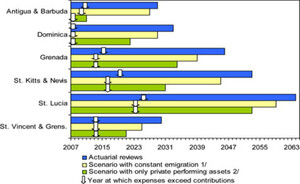