IV. How Vulnerable is the Eastern Caribbean Currency Union to a Banking Crisis?26

1. Over recent decades, the ECCU banking system has weathered numerous shocks, including: economic downturns associated with natural disasters, shocks to tourism, and sharp deteriorations in the terms of trade; and significant exposures to their fiscally-weak governments. Despite continuing vulnerability, the ECCU has not experienced a banking crisis—a natural question is from where does the stability of the ECCU banking system arise?

2. This chapter uses a binary classification tree (BCT) technique—a relatively new approach for assessing economic crises—to identify the factors underpinning the stability of the ECCU banking system. The BCT sifts through the database of explanatory variables and identifies the key indicators underlying a banking crisis, the threshold values beyond which these indicators signal a higher probability of crisis, and the sequence of conditions that together increase “crisis proneness” (Brieman and others, 1984). The results of the model provide insight into the stability of the banking system in the ECCU.

B. Empirical Literature and Methodology

3. Two estimation techniques have been predominantly used in the empirical literature to analyze banking crises: the signals approach, and the limited dependent variable approach.27 The signals approach—used by Kaminsky and Reinhart (1999, henceforth KR) to analyze “twin crises” or the occurrence of both currency and banking crises—is a bivariate approach that compares individual economic indicators for periods before and after a crisis, and identifies individual variables that most usefully signal an impending crisis based on crossing certain threshold values. Alternatively, the limited dependent variable model is a multivariate approach that computes the probability of a banking crisis using a logit or probit regression, as undertaken by Demirgüc and Detragiache (1998, henceforth DD).

4. The literature has established some common patterns associated with banking crises. For instance, both DD and KR find that banking crises are caused by: (i) output shocks (growth slowdown, or declining terms of trade); (ii) financial liberalization (proxied by rapid credit growth and rising cost of credit); and (iii) increasing external vulnerability (e.g., decline in export growth, an overvalued exchange rate, or declining foreign currency reserves).

5. However, important differences still exist on the accepted factors underpinning banking crises. For instance, while KR and DD find that banking crises are associated with rising interest rates, Rossi (1999) in his analysis of 15 developing countries during 1990–97 finds the opposite result. Similarly, Gavin and Hausman (1996) in their study of Latin America argue that lending booms are significant in setting the stage for banking crises, while Caprio and Klingebiel (2002) find no evidence to support this thesis.

6. The BCT approach used in this chapter provides a fresh perspective on banking crises, has some distinct advantages over existing estimation techniques, and is able to shed light on the above tensions in the literature.28 One prominent advantage of a BCT is that it does not require any assumptions about the underlying functional form of the model, which all regression models need to assume despite the fact that well-established relationships between explanatory variables are generally absent, particularly during crises. Moreover, the BCT is useful in uncovering nonlinearities, which is generally very difficult to establish with standard regression models. In particular, the BCT recognizes the fact that an indicator may trigger banking crises only after crossing a certain threshold and/or in combination with other vulnerabilities, while it could be relatively harmless in other situations. Thus for instance, as found in this chapter, rapid credit growth by itself may not be harmful for banks unless it reduces bank liquidity, and this occurs in combination with other vulnerabilities, such as high exposure to foreign exchange risk.

7. The BCT technique works in the following manner. Starting with the whole sample or the parent node (see Figure IV.1 which is also discussed in more detail below), the model compares all candidate variables at all possible threshold values and selects an indicator (and a particular threshold) which is best able to split the sample into a “purer” sub-sample or sub-sample where the probability of crises increases significantly compared with the sample average. The process repeats itself at each sub-sample (or child node) until further splitting is stopped or impossible. The latter happens when all the cases in that particular node are of the same outcome or there is only one case in the node. In general however, the tree size is determined in terms of the trade-off between the cost of growing (proportional to the number of nodes) and gains from improving the in-sample fit of the tree (proportional to reducing the rate of misclassification for the outcome). The model also ranks the indicator variables in terms of their ability to distinguish crisis from noncrisis observations.29

9. The sample comprises annual observations from 50 emerging market and developing countries, including the Caribbean, during 1990–2005.30 A banking crisis is defined as an episode involving banking sector problems that causes exhaustion of much of the capital and/or closure, merger, large-scale nationalization of banks; or extensive bank runs; or liquidity support by the central bank to avoid a run on deposits.31 Using these criteria, 127 annual crisis observations are identified, comprising 38 crisis episodes (Table IV.1).

10. The Caribbean region has generally been resilient to banking crises. 19 out of the 50 countries in the sample did not experience any systemic banking crisis during 1990–2005, of which 10 are from the Caribbean (including all six Fund-member ECCU countries). The only Caribbean countries that experienced banking crises were: Dominican Republic (2003–05), Guyana (1993–95), and Jamaica (1994–2000). Hence, identifying the factors underpinning banking system stability is relevant not just for the ECCU, but also the Caribbean as a whole.

11. The explanatory variables used in the analysis proxy for macroeconomic fundamentals (external environment, monetary conditions, and financial sector health), and are drawn largely from the existing crisis literature:

12. The baseline BCT model identifies macroeconomic instability, low profitability, and high foreign exchange risk as the most important precursors to banking crisis (Figure IV.1). The model has a good in-sample fit—it is able to correctly signal all but one crisis episode (97 percent), and has false signals for 19 percent of the noncrisis outcomes. The following conditions are identified as crisis prone:

13. The above results stress that exchange rate and inflation stability have been critical to banking system stability in the ECCU and other Caribbean countries. Of the 19 candidate indicator variables, the BCT ranked the following variables as key in terms of their importance as precursors to banking crises: (i) nominal depreciation, (ii) interest profitability, (iii) inflation, (iv) FC exposure, and (v) bank liquidity. It is interesting to note that the 10 Caribbean countries that did not experience banking crises have so far successfully maintained exchange rate pegs (except Trinidad and Tobago), which have helped maintain low or no nominal depreciation and relatively low inflation.

14. While some ECCU countries have experienced periods of bank stress, these vulnerabilities were not intense enough to trigger banking crises. Table IV.2 shows how each of the key banking crisis predictors identified by the BCT model (Figure IV.1) behaved in the ECCU countries since 1990. The region never experienced any exchange rate or inflation-induced instability, thanks to the regional quasi-currency board arrangement. Also, ECCU bank profitability has generally been high (see also Chai, 2006). At the same time, some ECCU countries experienced vulnerabilities in the form of high FC risk (St. Kitts and Nevis), and low bank liquidity (St. Lucia), which did not occur in combination with other vulnerabilities and hence these conditions were not crisis-prone.

A “vulnerable” episode is defined as one in which the value of a particular indicator in a country crosses the identified threshold or is close to it.

A “vulnerable” episode is defined as one in which the value of a particular indicator in a country crosses the identified threshold or is close to it.

15. However, the ECCU banking system should be closely monitored, given increasing foreign currency exposures and declining liquidity levels. In particular, the ECCB should ensure that the explicit exchange rate guarantee provided by the quasi-currency board does not induce an unmanageable build-up of FC risk, which could then undermine the stability of the currency board. The dollarization level in St. Kitts and Nevis has exceeded levels in other emerging market countries that experienced banking crises in recent years (see Table IV.3). Similarly, while rapid credit growth in the ECCU in 2006 has generally mirrored its strong economic growth, it is important to ensure that this does not compromise bank liquidity in a manner similar to the liquidity squeeze experienced in international financial markets in late 2007.

17. However, the stability of the ECCU banking system to date should not engender any complacency regarding its robustness. Some ECCU countries have experienced bank vulnerabilities—the banking system in St. Kitts and Nevis assumed high foreign currency risk during the sample period, but without any serious repercussions given the stable EC dollar peg. Similarly, liquidity levels in the St. Lucia banking system have declined considerably in recent years. These findings stress that even though the ECCU banking system has been stable, it should continue to be monitored carefully.

See Gaytan and Johnson (2002), and Demirgüc and Detragiache (2005) for comprehensive overviews of the banking crisis literature.

The BCT model has been used to analyze: currency crises by Ghosh and Ghosh (2002) and Frankel and Wei (2004); debt crises by Manasse and Roubini (2005); and capital account crises by Chamon, Manasse and Prati (2006). To the authors’ knowledge, this is the first study to use a BCT to analyze banking crises.

The data for banking crises draws from three sources: Caprio and Klingebiel (2002), Kaminsky and Reinhart (1999), and Carstens, Hardy, and Pazarbasioglu (2004). 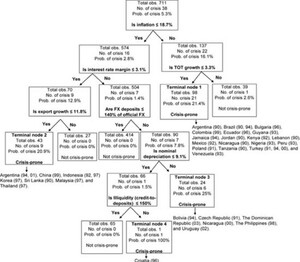