Increases in core inflation owing to the VAT hike were smaller than expected, initially constituting a puzzle and leading to speculation about delayed increases or competitive pressures. Given Germany’s large size and openness, spillover interactions appear to have increased over time. In the midst of a strong recovery, Germany is facing shortages of labor, the emigration of high-skilled labor, and a reduction in immigration. Germany’s traditionally insider-dominated corporate governance system has undergone substantial reforms, leading to a pronounced strengthening of control by outsiders.

Increases in core inflation owing to the VAT hike were smaller than expected, initially constituting a puzzle and leading to speculation about delayed increases or competitive pressures. Given Germany’s large size and openness, spillover interactions appear to have increased over time. In the midst of a strong recovery, Germany is facing shortages of labor, the emigration of high-skilled labor, and a reduction in immigration. Germany’s traditionally insider-dominated corporate governance system has undergone substantial reforms, leading to a pronounced strengthening of control by outsiders.

III. Economic Impact of Shortages of Skilled Labor in Germany17

30. Germany’s shortage of skilled labor is growing. A 2007 report commissioned by the Ministry of Economy found that these shortages cost the economy G 20 billion this year. Another 2007 study found that just the lack of engineers (22,000 vacant jobs) costs the economy G 3.7 billion annually.18 As each high-skill job creates opportunities for employment for other jobs, this points to particularly big losses for the economy at this time. Moreover, the shortages will be exacerbated as the population ages; official projections show that even now university graduates cannot fill the requirements. Although there is a large pool of unemployed and labor force participation could be further increased for some participants, the current pool of native German workers does not provide the full complement of needed skills. In this context, net migration is a particular concern. It adds to the labor shortages as high-skill natives leave, fewer return, and foreigners go somewhere else.

31. This paper discusses a two-pronged approach that the government can undertake to alleviate shortages of skilled labor and boost growth. Section I reports the basic facts, section II discusses the rationale of the proposed policy approach, and section III presents the simulated effect of immigration and increased labor force participation on output and investment in a general equilibrium model. Section IV concludes.

32. Job vacancies are at the highest level in 15 years. They are widespread across sectors, and regions, but particularly acute in key production skills (metalworking, mechanical and electrical engineering), and services relevant for human capital development (child care and university teachers), and in the states with the highest growth rates (Baden-Wurttemberg and Bavaria).

33. The available pool of native workers is proving insufficient to fill these vacancies:

35. The current shortages and migration trends are expected to persist. The population is shrinking earlier and aging faster than initially expected, as net migration has been below the natural population growth for the past five years. With fewer workers to hire and fewer consumers with large disposable incomes, firms will have lower incentives to innovate and retain their production facilities in Germany. Offshoring from Germany due to shortages of high-skill labor, as opposed to older motives (cheaper low-skill labor), are already documented (Marin,2004).

36. The best policy mix is a two-pronged approach. First, policies are required to increase the labor supply of the natives. These policies, though with limited potential in the short term as noted above, would move people from unemployment to work and increase the labor force participation. In addition, efforts to retain skilled Germans will be important. Second, given the immediacy of the situation, relaxing some immigration restrictions will help fill vacancies now.

37. The 2007 report commissioned by the Ministry of Economy presents various policy options consistent with this two-pronged approach. These include subsidies to universities (to increase the number of graduates and to attract foreign students), strengthening labor programs for moving people to work from unemployment, retraining and increasing labor force participation, and relaxing immigration restrictions on skilled workers.

38. A key step in formulating policy is to better understand emigration decisions. Currently, little research is being done in this area, and emigration surveys are non existent. In the late 1980s Germany became more open in attracting citizens of German origin living abroad. Also, when the cold war ended, other countries allowed their citizens to leave more freely. Hence, the influx of natives immigrating to Germany increased, peaking in 1991. However, countervailing forces set in thereafter:

39. The acceleration of emigration since 2002 reflects a combination of these factors. As Germany sought to regain competitiveness through labor shedding and wage moderation, the short-run prospects for workers worsened. Emigration increased to the U.K. because of a lower income tax wedge and better employment and wage prospects. Emigration also increased to countries with the same tax wedge, but more dynamic wage and employment prospects (Austria), or a lower tax wedge, but similar employment and wage dynamic prospects (Switzerland).

40. Although improved economic domestic economic prospects may stem emigration, the acceleration since 2002 also has structural elements. First, current emigration of natives is much higher from the West, pointing to structural, rather than temporary factors (one would expect higher emigration from the East, given the higher unemployment rate there). Second, Germany stood out, even in 2001, as the largest European and industrial country experiencing high-skill emigration, without existing historical trends, as in other countries. Moreover, the income tax wedge remains high to support fiscal consolidation in the context of a fast-aging population and large welfare system.

41. Therefore, the government is contemplating relaxing certain immigration restrictions to fill shortages of skilled labor. The Immigration Act approved in 2004 did not attract as many high-skill workers as expected because it set a high threshold for what constitutes high skill (defined as earning € 84,000 a year). Also the Act increased the burden of seeking immigrant workers because it requires job vacancies to be first filled by German or old member state citizens, then by citizens of new member states, and then by other’ areas residents. In addition, Germany retains restrictions against entry of new member states workers of any skill, while other major European countries opened up in 2004 and 2006. As a result, faced with unprecedented high skill labor shortages, and larger vacancies than in past cycles, the authorities are contemplating some changes. The Deputy Interior Minister has indicated the authorities’ intention to open up labor markets for new member states before 2009, when the existing restrictions expire. As of November 1, 2007, engineers from new member states can compete equally for vacancies with euro area nationals. This leaves for resolution the further issue of either defining a lower earnings threshold for defining high-skill labor, or instituting a points system, as the original immigration law draft envisaged, and the proposals for European Commission suggest.

42. While many complex considerations apply in evaluating easier immigration, opening up the borders in Germany will benefit Europe as a whole. Danninger (2007) concludes that a growing Germany is beneficial for Europe. While Germany is facing a potentially more serious labor shortage than other European countries, German efforts to ease skilled-labor immigration will dovetail with broader efforts to attract high-skill labor to Europe. The European Commission is moving in this direction as part of the Lisbon Growth Strategy. Studies that have assessed the impact of immigration from new member states since 2004 (European Commission, 2006; and ECB, 2006) point to beneficial effects on output, and public finances, with neutral effects on wages and employment for countries that relaxed immigration restrictions.

43. An experiment is performed on a baseline describing the German economy to assess the implications of increasing the labor force. We used an extension of the Multimod, a dynamic general equilibrium model incorporating demographics, life-cycle earnings, and savings dynamics, with demographic changes. A detailed description of the model and data used is available in the Appendix (see also Laxton and others,1998, Faruqee,2002, and Faruqee and Laxton,2000). The effect of an increase of the labor force of 100,000 persons each year is simulated (or an annual increase of 0.3 percent). Such an increase can be obtained either by increasing the labor force participation rate or by increasing immigration. While the orders of magnitude of the ultimate effects are similar (see forthcoming working paper), greater immigration increases the size of the population and, to the extent that the immigrants are younger, mitigates the aging problem.

44. An annual net increase in migration of 100,000 adults compared with the baseline—a level reached or exceeded consistently since unification until a few years ago—could raise real GDP by 0.2 percentage point a year. The size of the migration shock was calibrated as follows. We assume that from 2009 until 2011, net migration is increased gradually to 100,000 workers per year (we do not differentiate here between skilled and unskilled labor, but the underlying assumption is that, in keeping with current ratios, about one third of the inflow will be high-skill). What are the effects? With more adults joining the workforce, investment and capital stock will also rise. A virtuous cycle of increase in income and consumption will then follow. The current account will deteriorate initially, but improve later as individuals start saving for retirement and older cohorts become more numerous. These results, while robust to a variety of parameter changes, are sensitive to changes in population projections because output is closely tied to the size of the labor force. The results are, however, model specific, and further refinements will need to allow for differential productivities according to skills, and also if we assume a difference in skills from native workers.

45. In the midst of a strong recovery, Germany is facing shortages of labor, the emigration of high-skilled labor, and a reduction in immigration. Addressing the immediacy of high-skill shortages by relaxing immigration restrictions can help in raising investment and consumption, and potentially improving public finances. Increasing labor participation and improving training further are also necessities, as Germany is expected to age faster than most other countries, and the immigrants may not represent a long-lasting solution. Ultimately, reforming the economy to achieve a higher long-term potential output growth, better employment prospects, and high return to high-skill labor will raise standards of living in a sustainable manner.

We used the middle scenario 1-W1-EJ (constant fertility rate, basic life expectancy, and net migration 100,000). We choose this scenario because in the past three years net migration was below this flow, and there were no improvements in the fertility rate. The model includes adults only, as we are interested in the effect on growth. For steady state, and transition: we use the following population assumptions: for 2051-90 we use World Bank growth rates of the population, and after 2090 we assume constant, slightly positive population growth, to allow the model to converge.

The assumed long-term interest rate is 4 percent, the 10-year bond yield in Germany. The adjustment cost of the capital is 2.0, depreciation rate is 5.5 percent a year, rate of return to capital is 3.0; all widely used assumptions. The labor share of output is 60 percent. The steady state capital-output ratio is 2.5, similar the historical average. The rate of total factor productivity growth is assumed to be constant at 1.1 percent.

Baseline values of growth rate decline from 2.2 percent in 2008 to about 1.0 percent in 2050. These calibrations are consistent with those in other studies.

Earnings distributions relative to the 20-25 cohort, corrected for total population, not actual earners, are presented below. Data display the hump-shaped pattern present in most other economies but have a flatter profile. The fitted earnings are calibrated accordingly (they are the continues line in the figure). 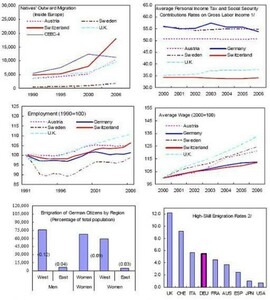 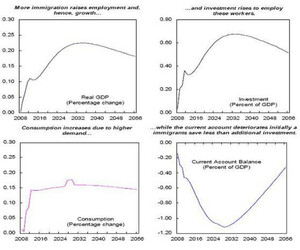 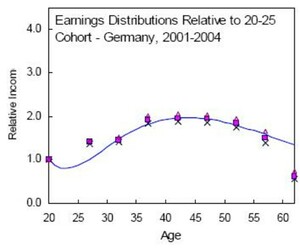