High capital inflows and rising vulnerabilities underscore the importance of a comprehensive approach to ensuring stability. Standard balance sheet indicators mask a substantial build-up of exposures to exchange rate, maturity, and rollover risks. Household balance sheet risks originate from currency mismatches owing to credit euroization. The fiscal balance has a strong and significant impact on the current account in Serbia. The model is broadly able to reproduce recent economic and policy developments in Serbia. The analysis indicates that privatization can result in sizable fiscal savings.

High capital inflows and rising vulnerabilities underscore the importance of a comprehensive approach to ensuring stability. Standard balance sheet indicators mask a substantial build-up of exposures to exchange rate, maturity, and rollover risks. Household balance sheet risks originate from currency mismatches owing to credit euroization. The fiscal balance has a strong and significant impact on the current account in Serbia. The model is broadly able to reproduce recent economic and policy developments in Serbia. The analysis indicates that privatization can result in sizable fiscal savings.

Objective: Explaining the assessment of the level of the dinar real effective exchange rate carried out using CGER-type methodologies

Main results: The REER is found to be overvalued in the range of 5–16 percent. The results are to be taken with caution given the significant uncertainties in the calculations.

52. This chapter lays out the assumptions made in the CGER-type assessments of the dinar real effective exchange rate.25 Two GGER-type methodologies were applied: the macroeconomic balance and the external sustainability approaches. 26 The paper first reviews the way the main data limitations were dealt with. It then explains how the underlying current account was estimated, before discussing the application of each approach to Serbia, and drawing the broad policy implications of the findings.

53. Data limitations are significant in Serbia. In particular, the successive break-up of former Yugoslavia in successor states, including the separation of Montenegro from Serbia in 2006, complicates the availability of reliable long time series. Two series were particularly problematic: remittances and Net External Asset Position (NEAP).

54. The quality of remittances data is inadequate. Remittances have been declining sharply since 2004, dropping from 13 percent of GDP to about 6 percent of GDP in 2007. This made a significant contribution to the widening of the current account over the same period. However, the accuracy of remittances data is not satisfactory, as evidenced by its frequent and ample revisions. For example, the net amount of remittances received during the first half of 2007 was revised upward by almost two percent of GDP between the release of the balance of payment data as of June and as of August. The Central Bank is working on improving the quality of remittances measurement but, in the meantime, assessing the real extent and nature of the recent decline is challenging. In particular, one needs to disentangle what is a measurement issue from what might be an actual, but temporary, decline and what would be an actual and lasting phenomenon. Following discussions with the Central Bank, staff assumed that a large part of the recent decline falls in either of the first two categories, and that remittances would gradually return over the medium-term closer to, but below, their historical average of about 11 percent.

Finally, there is no comprehensive data on foreign debt assets. Staff produced its own NEAP estimates, using stocks where they exist, and approximating stocks as the sum of flows since 1999 (the beginning of the transition period) for other categories where possible. In consultation with the NBS, foreign debt assets were broadly estimated at US$ 2 billion. This produces, of course, only a crude proxy of Serbia’s NEAP, not the least because valuation changes on important categories of assets, such as foreign direct investment (FDI), are not accounted for. At end-2007, the NEAP is projected at -66 percent of GDP.27, 28

56. Estimating the underlying current account -an important part of the assessment of the Real Effective Exchange Rate (REER) level—is difficult in the case of Serbia. The underlying current account is defined as the current account stripped of temporary factors, such as cyclical fluctuations, temporary shocks, and adjustment lags. In a country like Serbia, which is still at an early stage of transition, identifying cyclical fluctuations (or, in other words, defining an output gap) is challenging because these tend to be overshadowed by structural changes.

58. The macroeconomic balance approach assesses the underlying current account against a “norm” consistent with the economy’s fundamental characteristics. As explained in the CGER paper, an econometric relationship between a country’s current account and fundamentals was derived using a panel dataset of 54 advanced and emerging market economies over 1973–2004. The fundamentals include the fiscal balance, the population growth, the population old-age dependency ratio, the initial NEAP, the oil balance, the economic growth and the income level, most of these variables being expressed relatively to trading partners.

59. The estimated current account norm is a deficit close to 4 percent of GDP, and the REER change that would bring the underlying current account to this norm is about 16 percent. The norm was calculated using the above relationship. The fundamentals were expressed in relation to Serbia’s four main trading partners: the European Union, Russia, Bosnia and Herzegovina, and China, which altogether account for about 70 percent of Serbia’s trade.29 Population growth projections for Serbia and its trading partners were obtained from the United Nations’ Population Division. 30 The change in the REER was calculated assuming an elasticity of the current account to the REER estimated at 0.25.

60. The external sustainability approach assesses the underlying current account against the current account that would stabilize the net external asset position at “benchmark” values, given the economy’s potential growth rate, inflation rate, and rates of return on external assets and liabilities.31

61. Defining the appropriate benchmark NEAP in the context of transition is tricky. Experience in the region shows that the maximum NFL position reached by other countries spanned across a wide range. For calibration purposes, two scenarios were run. The first one stabilized NFL at their projected value at end 2007 (66 percent of GDP). The second one allowed for further build up of liabilities. For calibration purposes, the target in this scenario was assumed to be the mid-point between Serbia’s projected 2007 value, and the maximum observed in the region over 1990–2004, which was 100 percent of GDP in Estonia.

62. In Serbia probably more than in most other transition economies, the medium-term growth potential depends on factors outside the economic realm. The pace of productivity gains is a key determinant of medium-term growth potential and will depend heavily on the magnitude of future foreign direct investment. This, in turn, will not only depend on the quality of macro-economic policies, but will also reflect international investors’ assessment of the prospects for an orderly resolution of the Kosovo status issue and Serbia’s accession to the European Union (EU). To illustrate the sensitivity of the external sustainability approach to these uncertain factors, two different assumptions were made regarding the medium-term growth potential. Under the first one, staff’s relatively conservative baseline projection of 5.5 percent was used. Under the second one, with clearer EU prospects, a higher -but plausible—growth rate was assumed, calibrated as the 2003-07 average growth rate for 15 Eastern European countries (6.2 percent).

63. The external sustainability approach also points to an overvaluation of the exchange rate in real terms, but less so than the macroeconomic balance approach. The current account deficit target resulting from the various assumptions is in the range of 5–7 percent, with a corresponding REER adjustment ranging from 5 percent to 12 percent.

64. The REER assessment calls for a rebalancing of economic policies. The results of the macroeconomic balance and external sustainability approaches should be considered with caution given the data limitations and the set of assumptions underpinning them. Nonetheless, they consistently point to the dinar being overvalued in real terms. In staff’s views, this reflects a policy mix which, with insufficiently rapid structural reforms, loose fiscal policy and restrictive monetary policy, has put the current account on an unsustainable path. Therefore, the problem should be addressed at its roots: structural reforms should be accelerated and fiscal policy tightened, which would make room for a less restrictive monetary policy. This would contribute to reducing the current account deficit, bringing it more in line with fundamentals.

For a full description of the macroeconomic and external sustainability approaches, including the definition of variables and econometric coefficients, see Methodology for CGER Exchange Rate Assessments.

For an in-depth discussion on how to build NEAP data, see Lane and Milesi-Ferretti (2006).

Since the NEAP is negative, its absolute value is also referred to as Net Foreign Liabilities (NFL) position.

The fifth most important trading partner is Montenegro, for which not all required data was readily available.

In the case of Serbia, due to the lack of reliable data, the rates of return of assets and liabilities were assumed to be the same. 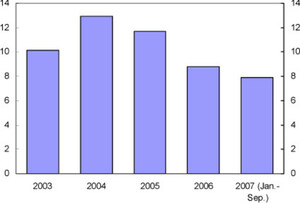 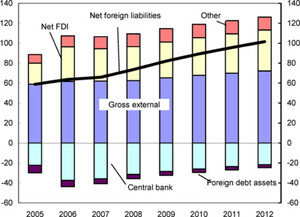 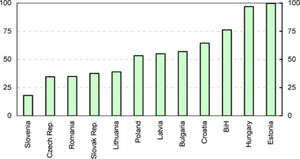 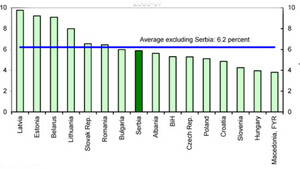