This paper examines the inflation expectations, monetary policy credibility, and dollarization. Country fundamentals have explained variation in sovereign spreads, but external factors play an important role. This paper assesses the role of and prospects for bank-lending from a cyclical and structural perspectives. A model calibrated for Uruguay, a financially dollarized economy, suggests that reserves are nearing optimal prudential levels. The results of a modified Merton framework, applied to the case of the Uruguayan banking system, appear to be promising for countries without equity markets.

This paper examines the inflation expectations, monetary policy credibility, and dollarization. Country fundamentals have explained variation in sovereign spreads, but external factors play an important role. This paper assesses the role of and prospects for bank-lending from a cyclical and structural perspectives. A model calibrated for Uruguay, a financially dollarized economy, suggests that reserves are nearing optimal prudential levels. The results of a modified Merton framework, applied to the case of the Uruguayan banking system, appear to be promising for countries without equity markets.

VI. Has the Financial System Become More Resilient to Shocks? An Analysis Adapting the Merton Framework to a Country without Equity Market Data

1. Following substantial restructuring and enhanced supervision in the aftermath of the 2002 crisis, financial sector soundness indicators have strengthened considerably. The banking system is now profitable and has become better capitalized. It is also highly liquid, though this partly reflects a sharp reduction in lending. Nonperforming loans have fallen to 2 percent of total loans (excluding the housing bank) and non resident deposits, which proved volatile in the face of negative external developments, are well below pre-crisis levels. In addition, the regulation and supervision of the financial system has improved significantly. However, despite low short-term risks, important medium term vulnerabilities remain, particularly stemming from high dollarization (see also FSAP 2006).

2. This paper assesses the extent of remaining vulnerabilities of the banking sector using a variant of the Merton framework (1973, 1974). To this end, the study constructs a set of credit risk indicators, which are then used to compare banks' risk profile at the time of the 2002 banking crisis with today's conditions, and examines the impact of potential shocks on the various risk indicators. In contrast to the Merton framework, which uses market data to capture the collective views and expectations of market participants, this paper uses book value data from balance sheets due to the absence of market data in Uruguay. The approach still incorporates volatility into the estimations, a key feature of the Merton framework for capturing non-linearities in the credit risk indicators, especially during periods of distress.

3. Despite the simplifying assumptions, the methodology captures well several stylized facts of the 2002 banking crisis and suggests that the system has become more resilient. In particular, it identifies, as early as the first quarter of 2002, a deterioration in the credit risk indicators of the banking sector and, when applied to the corporate sector, a significant distress event toward the last quarter of 2002. The methodology also points to a substantial improvement in credit risk indicators since the 2002 crisis, in line with the restructuring process pursued over the last years. Consistent with the conclusions of the stress tests of the 2006 FSAP and the 2007 update prepared by the authorities, it shows that, notwithstanding important remaining vulnerabilities, banks have become more resilient to shocks. Thus, the methodology used in this paper appears to have the potential of being a useful toolkit to many economies that lack (or have shallow) equity markets.

B. The Merton Framework

4. The Merton framework offers clear advantages over traditional vulnerability analyses, including by incorporating volatility explicitly into the estimations.1 The approach relies on observable market information on the value and volatility of liabilities (and equity) to derive the value of non-observable quantities, such as the asset value and asset volatility. This information is then combined to estimate risk indicators, such as the distance-to-distress (a measure of how far a firm is from defaulting), default probability, credit spread, and expected losses given a default. In contrast with more traditional vulnerability analyses, this framework incorporates market volatility when estimating credit risk. Volatility is crucial in capturing nonlinear changes in risk, especially during times of stress when small shocks can gain momentum and trigger systemic repercussions.

5. The basic idea is to model a firm's equity as a (junior) contingent claim on the residual value of its assets. In the event of default, all the firm's assets are used to pay the senior stake holders (e.g., debt holders); otherwise equity holders receive the difference between the value of assets and debt. Thus, the equity of the firm can be seen as a call option on the residual value of the firm's assets. This framework enables a rich characterization of a firm's (or sovereign's) balance sheet and the derivation of several credit risk indicators (e.g., distance to distress, default probability, and credit spreads) (Figure 1).

6. With information on the market value and volatility of equity and the value of debt, it is possible to estimate the implied value for assets and volatility through the Black and Scholes option formula. Firms are assumed to default whenever the value of assets fall below a given “distress” barrier. It is then possible to estimate a set of credit risk indicators, including distance-to-distress, default probability, credit spread, and expected losses in the event of default.2

7. Given the lack of an equity market in Uruguay, this study incorporates volatility into the estimation of credit risk indicators by using book value data. While this reduces to some extent its forward-looking nature, the approach still retains key characteristics, such as proper analysis of asset volatility. Moreover, balance sheet data appears to capture well changes in the financial health of Uruguayan banks during the sample period, without particularly long lags.

8. This section summarizes the main results of stress tests conducted by the 2006 FSAP and updated by the authorities in 2007. It then assesses whether the banking system has become more resilient since the 2006 FSAP.

9. The 2006 FSAP stress tests focused on the impact of shocks on banks' capital adequacy (CAR) and liquidity ratios.3 The institutions included all private banks, cooperatives, finance companies, offshore banks, and the state owned Banco de la República Oriental del Uruguay (BROU); these institutions represented 80 percent of the financial system assets. The stress tests were performed on exposures, on a bank-by-bank basis, as of June 2005. They included sensitivity analysis with respect to the interest rate, exchange rate, and credit risk, as well as macroeconomic scenarios involving a domestic supply shock (severe weather conditions), a current account shock (corresponding to a drop in Argentine GDP of 10 percent), and a capital account shock (corresponding to a rise in the three-month Libor to seven percent per year) (Table 1).

GDP gap where long-term GDP growth is equal to 3 percent.

The country risk was calibrated according to similar historical episodes.

GDP gap where long-term GDP growth is equal to 3 percent.

The country risk was calibrated according to similar historical episodes.

12. This section uses the modified Merton framework to assess whether credit risk indicators capture well the main stylized facts of the 2002 banking crisis and the ensuing recovery. Also, the framework is used to estimate the impact of current and capital account shocks, replicating those defined in the stress tests, in an effort to incorporate volatility as an additional dimension to these tests, which rely only on assets and liabilities levels.

13. To estimate credit risk indicators, it is key to adjust balance sheet data to better reflect underlying values and volatilities.4 First, beyond the deterioration in assets reflected through provisions, the data was adjusted by the expected losses arising from companies facing the same shocks. Second, the data was adjusted to take into account the liquidity/capital support provided during the 2002 crisis (US$2.4 billion), which was masking the decrease in total assets value and volatility in the published financial statements (Table 2).

14. The expected losses from the corporate sector were estimated using the modified Merton framework. Despite the limitations of the methodology (see appendix for the technical details), the results appear to be in line with the stylized facts: in 2002, there was an increase in expected losses from companies that defaulted, owing partially to a higher volatility of total assets; in subsequent years, once the volatility of assets declined and the balance sheet accounts improved, expected losses returned to the pre-crisis levels (Figure 4).5

17. The modified Merton framework can be used to simulate the impact of potential shocks on the EDF. This simulation provides a basis to assess the strength of the improved risk indicators beyond the traditional stress tests. In particular, given that volatility is a key parameter of the EDF, the near zero probability of default is to a large extent the result of the currently low volatility environment. Since standard stress tests only provide information on banks' assets and liabilities levels following shocks, this paper simulates assets' volatilities consistent with the after-shock level of assets. For this purpose, a historical relationship between total assets and their volatility is constructed for all banks to estimate the after-shock assets' volatilities (Figure 6).

19. The results of a modified Merton framework, applied to the case of the Uruguayan banking system, appear to be promising for countries without equity markets. While the methodology is based on balance sheet information, and not on market valuations, the time series for the estimated asset volatilities and default probabilities seem quite sensible. Indeed, they track well the deterioration of the system during the 2002 crisis. The modified Merton framework also proves useful to simulate the effects on individual banks of possible changes in macroeconomic conditions—and, by incorporating volatility into the analysis, improves upon conventional stress tests that rely only on asset and liability levels.

20. While still significant, the analysis suggests that vulnerabilities have continued to decline, further confirming the FSAP stress tests results. The estimated default probability reaches only half the level measured at the peak of the 2002 crisis, even under a substantial shock to the capital account; and the impact of a shock to the current account is even smaller. The results also show, however, that important vulnerabilities remain. Thus, it will be essential to continue deepening financial sector reforms over the medium-term.

See Gapen et al. (2004, 2005) and Dale and Jones (2006) for examples of application of the Merton framework to government, banking, and corporate sectors' balance sheets.

For more details on the stress tests' assumptions, see Appendix 2 of the Uruguay FSSA, February 2006.

A capital injection to the banking system, for example, would mask the real volatility in the assets being depleted to meet the deposit withdrawals from a deposit run.

The sample of firms used to construct a time series on total assets and estimate their volatility is taken from De Brun et al (2006) and covers the period 1995–2005.

This is not surprising since the results from the stress tests are used to shock the modified Merton framework.

See Hull (2000) for the precise formulae and definition.

Expected losses given default in the corporate sector.

The relationship between assets and assets' volatility in Uruguay

The default probability for the banking sector has stabilized since 2002 and remains at lower levels even when facing significant shocks. 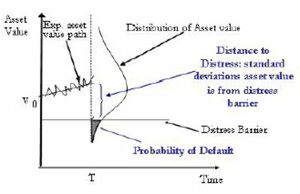 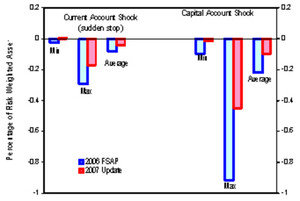 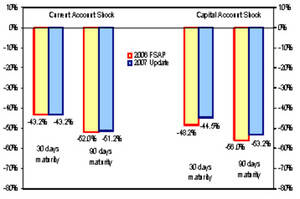 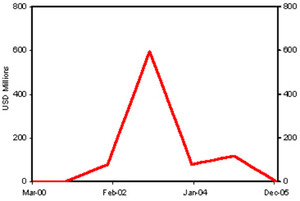 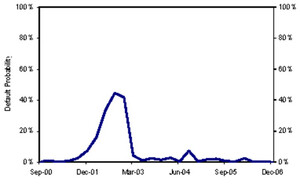 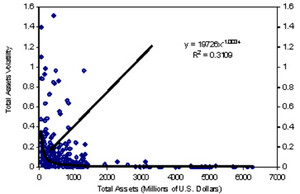 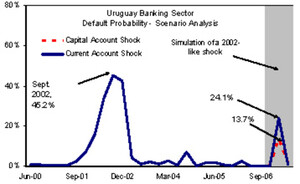 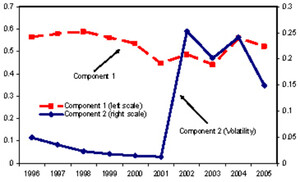 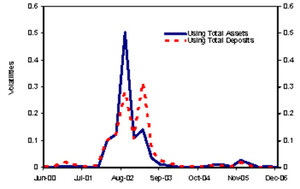