This Selected Issues paper on Turkey reviews a decline in private saving and adoption of a fiscal rule. As economic confidence has improved, capital inflows have surged while private saving has fallen. Together, these developments have produced current account deficits and a strong lira, raising concerns that Turkey may be exposed to sudden reversals in investor sentiment. A fiscal rule with appropriate mechanisms to monitor its compliance should deliver predictable policies, thus allowing further reductions in debt and risk premiums, thereby contributing to macroeconomic stability.

This Selected Issues paper on Turkey reviews a decline in private saving and adoption of a fiscal rule. As economic confidence has improved, capital inflows have surged while private saving has fallen. Together, these developments have produced current account deficits and a strong lira, raising concerns that Turkey may be exposed to sudden reversals in investor sentiment. A fiscal rule with appropriate mechanisms to monitor its compliance should deliver predictable policies, thus allowing further reductions in debt and risk premiums, thereby contributing to macroeconomic stability.

1. Turkey recently passed important new mortgage market legislation. The new law improves, and in part liberalizes, the regulatory infrastructure for the origination of loans. It strengthens the legal protection of mortgages and, at the same, widens the range of permitted instruments (adjustable interest rate mortgages). Importantly, it also establishes the framework for a secondary market, providing mortgage lenders with new funding options via the pooling and securitization of mortgage-backed loans (Box 1).

2. This chapter analyzes how the emerging mortgage market may affect Turkey’s economy. The international experience shows that mortgage finance not only plays an important role in the functioning of housing markets, but can also affect a country’s financial and overall economic performance. Mortgage markets can support long-term growth, but they can also reinforce cyclicality and possibly contribute to swings in asset prices. This implies new challenges for policymakers and financial regulators.

3. The international experience suggests that Turkey’s mortgage market could expand rapidly if macroeconomic stability and low inflation become entrenched. There are many country examples where the liberalization, or introduction of mortgage legislation, combined with favorable macroeconomic and certain other conditions have led to rapid mortgage market growth (Box 2). All the factors that seem relevant for such growth could also come into play in Turkey:

4. A mortgage market can foster the development of the financial sector and raise economic growth.2 Mortgages not only permit extending larger, longer-term lending but also expand lenders’ funding options and allow a re-allocation of risks through the securitization of mortgage loans. If supported by reforms that promote the domestic demand for long-term debt—the development of private pension funds, for example—mortgage-linked debt instruments can become the basis for deeper capital markets.

7. Mortgage lending, house prices, and economic cycles are closely correlated in many economies. Research for industrialized countries shows household consumption to be significantly influenced by house price developments. Moreover, house prices have become increasingly correlated with mortgage lending activity, as mortgage markets were liberalized.6 Because households can use their housing wealth as a basis for borrowing, changes in house prices may affect consumption not only by changing households’ wealth, but also by raising their capacity to borrow. Empirical evidence largely supports the presence of a wealth effect on consumption (Campbell and Cocco, 2005). A consumption-driven expansion of domestic demand may itself feed back into rising house prices. As a result, in most developed countries house prices and mortgage lending are closely correlated with economic cycles—and at times have been associated with overheating followed by recessions.7

8. How these effects could play out in Turkey depends critically on the potential magnitude of house price increases and the strength with which these would affect households’ behavior.

9. while these effects will take time to be fully felt, it is important for policymakers to follow them from the start. For example, based on past data, Binay and Salman (2004) estimate a correlation of private consumption with real estate wealth of 0.2 percent. This correlation may rise, as Turkey’s mortgage market grows. Similar calculations for OECD countries show this correlation coefficient at 0.58 percent on average. It reaches over 0.8 percent in countries where mortgage access is easy, loan-to-value ratios are high, downpayments low, ARMs widespread, and home equity withdrawal products common.

10. Higher household mortgage indebtedness, in particular at adjustable rates, can significantly impact monetary policy transmission. Households with high ARM debt become more sensitive to changes in interest rates. Rising interest rates will not only raise their immediate debt service costs, but also reduce their perceived wealth position as higher interest rates put downward pressure on house prices. This increased sensitivity could boost the potency of monetary policy to counter cycles. If FRMs present the larger share in household debt, interest rate policy still has an effect, because households try to refinance their FRM when interest rates fall. The maximum refinancing fee permitted under Turkey’s new mortgage law is 2 percent of the remaining debt under loans. This is still considered to be low and may not deter refinancing in the case of declining interest rates (Debelle, 2004).

11. Also, a housing boom funded by foreign savings would further complicate the difficult question of how to respond to capital inflows. This involves the issue of central bank intervention and sterilization in the face of a large current account deficit and above-target inflation. While the issue is not new in that it applies to capital inflows in general, a foreign financed mortgage boom could amplify existing pressures, adding real estate as a new asset class for foreign investors.

12. The growth of a mortgage market brings important new challenges for financial regulation and supervision. In the extreme, the above-described effects can take the form of excessive asset price valuations, which fuel unsustainable lending booms based on inflated real estate collateral. Indeed, the liberalization of domestic financial markets, increased competition and the emergence of new financial institutions—without an accompanying strengthening of regulations and supervision—have been common factors behind financial crises in other emerging and industrialized economies (Hilbers et al., 2001).

13. Therefore, the new mortgage law must be supplemented with sound sub-regulations and the supervisory responsibilities must be defined clearly. To ensure that the new law’s principles are effective in practice, further specificity must be provided through sub-regulations (e.g., on the appraisal process and profession, pre-contractual information for consumers, and procedures for refinancing and prepayments). Moreover, the supervisory responsibilities between the Capital Markets Board (CMB) and the BRSA must be made clear. The law establishes that the BRSA will supervise primary lending and is in charge of consolidated supervision, while the CMB takes charge of secondary lending, including the licensing of the new mortgage finance corporations. This shared supervisory responsibility requires close cooperation, although it must always be clear which agency is ultimately responsible in any problem case.

14. Developments in some transition economies exemplify the challenges posed by rapid changes in mortgage markets. In most transition economies, mortgage lending started off with small-size, local-currency bank loans, mainly for housing purposes. However, strong economic performance combined with positive confidence effects of EU accession (including prospects of Euro adoption) and the entry of foreign banks, have given rise to dramatic changes in the mortgage market: wider range of loan purposes, higher loan-to-value ratios, foreign currency mortgages, and new loan distribution channels. While in principle beneficial to consumers, some of these developments have started to raise concerns among regulators. Turkey can learn from these experiences and avoid some undesirable developments (such as, the fast spread of mortgages in foreign currency).

15. collection of the relevant data is a prerequisite for effective supervision. To further research and monitor the effects discussed in this chapter, it is crucial to have access to relevant data, in particular house prices. Research for many countries has clearly recognized house prices as a key indicator for demand pressures. Yet, availability of adequate data is also identified as an important area where further efforts are necessary, including in more advanced economies.12 Reported efforts to start collecting Turkish house price data in a systematic way are, therefore, welcome and deserve continued attention and resources.

Improvements in the regulatory infrastructure for the primary market (loan origination).

In the 1980s, a wave of mortgage market liberalization led to a fast expansion of lending. Industrialized countries’ efforts to liberalize financial markets in the 1980s eliminated many of the restrictions that previously limited the scope of mortgage lending (e.g., regulations with respect to the terms and conditions of loans as well as to lenders’ funding capacities). This expanded the scope to use housing wealth as a basis for mortgage lending. At the same time, many countries made successful efforts to reduce inflation from the elevated levels reached in the 1970s, which also brought down long-term interest rates. In this environment, mortgage lending soared, causing house prices to rise.1

EU accession added further impetus in some countries. Joining the EU in 1986 significantly changed the prospects for future macroeconomic and political stability in Spain. In addition to lower inflation and declining interest rates (in particular after the launch of the EMU), Spain also experienced relatively higher growth in the process of converging with the richer EU members. Mortgage lending soared in the 1990s after being negligible until the early 1980s.2

Many of the transition economies, which became EU member states in 2004 (and 2007), are experiencing mortgage market booms. Most of these countries had introduced mortgage legislation as part of their transition to market economies. As the economies stabilized, for which the EU accession process provided an important anchor, the combination of falling interest rates, households’ rising disposable income, a growing banking sector fueled by foreign capital, and large demand for better housing, drove mortgage lending higher. As in other cases, this was also associated with strong house price increases.3

At their lowest, monthly interest rates for a 10-year lira loan came down to about 1 percent.

For example, for lenders to securitize their mortgage loans, the underlying housing collateral must fulfill regulatory license requirements.

Co-movements in property prices and mortgage borrowing were comparatively weak in the 1970s but have become stronger in the 1980s and 1990s (OECD, 2000).

Housing equity withdrawal is defined as the amount by which the net increment in a household’s mortgage debt exceeds the household’s residential investment.

These structural differences are very significant also in developed markets. As a result, changes in housing wealth strongly affect household consumption in countries like Australia, Canada, the Netherlands, the United Kingdom and the Unites States, but have relatively little impact in France, Germany, Italy and Japan (OECD, 2004).

In contrast, countries with well-developed markets for covered bonds or mortgage-backed securities have a high proportion of FRMs (e.g., the United States, Germany, Denmark). See IMF (2004) and OECD (2004).

For instance, see recommendations by the BIS—Committee on the Global Financial System (2006). 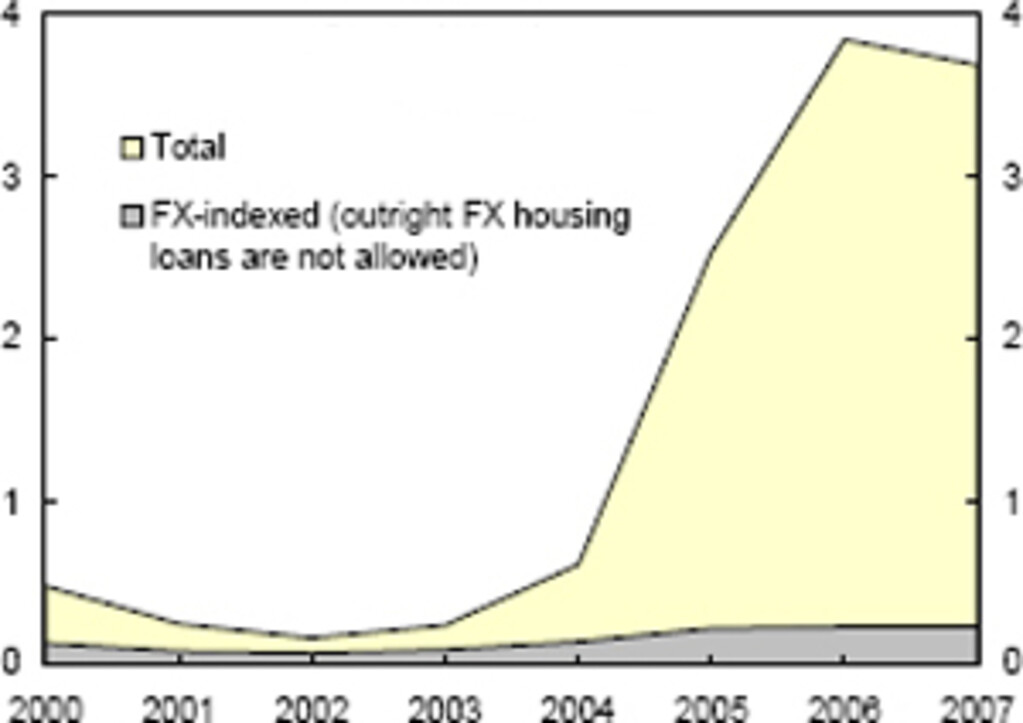 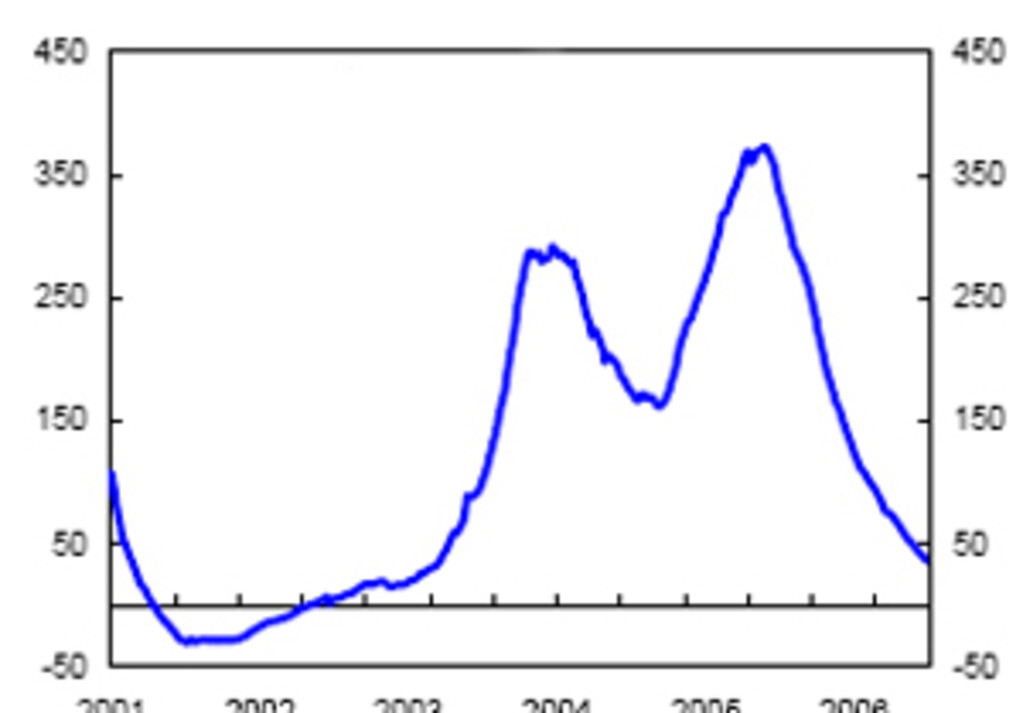 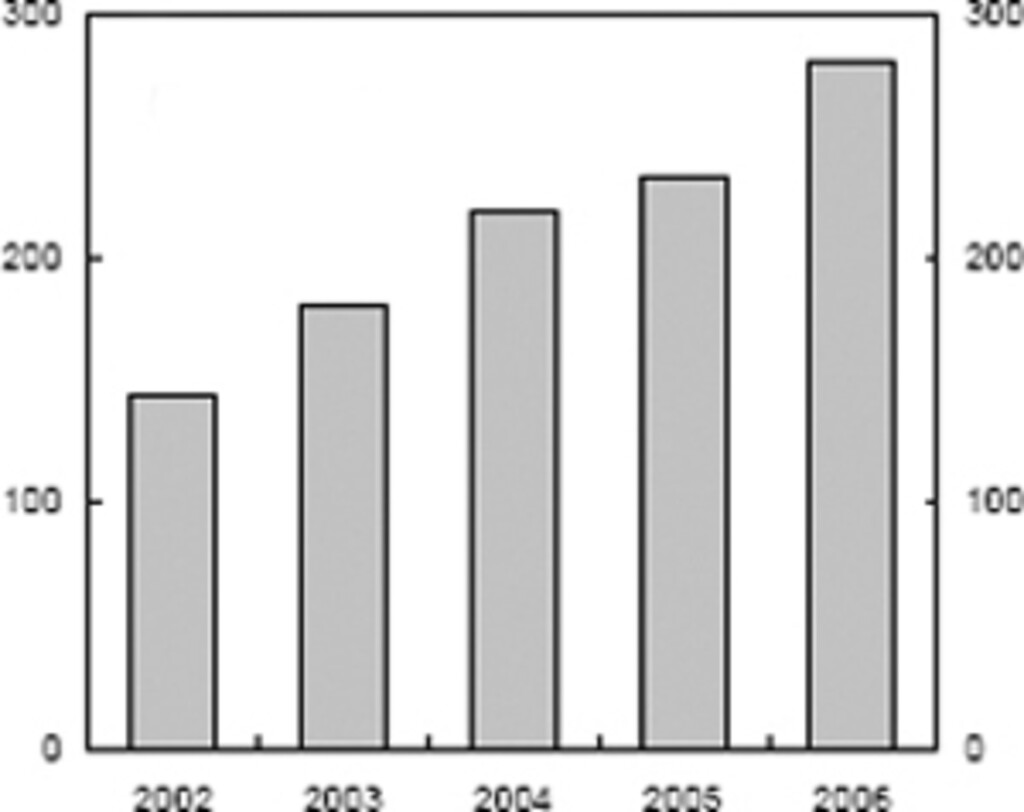 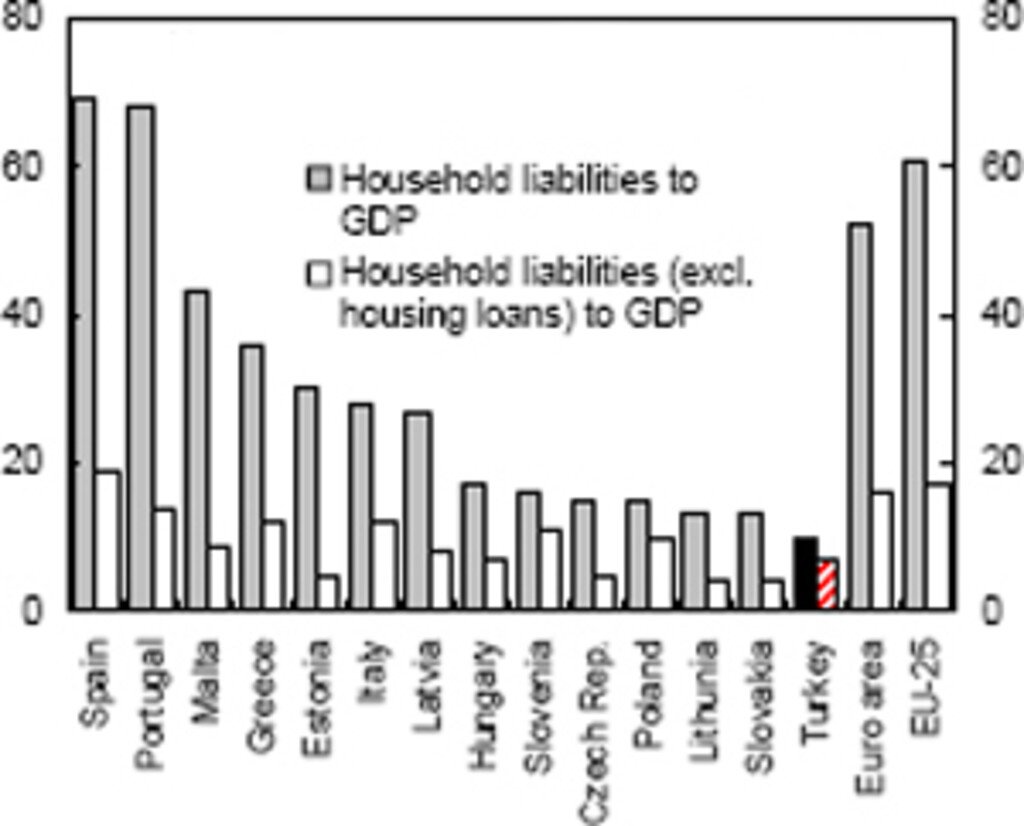 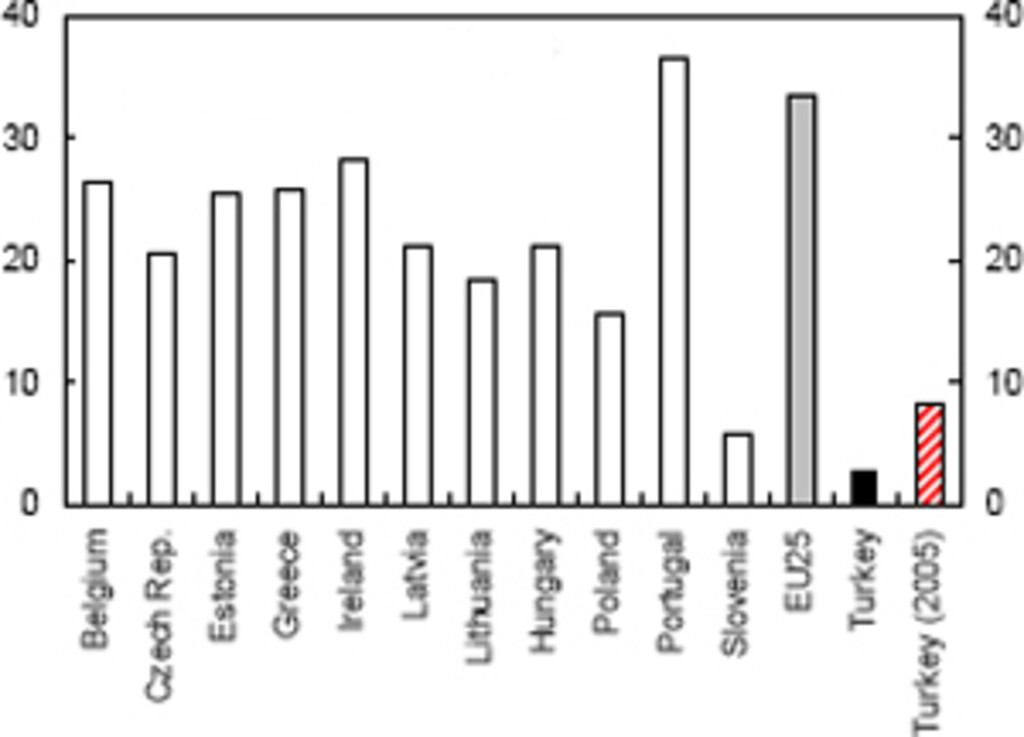 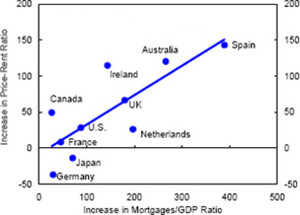 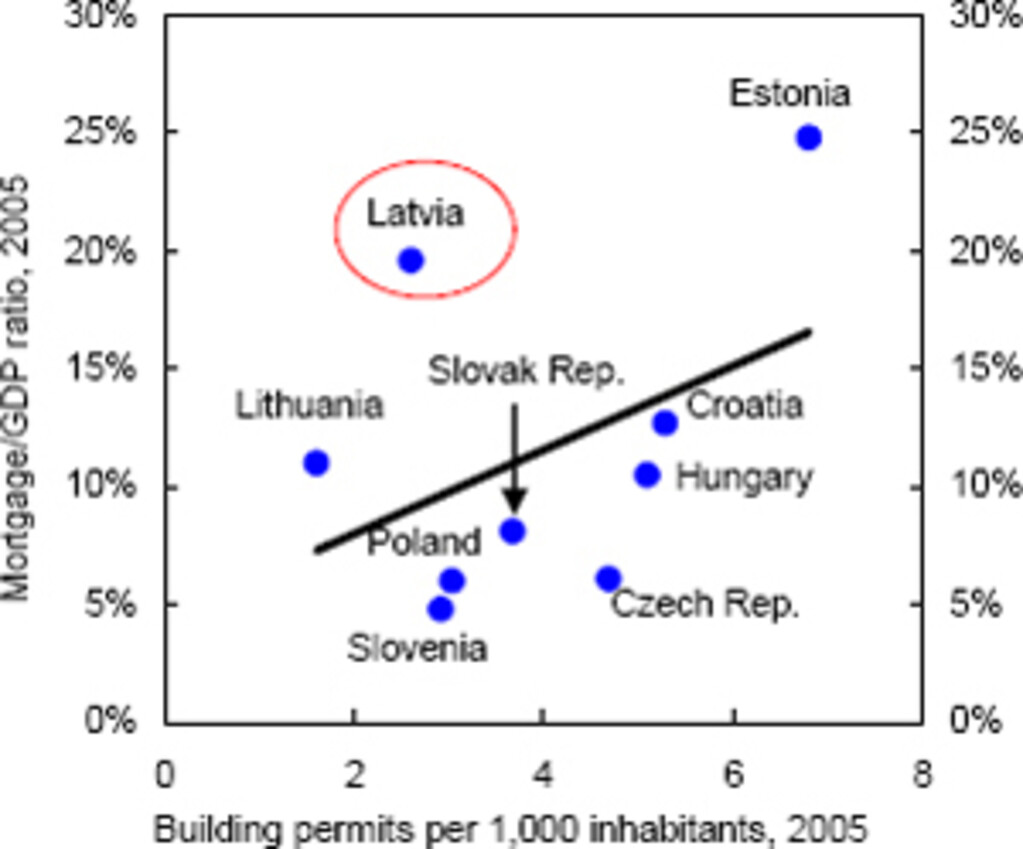 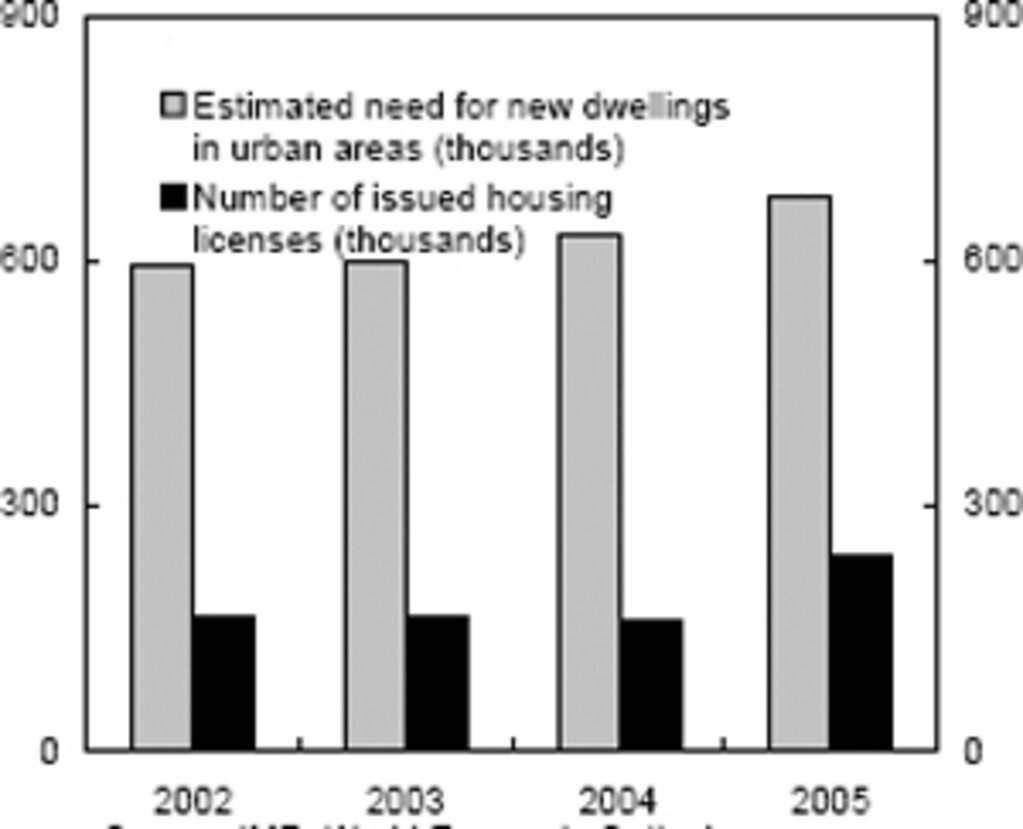 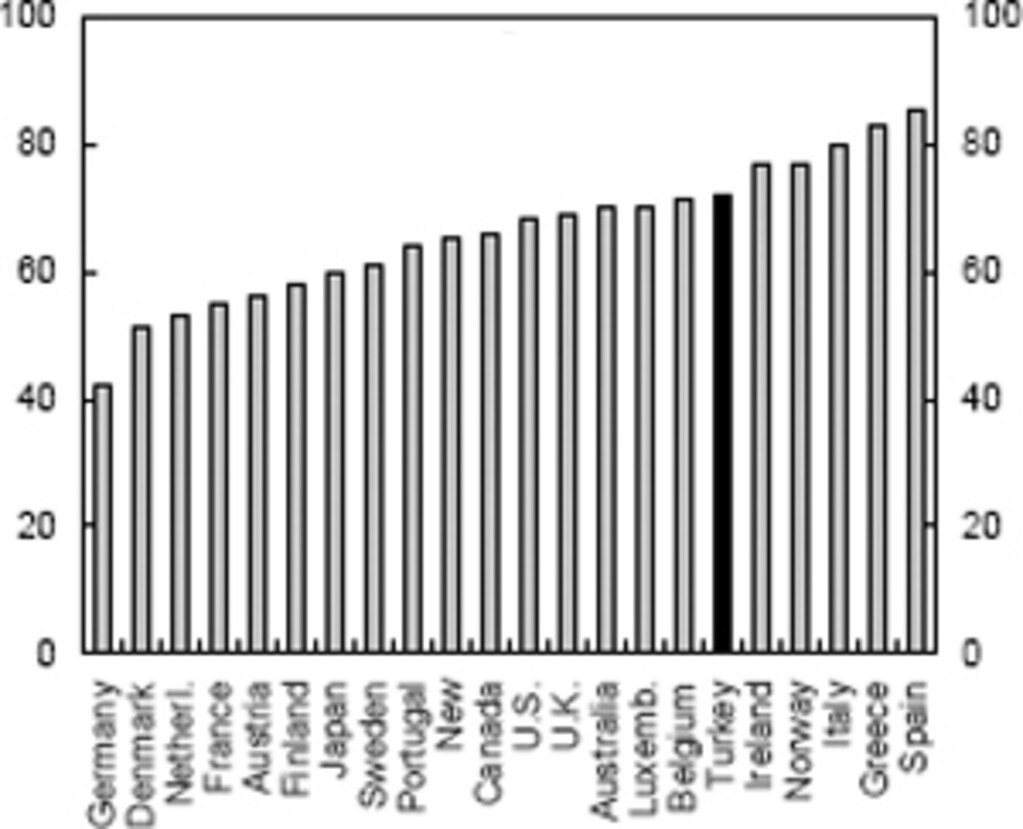 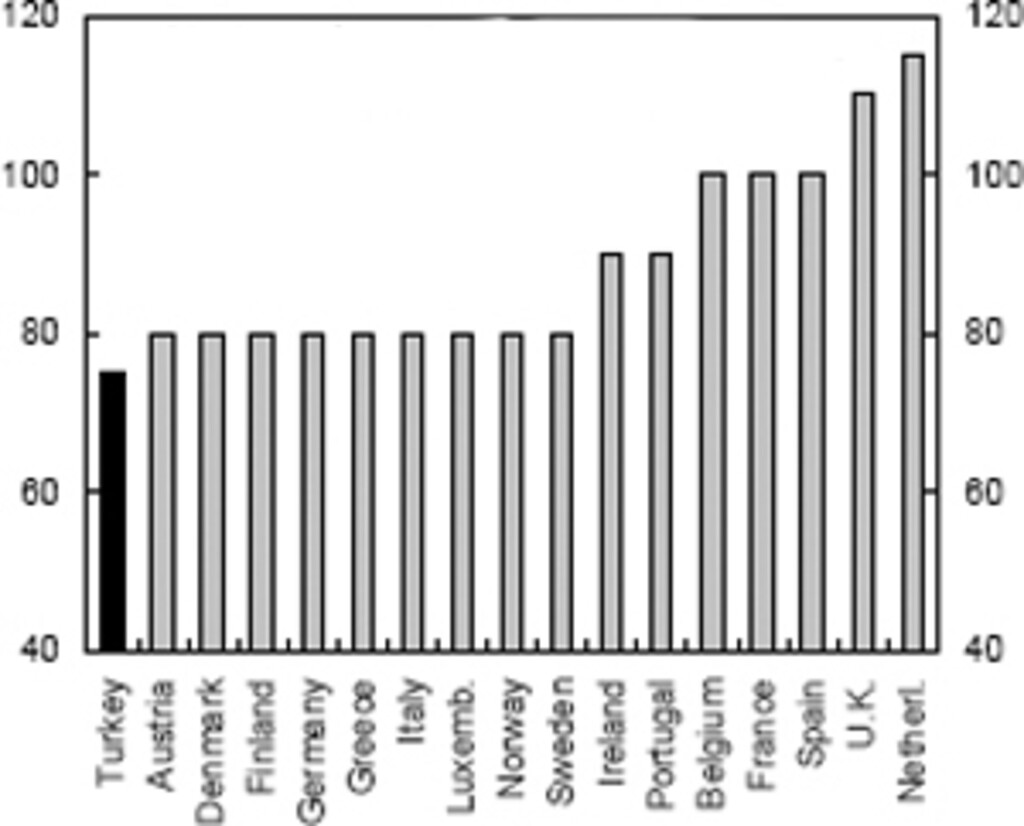 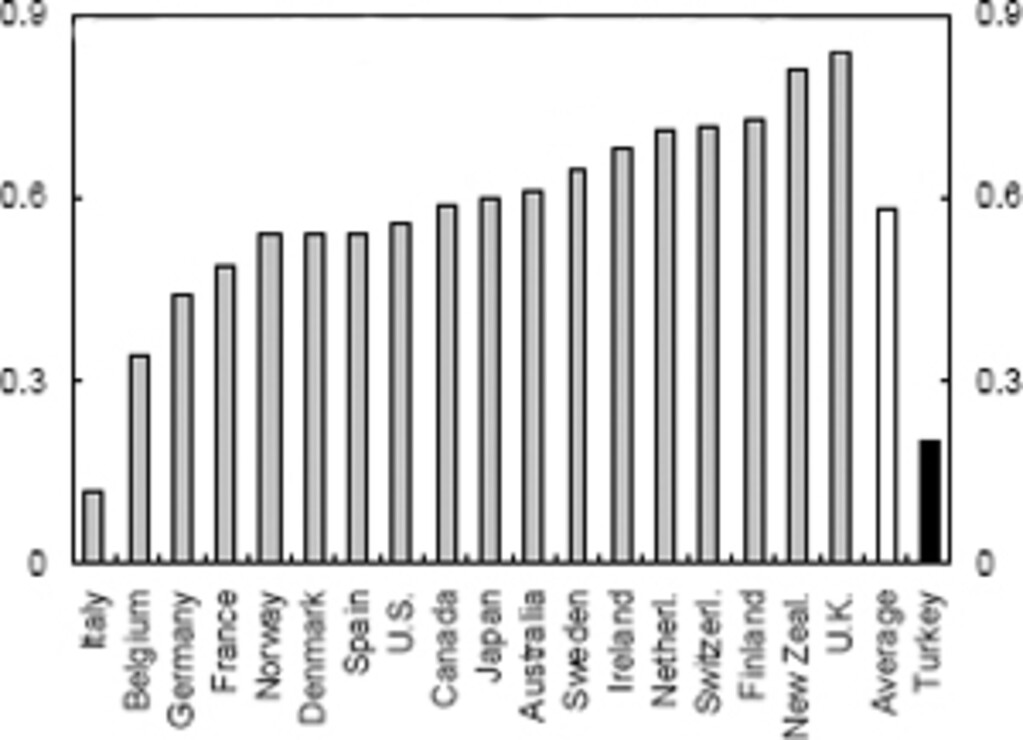 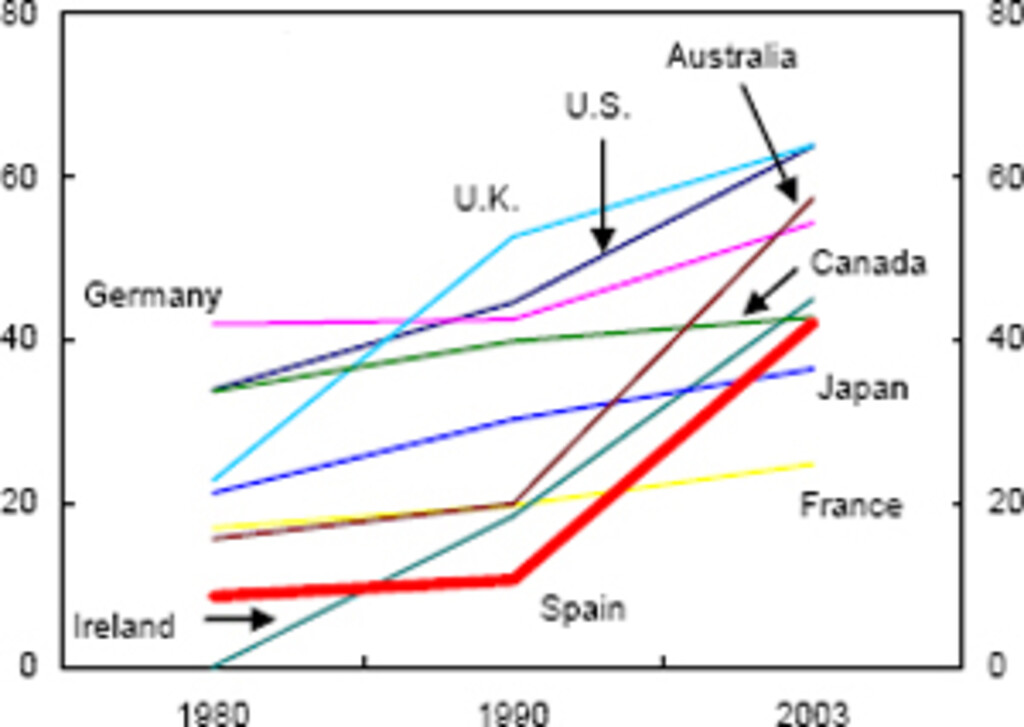 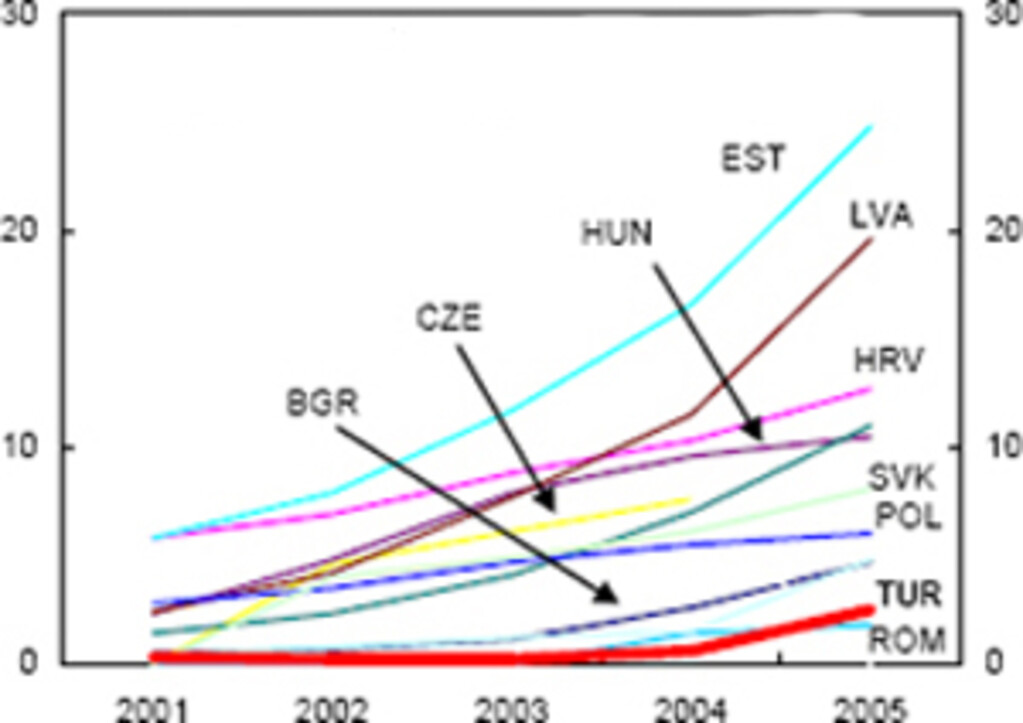