This Selected Issues paper analyzes Portugal’s export performance in 2006 and assesses whether it might augur a sustained recovery. The paper examines the factors underlying the recent export rebound, and searches for signs of fundamental changes in structures of the export industries during the last decade. It highlights the importance of labor market flexibility. Using a four-country version of the IMF Global Economic Model, the paper attempts to illustrate the benefits of labor market reform to help close the competitiveness gap.

This Selected Issues paper analyzes Portugal’s export performance in 2006 and assesses whether it might augur a sustained recovery. The paper examines the factors underlying the recent export rebound, and searches for signs of fundamental changes in structures of the export industries during the last decade. It highlights the importance of labor market flexibility. Using a four-country version of the IMF Global Economic Model, the paper attempts to illustrate the benefits of labor market reform to help close the competitiveness gap.

Objective: To understand Portugal’s export performance in 2006 and assess whether it might augur a sustained recovery.

Results: The strong rebound of Portugal’s exports in 2006 was led by external demand. While the structure of the export sector is changing, it does not appear enough to eliminate the competitiveness gap for the whole sector.

Policy implications: As external demand is forecast to remain robust, a gradual recovery of exports is likely, but export market shares seems unlikely to be regained without significant gains in cost competitiveness.

1. Following several years of dismal performance, Portugal’s exports rebounded strongly in 2006. During the 1990s, rapid productivity growth in Portugal’s export sector led to an export boom, contributing to the impressive economic performance in the run-up to euro adoption. However, the export sector ran into serious trouble since the early 2000s, as competitiveness was eroded with rapidly rising unit labor costs (ULC), and market shares were lost to Asian countries with similar export structures and very low wage costs. As a result, Portugal’s export performance suffered during this period, growing at an average rate of 2.5 percent a year in real terms. Thus it was surprising to many observers that exports registered near 9 percent growth in 2006, and such performance continued into the first few months of 2007.

2. Will this rebound last? The answer will have profound implications for the growth outlook in the near to medium term. This chapter aims to provide evidence to make such an assessment, first by examining the factors underlying the recent export rebound, and second by searching for signs of fundamental changes in the structures of the export industries during the last decade.

B. What Explains the Export Rebound since 2006?

4. The demand-driven export boom in 2006 appeared to be a widespread phenomenon. Many countries in the European Union (EU) experienced high export growth in 2006. In particular, countries such as Greece, Italy, and Spain, which had experienced a similar export slowdown in the early 2000s, also had a strong export rebound in 2006.

5. In 2006, growth of merchandise exports was mainly driven by machinery, transportation equipment, manufactured materials, and crude materials to Spain, Germany, U.S., Angola, and Singapore. Spain remained the largest export market for Portugal, accounting for 4.2 percentage points out of 12½ percent total increase of Portugal’s merchandise exports (in nominal terms). However, newer markets such as Angola and Singapore also contributed significantly to the export growth.

6. Service exports enjoyed similar buoyancies, rising by 15.4 percent in nominal terms in 2006. Tourism and transportation contributed to over half of total growth. Other service exports, such as construction, communication, services in trade, leasing, legal work, and agriculture, accounted for the rest of the service growth.

7. Portugal’s price competitiveness has not improved in recent years. Both CPI and ULC based real effective exchange rates showed moderate appreciation in 2006, and various indicators of external competitiveness still point to a gap of 10–20 percent.2 On the other hand, the export margin, as calculated by dividing the deflator of exports of goods by the ULC in manufacturing, appeared to have started rising since 2004.

8. Significant changes to the structure of Portugal’s exports have taken place since the mid-1990s. Reflecting the increasing dominance of Asian countries in the sector, the share of textile and footwear exports continues to shrink. On the other hand, shares of machinery and transport equipment, chemicals, materials, and refined fuels have been expanding.

10. Such a shift in the export structure has also seen employment trends of the various sectors of manufacturing. While total employment has declined in the economic slowdown, the reduction in the traditional sectors has been particularly significant.

11. Portugal’s merchandise exports have diversified into markets outside the EU. Although the share of exports to EU countries had accounted for about 80 percent of Portugal’s total merchandise exports for many years, in 2006 this share dropped somewhat, as exports to U.S., Angola and Singapore etc., expanded rapidly. It remains to be seen whether this signifies a new trend. Compared to other EU countries, Portugal’s share in intra-EU exports continued to dwindle. However, Portugal’s share, compared to other EU countries, holds up surprisingly well in extra-EU exports despite the recent economic slowdown, and Portugal has been able to expand the share gradually.

12. The structure of service exports remains largely unchanged. Tourism and transportation are the largest sectors in service trade. Overall service exports are somewhat less volatile than merchandise exports, and should play an important role in sustaining export growth.

13. Investment in the export industries, in particular FDI, will play a critical role in fostering productivity growth and export recovery. Business fixed investment dwindled since 2001, but in 2006 it started to grow again, rising by 3 percent. FDI slowed in 2004 and 2005, but recovered in 2006. FDI inflow in terms of GDP is about average within the euro area, but lags new EU members. Data from the Portuguese Investment Agency (API) show that large investment projects have been established in a wide range of sectors, including those of automobile, pulp and paper, and ceramic and glass, electric and electronic equipment, food, and tourism. About 40 percent of FDI signed via API are related to the automobile sector, and 8 percent is related to electronic equipment. It is likely these will be the sectors leading export growth in the medium term.

14. The rebound of Portugal’s exports in 2006 took place again a background of a global export surge, led by strong demand. Unlike in previous years, Portugal did not lose market share. But the economy’s competitiveness gap still exists.

15. Changes in Portugal’s export sectors are taking place, although it would be premature to project a sustained recovery at this point. Signs are mixed. On one hand, external demand is strong, Portugal’s exports are moving up the technology chain, and investment is recovering. On the other hand, the export rebound has just unfolded for one full year, similar recoveries have fizzled out, and the changes already taking place in some “pockets” of export industries do not seem to have resulted in a fundamental shift of the whole sector in terms of competitiveness. Thus while Portugal’s exports are likely to be buoyed by continuing global demand, export market shares seems unlikely to be regained.

For example, the establishment of a Volkswagen plant in Portugal has led to increasing vehicle exports. In 2006, 98 percent of vehicles made in the Volkswagen plant were for export to destinations such as Germany, UK, Australia, Spain, France, and Italy.

Contributions to Export Growth in 2006 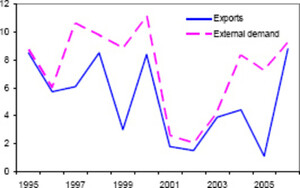 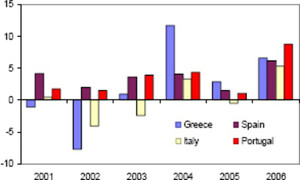 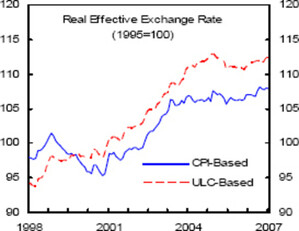 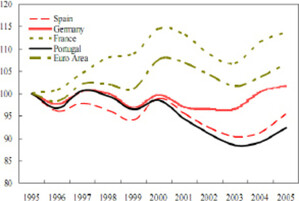 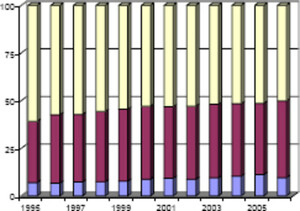 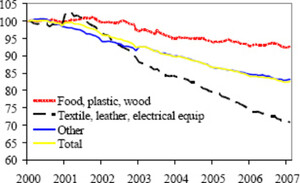 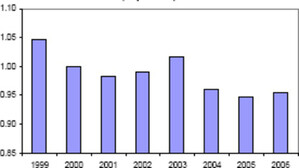 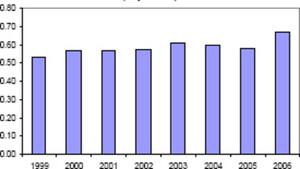 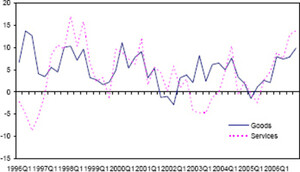