The size and sources of international spillovers of activity remain subject to significant uncertainty. This Selected Issues paper uses a new approach to differentiating these effects using disturbances to a diverse group of small industrial countries as a proxy for global shocks. The results from the baseline vector autoregressions suggest that shocks to the United States are significant for foreign activity. The paper also evaluates alternative explanations for the easy financing of the U.S. current account deficit in recent years.

The size and sources of international spillovers of activity remain subject to significant uncertainty. This Selected Issues paper uses a new approach to differentiating these effects using disturbances to a diverse group of small industrial countries as a proxy for global shocks. The results from the baseline vector autoregressions suggest that shocks to the United States are significant for foreign activity. The paper also evaluates alternative explanations for the easy financing of the U.S. current account deficit in recent years.

III. Summary of Globalization, Gluts, Innovation, or Irrationality: What Explains the Easy Financing of the U.S. Current Account Deficit?

1. This paper evaluates alternative explanations for the easy financing of the U.S. current account deficit in recent years. It starts by developing a portfolio balance model which traces out the impact of the global savings glut hypothesis, financial globalization, and financial innovation on bond yields and asset allocation across regions. It then takes the model to the data, to assess which explanations work best.

2. To do this, the paper constructs a comprehensive dataset from a range of sources on international bond markets and capital flows. The data cover bond yields, capital flows, overall foreign asset and liability positions, and size of bond markets, for the United States, other industrial countries, emerging market countries (including oil exporters), and Caribbean offshore centers. This allows the study of: (i) borrowing costs on a variety of bonds across industrialized countries; and (ii) asset allocation through a decomposition of the deterioration in the U.S. net foreign asset (NFA) position into parts which can be assigned to the aforementioned factors.

3. The analysis highlights the importance of bond flows in explaining the easy financing of the current account over the last decade. In particular, the analysis rejects the oft-heard conjecture that high expected U.S. productivity growth attracts inflows. This hypothesis is inconsistent with the facts that funding has occurred almost exclusively through fixed income markets and that U.S. equity prices are moderate. Rather, globally low long-term interest rates on government debt and tightening spreads on a variety of corporate bonds suggest that either the global savings glut or declining home bias abroad may have been important drivers (Figure 1).

4. A detailed decomposition of these bond flows lends particular support to declining home bias and financial deepening in other industrialized countries. These factors appear to explain a large share of the deterioration of the U.S. NFA position with respect to bonds, although financing from emerging market countries has also grown in recent years. Above and beyond their ability to explain emerging market country financing, U.S. financial innovation and the savings glut hypothesis (including difficult-to-track petrodollar recycling) are important as potential factors behind declining home bias in industrialized countries and a generally positive and often sizable residual in the decomposition of industrial country financing. This underscores the importance of not looking at these factors in isolation, but rather as a constellation of forces that can be self-reinforcing.

5. To the extent that financial deepening and declining home bias continue in industrial countries, it would appear likely that substantial financing will continue. One would certainly expect continued rapid growth in financial market capitalization in other industrialized countries as they, like the U.S., make increasing use of risk-transfer instruments, such as asset-backed securities and collateralized debt and loan obligations. Regarding home bias, many industrialized countries still have much to gain from further international diversification. Combined with innovative U.S. fixed income markets providing many assets which are simply not available elsewhere, this suggests that, at least for the immediate future, a significant portion of industrialized countries’ funds to be invested globally will be directed toward U.S. fixed income instruments.

7. In our view, however, financial deregulation and increasing investor sophistication in these countries is likely to maintain strong inflows to the United States. Financial deepening and falling home bias will provide a large pool of funds to be invested globally. For the same reasons as outlined for industrialized countries, and given the reserve currency role of the dollar and the level of investor protection that U.S. financial markets offer, a substantial portion of such funds should continue to go into the United States, albeit perhaps not into Treasuries.

8. To be sure, risks to continued easy financing of large U.S. current account deficits remain. In particular, while deep, liquid, and innovative U.S. fixed income markets should continue to attract foreign capital, they will have to carry on innovating more rapidly than other financial centers to retain a relative advantage. Moreover, markets do not appear to be factoring in the significant depreciation that is likely needed to keep the U.S. NFA position on a sustainable path. Precisely because it would be unexpected, a sharp change of market sentiment toward the dollar could force U.S. interest rates upward to sustain external financing, and thus cause financial turbulence. 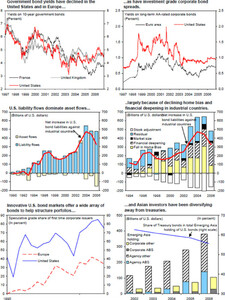